Breast cancer is the most frequently diagnosed life-threatening form of cancer in women and the leading cause of cancer deaths among women (1). The integration of genomics into the care of oncology patients has led to an increasing population of patients with breast cancer identified with germline mutations in breast cancer susceptibility genes, requiring physicians to integrate this information into treatment decision making (2). BRCA-associated breast cancer is the most common type in hereditary breast cancer, which can differ from sporadic breast cancer both in screening and prevention. However, it is still subject to debate on whether surgical management is also different. Breast-conserving therapy (BCT), breast-conserving surgery (BCS) followed by radiotherapy, is now widely accepted in China for breast cancer patients with unknown gene mutation status. However, BCT remains a relative contraindication to patients with breast cancer with a known or suspected genetic predisposition due to concerns about an increased risk of ipsilateral disease, breast recurrence or contralateral breast cancer, as reported in the National Comprehensive Cancer Network guidelines version 2.2020 (3,4). Even the Society of Surgical Oncology Guideline (2) still moderately recommended BCT to those patients meeting the eligibility. Although long-term follow-up data of the early trials have shown that BCT is associated with a higher rate of local recurrence, no differences in survival were found compared with mastectomy (5-8). Also, the risk of local recurrence has decreased in recent years (9-11).

A genetic test is not as common in China as in western countries. Chinese breast cancer patients with unknown BRCA mutation status have received standard surgical management if eligible, including BCS and mastectomy. Among them, those with BRCA1/2 mutation indeed have received BCS, followed by radiotherapy. Thus, whether BCT is a safe and rational choice for breast cancer patients carrying a mutation in the BRCA1 or BRCA2 gene is still unknown.

This study aims to compare the prognostic impact of the two different types of surgery both in BRAC1/2 mutation carriers and noncarriers with breast cancer, BCT (BCS followed by radiotherapy) and mastectomy. The results will yield more direct and convincing conclusions that BCT is a safe choice for the surgical management of Chinese female patients with breast cancer and BRCA1/2 mutations. Thus, finding BRCA1/2 mutation status is unnecessary for the choice of surgical management.

We present the following article in accordance with the STROBE reporting checklist (available at http://dx.doi.org/10.21037/gs-20-531).

All the procedures performed in this study involving human participants were conducted following the ethical standards of the institutional and national research committees and with the 1964 Declaration of Helsinki and its later amendments or comparable ethical standards. The study was approved by the Ethics Committee of Peking Union Medical College Hospital (No. ZS 1655), and written informed consent was obtained from all participants.

Eligible for a genetic test of BRCA1/2 mutation status, a total of 490 Chinese women with primary invasive breast cancer treated with either BCT or mastectomy were recruited from three centers, Peking Union Medical College Hospital, Sun Yat-sen University Cancer Center and Cancer Hospital of Chinese Academy of Medical Sciences, between January 2016 and April 2020. All the patients have been confirmed BRCA1/2 mutation status. Patients with a diagnosis of ovarian cancer, except for patients with no ovarian cancer recurrences and ≥10 years elapsed after ovarian cancer diagnosis before breast cancer, were excluded.

At last, stratifying on BRCA1/2 mutation status, the BRCA1/2 mutation carriers and noncarriers were analyzed on clinical pathological characteristics, breast cancer disease-free survival, recurrence-free survival (RFS) and breast cancer-specific survival comparing BCT with mastectomy (without radiotherapy or followed by radiotherapy). Current analyses are for follow-up information through April 30, 2020. The TNM stage was classified according to the American Joint Committee on Cancer 8th edition.

Screening for BRCA1/2 mutations was performed by analyzing genomic DNA extracted from the patients’ peripheral blood and capturing targeted sequences followed by high-throughput sequencing. Quality control of the raw data was performed, followed by removing duplicated reads. Clean data were aligned to the hg19 reference genome using variants obtained by GATK 4.0. Further, the ExAC filtered the variants, the 1,000 Genome project. The filtered variants included untranslated region variants, intronic variants, splicing variants, and exotic variants. All harmful mutations were confirmed by Sanger sequencing in duplicate. Pathogenic mutations and pathogenic mutations are defined as mutations that lead to a truncated protein or that have previously been reported as disease-associated.

Clinicopathological characteristics were evaluated for an association with the type of surgery within these subgroups, using the Pearson Chi-square test or the Mann-Whitney U test.

Subgroup survival curves were generated via the Kaplan-Meier method to explore the effects of the different types of surgery on survival for BRCA1/2 mutation carriers and noncarriers. Kaplan-Meier univariate analyses and multivariate Cox regressions were used. Factors at or close to a P<0.05 in the univariate analysis, together with some critical clinical confounders (13,17), were used to perform the multivariate Cox regression to compare survival between different types of surgery both in BRCA1/2 mutation carriers and noncarriers. Factors included for the multivariable analysis were age at diagnosis (≤35, 36–45, and >45 years), tumor size (≤2, 2–5, and >5 cm), TNM stage (0 or, I stage, II stage and III stages), estrogen receptor (ER) status (positive/negative), and systemic treatment for the first breast cancer. That is, chemotherapy (no/yes), endocrine therapy (yes/no) and radiotherapy (no/yes) (12).

All statistical analyses were done with SAS version 9.4 (Cary, NC, USA). All statistical tests were two-sided, and a probability level with a random difference of P<0.05 was considered statistically significant. 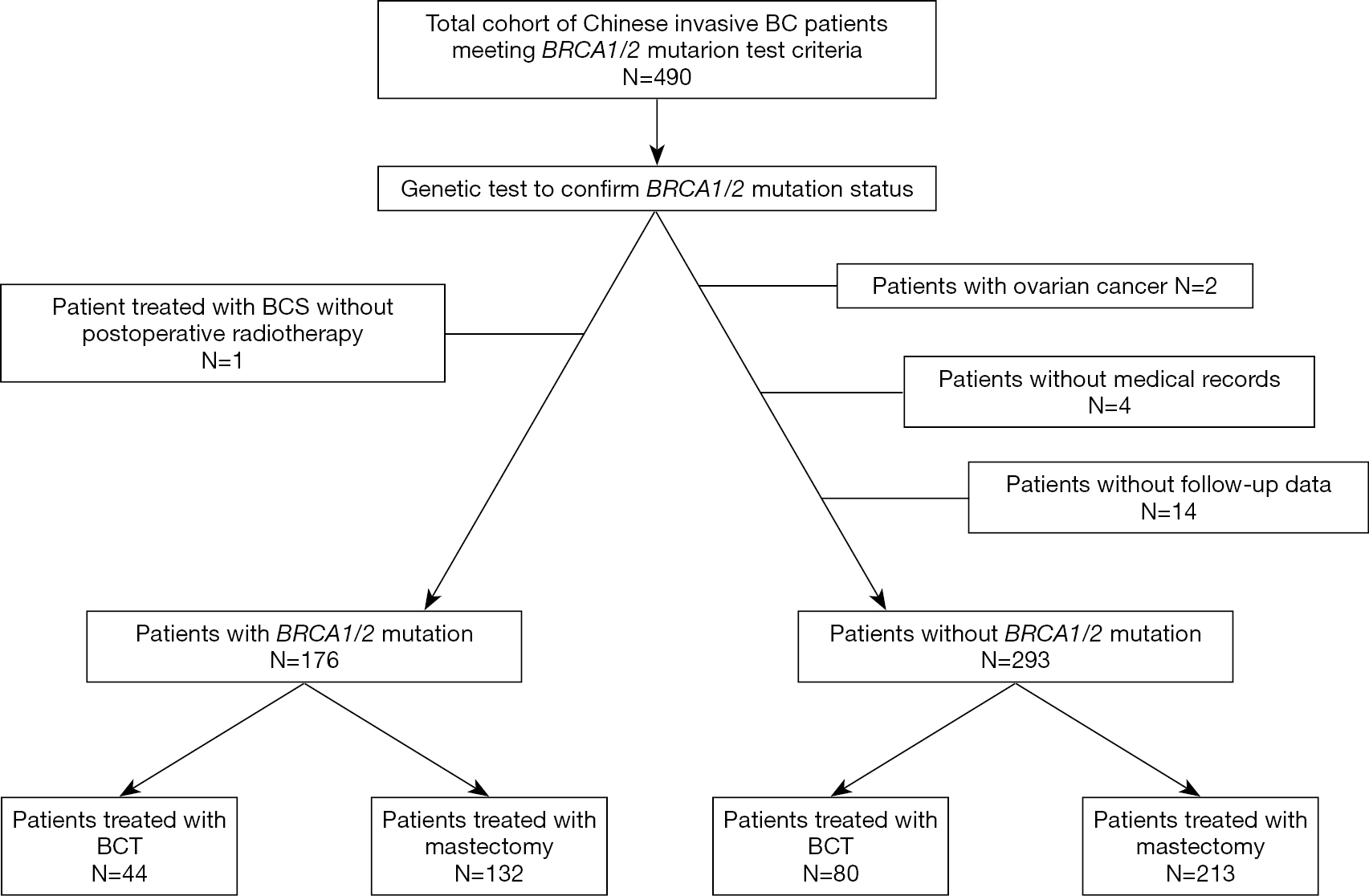 Figure 1 Flow diagram of the patients in the study and analyses. 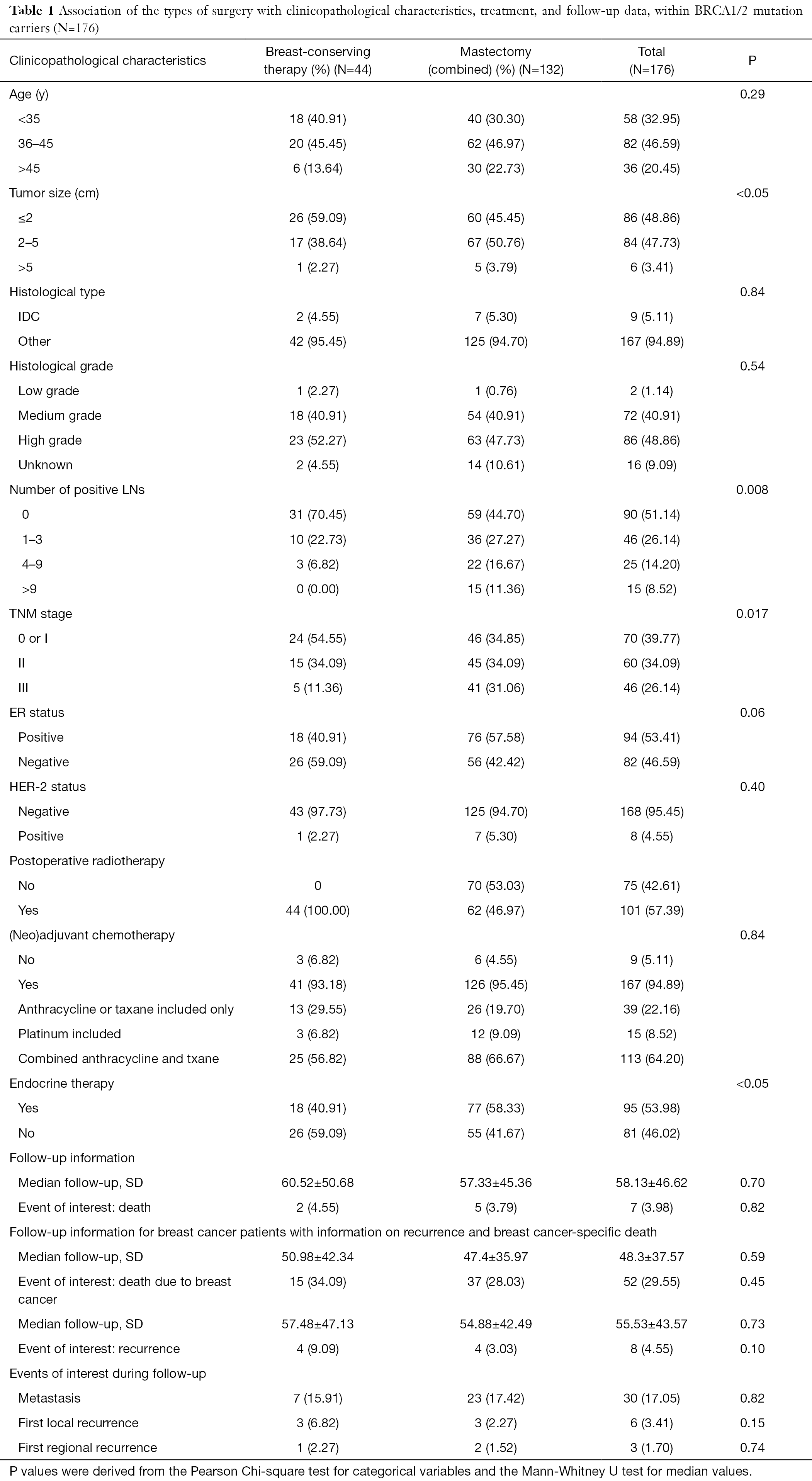 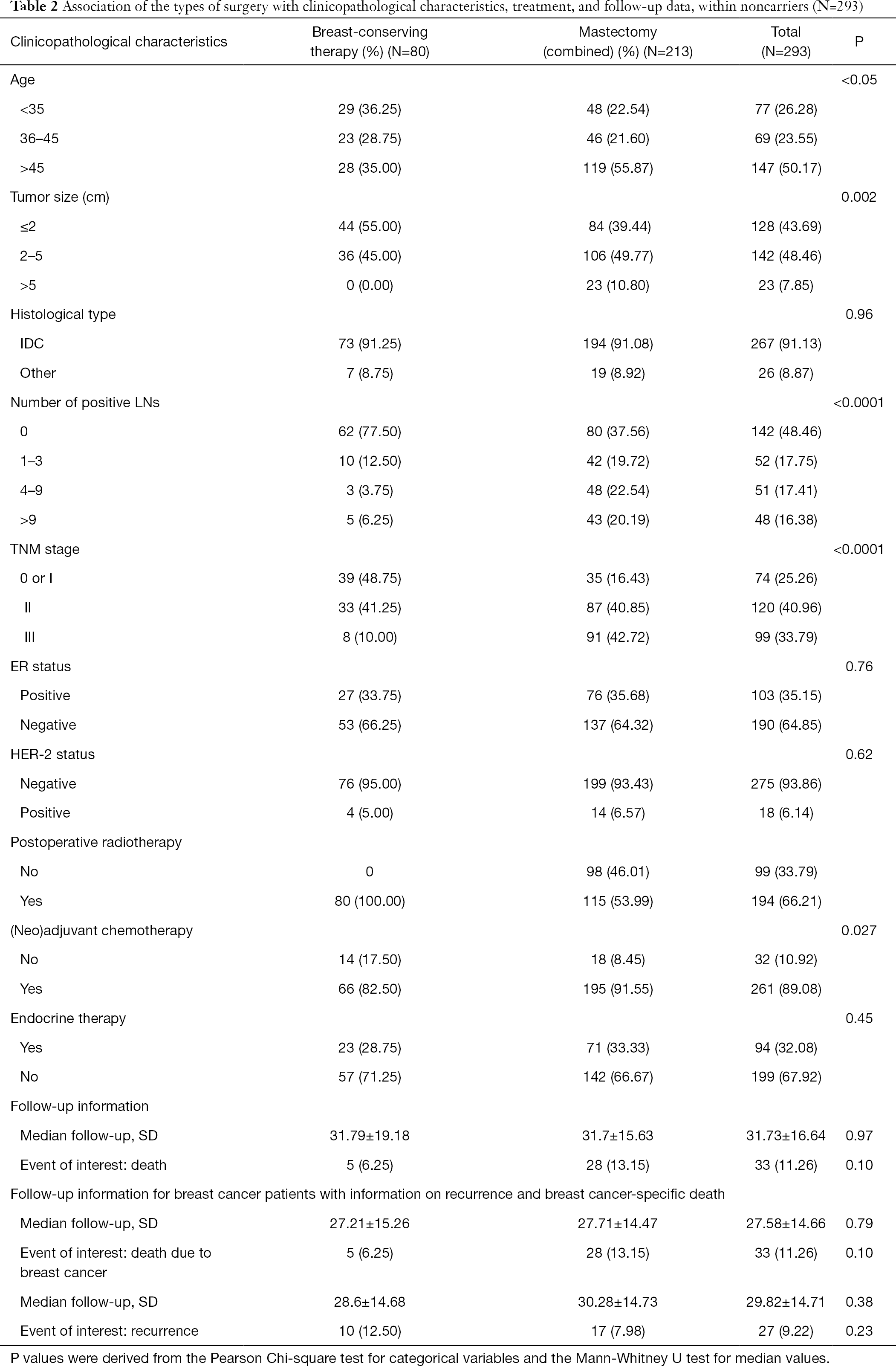 Table 2 Association of the types of surgery with clinicopathological characteristics, treatment, and follow-up data, within noncarriers (N=293)
Full table

Table 5 Recurrence free survival, of patients by the type of surgery, within BRCA1/2 mutation carriers and noncarriers (N=469)
Full table

Although local recurrence risk was estimated to increase in the BCT group (5,6,19), more and more studies reported there was no increased recurrence for BRCA1/2 mutation carriers (20,21), this was following the result of our studies. Two studies were reporting an unadjusted worse survival for BRCA1/2 mutation carriers (22-24), and another two studies did not find a survival difference (24,25). As we showed, 5-year cumulative RFS was similar, comparing BCT to mastectomy. The reason that why recurrence risk decreased in recent years may be due to the improvement of breast-conservation and radiotherapy technology. Furthermore, even if an increase in recurrence risk, it still could not result in a loss of survival; additionally, the literature shows patients who undergo BCT have better survival than patients who undergo mastectomy (26). Current Dutch guidelines recommend BCT as a more suitable management option for early invasive breast cancer compared with mastectomy (27).

We observed a suggestion for a slightly better, though nonsignificant, breast cancer-specific survival for BCT than mastectomy in noncarriers, even when adjusting for clinical-pathological characteristics and systemic treatment. The same results were also reported in the general breast cancer population ever before (28-30). As the breast remained in the patients who received BCT, the risk of ipsilateral and contralateral breast cancer increased. Therefore, better survival could not be observed in the BCT group compared to the mastectomy group within BRCA1/2 mutation carriers.

Guidelines recommend some contradictions for BCT, including tumor size and specific tumor and patient characteristics. For example, active connective tissue disease involving the skin was considered a relative contradiction (3).

Our results also showed that patients who received mastectomy had prognostically worse tumor characteristics, including larger tumor size, more advanced TNM stages and more positive lymph nodes. However, survival was still equal between different surgical management groups. Systemic therapy played an important role. As we showed, patients treated with mastectomy received endocrine therapy more often within carriers and chemotherapy more often within non-carriers which was also observed by van den Broek et al. (13). In accordance with the guidelines, tumor size was still the most important factor to be considered for BCT. In addition to that, TNM stage and the status of lymph node were still needed to be considered. Actually those factors in consideration for BRCA1/2 carriers were consistent with sporadic breast cancer patients. Before genetic testing, all patients received the standard systemic treatment, including chemotherapy and radiotherapy, according to the indication for sporadic breast cancer.

Although substantial amounts of data are available for patients in our cohort, insufficient adjustment of our risk estimates may-have occurred due to different characteristics of our treatment subgroups (Tables 1,2). BCS, followed by radiotherapy, is well known as the standard management compared with mastectomy for sporadic breast cancer (31). All patients in this study received radiotherapy after BCS, which accounts for the significant difference in whether radiotherapy was administered to patients in either group (BCT and mastectomy).

Although our cohort has stratified on BRCA1/2 mutation status and compared prognostic impact directly on BCT compared to mastectomy, follow-up was still not enough. Except for that, insufficient stratification on BRCA1 and BRCA2 mutation type, more precise conclusions cannot be conducted. Due to the low rate of BCT in both BRCA1/2 mutation carriers (25%) and noncarriers (27.35%), survival analysis cannot be conducted with the ratio 1 to 1. Therefore, bias may be introduced to some degree. Moreover, only female patients were included in this study. Thus, the results and conclusions may only be proper for female patients with breast cancer with BRCA1/2 mutations.

In summary, by comparing the survival between BCT and mastectomy among Chinese breast cancer both within BRCA1/2 mutation carriers and noncarriers, our results confirm BCT is a safe surgical treatment to offer to BRCA1/2 mutation carriers for the Chinese population. Because all the patients received BCS followed by radiotherapy, adjuvant radiotherapy is necessary after BCS. Due to differences in clinicopathological characteristics between the two groups, tumor size, TNM stage and number of positive lymph nodes should be considered when selecting surgical management for Chinese female patients with breast cancer with BRCA1/2 germline mutations.

Funding: This study has been supported by the Fundamental Research Funds for the Central Universities (3332019027), the National Natural Science Foundation of China (81802669 to JL) and CAMS Initiative Fund for Medical Sciences (2016-I2M-1-001 to XW).

Reporting Checklist: The authors have completed the STROBE reporting checklist. Available at http://dx.doi.org/10.21037/gs-20-531

Conflicts of Interest: All authors have completed the ICMJE uniform disclosure form (available at http://dx.doi.org/10.21037/gs-20-531). The authors have no conflicts of interest to declare.

Ethical Statement: The authors are accountable for all aspects of the work in ensuring that questions related to the accuracy or integrity of any part of the work are appropriately investigated and resolved. All the procedures performed in this study involving human participants were conducted following the ethical standards of the institutional and national research committees and with the 1964 Declaration of Helsinki and its later amendments or comparable ethical standards. The study was approved by the Ethics Committee of Peking Union Medical College Hospital (No. ZS 1655), and written informed consent was obtained from all participants.