At present, the main clinical treatment for DTC is surgery. The prognosis in most DTC patients is good, but about 30% of these patients experience relapse and metastasis, which could worsen the prognosis (8). Therefore, there is a need to improve the surgical prognosis for this disease. Different scoring systems have been used to determine the prognostic stratification in the assessment of cancer-specific mortality (CSM) risk (9-11). The age, grade, extent, and size (AGES) scoring system includes the age at diagnosis, histologic grade, extrathyroidal extension, distant metastasis (DM), and tumor size (10); the DM, patient age, completeness of resection, local invasion, and tumor size (MACIS) score includes DM, age, completeness of surgical resection, invasion, and tumor size (11); and the age, metastasis, extent, and size (AMES) scoring system includes age, DM, extent, and tumor size (9). The tumor, node, metastasis (TNM) staging system is one of few scoring systems to include lymph node metastasis (LNM) and DM. The modifications proposed in 2015 ATA Guidelines include different histologic subtypes, LNM and DM (12). However, no scoring system to date has included histology subtype, LNM, DM and the synergic effects among the three factors (13). Based on the presence of some risk factors affecting DTC prognosis, patients can be categorized in different risk groups to predict the chance for tumor recurrence or mortality. Such classification can help in creating more precise diagnostic and treatment approaches, and help in defining the prognosis for DTC in any patient.

The purpose of the present study was to determine the significant clinicopathological risk factors associated with DTC prognosis, through the collection of relevant clinical data and exploration of the interaction of relevant independent risk factors on survival outcomes and to evaluate whether histology subtype, LNM, and DM affect DTC prognosis and whether there were synergic effects of these factors on the prognosis of DTC. We present the following article/case in accordance with the STROBE reporting checklist (available at http://dx.doi.org/10.21037/gs-20-273).

We conducted a retrospective cohort study using data from the SEER database, a database containing demographic, clinicopathological, and treatment-related characteristics of cancer patients. The study did not require an ethical review and no informed consent was required because of the publicly available data of this study. Our search included patients with thyroid carcinoma originating from thyroid follicular epithelial cells, from January 2004 to December 2013 were included. All included patients were followed-up until December 2013. 13134 Cases with missing or incomplete survival data were excluded, resulting in a total of 86,032 DTC patients who were eligible for the analysis (Figure 1). The following information were extracted: demographic variables including age at diagnosis (<55 or ≥55 years), race (white, black, other), and sex (male or female); cancer-related clinicopathological characteristics including T stage (≤4 or >4 cm), N stage (N0 or N1 stage), DM (M0 or M1 stage), multifocality, histology type (PTC or FTC), and extrathyroid extension; and treatment characteristics including radiotherapy (none or refused, radiation beam or radioactive implants, radioisotopes or radiation beam plus isotopes or implants) and surgery (none, lobectomy, subtotal or nearly total thyroidectomy, total thyroidectomy). 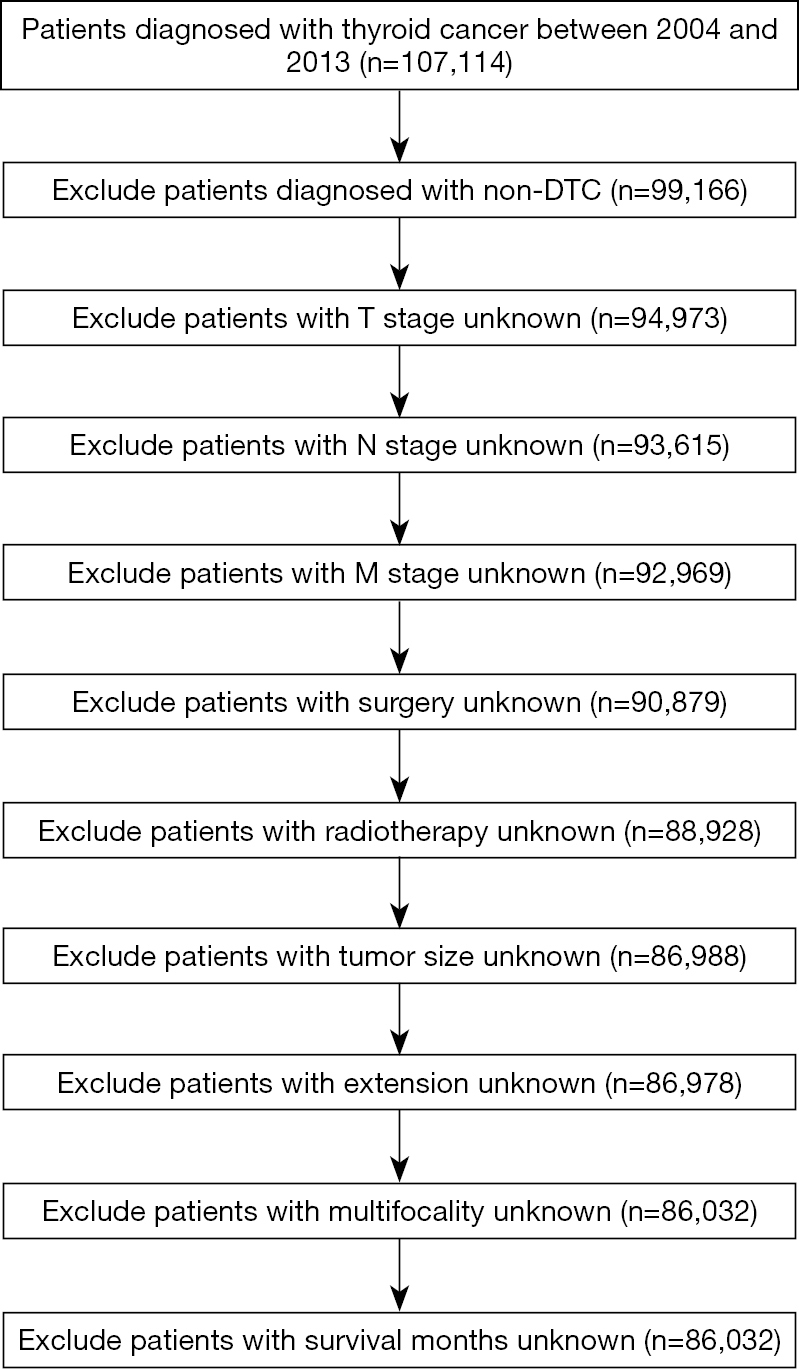 The two main outcomes we used to represent prognosis in our study were CSM or cancer-specific survival (CSS) and all-cause mortality (ACM) or overall survival (OS). Cases without data on survival duration or with incomplete follow-up duration data were eliminated from our study.

Quantitative variables were presented as mean ± standard deviation, while categorical variables were presented as percentages. Univariate and multivariate Cox regression analyses were employed to determine any association between CSS and all-cause survival (ACS) and the following variables based on the calculated hazard ratios (HRs) and their 95% confidence intervals (CIs). These variables were age, year, sex, race, TNM stage, multifocality, tumor type, extrathyroidal extension, radiation, and surgery. Kaplan-Meier analyses with log-rank tests were used to determine the association between the variables and the prognosis of DTC after adjustment for confounding factors.

General characteristics of the study population

Risk factors associated with CSM and ACM in DTC 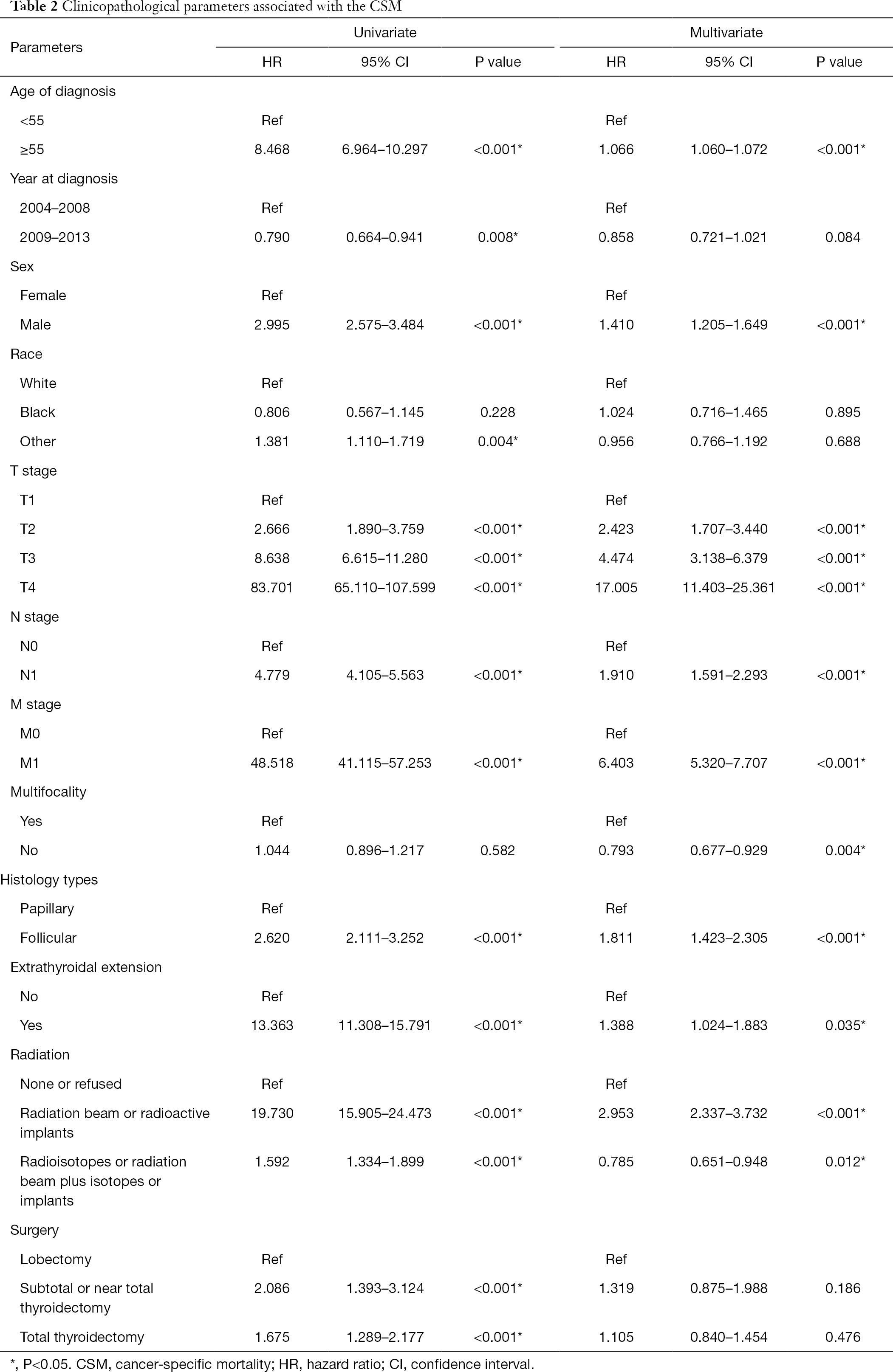 Similarly, for ACM, univariate and multivariate Cox regression analysis indicated that FTC type, positive LNM and DM (all P<0.001) were independent risk factors after adjustment for other confounders (Table S1). 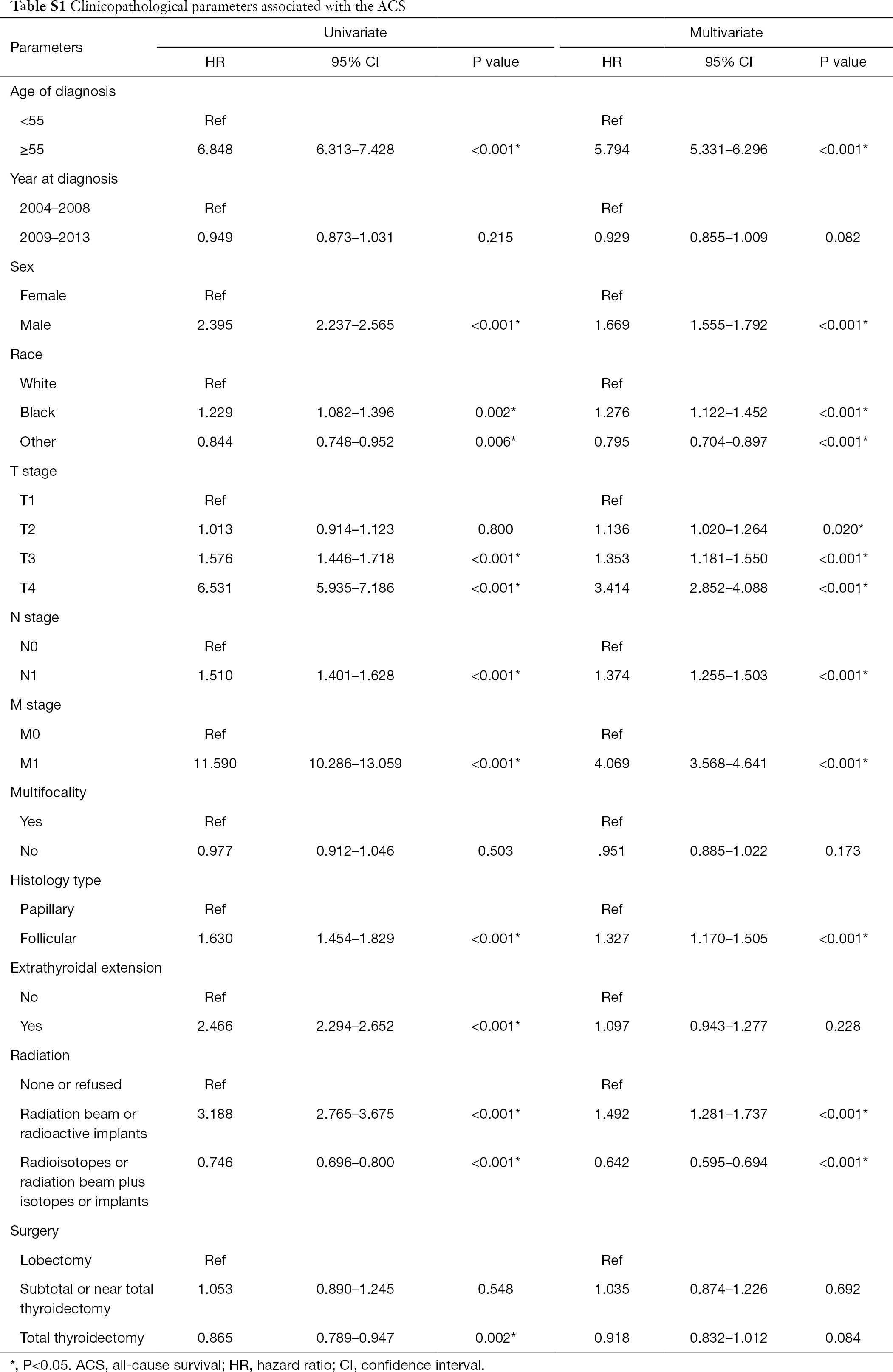 CSM and ACM rates per 1,000 person-years 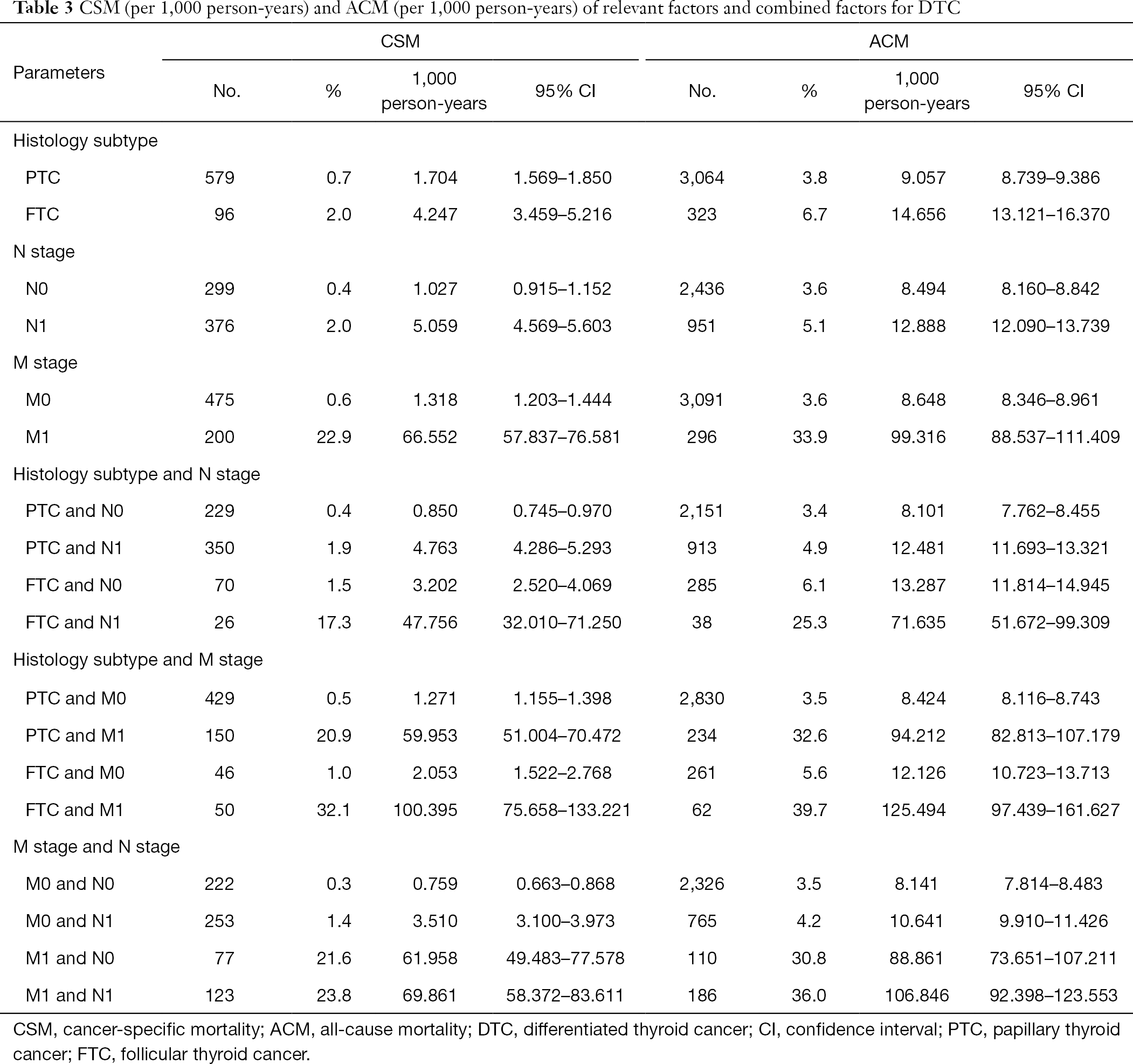 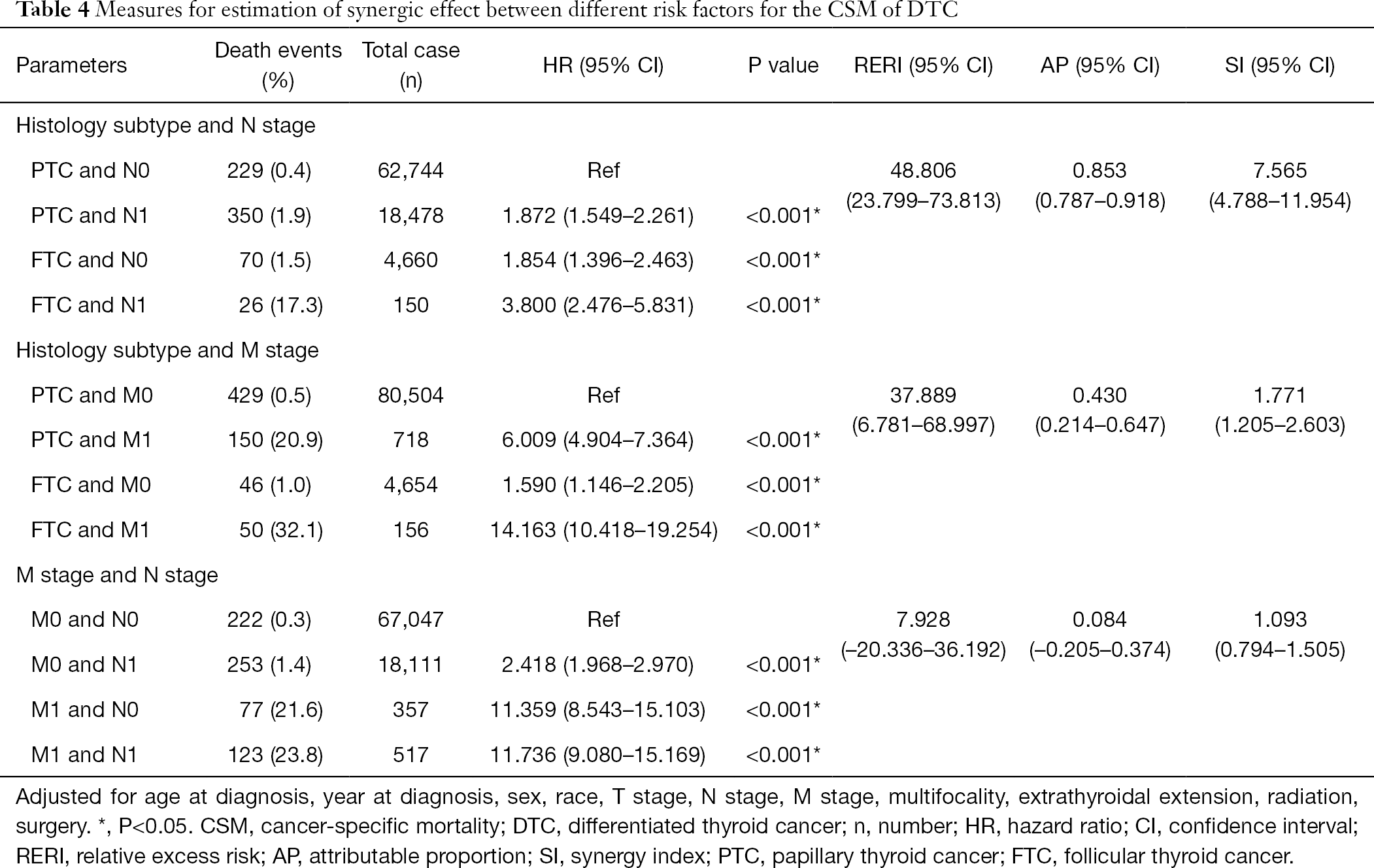 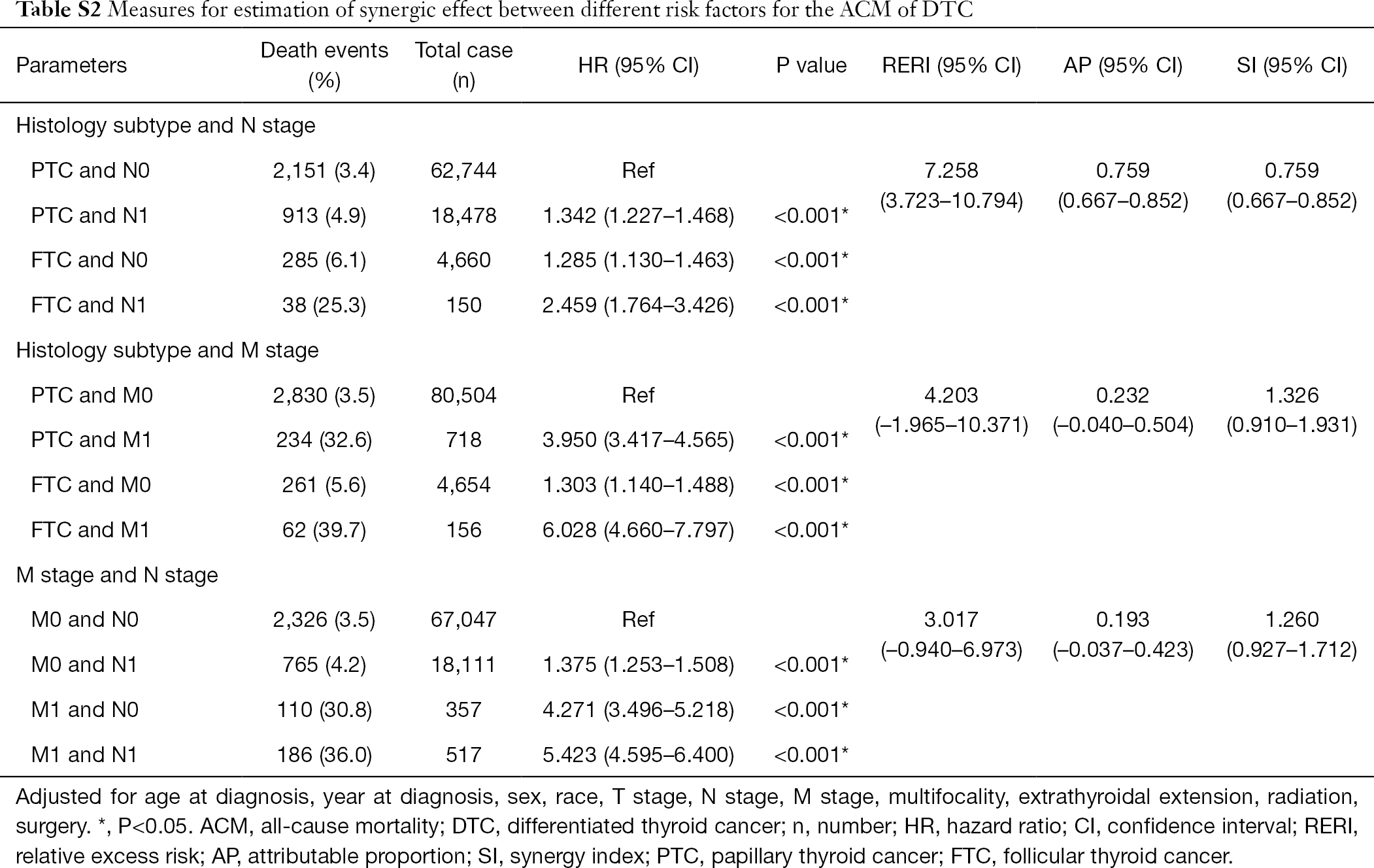 In terms of histology subtype and M stage combinations, the probability of CSM was the greatest in patients with FTC and M1 stage disease (HR =14.163; 95% CI: 10.418–19.254, P<0.001) compared to those with other combinations, after adjustment for other confounders. The probability of CSM was greater in patients with PTC and M1 or FTC alone compared to those with PTC and M0 stage after adjustment for confounders. Based on the abovementioned results, the RERI was 37.889. The AP was 0.430. Moreover, the SI was 1.771. The aforementioned results indicated that a significant synergic effect between histology subtype of FTC and M1 stage on CSM exists (Table 4). However, in terms of ACS, there was no synergic effect between histology subtype and M stage on ACM (Table S2).

Similarly, we calculated and compared the RERI, AP and SI values between cases with different N stages and M stages to determine CSM (Table 4) and ACM (Table S2). The 95% CIs for RERI and AP contained ‘0’ and that for SI contained ‘1’, either for CSM or ACM. Therefore, we concluded that there was no interaction between N stage and M stage.

Kaplan-Meier analysis of survival in DTCs

Many studies had reported risk factors associated with DTC death. However, the relationship between risk factors and tumor-related mortality remains to be clarified for DTC. In the present study, we divided DTC patients into subgroups of PTC, FTC, N0 stage, N1 stage, M0 stage and M1 stage to evaluate differences in their clinicopathologic features and oncological outcomes. According to the multivariate regression analysis, we found that histology subtype, N stage and M stage were associated with a mortality due to both cancer-specific and all-cancer reasons, which is consistent with the findings in previous reports (12,14), the Kaplan-Meier analysis of survival of DTCs confirmed our findings again.

Although the influence of LNM on the prognosis of thyroid cancer remains controversial, previous studies have reported that while LNM may affect recurrence in thyroid cancer, it does not affect survival (19,20). For both the seventh edition and eighth editions of AJCC TNM classification system, multivariate analyses have demonstrated that the presence of cervical LNM did not predict worse survival (4). Besides, not all large case-control studies have suggested that LNM was among the primary factors associated with higher morbidity for thyroid cancer (18). Vuong et al. (21) reported that male sex, vascular invasion, extrathyroid extension, and LNM were independent risk factors for DTC. In our study, univariate analyses showed that age at diagnosis, sex, T stage, extrathyroid extension, radiation, surgery, N status, DM, and histology type were predictive risk factors for CSS in DTC. Particularly, we found that the presence of a positive N stage (P<0.001) led to worse CSS, similar to the findings of Suman et al. (22).

While DM does not commonly occur in DTC, it adversely impacts mortality. In this study, we found that the incidence of DM in DTC was 1.0%, and the CSM rate in patients with DM was 48.518 times higher than that in patients without DM. DM as a prognostic factor for CSM in patients with DTC has been widely studied (21,23-25). The 10-year OS rate associated with DTC is 85–93%; however, if DM occurs the 5-year OS rate may drop to 50% (26,27). A recent study concluded that the presence of bone metastases in DTC was associated with lower OS (28), consistent with our findings.

DM is more commonly seen with FTC than PTC. In PTC, DM is predominantly confined to the lung tissue, while in FTC extrapulmonary metastases were more common and the incidence of bone metastasis was significantly higher than that for PTC (7–20% vs. 1–7%) (29). A previous study reported that the prognosis of thyroid cancer patients with simple pulmonary metastasis was better than those with extrapulmonary metastasis. This was because the I131 radiation sensitivity in patients with pulmonary metastasis was reportedly higher than that in those with bone metastases (16) resulting in a better prognosis for patients with PTC than those with FTC. This was consistent with our findings. On the other hand, studies had shown different molecular profiles of tumor that metastasized to different organs leaded to different prognosis (30,31). Therefore, it can be further speculated that the association between histology type and prognosis in DTC, may be caused by the different molecular profiles between FTC and PTC, which may affect the site of DM. Further studies on the molecular profile of DTC need to be conducted to confirm the aforementioned findings.

To the best of our knowledge, no study to date has focused on the possibility of a synergic effect between clinicopathological characteristics and prognosis in DTC. In the present study, we divided each of the three risk factors (histology subtype, N status and M stage) into two subgroups, and then every four subgroups of two risk factors were paired for the calculation of RERI, AP and SI to assess the additive interaction among the three risk factors. We found that, except for the N stage and M stage combinations, the other two combinations (histology subtype of FTC and N1 stage, histology subtype of FTC and M1 stage) had a significant synergic effect on DTC prognosis for CSM. Our study suggested that histology subtype and N stage had a synergic effect on the prognosis of DTC as did histology subtype and M stage for CSM. In other words, patients with FTC and LNM or DM had a higher rate of CSM than those with one or no risk factor. However, no significant increases in CSM rate were observed in the presence of LNM and DM. Existing risk stratification systems are tightly based on the impact of individual risk factors on tumor prognosis, we investigated whether there were synergic effects between some risk factors, which could lead to a more accurate rating of risk stratification. Based on the results, FTC patients with LNM or DM can be directly classified as high-risk. This may add some credibility to the current risk stratification system and may provide some references for clinical treatment of thyroid cancer. For DTC patients with signs of LNM and DM preoperative, our findings may have some implications for them, including potential changes in surgical procedures and potential radiation therapy may be required.

This study has some limitations. First, the SEER database lacks detailed information on recurrence and surgery-related complications of DTC, so these factors could not be considered. Second, we did not assess or consider the patients’ family history, vascular invasion, or other histology characteristics. Third, there were no information on whether patients underwent surgery more than once in the SEER database, leading to possible result bias. Fourth, the lack of information on the histological subtypes of PTC and FTC leaded our results incomplete. Fifth, another important limitation was the absence of data on the location of metastases (lung, bone, others), as well as the chronology of distant metastases (synchronous, metachronous). Fifth, the SEER database does not record the exact radioiodine doses and the total cumulative activity of radioiodine of a patient received. The number of radioiodine doses received and the total cumulative activity of radioiodine are important prognostic factors that should be taken into account.

Reporting Checklist: The authors have completed the STROBE reporting checklist. Available at http://dx.doi.org/10.21037/gs-20-273

Conflicts of Interest: All authors have completed the ICMJE uniform disclosure form (available at http://dx.doi.org/10.21037/gs-20-273). The authors have no conflicts of interest to declare.

Ethical statement: The authors are accountable for all aspects of the work in ensuring that questions related to the accuracy or integrity of any part of the work are appropriately investigated and resolved. The study did not require an ethical review and no informed consent was required because of the publicly available data of this study.