Surgery chemotherapy for ovarian cancer recurrence: what is the best treatment option

Ovarian cancer is the third most frequent and the leading cause of death from gynecological cancer (1). Twenty-two thousand five hundred new cases every year are diagnosed in the United States and more than half of these patients will relapse at 5 years after the first treatment (2).

Over the years, research on primary and maintenance treatments has made important steps forward, increasingly prolonging the disease-free interval and the time of recurrence (3,4). The use of Poly (ADP-ribose) polymerase (PARPS)-inhibitor has greatly contributed in this direction (5).

Although the time of recurrence has been delayed, the return of the disease seems inevitable, especially for the advanced stages, and this poses the question the best recurrence treatment.

Nowadays, the best treatment option for ovarian cancer recurrence is often subjective, can vary in the different centers and depend on personal experience (6).

International guidelines help to direct the patient towards chemotherapy rather than surgery. Despite this, the guidelines also do not show studies with a high level of evidence (7). The absence of a unanimous consensus comes from the enormous variability of conditions that can be related to recurrence (8-10).

The overall survival (OS) ranged from 5 to 24 months in relation to the number, size, and location of the relapse (11). Furthermore, the type of primary post-treatment chemotherapy, BRCA-status, and the residual tumor after primary debulking surgery are extremely variable, and all these factors make the patients’ eligibility criteria particularly hard to satisfy (12).

Over the years, Arbeitsgemeinschaft Gynaekologische Onkologie (AGO)-DESKTOP studies have identified a population of patients who could benefit from secondary surgery (13). In patients with positive AGO-score (complete resection at first surgery, good performance status, and absence of ascites >500 mL), secondary surgery with no macroscopic residual disease would be achievable (14).

On the other hand, in case of progression disease, stability or recurrence after less than 6 months after completing prior chemotherapy, second-line chemotherapy seems to be the treatment of choice (7). Again, the level of evidence is low, and survival varies enormously depending on the type of drug or the chemotherapy regimen used (15).

The results of the Gynecologic Oncology Group (GOG)-0213 study were recently published and showed no advantage in terms of OS in patients with platinum-sensitive recurrent epithelial ovarian undergoing secondary cytoreductive surgery (SCS) compared to chemotherapy alone (16). Despite not medically fit for surgery, diffuse carcinomatosis, ascites, or extra-abdominal disease cases were excluded from surgery, only 67% of patients achieved complete surgery. This testifies to the importance of correct patients’ selection who can really benefit from SCS (17).

Interestingly, in recent years Marchetti et al. have been focusing on BRCA status and the use of PARP-inhibitors (18). Recent evidence shows that BRCA wild type patients can benefit from SCS, while BRCA 1/2 mutated patients’ prognosis is more linked to molecular factors rather than surgery (12,19). In this scenario, arises the need for personalized therapy based on the patient’s characteristics.

Given the patients’ heterogeneity and the lack of high-level evidence, the aim of this narrative review is to summarize the best aspects that can make ovarian cancer recurrence patients suitable for SCS.

A narrative review analyzing all the literature of the past 30 years has been performed. All non-English articles have been excluded. The following keywords were searched: ‘recurrent ovarian cancer’, ‘secondary surgery’, ‘secondary cytoreductive surgery’, ‘platinum-sensitive ovarian cancer’, ‘platinum-resistant ovarian cancer’. PubMed, Scopus, Web of Science and Ovid Medline were used for research. For all full-text manuscripts, reference lists were analyzed to find additional eligible studies. Articles with best scientific evidence such as randomized and non-randomized clinical trials, case series, case-control studies, cohort studies were selected.

The electronic database search provided a total of 284 results. Ninety-eight studies were excluded because not relevant. In addition, 41 reviews, 93 case reports, and 14 written in non-English language articles were not considered in the analysis (Figure 1). A total of 38 studies were considered eligible for the review. A double-blind search was performed by the authors CVA and RA. The research was completed in January 2020. 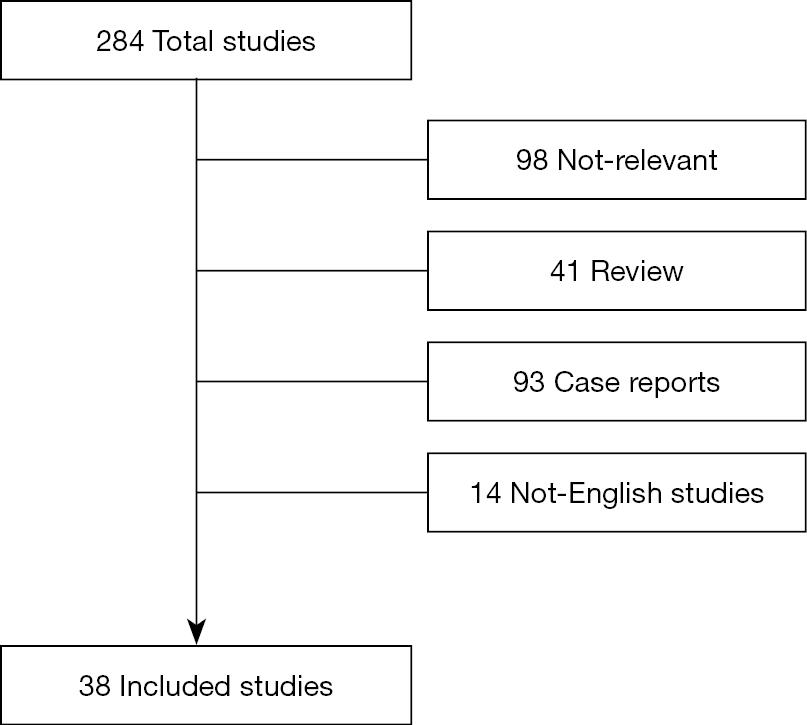 Based on the main results in the literature, secondary surgery only makes sense in ovarian recurrent patients with several characteristics. For this reason, we divided eligible patients for secondary cytoreduction in relation to the following factors: platinum-sensitivity; AGO-score or Tian model; Unresectable lesions; surgical generic contraindication; woman’s personal choice.

The main determinants of ovarian cancer patients’ prognosis are platinum sensitivity and residual tumor after surgery (6). Classically Platinum sensitivity was defined as no recurrence within 12 months after the completion of first-line platinum-based chemotherapy. Over the years the same definition ‘platinum-sensitivity’ has changed and has been questioned in the Fifth Ovarian Cancer Consensus Conference (20). Furthermore, tumor growth kinetics may be different in the various tumor histotypes, and the 6-month cut-off may not be sufficient to state the real response to platinum (21).

Most of the studies in the literature reserve secondary surgery for platinum-sensitive patients (11,22-24). Chi et al. showed different survival of SCS patients based on platinum sensitivity (11). Furthermore, on multivariate analysis, the median survival was 30 months for a disease-free interval of 6 to 12 months, and 51 months for a disease-free interval >30 months (P=0.005) in patients underwent SCS.

In platinum-resistance, persistence or progression disease, the patient’s prognosis remains poor with a median OS of 12 months and a response rate to chemotherapy of 15% (25).

Few studies and with poor cases showed OS improvement (32 vs. 8 months) in single site platinum-resistant recurrence underwent SCS (26-28). These results remain reliable only in selected cases and in cancer reference centers. However, in most cases, platino-resistant recurrence appears as multiple locations, and an absent residual tumor after surgery is often unreachable (29).

The recent DESKTOP III study demonstrated improved Progression-Free Survival (PFS) and decreased time to first subsequent therapy in patients with positive AGO-Score undergone SCS for first recurrent ovarian cancer (13). OS results are still ongoing, therefore this aspect cannot be analyzed. As with primary debulking surgery, these results are reliable for recurrent patients who reach an absent residual tumor at the end of surgery (30).

Therefore, even in SCS the objective is the absence of macroscopic disease at the end of surgery.

The concept behind this result is that gross residual tumors have poor vascular support, thus chemotherapy is less effective (31). In this sense, small lesions are most easily reached by chemotherapy and are related to a better prognosis.

Over the years, the AGO group studies had not only confirmed Bristow’s results but also developed a score to select patients more likely to achieve complete resection (13,14,32).

In case of positive AGO-score, there is a high probability that a complete surgery may be reached. Patients with positive AGO-score had complete cytoreduction at primary debulking surgery, have good Eastern Cooperative Oncology Group (ECOG) status and have less than 500 mL of ascites on recurrence. However, it should be noted that 40% of patients with negative AGO-score achieved absent residual tumor after SCS. This aspect showed that AGO-score does not affect patient’s inoperability.

Tian et al. also developed a score similar to the AGO-score (33). In 2012 the authors proposed a score based on six factors: FIGO stage (I/II vs. III/IV), progression free interval (<16 vs. ≥16 months), CA125 (≤105 vs. >105 U/mL), ECOG performance status (0–1 vs. 2–3), ascites at recurrence (absent vs. present) and residual disease after primary surgery (0 vs. >0 mm) (33). In case of low-risk patients (score <4.7) there is a higher probability to achieve complete cytoreduction. van de Laar et al. subsequently confirmed that both scores showed a high positive predictive value with relatively high false-negative rates (34).

We would still highlight that both scores identify a subset of patients who could achieve complete cytoreduction, but don’t select patients who are candidates for surgery compared to chemotherapy.

In the best patient selection, a fundamental role lies in the diagnostic process. The time of relapse diagnosis and the lesions’ site are essential to avoid unnecessary surgery for the patient. Fagotti et al. investigated the best diagnostic and staging strategy for recurrent ovarian cancer (35). The combination of FDG-PET/CT and staging laparoscopy showed significantly higher diagnostic accuracy than the two techniques considered separately. The combined evaluation had a negative predictive value of 88.9% and a sensitivity of 95.3%. In addition, the authors stress the advantage of diagnostic laparoscopy in identifying the number and the pattern of recurrences. As shown by Ferrandina et al., the carcinomatosis-like pattern of recurrence was associated with unfavorable outcomes (36).

Furthermore, it is reasonable that the unresectable lesions for primary ovarian cancer are also unresectable for relapses, as in the case of multiple liver metastases, mesenteric retraction or diffuse bowel carcinosis (37). Finally, the number of relapses negatively impacts survival and absent residual tumor at the end of surgery (38).

Havrilesky et al. first showed that patients with ovarian cancer recurrence prefer a lower progression-free survival for better quality of life (42,43). Although the psychological aspect is recognized as a fundamental factor for the patient’s well-being, few studies and little attention is focused on this aspect (44). In a state where a distinct advantage of chemotherapy over surgery is not yet so clear, the patient’s personal choice should be carefully considered.

Despite the recent GOG-0213 trial showed that SCS followed by chemotherapy did not result in longer OS than chemotherapy alone, opinions still differ on surgery’s usefulness. The selection of truly suitable patients for surgery seems an essential requirement for the patient’s best therapeutic choice. In case of absent primary post-surgical residual tumor, good performance status, single recurrence and platinum-sensitive recurrence, surgery could be performed.

Further clinical trials with increasingly stringent patients’ selection are needed before considering a patient with recurrent platin sensitive ovarian cancer eligible for surgery or not.

Conflicts of Interest: All authors have completed the ICMJE uniform disclosure form (available at http://dx.doi.org/10.21037/gs-20-326). The series “Ovarian Cancer Recurrence” was commissioned by the editorial office without any funding or sponsorship. The authors have no other conflicts of interest to declare.