Ovarian cancer is the first cause of death among gynecologic malignancies (1). The surgical treatment represents the first option with the aim to achieve the optimal debulking, followed by systemic chemotherapy (2). However, even achieving complete cytoreduction the majority of patients at stage III-IV develops a recurrence in a few years (3). To date, different treatment options are suitable to prolong the survival rate of these patients as monoclonal antibodies and targeted therapies as bevacizumab or PARP inhibitors, and biological therapy. However, the results obtained are still partial and not completely effective (4). One of the most attractive methods, currently available in several oncologic centers, is the hyperthermic intraperitoneal chemotherapy (HIPEC). It is an effective method to deliver antiblastic drugs directly in the abdomen at the time of surgery, moreover the hyperthermia addiction allowed to enhance the tissue absorption, that is different depending on different factors as drugs administered and temperature reached, and consequently the cytotoxic action of chemotherapeutic drugs that reach the maximum effect between 40 and 43 centigrade (5). HIPEC treatment is adopted in different kind of cancer as gastric, colorectal and primary peritoneal carcinosis. For ovarian cancer treatment, this technique, was for a long time debated, however after the results of a randomized trial by van Driel et al. (6) HIPEC was inserted in NCCN guidelines as an optional treatment for interval debulking surgery (NCCN clinical practice guidelines Version 1.2019–March 8, 2019 OV-2).

The role of HIPEC in treatment of primary ovarian cancer (POC) and recurrent ovarian cancer (ROC) is actually under study. Different series could be found in literature, and different on-going trials (HORSE NCT01539785, CHORINE NCT01628380, HIPOVA-01NCT03220932). However, the heterogeneity of the population and the different drugs administered did not allow to draw definitive conclusions.

The present study aims to explore whether the addition of HIPEC in ROC patients could improve clinical outcome. A systematic review of the literature and meta-analysis was performed. We present the following article in accordance with the PRISMA reporting checklist (available at http://dx.doi.org/10.21037/gs-20-335).

We performed our meta-analysis following the Preferred Reporting Items for Systematic reviews and Meta-Analyses (PRISMA) (7) and the Meta-analysis Of Observational Studies in Epidemiology (MOOSE) statement guidelines (8). The research protocol was designed a priori, defining methods for literature search, article examination and inclusion criteria, data extraction and analysis.

Searches were performed using PubMed, Scopus, and Cochrane from the inception of all databases until March 2020. We searched the databases with a combination of the following keywords and Medical Subject Headings (MeSHs): “ovarian recurrence, ovarian cancer recurrence, peritoneal cancer recurrence, ovarian recurrence AND HIPEC, secondary cytoreduction HIPEC”, without restricting our search geographically or linguistically. The PRISMA based flow-diagram in Figure 1 depicts our search strategy. If it was necessary, we obtained unpublished data by contacting authors of the original papers whenever methodology indicated that further outcome data were recorded. 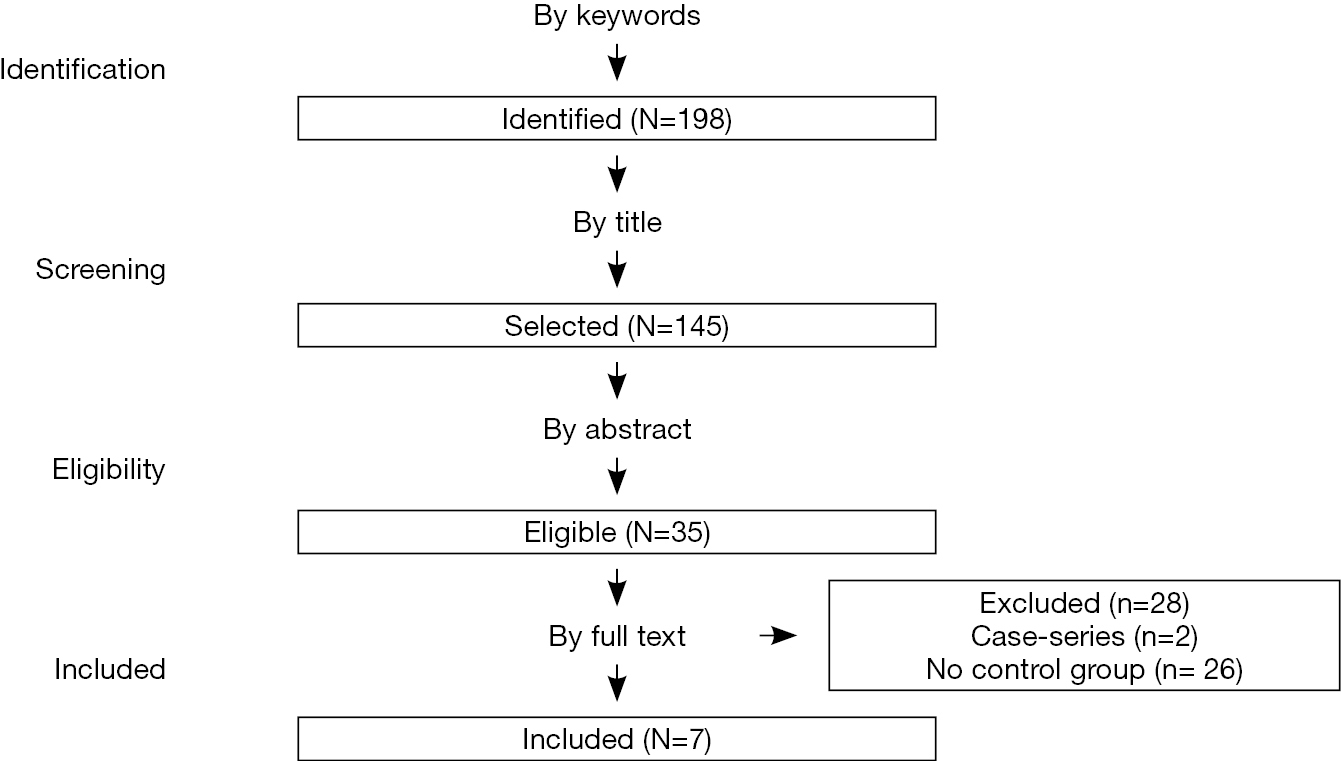 Two authors (CR and GR) reviewed and classified all abstracts independently. The agreement about potential relevance was reached by consensus of the researchers; the same two authors were able to obtain full-text copies of those papers and separately extracted relevant data regarding study characteristics and outcomes. Later, the two reviewers discussed all the inconsistencies; and, if needed, a third author (SC) decided if no consensus was reached.

If more than one study was published on the same cohort and with the same identical endpoints, population overlapping was avoided considering only the article with the most comprehensive information.

Two different authors (GR and AS) assessed the risk of bias of all studies included in this review. The Modified Newcastle-Ottawa Scale for case-control studies was used for observational studies; The Cochrane risk of bias tool was used to assess the risk of the included RCTs. In case of disagreement, a third reviewer (SC) judged. Potential publication bias was assessed by the Egger’s test. The articles remained were then filtered according with the availability for meta-analysis.

The primary outcome of the meta-analysis was the one-year overall survival (OS). Secondary outcomes explored were the two, three and five-year OS.

Pooled odds ratios (ORs) and 95% confidence interval (CI) were calculated using the Der Simonian and Laird random-effects model. We quantified heterogeneity to describe the percentage of total variation across studies attributable to heterogeneity rather than by chance by means of Higgins I2-statistic. In our meta-analysis, I2-values of 25%, 50% and 75% corresponded to cut-off points for low, moderate and high degrees of heterogeneity. We used Review Manager 5.3 (The Nordic Cochrane Centre 2014, Copenhagen, Denmark) and Stata 14.1 (Stata corp., College Station, TX, 2013) to analyze data. For studies in which the corresponding results were not shown, the Engauge Digitizer v.4.1 software was used to extract survival data obtained from the Kaplan-Meier curves.

We identified and assessed 198 initial studies (Figure 1). Of those, 26 studies were considered pertinent for the study criteria, seven of them were considered available for meta-analysis. Depicts summary characteristics of included studies Table 1. Those seven studies regarded women with ROC treated with or without HIPEC. Concerning the included studies, they were conducted in France, Spain, Italy, Israel, Brazil and Egypt between 2009 and 2019. We identified one RCT (9), one prospective (10) and five retrospective case-control studies (11-15).

Drugs used for HIPEC chemotherapy, as well as temperature and duration, were described in every study. The most used HIPEC chemotherapy was cisplatin. It was used in combination with other agents such as doxorubicin, mitomycin-C or paclitaxel. One study used carboplatin in combination with paclitaxel or doxorubicin (12). One research involved the use of oxaliplatin alone (10). Mean temperature for HIPEC was between 41–41.5 °C.

Quality assessment of studies, with the Newcastle-Ottawa Scale and the Cochrane Tool, showed an overall good score regarding the selection and comparability of the study groups, as well as for ascertainment of the outcomes of interest in case-control studies. For the RCT (9) quality assessment revealed a low risk of bias in 5/7 analyzed elements (Tables S1,S2).

Table S1 Quality scores of the case-control studies included in the meta-analysis, assessed by the Newcastle-Ottawa scale
Full table

Synthesis of the results 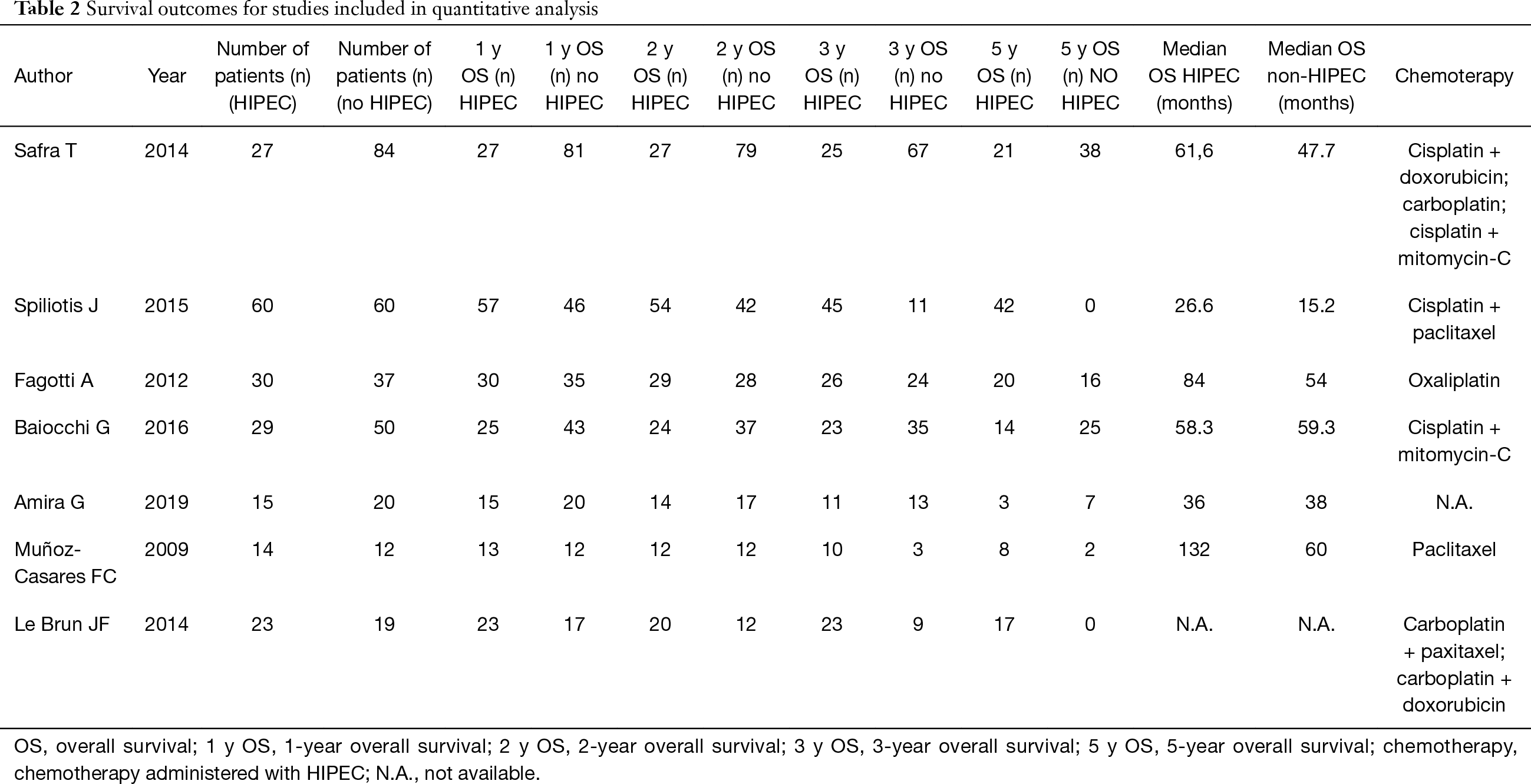 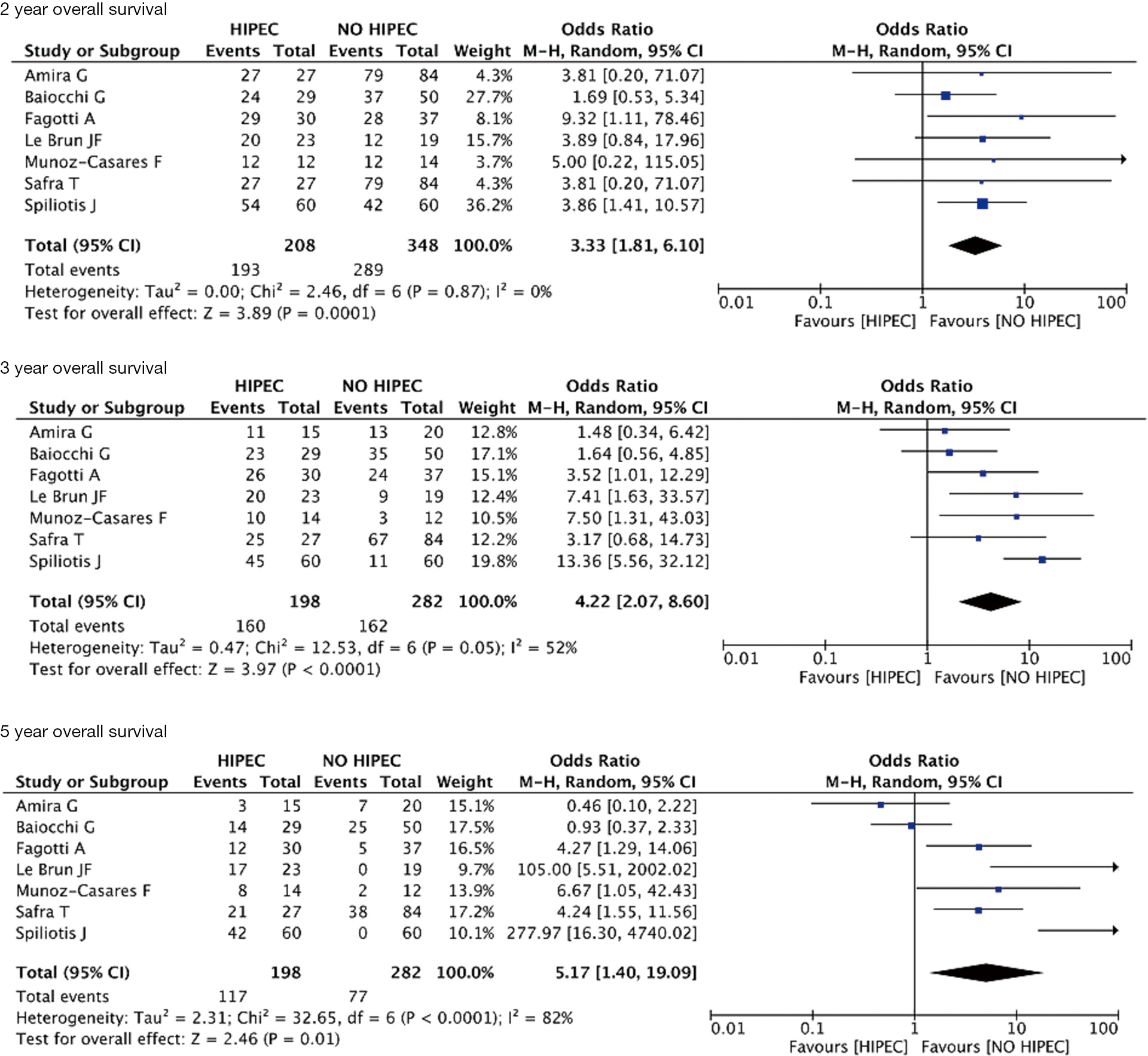 Common adverse reactions after intervention were reported by two studies without distinction between cases and controls (11,14). Amira et al. (14) reported a 53% of chemotherapy-related toxicity, followed by pulmonary complications (33%) need for mechanical ventilation; 13% chest infections). Almost 20% of women experienced wound infection after surgery. The most common side effect reported by Safra et al. (11) was related to chemotherapy, with mild nausea which was successfully treated by anti-emetics. No complications were reported in other studies included in quantitative analysis.

The role of HIPEC for ovarian cancer treatment, seems to furnish clear benefits. Even if the literature remains partially controversial (16).

The randomized trial conducted by van Driel et al. (6) demonstrated the effective role of HIPEC to prolong the survival rate of patients with diagnose of POC submitted to interval debulking surgery. However, the present study was focused on a different subset of patients affected by ROC. Actually, no concrete randomized studies are available regarding this patient’s subset. An Italian randomized trial HORSE (NCT01539785) is actually in a follow-up phase, awaiting the results.

A randomized trial by Spiliotis et al. was published (9); however, it was not sufficient to furnish concrete conclusions about the usefulness of HIPEC for ROC.

Considering the most relevant literature available about HIPEC and ROC, in a study by Petrillo et al. (17), a long-term follow-up series of patients with ROC submitted to secondary cytoreductive surgery and HIPEC was studied with a median follow-up of 5 and 7 years. The results of the study suggested the benefits of HIPEC in terms of long-term survival rates.

Considering our meta-analysis, the results seem very encouraging since the OS at 1, 2, 3 and 5 years were statistically significative in favor of HIPEC groups. However, the limits are related to the heterogeneity of treatments in terms of drugs used and protocol adopted for HIPEC. Moreover, surgical treatment and the achievement of complete debulking remain a fundamental step. Another limitation of our quantitative analysis is related to the design of included studies; the majority were retrospective case-control studies and only one research was a prospective randomized trial. Moreover, the small number of samples in selected studies should be taken into account.

However even, acknowledging such limitations, the results of the meta-analysis were statistically significant in favor of HIPEC, especially for the two years follow-up (P<0.0001).

In a similar meta-analysis published in 2015 by Huo et al. (18) the authors obtained similar conclusions. Considering this aspect, the accordance of two different studies performed in different periods reinforce the scientific evidence.

Some relevant studies reported an average of 60 months survival rate for selected patients submitted to secondary cytoreductive surgery for ovarian cancer (19,20); these data are in line with our results.

The complexity of surgery can be related to the disease dissemination influencing the surgical invasiveness and the risk of complications. Considering that even if the HIPEC treatment seems to be safe in terms of intra-operative and post-operative complications; however, it represents an additional risk, especially related with bowel anastomosis leakage, often related to the number of surgical procedures performed. The surgery for ROC could be often less invasive than primary surgery (21,22), especially for isolated abdominal relapse (23), if compared with POC. In this context, the HIPEC addition during ROC, especially for isolated relapse, could reduce the risk of complications.

However, the ROC could not be the only time to perform HIPEC, in fact, as demonstrated in some studies, the HIPEC procedures can be administered even more times during the disease history (24).

Another essential aspect that should be acknowledged is the approach adopted for HIPEC administration. In a recent study by Petrillo et al. (25), the authors completed a pharmacokinetic study in which they demonstrated that the HIPEC drugs absorption was statistically significative enhanced in patients underwent laparoscopic procedures. Probably it was related to the enhanced intra-abdominal pressure and the reduction of pressure dispersion warrantied by laparoscopy. However, considering that the endoscopic approach is not always feasible, especially for ovarian cancer treatment, some novel technologies are available and in an experimental phase (26-28).

The present systematic review and meta-analysis suggest that the HIPEC addition during cytoreductive surgery for ROC treatment can give a survival rate benefit that was recorded even after five years of follow-up.

However, the heterogeneity of the series studied cannot allow providing definitive conclusions. To date, several randomized trials are on-going with the aim to give a definitive answer to this aspect.

Provenance and Peer Review: The article was commissioned by the editorial office, Gland Surgery for the series “Ovarian Cancer Recurrence”. The article has undergone external peer review.

Reporting Checklist: The authors have completed the PRISMA reporting checklist. Available at http://dx.doi.org/10.21037/gs-20-335

Conflicts of Interest: All authors have completed the ICMJE uniform disclosure form (available at http://dx.doi.org/10.21037/gs-20-335). The series “Ovarian Cancer Recurrence” was commissioned by the editorial office without any funding or sponsorship. SC served as the unpaid Guest Editor of the series and serves as an unpaid editorial board member of Gland Surgery from Aug 2019 to Jul 2021. The authors have no other conflicts of interest to declare.