Although promising, the method only allows identification of parathyroid glands without providing information about the functional status of the glands. Nevertheless, improved capacity for identifying the parathyroid glands could be the first step for the preservation of the tissue and thus their function.

The systematic search for parathyroid glands during thyroid surgery could increase the operative time and in some cases endanger the glands that are outside the direct operative field. This identification may force an unnecessary, extended dissection (5). The autofluorescent nature of the parathyroid glands could also be useful for identification of inadvertently removed glands during thyroid surgery or cervical lymph node dissection, allowing their immediate or delayed auto-transplant.

Incidental parathyroidectomy is a frequent event during thyroid surgery, occurring in 6.4% to 31.1% of cases (6). Those rates have the potential to be decreased with a meticulous surgical technique, but complete elimination of inadvertent removal of parathyroid tissue will depend of the development of a system capable of identifying all the glands, including rare intrathyroidal tissues. The clinical significance of the incidental removal of single gland is not obvious; the traditional idea that the presence of one well-perfused parathyroid gland may be sufficient for maintaining calcium homeostasis has not been rebutted (5).

However, surgeons generally treat every parathyroid gland as if it is the patient’s last, so that all efforts to minimize their incidental removal are emphasized (7,8). Due to the high cost of commercially available devices for detecting autofluorescence, we developed a goggle-based, easily reproducible system using common gadgets that we have used in our daily practice (9). In this manuscript, we present results of using this system for inspection of the removed thyroid specimen for detecting inadvertently removed parathyroid glands under conditions that could allow for subsequent auto-transplant.

We present the following article in accordance with the STROBE reporting checklist (available at http://dx.doi.org/10.21037/gs-20-163).

All procedures were performed in accordance with the ethical standards of the institutional review board (approval from Comissão de Ética do Hospital dos SAMS, 002/2018) and with the 1964 Helsinki declaration and its later amendments (as revised in 2013) or comparable ethical standards. Informed consent was obtained from all individual participants included in the study.

Forty patients (33 females, 7 males) with ages ranging from 36 to 83 (mean: 59.5, SD: 12.59) years were submitted for thyroid resection surgery. A total of 34 total thyroidectomies (seven with a thoracic component), four lobectomies, and two completion thyroidectomies were performed by the same surgeon, a general surgeon with particular interest in endocrine surgery and a practice of 50 thyroidectomies per year on average.

Removed specimens were inspected in a sterile environment for the presence of inadvertently excised parathyroid glands using our device composed of an emission light emitting diode (LED) and an image acquisition system. 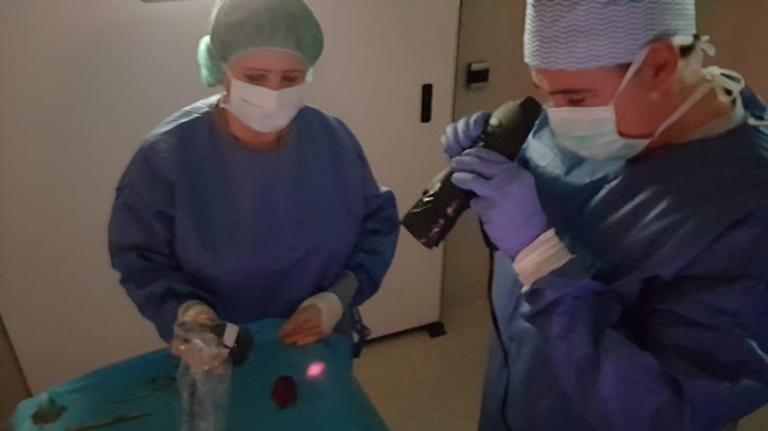 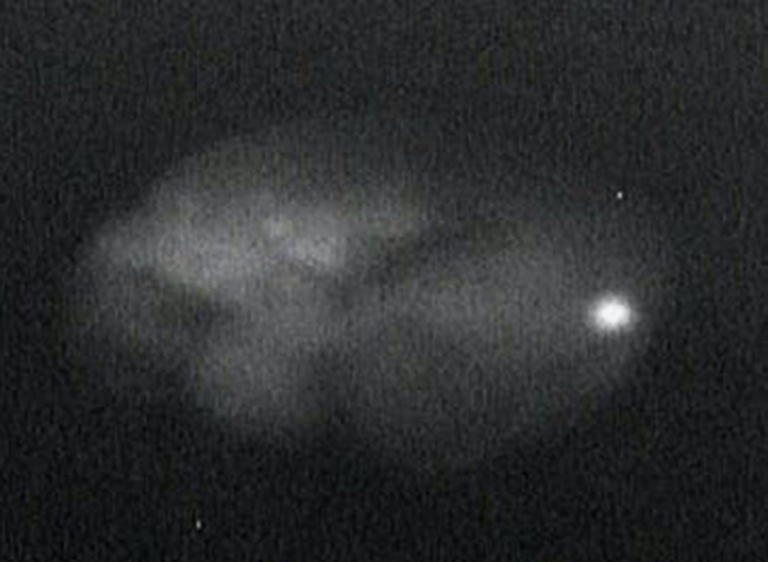 Localization of suspect high fluorescent areas was recorded for confirmation with the results of the regular pathological exam.

Determinations of serum calcium and parathyroid hormone (PTH) were performed prior to surgery and were measured 24 hours and 15 days after surgery. For statistical analysis of data, IBM SPSS Statistics V.22 (IBM Corp. Released 2013. IBM SPSS Statistics for Macintosh, Version 22.0. Armonk, NY: IBM Corp) software with Student’s t-test and chi-square tests were used. A level of significance of 0.05 was used. 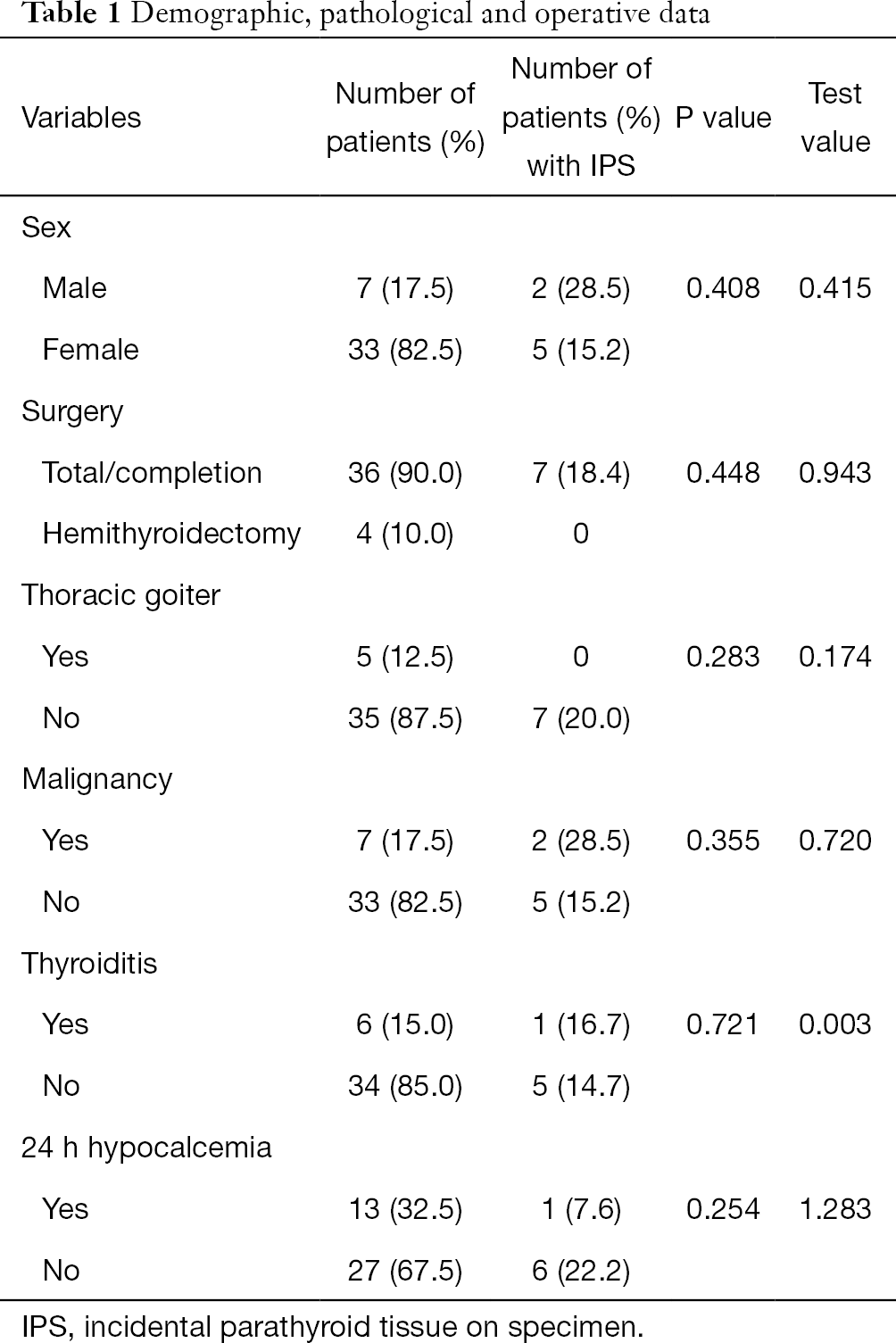 The study was however underpowered to detect hypocalcemia (π=0.085).

Pathological examination of the resection specimen identified parathyroid tissue in eight samples from seven patients, all of which were submitted for total thyroidectomies. One specimen had two intrathyroidal parathyroid glands.

Across the whole sample there were eight suspicious areas with a significant increase in fluorescence but only one was considered suspicious by the surgeon. Subsequent pathological examination confirmed seven of these tissues as parathyroid tissue. There was one false positive (colloid nodule). In spite of maintaining conditions for auto-transplantation of parathyroid glands, the small volume of parathyroid tissue detected in the samples prevented transplantation.

Table 2 summarizes the characteristics of the patients with incidentally removed parathyroid tissue.

The system failed to identify one of the two intrathyroidal parathyroid glands present in a patient, identifying only the most superficial one (intracapsular) missing the deep situated one, localized 3 mm into the parenchyma.

Visual inspection of the surgical specimen in search of inadvertently removed parathyroid glands is usually performed for the majority of the surgeons, allowing for immediate auto-transplantation.

If compared with the FDA approved devices for parathyroid identification our system has the advantage of the low cost (less than 3,200 euros), making it affordable even for hospitals with scarce financial resources, and is easier to assemble than other custom-build devices that need significant technical intervention (11).

Despite our results failing to show any relationship between the occurrence of incidental parathyroidectomy and post-operative hypocalcemia, decreasing the necessity of auto-transplant of incidentally removed glands, there is an evident advantage in knowing if there is any parathyroid tissue in thyroidectomy specimen. Presence of more than one fragment of parathyroid tissue might become an indication for auto-transplant.

The high sensitivity and specificity rates obtained with the utilization of autofluorescence showed the utility of the system that may function as an “optical biopsy” after proper validation.

For this preliminary study, we could not use the device for identification of parathyroid glands in situ during surgery, as the ethical committee approval did not include that utilization. In spite of not providing information about the vascularization of the parathyroid glands, an early awareness of their localization may help the surgeon to avoid their manipulation and to prevent devascularization. Thus the integration of intraoperative visualization of parathyroid glands with auto-fluorescence followed by in table inspection of the specimen could decrease rates of post-operative hypocalcemia as shown by the works of Kim et al. and the randomized controlled trials conducted by Dip et al. and Benmiloud et al. (16-18).

Further studies with larger sample sizes will help improve our understanding of this issue.

A relevant limitation of this study is the fact that all the surgeries were performed by the same surgeon, an experienced thyroid surgeon although not a high-volume surgeon, whose experience could be related to the little volume of the parathyroid fragments found.

As the majority of thyroid surgeries all-over the world are performed by low-volume surgeons, whom may benefit more of the assistance of autofluorescence for the identification of parathyroid glands, a study evolving surgeons with different levels of expertise would be useful, evaluating not only the results of postoperative hypocalcemia but also the effects on the learning curve.

Although in this study we could not demonstrate a relationship between incidental parathyroidectomy and postoperative hypocalcemia, the high sensitivity and specificity rates make autofluorescence of parathyroid glands an useful tool for identification of incidentally removed glands during thyroidectomy.

The authors want to thank Drs. Paula Guerra Marques, Sara Turpin and Delfina Brito of the Department of Pathology of Hospital dos SAMS for their contribution in this study.

Reporting Checklist: The authors have completed the STROBE reporting checklist. Available at http://dx.doi.org/10.21037/gs-20-163

Conflicts of Interest: All authors have completed the ICMJE uniform disclosure form (available at http://dx.doi.org/10.21037/gs-20-163). The authors have no conflicts of interest to declare.

Ethical Statement: The authors are accountable for all aspects of the work in ensuring that questions related to the accuracy or integrity of any part of the work are appropriately investigated and resolved. All procedures were performed in accordance with the ethical standards of the institutional review board (Approval from Comissão de Ética do Hospital dos SAMS, 002/2018) and with the 1964 Helsinki declaration and its later amendments (as revised in 2013) or comparable ethical standards. This study is part of a PhD project and has been registered in a national (Portuguese) public database: https://renates2.dgeec.mec.pt (Project ID: 101602375), thus complying with the Declaration of Helsinki requirement for the registration of research.