The spread of video-assisted thoracic surgery (VATS) started in the early 1990s (1), when surgeons began using this approach to perform major thoracic surgery including mediastinal tumour resection. Indeed, patients who underwent VATS approach showed better postoperative outcome, shorter length of stay and better cosmetic results compared with conventional open access (2). Since 2004, uniportal VATS resections have become progressively widespread worldwide (3). Because of the progressive development of thoracoscopic surgical instruments and endoscopic techniques, uniportal VATS approach has also been broadly applied in the treatment of thymoma patients, having shown promising results and gradually replacing median sternotomy (4). However, there is a paucity of published data with respect to uniportal VATS thymectomy (5-7) and to date, this is the first time that the use of a homemade glove-port system is reported in thoracic surgery permitting the use of carbon dioxide (CO2) insufflation that guarantees better exposure and dissection of the thymus.

The aim of this article is to analyze the safety and feasibility of single incision glove-port VATS to perform extended thymectomy (ET).

This prospective, single-centre short-term observational study was carried out at the Unit of Thoracic Surgery, AOU Ospedali Riuniti Ancona. Consenting patients scheduled to undergo elective ET were enrolled. Written informed consent was obtained from all patient. All procedures were performed and supervised by a single surgeon (RM).

In our study exclusion criteria were:

For both MG patients and non-MG patients, we performed an ET, defined as the resection of the thymus gland, as well as the pericardial adipose tissue from the right phrenic nerve to the left one. All surgical procedures were performed under general anaesthesia with selective one-lung ventilation and patients underwent a single glove-port VATS approach. Postoperative intensive care was required in MG patients. All other patients were scheduled to be extubated in the operating room (OR) and managed in our thoracic unit ward. All resected specimens were sent with different landmarks indicating the correct orientation. Pathologic staging and histologic typing were established according to the World Health Organization classification and Masaoka stage.

We prepared the glove port with simple and inexpensive instruments that are widely available: a size 7 latex sterile surgical glove, a double-ring wound protector, wound closure strips, 1-0 silk ties and three 5-mm trocar (Figure 1A). After performing 3 holes of 2–3 mm on the glove fingertip, silicon trocars were placed into the thumb, third and fifth fingers of the glove by 1-0 silk ties and wound closure strips, in order to minimize conflicts between instruments during surgery (Figure 1B). After that, the glove-system was fixed to the retractor outer ring, rolling up the wrist portion of the glove on the flexible ring (Figure 2A).

Figure 1 Glove-port materials. (A) Instruments needed to made the glove system: a size 7 latex sterile surgical glove, a double-ring wound protector, 1-0 silk ties, wound closure strips and three 5-mm trocar; (B) the glove-port system: silicon trocars were placed into the thumb, third and fifth fingers of the glove. 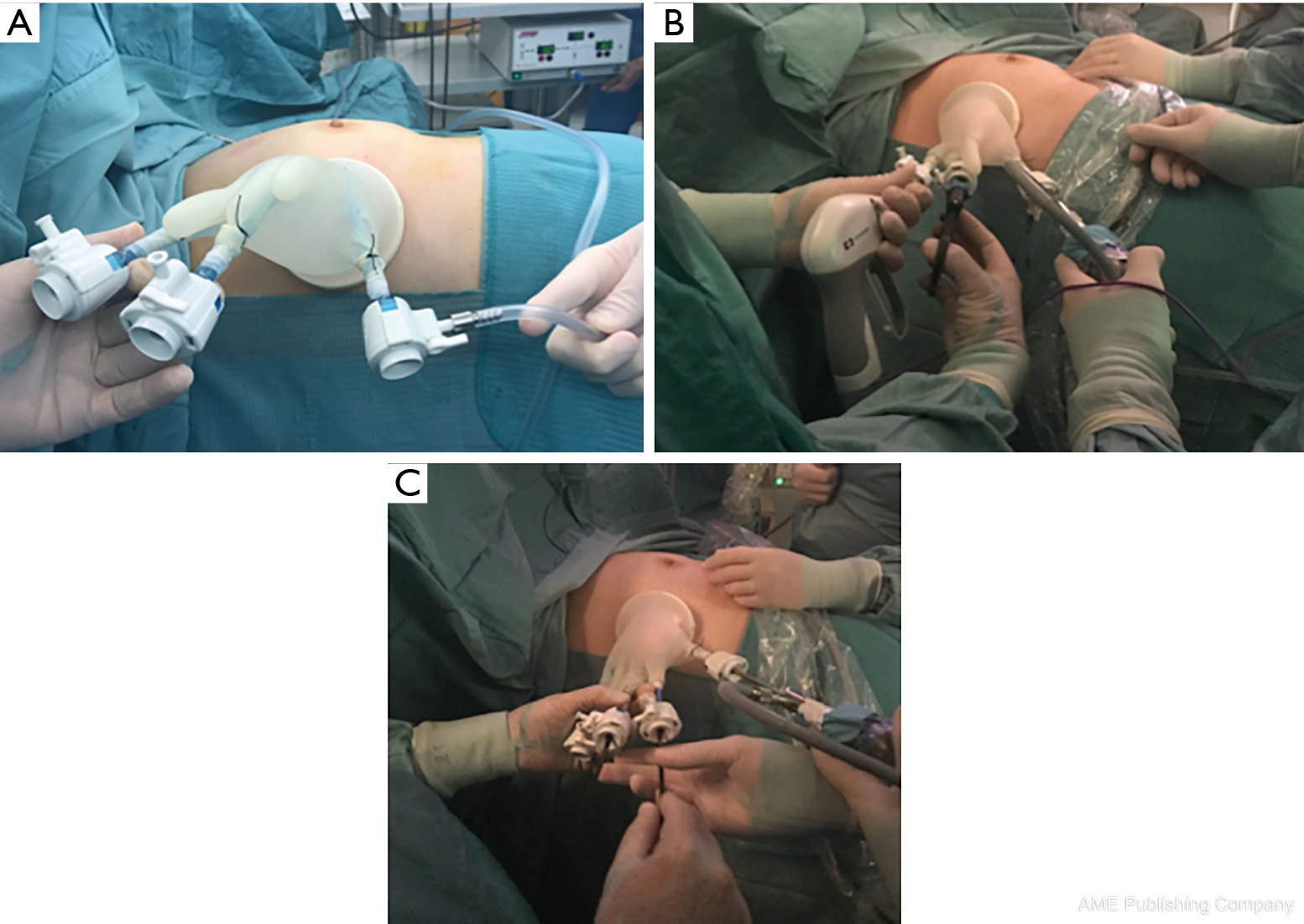 The thumb-trocar was connected to a carbon dioxide gas insufflator and used for the 30°, 5 mm camera. In the other two trocars, we inserted thoracoscopic instruments (Figure 2B). The additional two trocars in the second and fourth fingers of the glove were placed as necessary (Figure 2C).

The patient was conducted into the OR and general anesthesia was performed using a left double lumen oro-tracheal tube checked by a flexible bronchoscope. Therefore, the patient was positioned in a 30° semi-supine position with a silicon cushion inserted below the right hemithorax and the ipsilateral arm was abducted in order to expose the axilla (Figure 3A). The surgical field was then prepped. Of 38 surgical procedures, 29 were performed using a right-sided approach, due to the relatively large space in the right chest cavity (because of the absence of the heart) and the anatomical landmarks consisting of the superior vena cava, the phrenic nerve and the innominate vein. Instead, 9 patients underwent left-sided approach, due to the tumour location on the left of the median line. 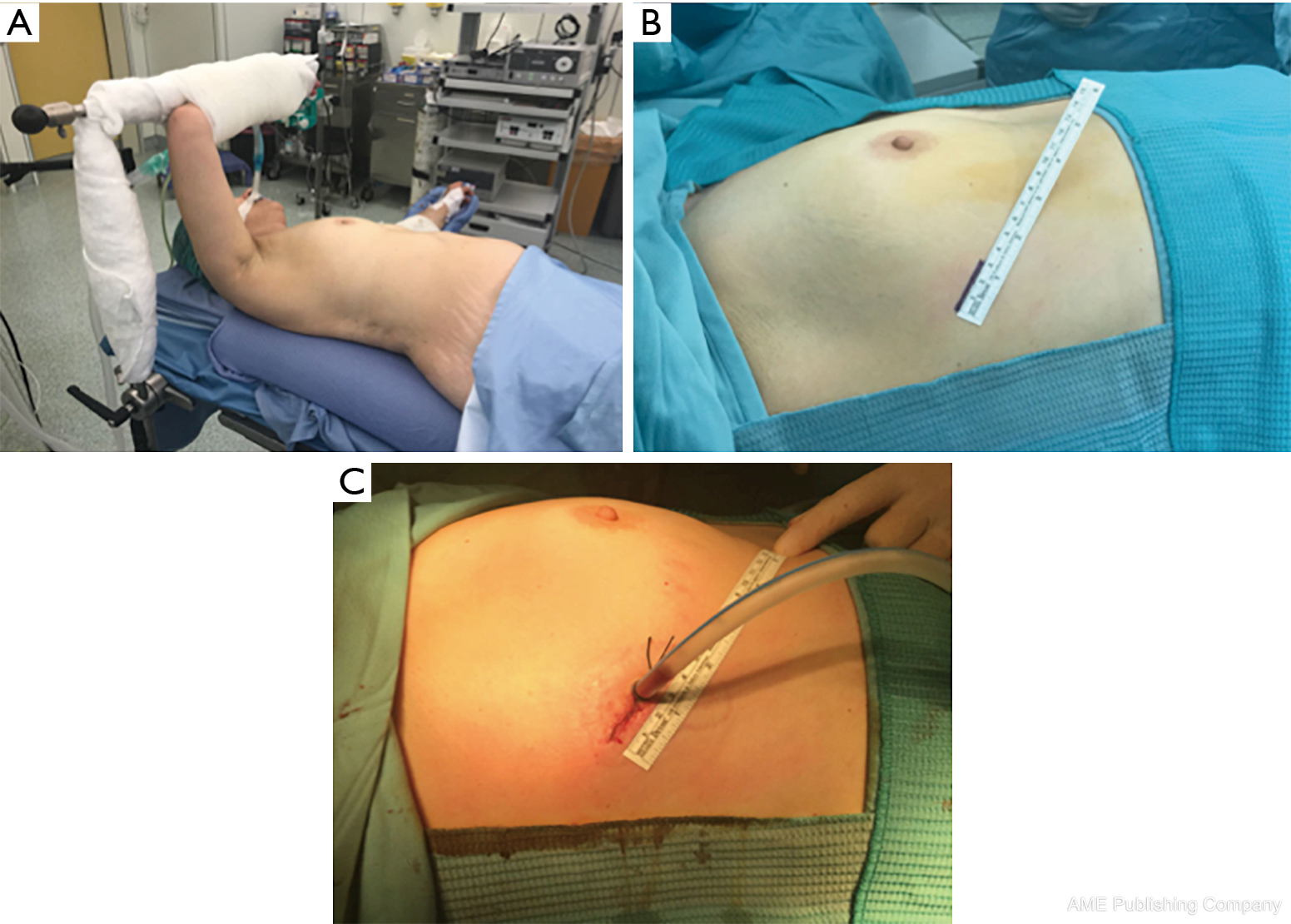 A single incision of 3–4 cm at the fifth intercostal space, anterior axillary line, was created in all cases (Figure 3B). After connecting the glove-system to the wound protector, we started insufflating CO2 with a 6 L/min flow and 8 mmHg (the level was regulated in accordance with the anesthesiologist depending on the hemodynamic response and hematic CO2 level), allowing the operator and assistant, both posteriorly to the patient, to dissect the fat plane more easily and to gain better access to the bilateral thymic horns. Moreover, CO2 provides more space to dissect large masses.

Dissection started from caudal to cranial along the phrenic nerve and lateral to medial until reaching the contralateral pleura and phrenic nerve. We always used an Energy Device for removing pericardial adipose tissue from the phrenic nerves in order to avoid nerve damage. Thymectomy was then performed proceeding along the left innominate vein and dividing the thymic veins with the use of haemoclips or by the use of the energy device. The specimen was finally placed in an endobag and taken out of the thorax after removing the glove-system. In all cases, only one 24Ch chest tube was placed in the anterior mediastinum through the port collected with electronic drainage system (Figure 3C), although the contralateral pleural cavity was occasionally opened during the surgical procedure. Landmarks were positioned in order to define the correct orientation of the surgical specimen. Intraoperative pain was controlled infiltrating three intercostal spaces (IV, V and VI intercostal spaces) with Naropina 7.5% at the end of the operation under thoracoscopic vision.

Thirty-eight consecutive patients (20 men and 18 women, mean age of 61.6 years) were enrolled in the study group between September 2016 and October 2019. No patients needed to convert to multiport VATS approach, thoracotomy or sternotomy. No intraoperative complications were recorded and no problem concerning contralateral ventilation occurred when the pleural cavity was occasionally opened. Indeed, neither hemodynamic response nor hematic CO2 level underwent significant changes during these events, allowing to continuate the procedure insufflating CO2.

Age, gender, pulmonary function tests, operation time, blood loss, incision length, duration of chest tube drainage and length of hospital stay are listed in Table 1. Of the thirty-eight patients, 13 had a history of refractory MG with thymoma and 8 had incidental findings of thymoma without MG. Additionally, 8 mediastinal cysts and 9 thymic follicular hyperplasia were included in the study. The mean forced expiratory volume in one second, forced vital capacity and diffusing capacity of the lung for carbon monoxide were 99%, 104% and 84% respectively. All patients received ET. 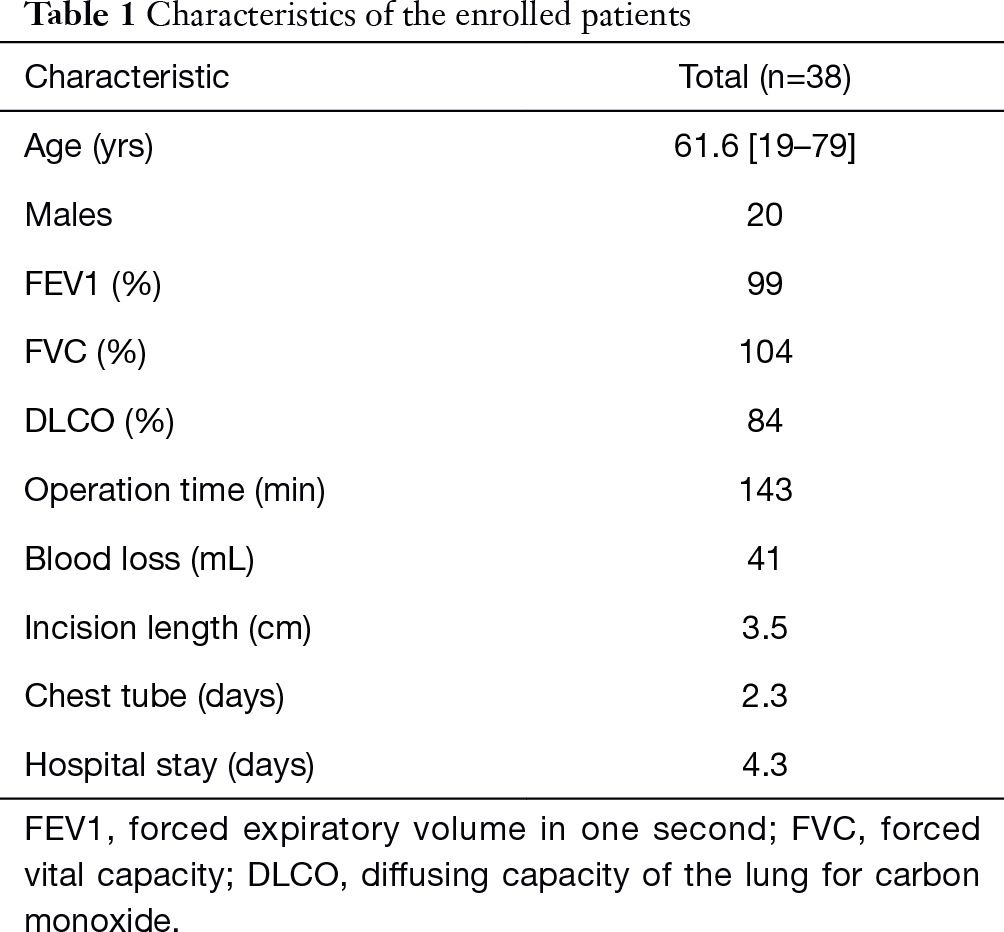 The pathologic characteristics of the tumours are collected in Table 2. The mean diameter of the resected tumor was 5.1 cm (range: 1.6 to 14 cm) and mean operation time was 143 minutes. The mean postoperative drainage duration and length of hospital stay were 2.3 and 4.3 days, respectively. The mean of blood loss was 41 mL. There was no occurrence of surgical morbidity or mortality in the study group. During the follow-up period (1–36 months), no recurrence of the tumour was noted and MG therapy has not changed. 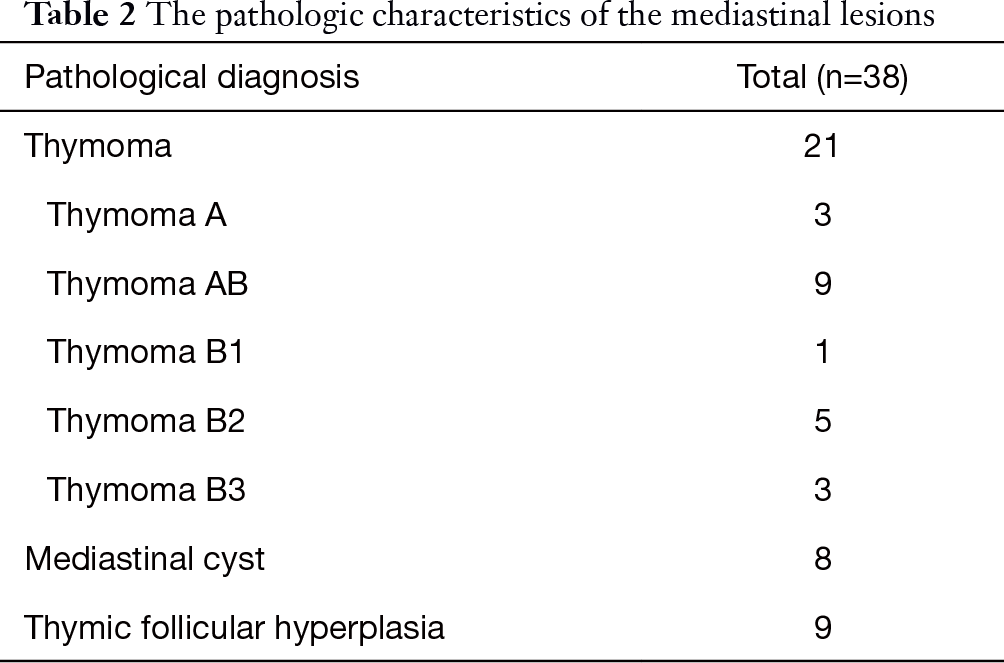 Table 2 The pathologic characteristics of the mediastinal lesions
Full table

We present the first case-series in literature reporting the use of a single glove-port VATS approach to perform ET.

Several surgical teams started to use the VATS approach for mediastinal tumour resection more than 20 years ago, when the technique become widely accepted as an effective alternative to the traditional open approach, ensuring an effective treatment for both Masaoka stage I and II thymoma (6,8).

Our initial experience of 38 consecutive patients who underwent uniportal VATS thymectomy provided results comparable to those previously published in literature (4,7), confirming that a single glove-port approach with CO2 represents a safe and feasible procedure even for very large thymomas.

Indeed, from our preliminary results and experience, we deduced that well-encapsulated tumours are ideal for the uniportal VATS approach even if they are >5 cm of diameter. In particular, we suggest a right-sided approach for its benefits deriving from the anatomic landmarks and the absence of the heart.

Furthermore, the use of CO2 insufflation may ease the pulmonary collapse and the dissection phase of the fat plane, exploiting the iatrogenic pneumomediastinum.

To our knowledge this is the first case-series reporting the use of a glove-port system in thoracic surgery.

Indeed, authors who used the single-port technique to perform limited or ET, usually adopted a commercial single-port device (13) increasing the costs of surgery and limiting the instrument’s insertion. We demonstrated that a glove-system port may be both an effective and cost-effective device also in thoracic surgery, allowing the operator to reduce the conflict of the thoracoscopic instruments and to add up to 5 surgical tools as well as previously described in laparoendoscopic surgery.

Indeed, Park was the first to publish in 2009 the use of a homemade single-port device in a child reporting a case of a laparoendoscopic nephrectomy (14).

Since then, this novel, self-made, and inexpensive single-port device was adopted by numerous authors who exploited its several advantages in laparoendoscopic surgery: it is extremely cheaper than the other commercial single-port device; it is easy to make and widely available in the OR; it does not require curved laparoscopic instruments, which increase the cost of surgery and reduce the working space; and it can be easily and rapidly removed (15-18). Furthermore, exploiting the flexibility of the glove, the conflicts between instruments is significantly reduced, maintaining the quality of medical care.

We found only one limitation of this glove-system: the opening of the port is not visible, and thus instrument insertion is not as smooth as with a commercialized port, requiring more attention to avoid piercing of the glove or damaging the skin. However, this criticism can be easily overcome either by feeling the opening for insertion with the hand or drawing back the camera inside the glove to drive the insertion of the instrument.

Our study has some limitations: this is a single centre pathophysiology driven clinical study, the study time was short, the number of cases was limited, and hence it cannot fully elucidate the independent prognostic impact of the findings.

Regarding the occurrence of postoperative MG or disease-free survival, our cohort follow-up time is too short to define the impact of uniportal VATS approach on oncological outcome. Further evaluations are needed to define its therapeutic role and prospective comparative trials with three-port or other less-invasive surgical techniques, are warranted to evaluate the best approach for the management of mediastinal tumours.

In conclusion, our study showed for the first time that single glove port VATS with CO2 insufflation for mediastinal mass resection is safe and feasible and may be used as an alternative to the traditional VATS resections; however, longer term follow-up is needed in order to validate the oncological outcome.

Conflicts of Interest: All authors have completed the ICMJE uniform disclosure form (available at http://dx.doi.org/10.21037/gs-19-521). The authors have no conflicts of interest to declare.

Ethical Statement: The authors are accountable for all aspects of the work in ensuring that questions related to the accuracy or integrity of any part of the work are appropriately investigated and resolved. The study protocol was approved by the local regional ethics committee and was performed in accordance with the ethical standards of the Declaration of Helsinki (as revised in 2013). All patients gave their informed consent prior to their inclusion in the study.