The incidence of papillary thyroid carcinoma (PTC) has increased sharply worldwide, especially papillary thyroid microcarcinoma (PTMC), which due to applying sonography at a large scale in recent decades (1-3). PTMC tends to metastasize cervical lymph nodes (LNs), but level I LNs were rarely involved. We speculate that level I LNs at a higher position than other level LNs, PTMC need a long time to involve level I LNs because of its biological characteristics (2). In other words, people, who with level I LNs metastasis, are at an advanced tumor grade. Based on it, we consider that many patients received operation before level I LNs metastasis. That is why it is rare to see. However, we treated a rare case of a patient who shown an enlarged level I LN as the first symptom. This case suggested that we should consider of PTMC metastasis when a patient has a mass of neck.

The case is a 30-year-old female with a submental cystic mass that had grown rapidly in the last 4 months. Treatment was performed to remove a certain volume of light yellow fluid 1 month ago, which made the mass significantly smaller. Unfortunately, the mass enlarged after. The patient referred to our hospital for a complete treatment.

Physical examination showed a 3.8 cm nodule in the submental region, which is hard and unmovable (Figure 1). In the area of level III, a hard-unmovable nodule measured 1.0×0.5 cm was found. Cervical ultrasound examination showed multifocality in the thyroid, multiple enlarged LNs in level VI and bilateral neck, and a swollen LN on the level I area of the neck (Figure 2). Sonography interpreted as PTMC (both lobes) with metastasis to level I, level VI, level III of the left lateral neck, level II of the bilateral neck. Except for any enlarged LNs, multiple abnormal densities of the area in submental and anterior of hyoid bone were shown by computer tomography (CT) scanning Figure 3). Total thyroidectomy combined with a dissection of level VI LNs was performed under general anesthetic. During surgery, the appearance of the thyroid gland was normal, and surrounding tissues were not involved. Intraoperative pathological assessment of thyroid specimens and level VI LNs shown multifocal PTMC with level VI LNs metastasis. Two focalities in the left lobe with 0.6 and 0.5 cm in diameter. One focality in the right lobe with 0.3 cm in diameter. Left level VI LNs metastasis (8/8), right level VI LNs metastasis (1/8). Combined with imaging assessments, bilateral LNs dissection was operated for further treatment. A 4.5×2.0 cm necrotic LN was found in level I; a nodule was found in the anterior of hyoid measured 2.0×1.0 cm (Figure 4). The postoperative pathological assessment revealed level I LN metastasis (1/1). In the left neck, level II–IV and part of level V LNs metastasis (6/35). In the right neck, level II–IV and part of V lymph metastasis (0/34). PTMC involved the tissue in the anterior of the hyoid. One month after the operation, static thyroid imaging and salivary gland imaging showed no abnormality. The patient admitted to 131I therapy. Three months after the operation, there was no recurrent focality. 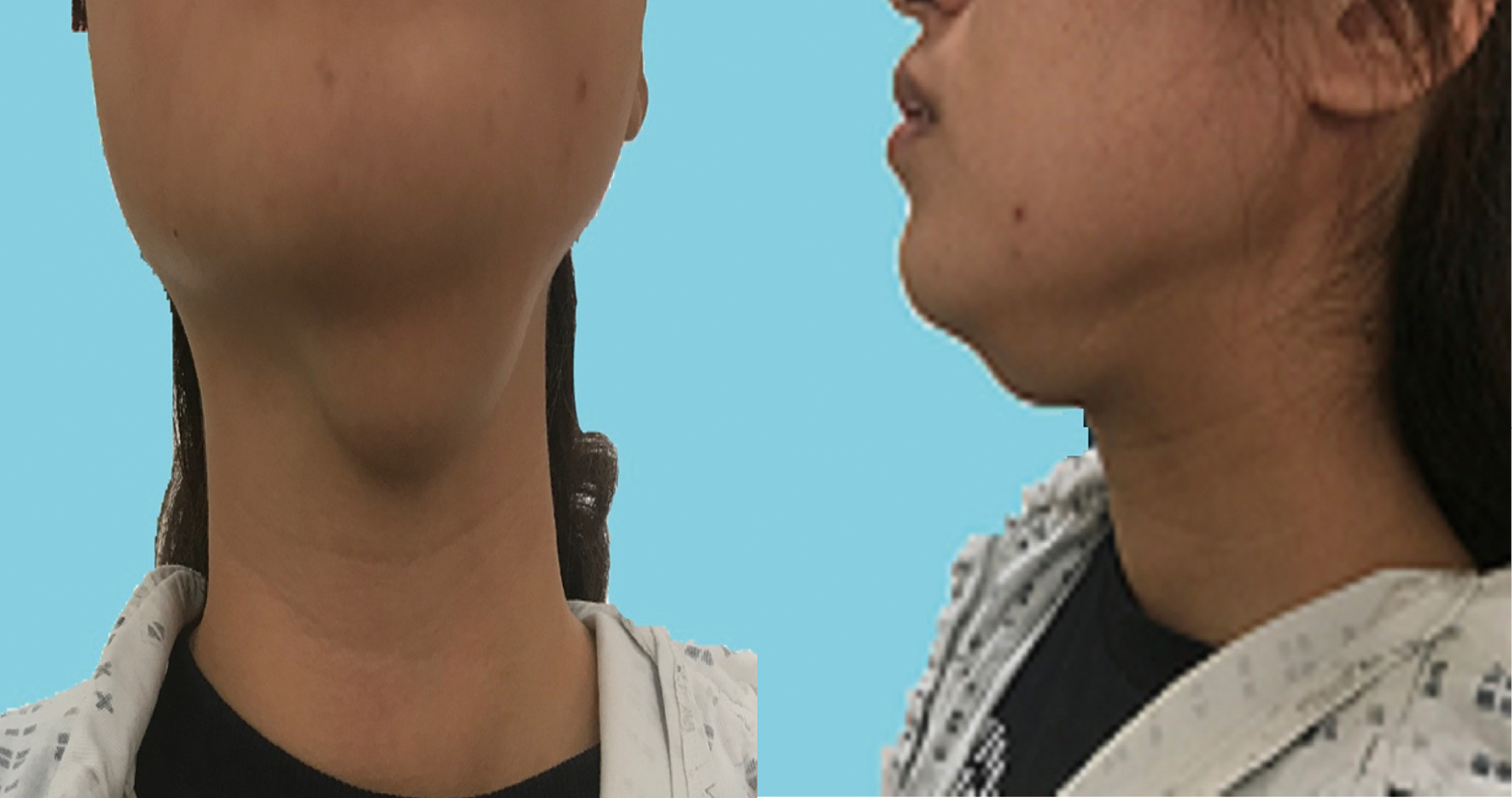 Figure 1 The nodule in the submental region. 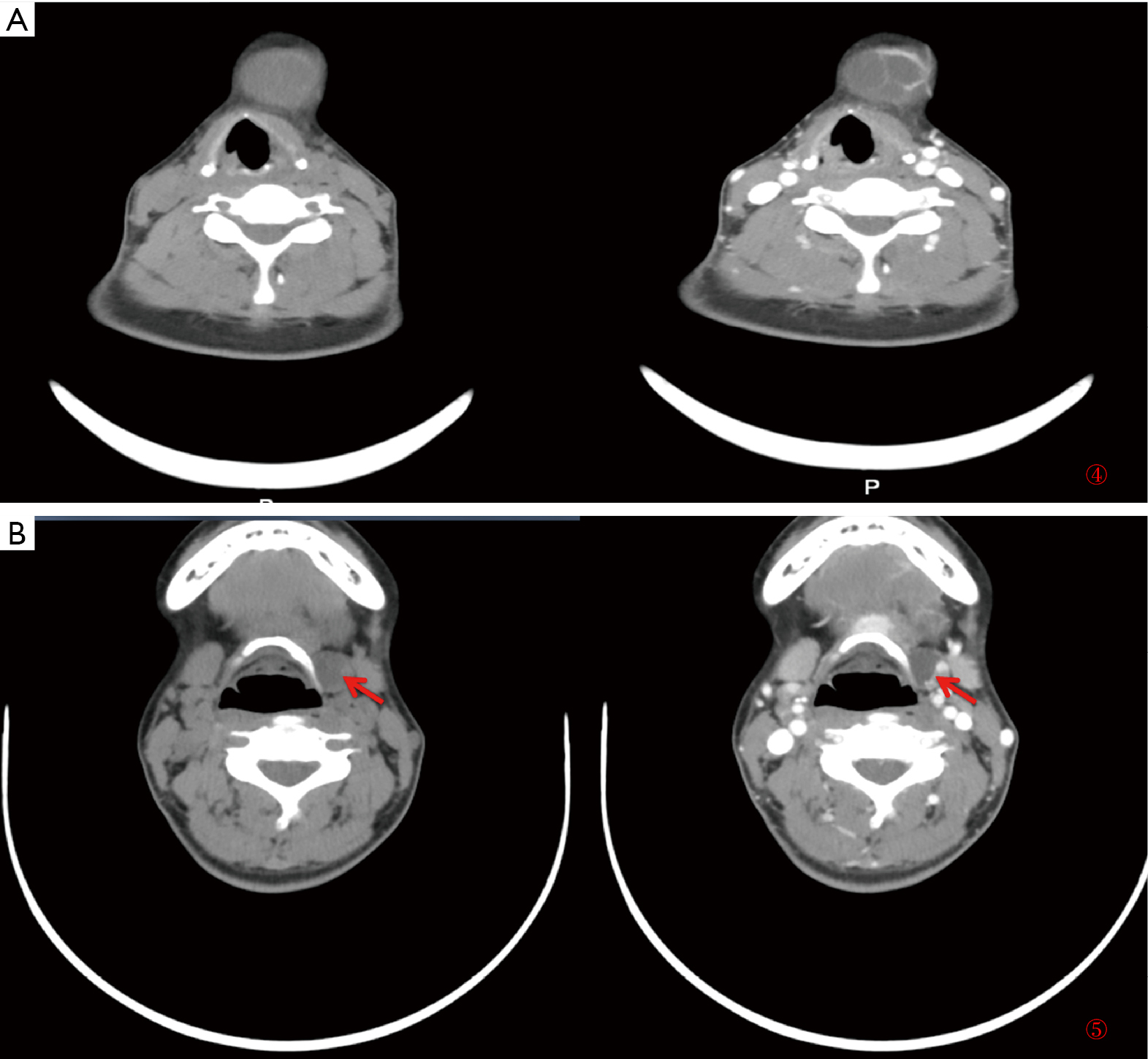 Figure 3 CT scanning: (A) enlarged level I LN; (B) a nodule in the anterior of the hyoid bone. CT, computer tomography; LN, lymph node. 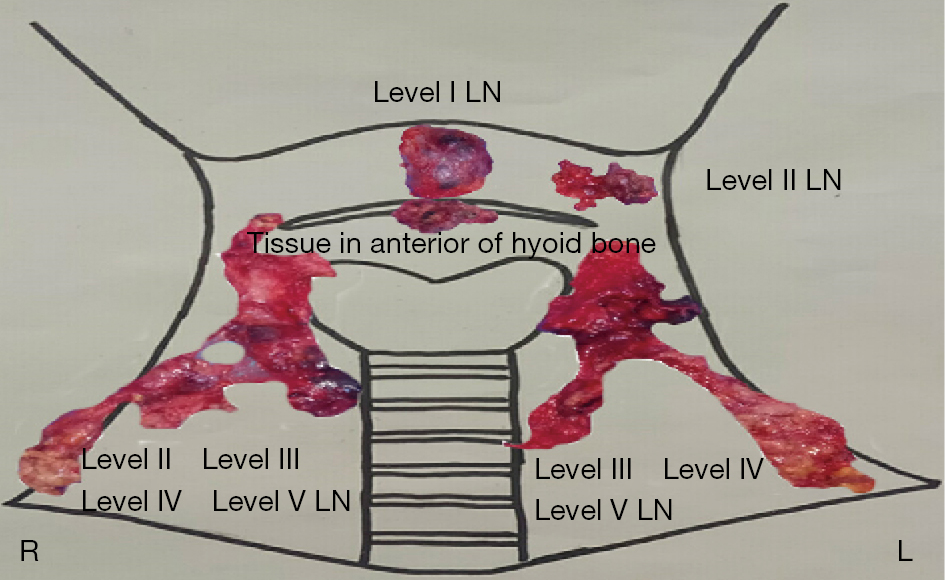 Figure 4 LNs in level I, bilateral level II–IV and part of level V, the tissue in the anterior of the hyoid. LN, lymph node.

With a significantly increased incidence of PTMC, thyroid carcinoma is surmised to become the 3rd most frequent cancer in women by 2019 (1). PTMC characterized by less aggressive and good prognosis, but it also tends to metastasize cervical LNs. The LNs in the central compartment (level VI) at the highest risk being metastasized among cervical LNs. Sometimes lateral LNs can involve, especially these in level III (2,3). However, it is extremely rare to see level I LNs metastasis (4). We speculate that level I LNs at a higher position than other level LNs, PTMC need a long time to involve level I LNs because of its biological characteristics. In other words, people, who with level I LNs metastasis, are at an advanced tumor grade. Based on it, we consider that many patients received operation before level I LNs metastasis. That is why it is rare to see. However, in this case, the patient with level I LNs at an early stage, we considered that it related to some factors when reviewing literature.

We cannot deny that new cases of PTMC are increasing sharply every year worldwide. The newest edition of the American Thyroid Association (ATA) Guidelines suggests that closely follow-up has priority over surgery when PTMC with minimal risk of recurrence. It based on a low mortality rate and metastasis rate in the United States. However, many Chinese surgeons have found that Chinese patients’ LNs metastasis rate and mortality rate are higher than American patients. In this case, the patient has PTMC but had metastasized to level I LN before she was referred to the hospital. In some ways, it may be the things that we need to think about whether ATA guidelines suit Chinese PTMC patients or not.

According to intraoperative pathological assessment, there is only one metastasis LN in level VI, and it means that the patient’s right lateral neck LN has a minimal risk of metastasis. It still needs a long-term follow-up to proof that the patient who is like this case can receive help from bilateral LNs dissection.

Besides that, we should pay attention to the patient who has a mass of neck, and it may come from a PTMC metastasis.

Conflicts of Interest: All authors have completed the ICMJE uniform disclosure form (available at http://dx.doi.org/10.21037/gs-19-363). The authors have no conflicts of interest to declare.

Ethical Statement: The authors are accountable for all aspects of the work in ensuring that questions related to the accuracy or integrity of any part of the work are appropriately investigated and resolved. Ethical approval was given by the medical ethics committee of the Second Hospital of Jilin University with the following reference number: No. 125, 2017. The report follows the principles of medical ethics, tests, and treatments in this report that are consented by the patient and her families. Confidentiality of the patient’s personal information to protect the patient’s privacy. Written informed consent was obtained from the patient for publication of this case report and any accompanying images.