Current status of robotic adrenalectomy in the United States 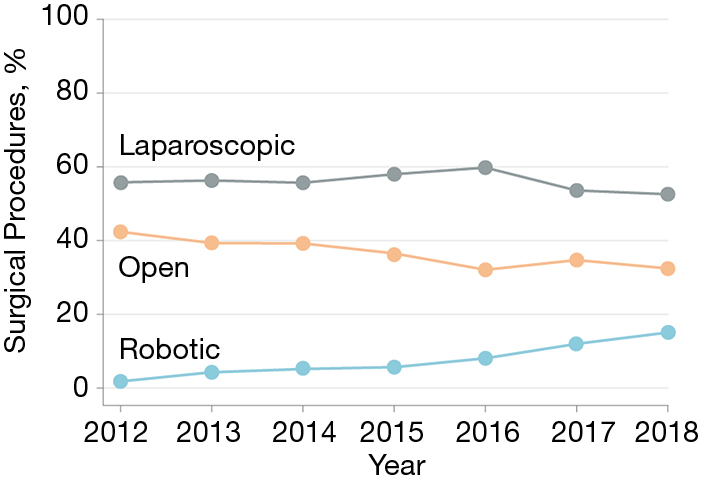 Figure 1 Temporal Trends in the Proportional Use of Robotic, Laparoscopic, and Open Surgery. Data are from the Michigan Surgical Quality Collaborative from January 1, 2012, through June 30, 2018 (7). These data reflect practices at all hospitals included in the study.

There are many possible reasons why robotic adrenalectomy is not rising in popularity as rapidly as some other general surgery procedures. First, adrenalectomy is a low volume operation. According to data from the Nationwide Inpatient Sample there are approximately 6,000 adrenalectomies performed each year in the United States (10). In contrast, data from the same database estimates there are approximately 181,000 ventral hernia repairs performed per year in the United States which translates into a multi-billion dollar industry (11). As with any new technology marketing has played and continues to play an important role in the spread and adoption of robotic technology. Given that the market for adrenalectomies is dwarfed by so many other more common general surgical procedures it stands to reason that the majority of the marketing dollars spent on the robot is not on adrenalectomies.

Without extensive marketing dollars, expansion of robotic adrenalectomy is heavily dependent on availability of the robot, cost of the robot version of the procedure relative to alternatives, and the clinical advantages that the robot offers. As the robotic platform continues to be installed in more hospitals in the United States its availability continues to increase. A simple increase in availability of the robotic platform is thus driving some increase in robotic adrenalectomy cases. However, it is the combination of lack of marketing along with the cost-benefit analysis (perceived or real) that is likely keeping the use of the robot in adrenalectomy from exploding as it has done in hernia repair surgery in the recent past in the United States.

Conflicts of Interest: The author has completed the ICMJE uniform disclosure form (available at http://dx.doi.org/10.21037/gs.2020.03.39). The series “Robotic Adrenalectomy” was commissioned by the editorial office without any funding or sponsorship. The author has no other conflicts of interest to declare.

Ethical Statement: The author is accountable for all aspects of the work in ensuring that questions related to the accuracy or integrity of any part of the work are appropriately investigated and resolved.