Lymphedema after breast cancer treatment affects from 9% to 41% of patients (1). This implies that more than one in five women who survive breast cancer will develop upper extremity lymphedema (2). This condition involves the upper ipsilateral end to the breast affected by cancer.

Associated risk-factors include age, higher body mass index, advanced disease/pathologic stage, axillary lymph node dissection, chemotherapy, radiotherapy, infection, injury, and history of seroma (3-9). Clinically, the protein-rich lymphatic fluid ends up accumulating in the interstitial spaces, producing a progressive swelling of the upper limbs. These symptoms usually appear within the first 2 years after treatment. Moreover, in long-term follow-up, this disease may result in adverse effects, such as pain, skin changes, fibrosis, deformity, functional disability, loss of sensation, heaviness in the arm, distress, and depression (10-13). Therefore, the high costs related to the management of symptoms and adverse effects during outpatient visits and mental health services have an important economic impact in the society.

Several surgical and nonsurgical treatments have been proposed to treat this condition (9,14-17). Surgical treatments include ablative and physiologic operations, in which new connections are created to increase the drainage capacity of the lymphatic fluid (18-20). Surgical techniques have evolved becoming more effective and less invasive (21-23). The aim of this review is to analyze the clinical studies published to date about lymphaticovenular anastomosis (LVA, also called lymphovenous bypass) for upper extremities lymphedema after breast cancer treatment.

The publications were screened manually to identify reports of surgical treatment of upper extremity lymphedema using LVA. Two investigators (the first and the second authors) independently reviewed and extracted data from the papers according to eligibility criteria. 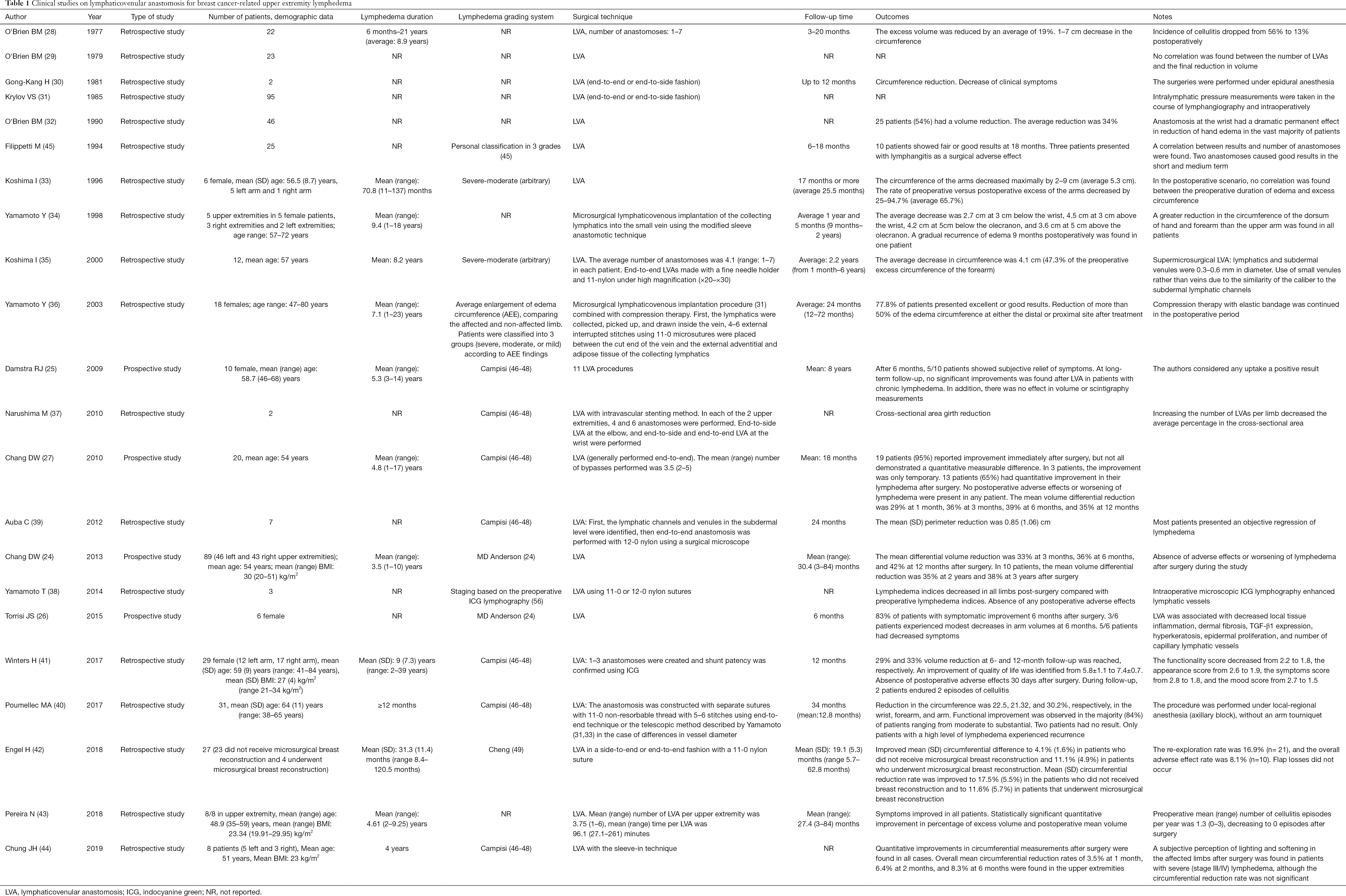 LVA with end-to-end or end-to-side anastomoses was the surgical technique used in 17 studies (24-33,35,38,39,41-43,45), while 3 studies used microsurgical lymphaticovenous implantation technique (34,36,40). The other 2 studies used LVA with the intravascular stenting method (37) and lymphovenous bypass with sleeve-in anastomosis (44). Postoperative follow-up time ranged from 3 months (28) to 84 months (24).

Upper limb circumference and volume change were the most frequently assessed parameters; however, 1 study also considered any scintigraphic uptake as a positive result (25). Outcomes were positive in 21 of 22 studies, with an average objective regression of arm volume around 30%. Subjective clinical improvement was nearly universal, with only 1 study (25) showing no significant improvements in volume or scintigraphic measurements after LVA in long-term follow-up. However, 50% of patients in that study had an initial period of relief of the subjective symptoms (25). One study reported lymphangitis in 3 patients as a surgical adverse effect after LVA (45).

Lymphedema staging was assessed through different classifications over the years (24,45-50). Campisi classification divided patients with lymphedema into 5 stages (46-48). Stage 1a corresponds to absence of edema; stage 1b, to mild swelling that returns to normal after night rest; stage 2, to permanent edema that spontaneously regresses with position; stage 3, to permanent edema that does not regress spontaneously; stage 4, to fibrolymphedema, and stage 5, to elephantiasis with severe extremity deformation (46-48). On the other hand, MD Anderson lymphedema classification is based on indocyanine green lymphangiographic findings, dividing the patients into 4 stages: stage 1 refers to many patent lymphatic vessels with minimal patchy dermal backflow; stage 2, to moderate number of patent lymphatic vessels with segmental dermal backflow; stage 3, to few patent lymphatic vessels, with extensive dermal backflow; and stage 4, to no patent lymphatic vessels observed (24). Cheng (49) established their own grading scale, suggesting disease management according to the grade of lymphedema (i.e., 0-IV), which is divided based on the symptoms (ie, reversible, mild, moderate, severe, very severe), circumference differentiation percentage (ie, circumference of the lesioned limb subtracted from the circumference of the healthy limb and divided by the circumference of the healthy limb), and lymphoscintigraphy (i.e., partial or total occlusion). Despite the heterogeneity of classification systems used between studies, most of them reported positive outcomes after LVA [21/22 (95.4%)].

For several decades, a number of preclinical studies have been conducted in an effort to elucidate the impact of LVA intervention in the upper extremity to alleviate lymphedema. In 1962, Jacobson and Suarez (51) described the possibility of performing an anastomosis between lymphatic vessels and veins in a canine model. Further use of this method in the treatment of early secondary lymphedema was mentioned by Gilbert et al. in a 1976 study also on dogs (52). With this approach, congestive lymphatic fluid can successfully be drained into the cutaneous veins.

In 1977, O’Brien et al. (28) were the first to report a clinical experience using LVA for obstructive lymphedema in humans. In 2000, Koshima et al. (35) described the use of LVA for the treatment of lymphedema in the upper extremities. The results of these preliminary analyses were positive, and have driven the field forward for microsurgery-trained plastic surgeons to address this clinical dilemma.

The most frequently performed technique for the surgical treatment of breast cancer-related lymphedema of upper extremity is LVA with either end-to-end or end-to-side anastomosis; however, others have been reported. In 1998, Yamamoto and Sugihara (34) described microsurgical lymphaticovenous implantation, in which multiple collecting lymphatics are implanted into the small vein through modified sleeve anastomotic technique. In 2019, Chung et al. (44) described their experience performing lymphovenous anastomosis with the sleeve-in technique, used when there are no venules of similar diameter to other lymphatic vessels. This technique attaches a lymphatic vessel with the surrounding adventitia into the wall of the venule by about 0.2 to 0.3 mm, using the pull-out suture technique. Indeed nowadays, supermicrosurgery techniques allow anastomosis of vessels at the capillary level with a diameter of 0.3 to 0.8 mm (35). Controversy still exists regarding the number of anastomoses that would result in significant reductions. Chen et al. (53) proposed their technique by performing between seven to twelve LVA per affected extremity using lymphatic vessels and veins in a range of 0.2 to 0.6 mm.

Krylov et al. (31) were the first to raise concern of intralymphatic pressure. In normal physiology, lymphatic pressure should be lower than venous pressure; consequently, the flow through the anastomosis should be directed in the opposite direction to the desired one. Some surgeons have advocated addressing the problem by performing several LVAs on the same vein, but in the patient affected by lymphedema, the flow is directed in the lymphatic-venous direction due to the pressure in extracellular space from the pressing weight of the accumulated lymphedema. Furthermore, Narushima et al. (37) found that with a high number of LVAs per limb, the mean percentage reduction in the cross-sectional area increased exponentially, while other authors did not find a significant association in long-term follow-up (27,29,30,45).

Lymphatic microsurgery is ideally indicated in early stages, according to the 5-stage Campisi classification (46-48,54). Importantly, microlymphatic surgery is not recommended in primary lymphedema, since the lymphatics are usually hypoplastic (32). Relative contraindications to lymphatic microsurgery include lymphatic-lymph nodal aplasia, diffuse metastatic disease, advanced stage, and no response to conservative therapies.

As with all literature reviews, this study has several limitations. First, there is a general lack of large-volume studies addressing LVA in the upper extremity following breast cancer. Moreover, there was an inability to pool data based on different protocols, varying techniques and measurement of the outcomes for statistical analyses. Despite this, we feel that our study reports valuable pooled data, particularly pertaining to overall positive outcomes in LVA in the upper extremity across 21 of the 22 studies identified. Furthermore, our review is limited by the heterogeneity of the patient populations and classification systems used in the included studies, as well as the English language inclusion criteria. As such, there is a potential for bias in interpreting the data reported in each study, the comorbidity data and reporting outcomes over a long-period of time. Larger, randomized, multicenter studies are warranted to validate the associations found in this review of the literature.

The results of this review of the literature on LVA for breast cancer-related upper extremity lymphedema demonstrated a significant decrease in upper extremity volumes and improvement in subjective findings of lymphedema in most patients. Importantly, this response was maintained in long-term follow-up. There is evidence to suggest great efficacy in LVA in the upper extremity following breast cancer extirpation.

Funding: This study was supported in part by the Plastic Surgery Foundation, and by the Mayo Clinic Center for Individualized Medicine.