Secondary hyperparathyroidism (SHPT) after chronic renal failure (CRF) is predominantly caused by the development of hyperphosphatemia and vitamin D deficiency and resistance (1). Although SHPT can be controlled by medical therapies in most cases, it may progress into drug-refractory types. The SHPT patients who still show increased blood intact parathyroid hormone (iPHT) and uncontrollably high blood calcium and blood phosphorus levels after the use of drugs such as active vitamin D and calcium-like agents can be considered drug-resistant secondary SHPT. When medication fails, surgical intervention is required. Parathyroidectomy (PTX) (2) has been widely adopted as an effective and safe surgery for the treatment of drug-refractory SHPT. It has 3 procedures (2): total parathyroidectomy (TPTX), TPTX + autotransplantation (AT), and subtotal parathyroidectomy (SPTX). Despite their definite short-term efficacy, these 3 procedures will still lead to challenges including persistent hyperparathyroidism (PHPT) or recurrent hyperparathyroidism (RHPT) in the long term. Unlike the risk of the first surgery, reoperation risks can involve patients who have ectopic parathyroid glands, with their associated complex neck adhesions posing a significant challenge to surgeons, in neck operations after the first operation. These complex situations increase the possibility of additional complications in patients undergoing reoperation. Therefore, in order to provide an essential guide to treatment, assessment of the effectiveness and safety of reoperation in SHPT patients is needed. This article summarizes our experience in performing reoperation in 15 patients with drug-refractory SHPT, with an attempt to explore the effectiveness and safety of reoperation. We present the following article in accordance with the STROBE Statement reporting checklist (available at http://dx.doi.org/10.21037/gs-20-391).

PHPT is defined as an intact parathyroid hormone (iPTH) level of greater than 300 pg/mL present immediately after surgery (3). The definition of RHPT is as follows: iPHT below 300 pg/mL within 6 months after a successful primary surgery in an SHPT patient but gradually increasing again after 6 months and exceeding 300 pg/mL, accompanied by corresponding clinical symptoms. Overall, 9 patients in our current study met the above criteria for RHPT, and 6 patients met the criteria for PHPT.

The indications for reoperation included the following (2): (I) iPTH higher than 800 pg/mL; (II) hypercalcemia or hyperphosphatemia unresponsive to drug therapy; (III) parathyroid gland hyperplasia as revealed by ultrasound, gland size diameter >0.5 cm, and richer blood flow or presence of other imaging evidence; (IV) resistance to medication; and (V) presence of at least 2 of the above criteria plus at least 1 of the following conditions: bone pain, skeletal deformity on imaging, anemia that is difficult to correct, and skin itching.

After the operation, the patient's physical signs were closely monitored, and special attention was paid to complications such as postoperative bleeding, dyspnea, numbness of limbs, convulsions, hoarseness, and choking on water. After routine intravenous calcium (Ca) supplementation and use of high-Ca dialysate, the blood Ca was monitored, and Ca gluconate injections (10 mL:1 g) 10–20 mL bid or tid were administered as appropriate. Oral Ca supplementation was started on the second day after surgery comprising common Ca agent (Ca carbonate) 1–2 g bid or tid and active vitamin D3 (calciferol) 0.5–1 µg bid. The use of intravenous Ca dose was gradually reduced after the fourth day until withdrawal.

The general conditions of the patients were recorded. Changes in main biochemical indicators including iPTH, blood Ca, blood phosphorus (P), alkaline phosphatase (ALP), and blood calcium phosphorus product (Ca*P) before surgery and 1 day, 1 week, 1 month, 3 months, and 6 months after surgery were recorded. The postoperative complications and improvements of clinical symptoms were also recorded. The surgery was regarded as successful if the iPTH level was lower than 136 pg/mL (2 times the upper limit of the parathyroid glands in our hospital), and an iPTH level of higher than 300 pg/mL immediately after the operation indicated treatment failure.

Statistical analysis was performed by using the SPSS 22.0 software package. The measurement data are presented as ± SD, and were analyzed with Fisher’s exact test. A P value of <0.05 was considered statistically significant.

The surgically removed parathyroid glands and recurrent glands were consistent with the lesions located by pre-operative imaging examinations. As shown in Table 1, these 15 patients underwent reoperation 42.80±20.84 months (range, 10–72 months) after the primary surgery, Routine pathological examinations identified a total of 25 parathyroid glands, of which 10 were in the neck in situ, 5 were ectopic in the neck, and 10 were in the forearm. The ectopic parathyroid glands were located inside the thyroid gland (n=1), anterior superior mediastinum (n=1), or thymus (n=3). In our series, 7 patients experienced recurrence in situ following SPTX, 2 of whom had ectopic parathyroid hyperplasia; 2 patients experienced intrathymic recurrence after TPTX; and 1 patient suffered from recurrence in the upper mediastinum after TPTX + AT in the forearm. Diffuse hyperplasia was confirmed by postoperative pathology in all these patients. In addition, recurrence of the parathyroid glands was found in the forearm in 4 cases and in the sternocleidomastoid muscle in 1 case; postoperative pathology confirmed the presence of nodular hyperplasia in these patients. There were no major postoperative complications such as postoperative hemorrhage or hypocalcemia. In total, 4 patients experienced transient hoarseness and 1 patient suffered from hypothyroidism. No relapse was found during the 6-month follow-up. All patients completed the research and no patients were lost to follow-up (Figure 1). Surgical treatment significantly improved clinical symptoms including skin pruritus and bone pain. 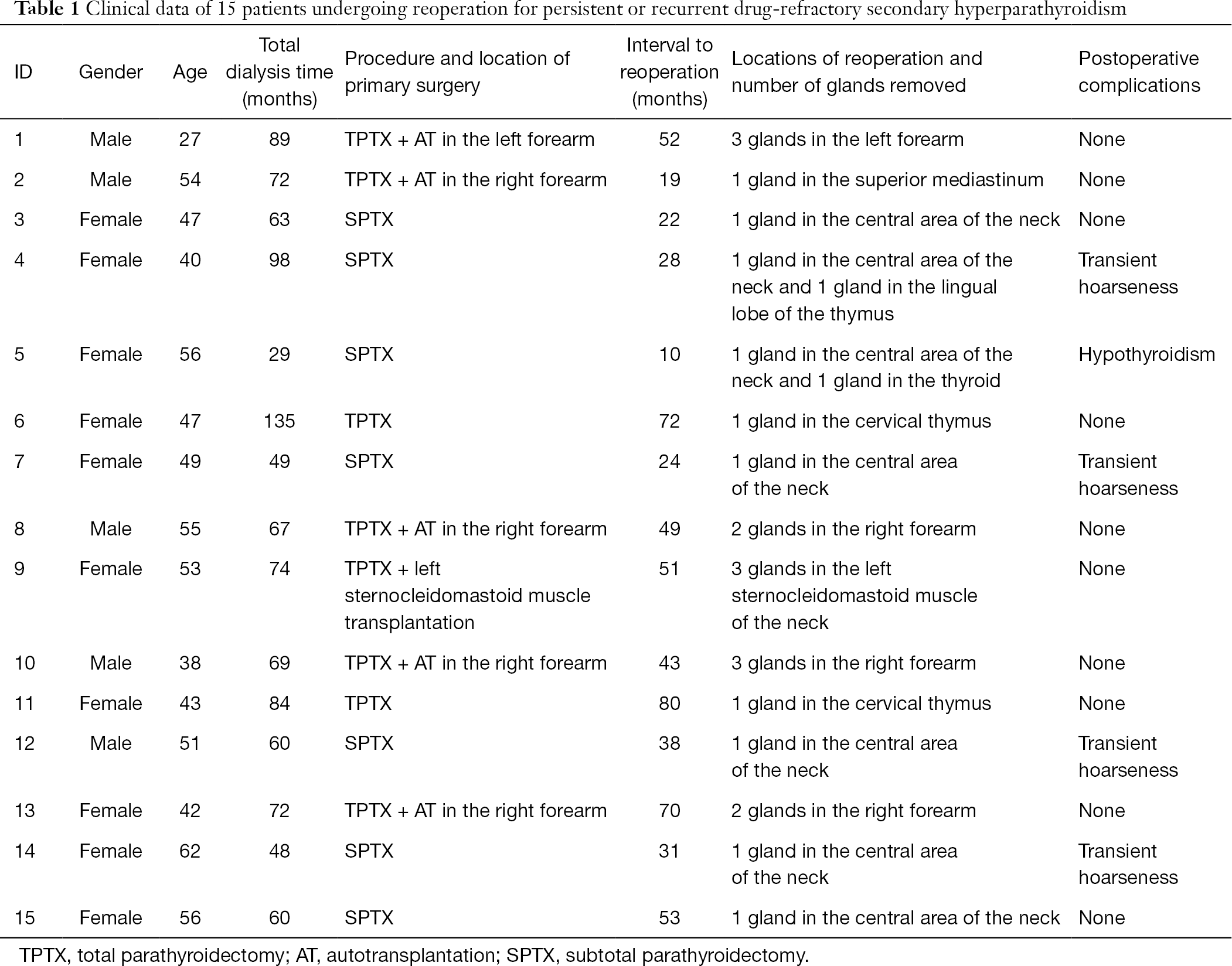 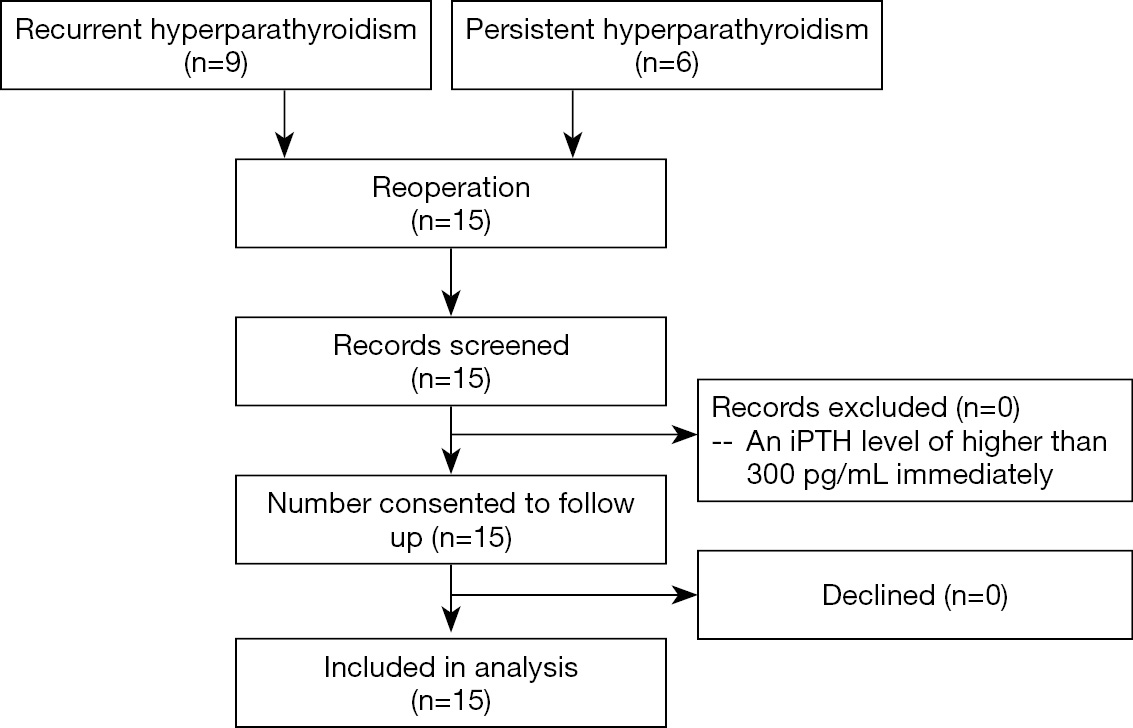 The decrease of iPTH was significantly more remarkable after re-operation than before re-operation (P<0.001) (Table 2 and Figure 2). During the 6-month follow-up, iPTH remained stable (about 100), and no recurrence was reported. Ca, P, and Ca*P decreased after reoperation and then slightly increased, showing significant differences compared with the preoperative results (P<0.05) (Table 2, Figures 3-5). ALP showed a significant downward trend after the reoperation (P<0.001) (Table 2 and Figure 6).

Table 2 Changes of biochemical indicators including iPTH, Ca, P, ALP, and CA*P before and after reoperation for persistent or recurrent drug-refractory secondary hyperparathyroidism
Full table

Figure 3 Blood calcium levels before and after operation.

Figure 4 The trend of blood phosphorus before and after operation.

Figure 5 The trend of calcium phosphorus product before and after operation.

Figure 6 The trend of alkaline phosphatase before and after operation.

Failed parathyroidectomy is often due to inaccurate positioning of the glands before surgery. Humans usually have 4 parathyroid glands, but they may vary in number and location. During the development of the embryo, the parathyroid glands migrate and separate outward from the third and fourth pharyngeal sacs. However, due to the impact of a variety of factors, ectopic migration (to the sublingual area, lower neck, and even the mediastinum) may occur (6,7), especially for the lower parathyroid glands. Inaccurate preoperative positioning often leads to residual parathyroid glands after the primary operation. Therefore, the primary operation remains a key link for SHPT. The currently available imaging techniques for parathyroid glands include color Doppler ultrasound, dual-time-point 99mTc-MIBI imaging, and contrast-enhanced cervical and chest CT scans or MR scans. Each technique has its own advantages and disadvantages in terms of sensitivity and accuracy. The combinations of various imaging modes are encouraged to improve the accuracy of preoperative positioning, especially for ectopic parathyroid glands. It is a useful strategy to reduce recurrence after surgery (8) and to increase the success rate of surgery.

The choice of 3 surgical procedures for SHPT remains controversial. A meta-analysis by Hou et al. (9) showed that the risk of PHPT or RHPT was highest after SPTX and lowest after TPTX; in addition, the recurrence after TPTX + AT might be explained by excessive parathyroid glands in the forearm. The recurrence in our current series was predominantly caused by residual glands after SPTX. Therefore, a more appropriate surgical and transplantation plan may be another key factor in reducing recurrence.

Severe and untreated SHPT can cause various complications such as calcification, bone marrow fibrosis, and cardiovascular disease (10,11). Surgery is currently the only effective treatment for drug-refractory SHPT. Hou et al. (12) showed that the surgical treatment of SHPT could quickly lower blood iPTH level, relieve itching, bone pain, and other symptoms, and help improve anemia and nutritional status. Therefore, PHPT or RHPT after SHPT also needs to be treated by surgery, and reoperation is also an effective and safe strategy. Special attention should be paid to both the thyroid and thymus during the reoperation, whereas the central area of the neck and the mediastinum should not be ignored (6). Reoperation of the neck is more likely to cause surgical complications due to the dense scar tissue, anatomical distortion, and loss of the tissue planes. Since scar adhesion greatly increases the risk of recurrent laryngeal nerve injury (13), the nerves should be carefully protected during the reoperation (2). Meanwhile, for the recurrence in the forearm after SHPT, surgery is simpler and safer. It can be performed under local anesthesia or cervical plexus anesthesia and avoids the complications caused by the neck exploration during reoperation, which greatly improves patient safety.

In summary, reoperation is an effective and safe treatment for drug-refractory SHPT and can be actively applied in clinical settings. When reoperation is planned, multiple imaging studies should be performed to accurately locate ectopic or hyperplastic parathyroid glands. All the possible parathyroid glands must be removed to prevent any recurrence.

Conflicts of Interest: All authors have completed the ICMJE uniform disclosure form (available at http://dx.doi.org/10.21037/gs-20-391). All author report grants from Lishui Science and Technology Bureau, during the conduct of the study.

Ethical Statement: The authors are accountable for all aspects of the work in ensuring that questions related to the accuracy or integrity of any part of the work are appropriately investigated and resolved. The research protocol was reviewed and approved by the Clinical Research Medical Ethics Committee of Lishui Central Hospital, China (no. 2018-82).