The impact of radiation on lymphedema: a review of the literature

Radiation therapy (RT) has a long-established clinical history as a treatment modality in oncology and can extend disease-free survival, overall survival and reduce regional recurrence (1,2). However, RT carries a risk of nerve injury, impaired mobility, fibrosis, chronic pain, lymphedema, telangiectasia, and bone fractures (2). When applied in the thoracic cavity, RT can precipitate pulmonary fibrosis and ischemic heart disease as well (2). One of the most common morbidities of RT is lymphedema (1). In breast cancer, lymphedema affects 1 in 4 patients who undergo RT (3).

Lymphedema is a result of localized fluid retention and tissue swelling secondary to a dysfunction in the lymphatic drainage (3). It is defined by the accumulation of protein rich fluid, resulting in chronic inflammation and reactive fibrosis (4). The lymphatic system maintains fluid equilibrium in interstitial tissue as it continuously drains to the blood stream (3). Lymphedema has immunologic, psychologic, and functional side effects and increases the risk for infection and some malignancies (4,5). This review will examine the role of RT in upper and lower extremity lymphedema.

An online literature search was explored to assess the role of RT in the progression towards lymphedema with a focus on pelvic and breast malignancies. PubMed and MEDLINE were utilized to identify articles in English that investigated or commented on RT and lymphedema up until November 2019. Keywords queried included a various arrangement of the following terms: “radiation”, “radiation therapy”, “lower extremity lymphedema”, “gynecological malignancy”, “breast malignancy”, “reactive fibrosis”, “upper extremity lymphedema”, “breast cancer radiation therapy”, “ovarian cancer radiation therapy” and “endometrial cancer radiation therapy”. Eligibility criteria excluded articles that reported lymphedema progression without the use of RT, abstracts, case reports, presentations, as well as papers not written in English. Additional queries were performed based on relevant references of the searched articles as well.

The lymphatic system consists of an intricate open network of lymph nodes, ducts and sinuses whose primary function is to drain excess interstitial fluid and other particulate matter such as colloid protein that are too large to enter directly into the blood stream (6). The lymphatic system also has an important role immunologically, as lymph nodes are important foci for T and B cells (6,7). The lymphatic system is structured such that afferent lymphatic vessels supply the lymph node with lymph, and lymphocytes are exposed to the lymphatic fluid as it flows through out the node which can activate the adaptive immune system when an antigen is detected (6-8).

The immediate effect of direct radiation energy on lymphatic vessels is minimal as demonstrated in both in vitro and in vivo studies, as structural and functional integrity are maintained (13,14). Damage to the lymphatic vessels occurs in a delayed fashion after radiation as the surrounding tissue develops into dense fibrous tissue that compresses and blocks lymphatic flow (12,13). In addition, lymphatic proliferation is inhibited by RT preventing compensatory lymphatic vessel growth and further promoting lymphedema formation (13). Unlike lymphatic vessels which are insensitive to radiation, lymph nodes are highly radiosensitive (13). In response to radiation, lymph nodes will first become depleted of lymphocytes then undergo fatty change and ultimately fibrosis. Fibrosis of lymph nodes significantly alters their ability to filter lymphatic fluid, as well as increases pressure proximally which promotes lymphedema (15). Furthermore, there is a stronger propensity for the lymph node to transform into fibrous tissue after RT if the nodal basin had contained regional metastasis. Therefore, patients with lymph node metastasis undergoing RT are at an increased risk for lymphedema compared to irradiated patients without lymph node involvement (14,15). In summary, patients with radiation will have lymph node fibrosis with mechanical insufficiency of vessels as well as decreased proliferative capability. These histologic changes coupled with post-surgical inflammation and nodal resection can significantly promote the production of lymphedema as seen in Figure 1. This persistent swelling of lymphatic fluid can lead to fibrosis and increased inflammation as it is an ideal medium for cellulitis and lymphangitis (12). 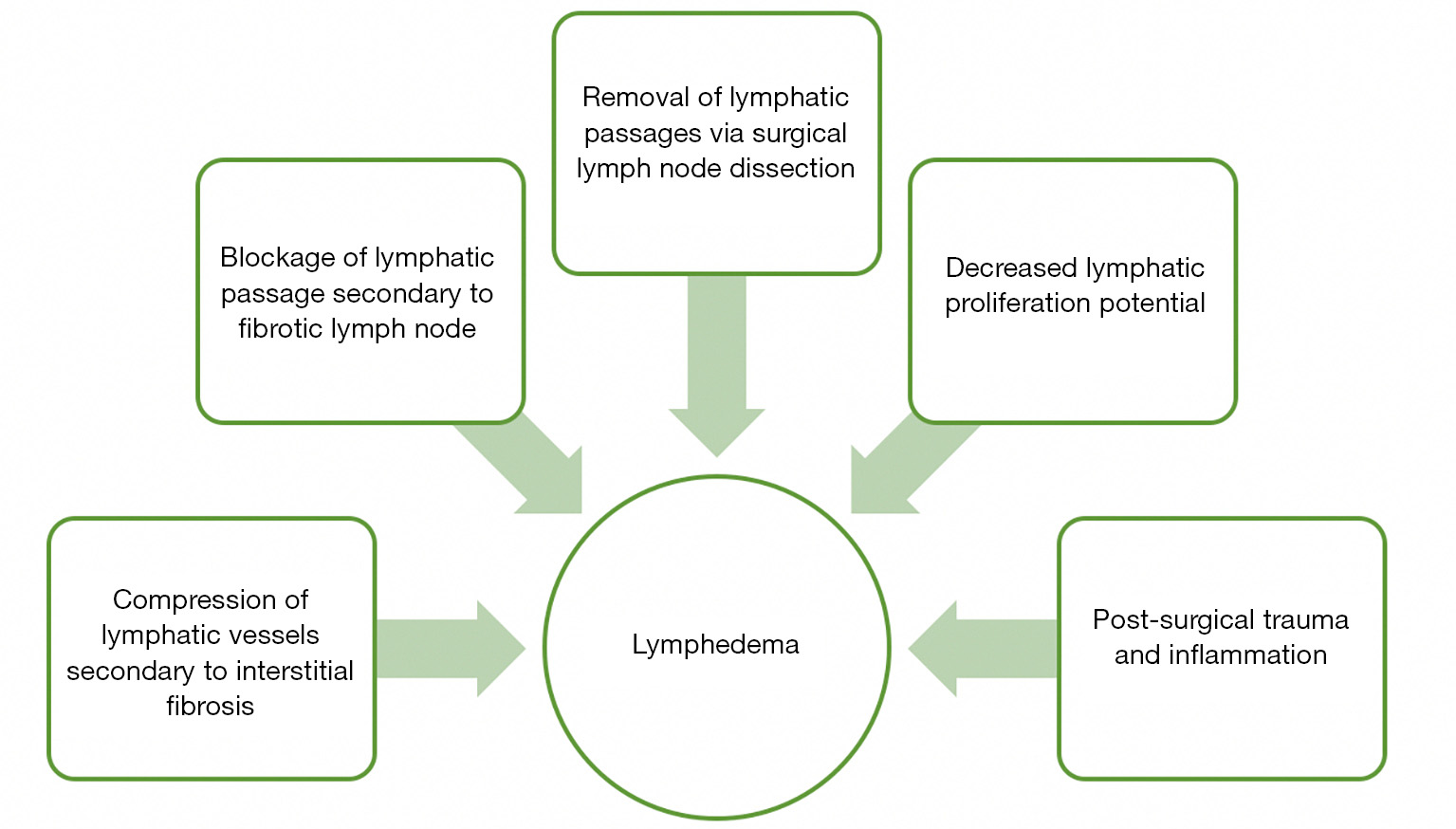 Role of radiation in iatrogenic lymphedema

The specific radiation technique impacts on lymphedema risk as well. Patients exposed to tangential photon radiation, where the breast is wedged between two opposing tangential radiation fields, have a higher risk of lymphedema compared to patients undergoing diffuse chest wall electron beams, in which there is direct application of high energy electrons to the breast (22,28). Furthermore, there is a positive association of lymphedema with increasing total dose of radiation, overlapping radiation fields, and posterior axillary boost radiation (29).

Specific anatomic regions are at increased risk for developing lymphedema than others. Radiation of upper axillary nodal basins at level I, located between the latissimus dorsi to the lateral aspect of the pectoralis minor, and level II, posterior to the pectoralis minor, increased the risk for lymphedema as they contain a higher concentration of lymph nodes (30). More advanced techniques that limit overlapping radiation fields may lessen the risk associated with RT (22).

Volume and distribution of axillary tissue irradiated are independent risk factors for developing lymphedema. Distributing the radiation field such that it excludes axillary levels I/II even if it extends beyond one third of the humeral head reduces the incidence of lymphedema from 37% to 7% in a 5 year period, without increasing the risk of disease reoccurrence (30). Likewise, irradiation of large volumes of axillary tissue correlated with increased lymphedema as more draining passageways are destroyed secondary to the effects of RT (20). In addition to RT technique, systemic risk factors such as obesity increase risk of lymphedema. A body mass index >30 increases the risk of lymphedema development in post mastectomy RT by almost 3 times compared to a non-obese patient (31).

RT has also been found to increase the risk of lower limb lymphedema in patients with gynecological cancers such as ovarian, vulvar, and endometrial carcinoma (32-35). Lower limb lymphedema follows dysfunction in the pelvic and inguinal nodes (8). Post-operative RT in this region increases lymphedema risk by up to 40% (34,36-39). Unlike axillary RT, one study found that neither radiation dose nor length of delivery affect lymphedema rates (33). However, RT delivery technique does seem to impact lower limb lymphedema rates, as external beam RT was associated with increased risk of lymphedema compared to vaginal brachytherapy, where the radiation is delivered from inside the vagina.

For most gynecological cancers there are two modes of RT: external beam radiation and brachytherapy. Vaginal brachytherapy is able to provide targeted high dose radiation to gynecological malignancies while shielding nearby organs from unnecessary radiation given that radiation doses decreases by the inverse of the distance from the source squared (40). External beam radiation is provided as intensity modulated RT (IMRT) utilizing multiple external targeted low dosage radiation beams to concentrate at the tumor foci sparing normal tissue (41). However, IMRT involves larger radiation fields and despite it theoretically sparing normal tissue has been associated with “radiation induced second cancers” (42). Depending on the type, stage and location of the tumor these two RT modalities are often used in conjunction with chemotherapy (43). The risk associated with lower limb lymphedema in patients receiving vaginal brachytherapy has been estimated at 11% compared to a risk of 71% following pelvic external beam RT (44-47). Delivering RT through pelvic external beam increases risk of lower extremity lymphedema by five times (34).

Overall, the benefits of RT greatly outweigh the risks for appropriately selected patients. Ragaz et al. discovered a 33% reduction in recurrence and a 29% reduction in mortality among women with stage I/II breast cancer who received RT with chemotherapy compared to those who received chemotherapy alone after mastectomy (17). Several cancer institutes in North America such as in the United States and Canada supports RT in early stage breast cancer with high risk node metastasis because of this documented reduction in cancer recurrence; and in the United States, RT is an integral component in breast conserving therapy due to its increased benefits when compared to just chemotherapy alone (48-50). Yao et al. studied over 20,000 patients with triple negative breast cancer, and found that patients with RT had a smaller tumor size, better breast cancer specific survival and overall survival rates when compared to patients with no RT (51). Likewise, gynecological RT also has a significant positive impact on increased survival and reduced local recurrence (52-54).

Given the lack of precise consensus on definitions or grading systems for lymphedema, clinicians and investigators have used a wide variety of independently developed, subjective, and objective diagnostic criteria. Lack of consensus has created inconsistencies in the literature on the definition of lymphedema as well as diagnosis techniques (55-57). For instance, the widely used arm circumference technique to assess upper extremity lymphedema has been shown to be highly inaccurate (23). While taking an accurate history and conducting a thorough physical examination are critical in diagnosing lymphedema, more objective measures need to be utilized. There are several recently published methods utilized to diagnose lymphedema.

Objective techniques used to diagnose lymphedema include ultrasound, tonometry, bioimpedance, and optoelectric perometry. Tonometry measures tissue pressure by evaluating the resistance of the tissues when compressed. The degree of compressibility has been correlated with the degree of lymphedema. Since there are no standard protocols, this technique has low reliability (58,59). Bio-Impedance is a non-invasive technique that directly measures lymph fluid volume through the impedance to an electrical current (55,58,60-62). Perometer is a noninvasive optoelectronic sensor that uses infrared light to measure the lymph volume of the limb (63-66). It is highly sensitive and reducible and can detect subclinical lymphedema within 2–3 minutes (63,65-68).

Radiologic studies include lymphoscintigraphy (LSG), magnetic resonance imaging (MRI), MR lymphangiography, fluorescein lymphangiography, near-infrared fluorescence imaging and computed tomography (CT). These imaging techniques can also be used to further support the diagnosis in complex presentations as is common for irradiated cancer patients. These imaging studies assess the lymphatic system either directly or indirectly by assessing function. However, most diagnose lymphedema by assessing the unique sequalae associated with lymphatic dysfunction, such as the development of fibrosis or impedance (68). Many consider the most objective standard method to diagnose lymphedema is through LSG.

Common to review articles, there are several limitations to this paper. Only journals published in the English language were assessed in this review. In addition, there is a possible bias in interpreting the results discussed in each article. While this review article discussed various radiation delivering modalities, specific RT protocols and their effect on lymphedema progression were not assessed in detail. Further studies should focus on the impact of differing RT protocols for breast and gynecological cancers on lymphedema progression.

RT is an integral tool for treating certain cancers, as it extends disease-free survival, overall survival and reduces regional failure. However, RT increases the risk of lymphedema through multiple avenues as discussed specifically for breast and gynecological cancers. Decreasing the proliferative potential of lymphatic tissue, mechanical insufficiency of lymphatic vessels and lymph node fibrosis are some of the many ways RT leads to lymphedema. It is thus integral to understand the effect radiation has on the lymphatic vessels and glands, in order to individually weigh the costs versus the benefits and better inform patients clinically.

Conflicts of Interest: All authors have completed the ICMJE uniform disclosure form (available at http://dx.doi.org/10.21037/gs.2020.03.20). The series “Lymphedema” was commissioned by the editorial office without any funding or sponsorship. XL serves as the unpaid editorial board member of Gland Surgery from Aug 2019 to Jul 2021 and served as the unpaid Guest Editor of the series. The other authors have no other conflicts of interest to declare.