Primary scrotal lymphedema is a form of lymphatic dysplasia resulting in the dysfunction of lymphatic drainage that is usually accompanied by lower limb edema (1). With progression, the scrotum becomes swollen, and the scrotal skin becomes thickened and tough losing its elasticity and contractility. The penile skin, when involved, also becomes thickened and prone to infection. Due to the large volume of the lymphedematous scrotum, the penis and prepuce may retract into the surrounding edematous tissue, even becoming buried in the thickened scrotal dermis. This frequently results in difficulties in moving, socializing, performing sexual intercourse, and standing during urination (2). Conservative therapy may be effective for patients with early-stage scrotal lymphedema. However, surgical intervention is necessary for those with advanced disease in whom the disorder is disabling and persistent. We have previously introduced magnetic resonance lymphangiography (MRL) for the assessment of the lymphatic system of genital lymphedema (3). Using MRL, we evaluated more accurately the structural and functional abnormality in genital lymphedema, as well as be able to assess the postoperative outcomes through long-term follow-up. In this study, we present the experience of surgical treatment of genital lymphedema and long-term follow-up observation of MRL examinations. Forty patients with primary genital lymphedema were retrospectively reviewed. Their treatment outcomes are summarized herein.

From April 2010 to November 2019, 40 patients diagnosed with primary genital lymphedema were involved in the study. The average age of the patients was 35 (range, 18–68) years. Patient characteristics are summarized in Table 1. All patients had no history of trauma, surgery, radiotherapy, filarial contact. Written informed consent was obtained from all patients. This study was approved by the research and ethics committee of the Shanghai Ninth People’s Hospital. 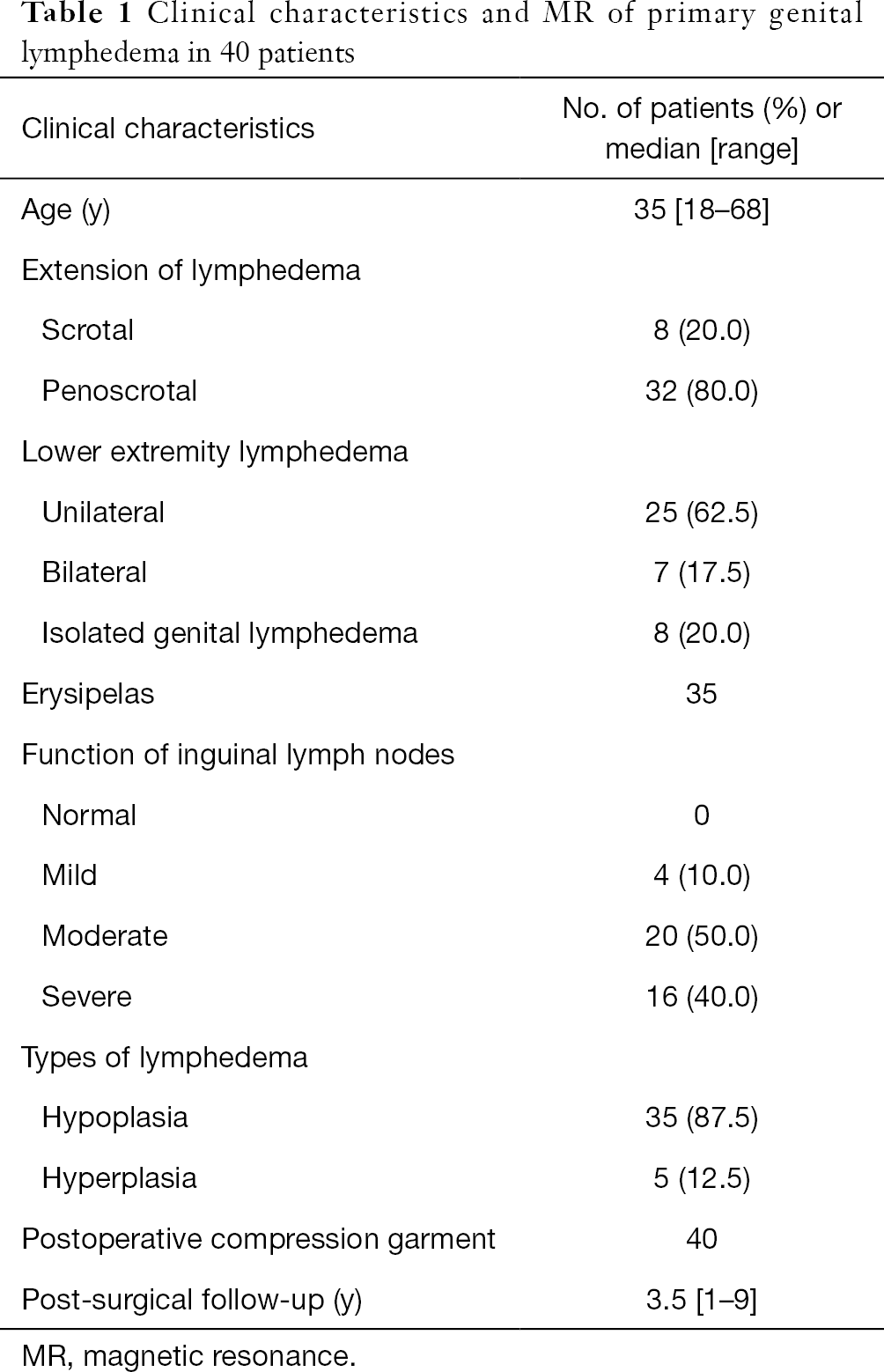 Primary genital lymphedema was diagnosed based on medical history, clinical manifestations and MRL imaging. MRL was performed as previously described to evaluate the morphology and function of the scrotum and inguinal lymphatic system (3). Briefly, Paramagnetic contrast medium gadobenate dimeglumine (gadolinium benzyloxypropionic tetra-acetate, Gd-BOPTA, MultiHance, Bracco, Torino, Italian) was injected intracutaneously into the base of the scrotum, with 1 injection in each side. MR examinations were performed using a 3.0-T MR unit (Philips Medical System, Best, The Netherlands). For dynamic contrast-enhanced MRL, 3D fast spoiled gradient recalled echo T1-weighted images with a fat saturation technique were acquired before and 3, 6, 9, 12, 15, 18, and 21 minutes after contrast injection. The type of lymphedema as well as the function of inguinal lymph nodes listed in Table 1 were defined by MRL as previously described (3). One day prior to surgery, skin preparation was performed by cleaning the perineum. Vitamin K was administered prior to the operation to reduce bleeding caused by coagulation disorders. Antibiotics were administered 30 minutes prior to surgery to prevent the occurrence of infections.

Postoperatively, antibiotics and hemostatics were routinely administered for 72 hours. The dressing was routinely changed in the surgical area. The amount and color of drained fluid were recorded daily. The drains were removed when the amount becomes less than 10 mL/per day. Sutures and catheters were removed 7–10 days postoperatively. Pre and immediate postoperative photographs are shown in Figure 1. Compression garment was an effective supplement to maintain lymphedema reduction post-treatment. We recommended all patient wear a self-designed elastic pocket post-surgery (Figure 2). For those with lower limb lymphedema, compression garments for lower extremity was also recommended. Post-surgical follow-up ranged 1–9 years. Follow-up MRL was performed in most patients.

The major outcome evaluation was listed in Table 2. A total of 40 patients underwent surgery, with surgical excision involved debulking the scrotum in 8 (20%) patients and penoscrotal reduction in 32 (80%) patients. The length of hospital stay was between 7 to 20 days. The weight of the excised specimen was between 1.2–3.9 kg. One (2.5%) patient had postoperative scrotal hematoma and was treated with open surgical hemostasis. Two (5%) patients showed poor wound healing required regular change of dressing and antibiotic treatment. No cases of infection, or scar hyperplasia occurred after surgery. During follow-up period, there was no recurrence of edema or erysipelas. Due to the difficulty in volume assessment, we didn't measure the volumes of scrotum and penis, though the shape of the scrotum and penis greatly improved. Among the patients, 5 recovered to close to normal, and their sexual function was restored or even enhanced. In follow-up MRL, new formation or reopen of lymphatic drainage can be detect in 25 (62.5%) patients. All patients showed decreased area of dermal backflow of the contrast. 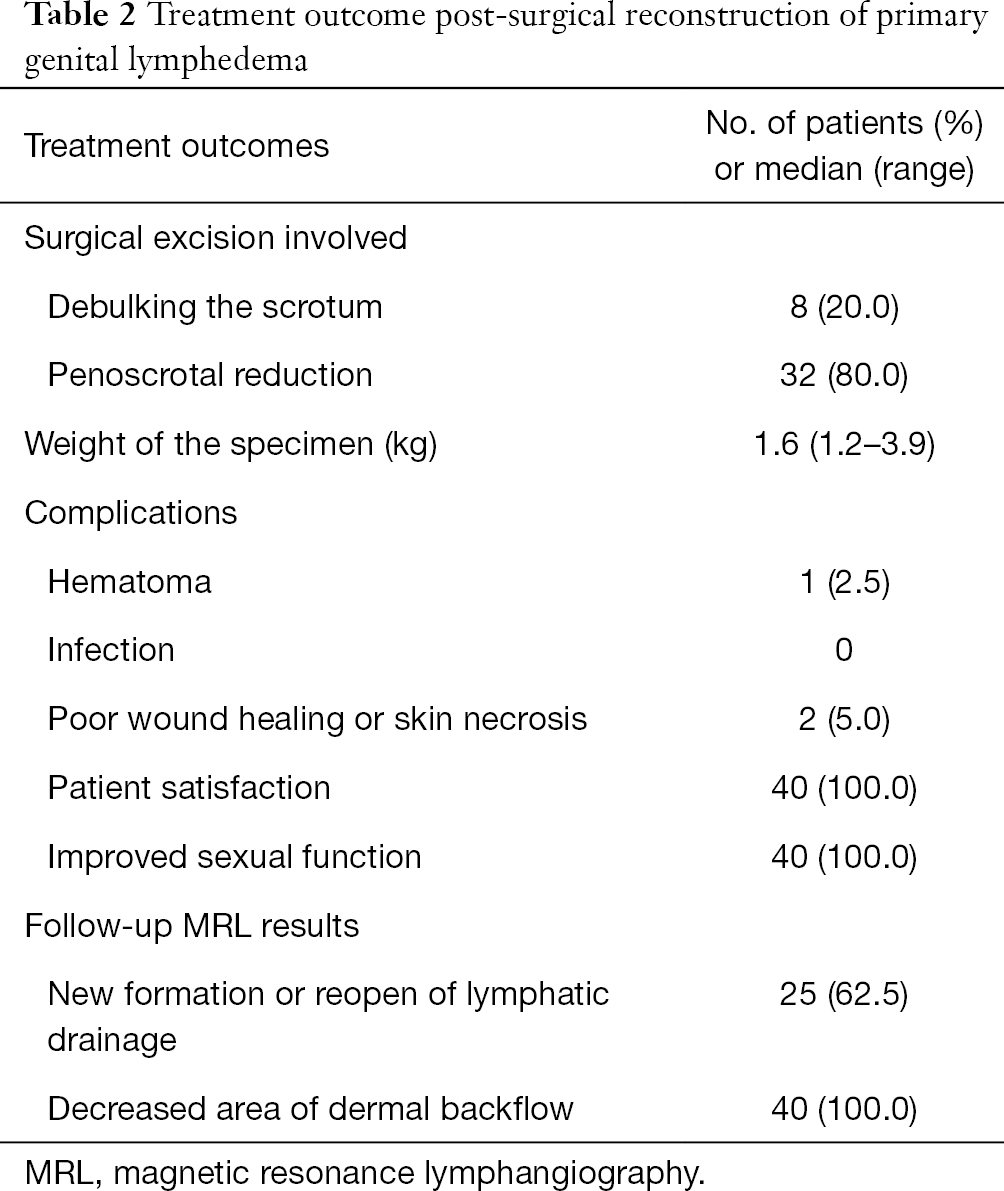 In 2010, a 30-year-old male patient with a 23-year history of genital and lower limb swelling presented to the hospital. The patient was preoperatively diagnosed with primary penoscrotal lymphedema at our hospital. MRL was performed to evaluate the morphology and function of the scrotum and inguinal lymphatic system. After no obvious surgical contraindications were confirmed, the operation was performed under general anesthesia according to the abovementioned surgical procedure. The operation was successful and the patient recovered well. To date, the patient has been followed up for 9 years. During that period, MRL was performed many times to evaluate the patient’s condition; new formation of scrotal lymphatic drainage was detected, and there was no sign of recurrence (Figure 3). The 3- to 5-year follow-up MRL images of this case have been recorded in our previous studies (3).

Figure 3 A 30-year-old male patient with a 23-year history of genital lymphedema underwent surgical excision and scrotal reconstruction. (A) Preoperative appearance of the scrotum and penis; (E) appearance of the scrotum and penis 9 years postoperatively; axial (B,F) and coronal (C,G) T2WI-FS of the scrotum. Preoperative MRI examination clearly displays thickened skin and subcutaneous tissue and massive edema under the tunica vaginalis. A large, well-demarcated subcutaneous edematous area extending from the anterior scrotum to the base of the penis (B,C); 9 years after surgery, nearly normal scrotal skin and subcutaneous tissue can be seen surrounding the testis and spermatic cord postoperatively (F,G); MRL displays accumulated edematous fluid distal to the lymphatic occlusion in the lymphedematous scrotum that partly flows back to the normal inguinal lymph nodes before surgery (red arrows) (D); a 9-year postoperative MRL examination showed lymphatic fluid flowing back to the proximal lymphatic vessels and no trend of recurrent edema during long-term follow-up (yellow arrows) (H). MRL, magnetic resonance lymphangiography; T2WI-FS, fat suppressed T2WI.

The second case is a 17-year-old male patient with congenital penoscrotal lymphedema and concomitant lymphedema of the right lower extremity. Surgical excision of the edematous subcutaneous tissue and reconstruction of the penis and scrotum were performed. MRL was performed to evaluate the morphology and function of the scrotum and inguinal lymphatic system pre- and postoperatively. At a follow-up visit 2 years postoperatively, the patient had an excellent cosmetic outcome with no sign of recurrent lymphedema (Figure 4).

Primary lymphedema is relatively rare and is due to congenital lymphatic dysplasia resulting in dysfunction of the lymphatic drainage. The incidence of primary lymphedema is approximately 1.15/100,000 under the age of 20 (4). Primary lymphedema can be classified according to age of onset: lymphoedema congenital occurs at birth or before 3 months (10–20%); lymphoedema praecox occurs before 35 years (80%); and lymphoedema tarda occurs at an advanced stage (after 35 years) (5). Primary lymphedema of the genitalia is rare and is usually associated with progressive lower limb lymphedema, which is most commonly affected congenitally. This condition negatively impacts both patient physiology and psychology. The edematous genitals have a grotesque appearance, leading to extreme inconvenience to the patient. Severe skin infections, cellulitis, and lymphangitis often occur. To a large extent, patients suffer from an inferiority complex and depression. However, due to the lack of effective imaging diagnosis and surgical treatments for primary genital lymphedema, methods to restore the appearance and function of the genitals pose a great clinical challenge.

For decades, lymphoscintigraphy has been the primary imaging technique for diagnosis. However, its low resolution fails to clearly reveal the morphology of the lymphatic vessels. Besides, this method has potential side effects, including invasiveness, a long examination time, radiation exposure, and complications of pulmonary embolism and local wound infection, which limit its clinical application (6). Our department first presented an analysis of contrast MRL with gadobenate dimeglumine for the diagnosis of lymphatic disorders 10 years ago (7). Since then, MRL has been used for detecting lymphedema, as it can more clearly reveal the morphological characteristics of the lymphatics. For the evaluation of genital lymphedema, the MRL images clearly revealed the extent of the affected tissue and obstruction of the lymphatic system. MRL also provides anatomical basis for preservation of the dermal lymphatic tissue flaps and complete resection of the edematous tissue. Since the examination is minimally invasive and does not require radiation exposure, MRL can be used for routine follow-up after surgery. Postoperative MRL provides an objective method to evaluate the improvement of lymphatic drainage after reconstruction.

During the volume reduction surgery, improvements were made on the basis of Charles’ procedure: (I) we discarded skin grafting and applied the adjacent scrotal and penile skin for suturing to effectively protect the skin and superficial lymphatic tissue from damage; (II) the scrotal septum and bottom skin flap were retained during surgery so that improved morphology could be achieved to prevent testicular torsion; (III) the inversion of the tunica vaginalis can improve the spermatogenic environment and reduce the chance of testicular hydrocele; (IV) subcutaneous lymphatic tissue flaps were retained and bridged to the affected side to restore and improve lymphatic drainage. We recommend that patients wear self-designed elastic bandage-based pockets to maintain satisfactory postsurgical results. In addition, Postoperative care and conservative treatment are recommended supplements. In our series, there were no signs of postoperative recurrence of volume enlargement. MRL images showed new formation or reopen of lymphatic drainage, as well as decreased area of dermal backflow. All these results indicate that the abovementioned procedures are important and necessary to maintain the long-term efficacy. During surgery, the most important procedure is hemostasis, especially in the scrotal septum. Careful ligate the remnant tissue of this area is imperative to avoid massive hemorrhage.

In this study, we present the experience of modified Charles procedure in the treatment of genital lymphedema. Although surgical reconstruction is proved to be a safe and effective management option for genital lymphedema, objective evaluation of the outcome is still inadequate. Further studies on the assessment of long-term tissue alterations, such as skin thickness, dermal water content, skin fibrosis as well as scrotal volume changes should be considered.

When genital lymphedema develops, surgical treatment is necessary. While reconstructing an aesthetic appearance, to retain the scrotal septum and dermal lymphatic composite tissue flaps can improve the function of lymphatic drainage.MR lymphangiography could serve as a safe and accurate method to evaluate lymphedema prior to and after surgery.

Conflicts of Interest: All authors have completed the ICMJE uniform disclosure form (available at http://dx.doi.org/10.21037/gs.2020.03.19). The series “Lymphedema” was commissioned by the editorial office without any funding or sponsorship. The authors have no other conflicts of interest to declare.

Ethical Statement: The authors are accountable for all aspects of the work in ensuring that questions related to the accuracy or integrity of any part of the work are appropriately investigated and resolved. This study was approved by the research and ethics committee of the Shanghai Ninth People’s Hospital (Registration number: 201835). Written informed consent was obtained from all patients.