Papillary thyroid carcinoma (PTC) is the most commonly occurring thyroid malignancy. Its incidence has been increasing with the high detection rate of papillary thyroid microcarcinoma (PTMC), characterized by a maximum tumor size ≤1 cm, through high-resolution ultrasonography (US)-guided fine-needle aspiration cytology (FNAC). The reduction in the surgical extent for PTMC has shifted because lobectomy is suitable for PTC patients with a tumor size <4 cm (1). Active surveillance has emerged as an alternative option for low-risk PTMC (2). Accordingly, mutual communication between physicians and patients is important in the selection of active surveillance versus surgery. Minimization of the surgical extent and performance of appropriate follow-up may be reasonable for patients who have anxiety regarding active surveillance.

Although LN involvement is commonly observed in patients with PTC at the time of the first diagnosis (3), the detection rate of LN involvement using preoperative imaging modalities is lower in the central compartment than in the lateral neck compartment, owing to the anatomical location (air-filled trachea and the thyroid gland itself). In addition, the use of prophylactic central neck dissection (CND) for patients with clinically LN-negative PTC is debatable. Although bilateral prophylactic CND is helpful in decreasing the rate of locoregional recurrence (4), it could be associated with increases in the rate of postoperative complications (5,6). Complications occurring after the resection of thyroid gland and LNs are not commonly observed in patients who have undergone thyroid lobectomy or hemithyroidectomy, possibly because the contralateral thyroid gland may not have been evaluated. It is necessary to determine the efficacy of prophylactic unilateral CND in terms of locoregional recurrence. However, few studies have evaluated the impact of prophylactic unilateral CND on PTMC in cases with hemithyroidectomy. Therefore, the current study aimed to assess the relationship between prophylactic unilateral CND and recurrence-free survival (RFS) and to evaluate the prognostic factors associated with recurrence in patients with PTMC who had undergone hemithyroidectomy.

We reviewed the electronic medical records of 5,448 patients with PTMC who had undergone thyroid surgery at Chonnam National University Hwasun Hospital between 2004 and 2012. Patients were excluded if they met the following criteria: had undergone total or near-total thyroidectomy, were followed-up for <1 year, had experienced recurrence within 6 months because of the possibility of residual or persistent disease, had pathologic results confirming disease other than classical PTC, had secondary malignancies preoperatively or postoperatively, had contralateral thyroid nodules, had clinically positive LN in the central or lateral neck compartment, had abnormal thyroid function test results, and had missing clinicopathological values. A total of 1,071 patients with PTMC who had undergone hemithyroidectomy with or without prophylactic unilateral CND were enrolled. This retrospective study was approved by the institutional review board of Chonnam National University Hwasun Hospital, and the need for informed consent from patients was waived. Data on the patients’ clinicopathological characteristics, postoperative complications, and recurrence were collected.

All suspicious thyroid nodules were evaluated via FNAC. In order to evaluate the LN involvement in the central or lateral neck compartment, all patients underwent preoperative US and computed tomography (CT). Hemithyroidectomy included resection of one lobe of the thyroid, isthmus, and pyramidal lobe. Prophylactic unilateral CND was performed at the surgeon’s discretion. CND involved removal of the pretracheal, paratracheal, and prelaryngeal LNs. Endoscopic surgery was performed via the bilateral axillo-breast approach. Experienced pathologists measured the tumor size using surgical specimens. Chronic lymphocytic thyroiditis (CLT) was defined as the presence of diffuse lymphocytic infiltration in the surgical specimen. Minimal extrathyroidal extension (ETE) was defined as cancer extending into or just beyond the thyroid capsule, but not into any structures in the neck. The N stage of patients who underwent only hemithyroidectomy was Nx, whereas the N stage of patients who underwent prophylactic CND was classified as N0 and N1a according to LN involvement.

All patients were followed-up at the hospital every 6 months for the first 2 years and then annually thereafter. Patients who were followed-up for longer than 10 years underwent regular check-ups every 2 years. Physical examinations, thyroid function tests [triiodothyronine, free thyroxine, and thyroid stimulating hormone (TSH)], thyroglobulin (Tg) and anti-Tg antibody levels tests, and US were performed at every visit. CT was selectively performed for patients with increasing levels of Tg or anti-Tg antibody irrespective of whether structural disease was observed on US during the follow-up. Locoregional recurrence was defined as the presence of visible disease in the remnant thyroid, central compartment, and lateral compartment. All structural recurrences were confirmed using US-guided FNAC.

Hypocalcemia was defined as the presence of a below-normal total calcium level (reference range, 8.0−10.2 mg/dL) regardless of the parathyroid hormone level. Hypoparathyroidism was defined as the presence of a below-normal postoperative serum parathyroid hormone level (reference range, 8−51 pg/mL) with a concomitant low calcium level. The total and ionized calcium levels were examined along with the parathyroid hormone level at 6 hours, 1 day, and 2 days after surgery. Patients who had developed hypoparathyroidism were prescribed calcium carbonate and calcitriol depending on their individual needs. Flexible laryngoscopy was not indicated for all patients for the evaluation of vocal cord palsy; however, patients with suspicions of recurrent laryngeal nerve (RLN) injury during surgery or who had developed voice changes postoperatively underwent flexible laryngoscopy. Hypoparathyroidism and RLN injury were classified as transient if the associated symptoms resolved within 6 months after surgery; they were classified as permanent if the associated symptoms resolved after more than 6 months. Postoperative bleeding was defined as bleeding requiring surgical intervention.

RFS was defined as the time between surgery completion and the occurrence of recurrent disease. Continuous variables were presented as median (range) or mean (standard deviation), whereas categorical variables were presented as number (percentage). When comparing patients according to CND, an independent t-test was used for continuous variables and a chi-square test for categorical variables. The optimal cutoff tumor size was calculated using receiver operating characteristic curves. A univariate Cox proportional hazards model was used to analyze the relationship between clinicopathological variables and RFS. Multivariate Cox proportional hazards regression was performed using the backward elimination method. All statistical analyses were performed using SPSS version 23.0 (IBM Inc., Armonk, NY, USA). Statistical significance was defined as P≤0.05.

Table 1 shows the clinicopathological characteristics of all patients. Of the 1,071 patients who underwent thyroid hemithyroidectomy, 217 (20.3%) were men. A total of 613 patients underwent hemithyroidectomy only (Nx stage, i.e., the no CND group), whereas 458 underwent hemithyroidectomy plus prophylactic unilateral CND (i.e., the CND group). Of the patients who underwent CND, 363 (33.9%) had N0 stage disease and 95 (8.9%) had confirmed N1a stage disease. Of the 1,071 patients, 19 and eight patients in the no CND group and CND group, respectively, developed recurrence. Of the 27 patients with recurrence during the follow-up period, 21 showed recurrent disease within 5 years after the initial surgery. Recurrent lesions were most commonly observed in the contralateral thyroid. Lateral neck LN recurrences were ipsilateral primary tumors. None of the patients developed distant metastases (Figure 1). 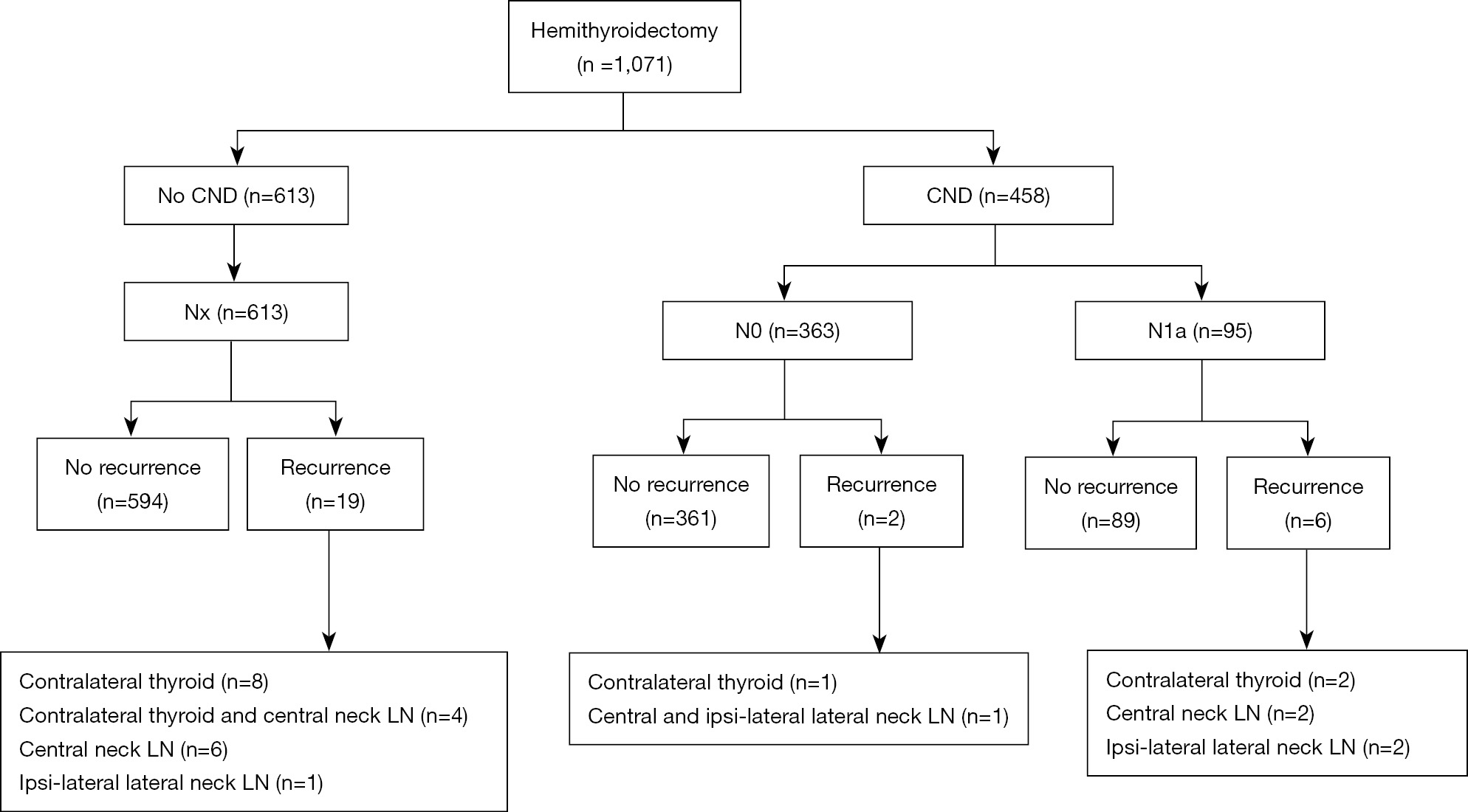 Comparison according to prophylactic unilateral CND 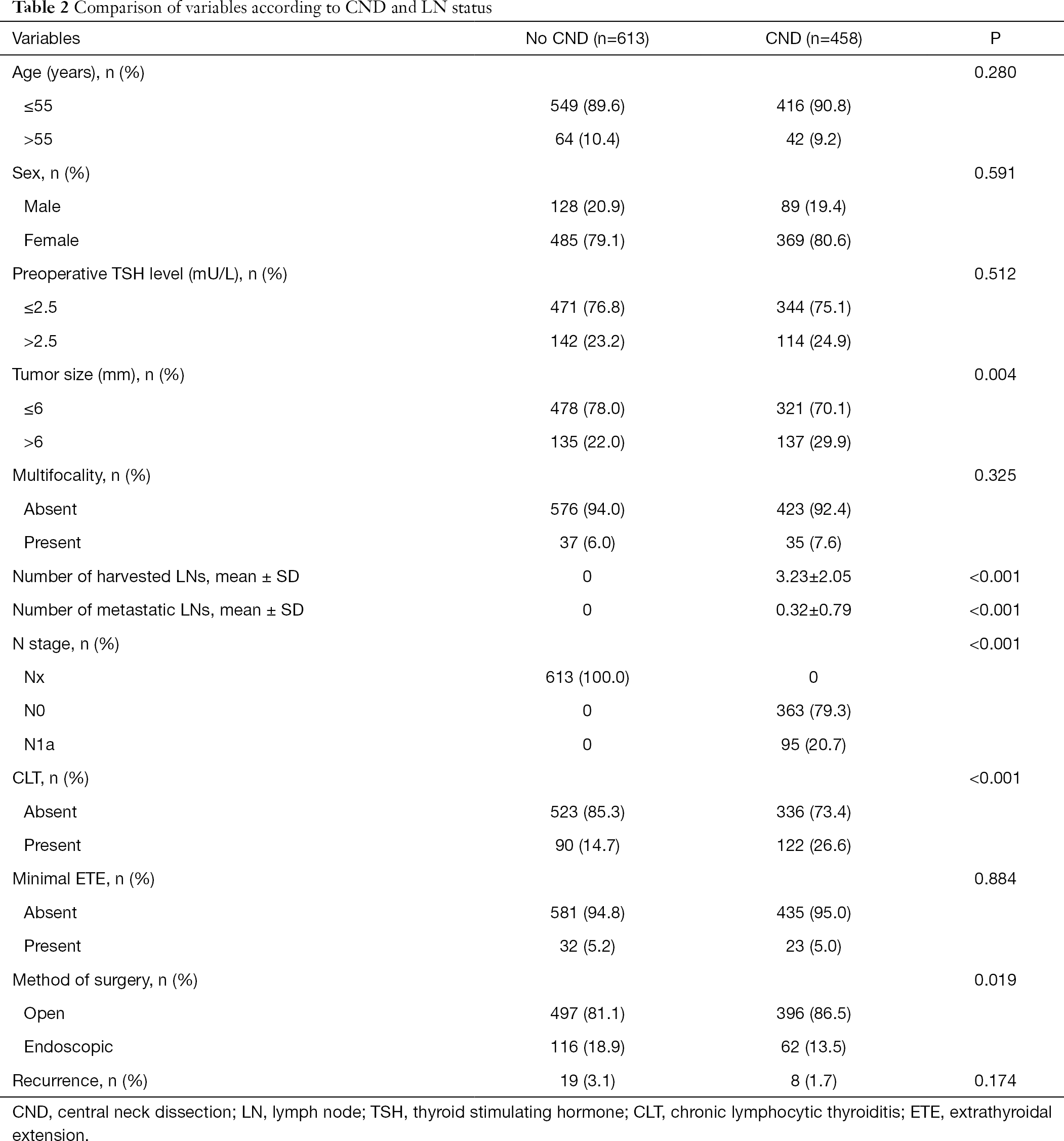 Univariate and multivariate analyses according to recurrence

Univariate analysis revealed that a tumor size ≤6 mm (vs. >6 mm, P=0.008) was associated with better RFS. However, the performance of unilateral CND did not decrease the rate of recurrence. In addition, patient age, sex, preoperative TSH level, multifocality, CLT, minimal ETE, and the method of surgery were not correlated with a better RFS. In the multivariate analysis, patients with a tumor size ≤6 mm [hazard ratio (HR), 2.927; 95% confidence interval (CI), 1.372−6.245; P=0.005] had favorable RFS (Table 3). 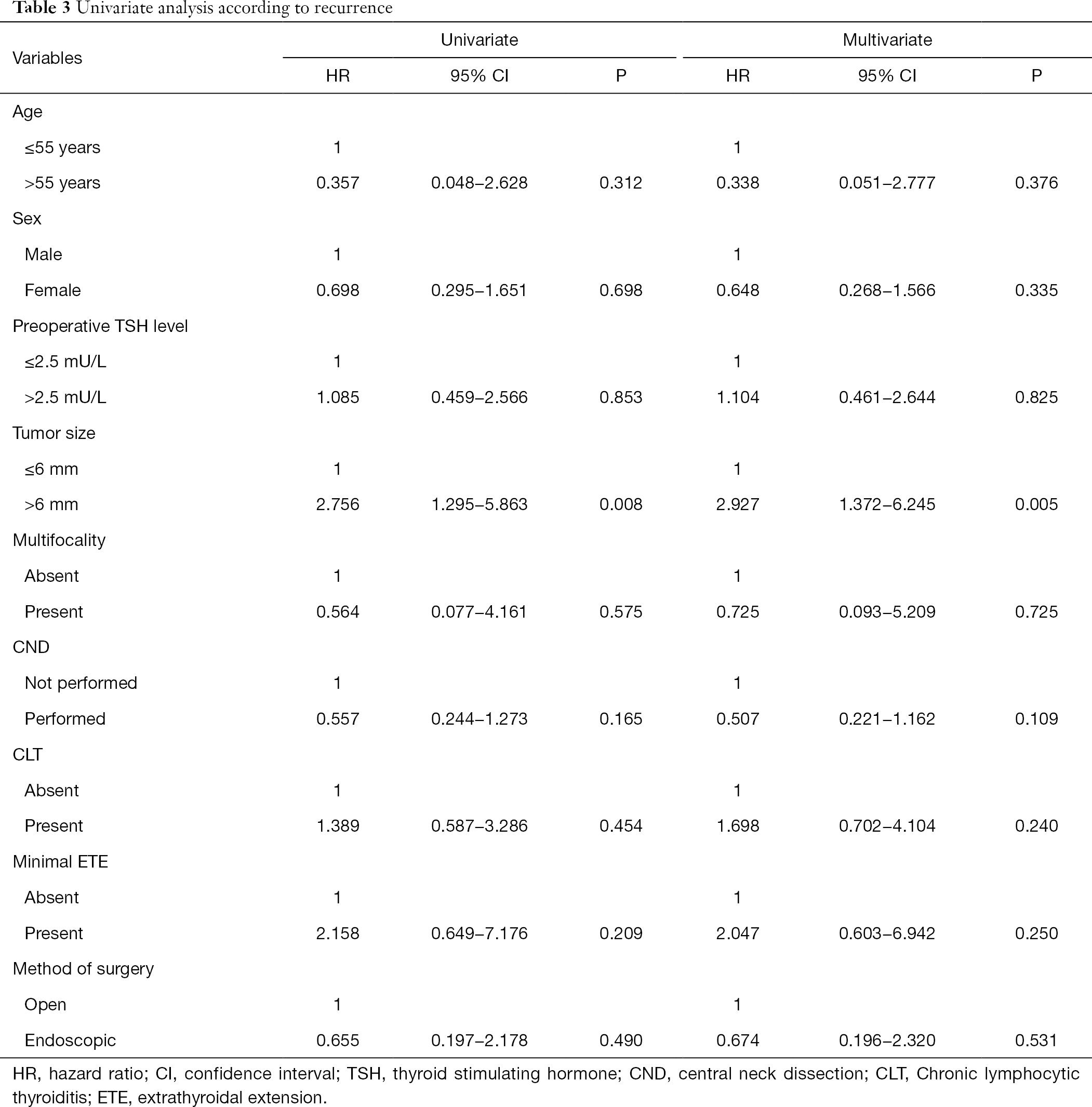 In the current study, 20.7% (95/458) of patients with PTMC who had undergone hemithyroidectomy plus prophylactic unilateral CND showed subclinical LN metastases. Although different recurrence rates were observed according to whether prophylactic unilateral CND had been performed, prophylactic unilateral CND was insufficient for patients with PTMC and clinically LN-negative disease. Surgery is essential for PTC management; however, according to American Thyroid Association (ATA) guidelines, active surveillance could be an option for patients with clinically LN-negative disease without local invasion and less aggressive PTMC (1). However, long-term follow-up after surgery is more cost-effective than long-term active surveillance (7). In addition, minimization of the surgical extent and performance of appropriate follow-up could be helpful for patients who may be stressed about undergoing active surveillance.

In a previous study, a preoperative TSH level >2.5 mU/L was found to be an independent predictor of central LN metastases in PTMC (19). In another study, patients with TSH levels >1.85 mU/L at 1 year after surgery had higher rates of recurrence (20). According to ATA guidelines, the TSH level should be maintained at 0.5 to 2.0 mU/L for patients who underwent lobectomy (1). In the current study, the TSH suppression strategy was not used in all patients. Levothyroxine was administered for maintenance of TSH levels within the normal range and for alleviation of hypothyroidism-related symptoms. Although the preoperative TSH level was not associated with RFS in the current study, further studies should evaluate the impact of TSH levels on recurrence in patients with PTMC who have undergone hemithyroidectomy.

This study has some limitations. The study was retrospective in nature, was performed at a single institution, and included relatively short-term follow-up periods in some patients. Although all patients had clinically LN-negative PTMC, prophylactic unilateral CND was performed at the surgeons’ discretion. Moreover, although US is usually used for the detection of structural recurrence, some patients had undergone CT. Furthermore, patients with unilateral multifocal PTMC generally underwent total thyroidectomy according to our institution’s policy. Therefore, selection bias may have occurred.

Conflicts of Interest: All authors have completed the ICMJE uniform disclosure form (available at http://dx.doi.org/10.21037/gs.2020.03.03). The authors have no conflicts of interest to declare.

Ethical Statement: The authors are accountable for all aspects of the work in ensuring that questions related to the accuracy or integrity of any part of the work are appropriately investigated and resolved. The study was approved by the institutional review board of Chonnam National University Hwasun Hospital (CNUHH-2019-130), and the need for informed consent from patients was waived.