Thymomas are rare oncologic diseases with an incidence of 0.15 case per 100,000 people and the most common tumors in anterior mediastinum (1). The optimization for the therapeutic strategies of thymomas is crucial. The extremely low incidence precludes the extensive understanding and treatment of thymomas. In this work, we focused on thymomas patients with type A to B3 based on WHO pathologic classification who received complete resection (CR).

Previously researchers found that age at diagnosis, Masaoka stage, WHO pathological grade, tumor size, resected marginal status, and postoperative radiotherapy (PORT) were prognostic factors for thymomas (2-6). Unfortunately, the usage of other parameters for survival is unclear, such as molecular signatures, adjuvant chemotherapeutic strategies, quality of perioperative nursing, and immunohistochemistry (IHC) markers. Recent years, molecular targeted-therapy and immunotherapy have applied to clinical work to treat solid malignancies such as lung cancer, which could prolong patients’ survival significantly. Unfortunately, neither chemotherapy nor targeted-therapy/immunotherapy could improve the outcome of thymoma patients especially for patients could not receive surgery (6-12). Therefore, searching for therapeutic targets is a crucial part of the further research work.

Biomarkers detected by IHC are often used as prognostics factors and guide for adjuvant treatment parameters in malignances. TP53 is a tumor suppressor gene and the most commonly mutated gene in human carcinomas (13). Mutant TP53 could be used as a prognostic marker of thymic carcinoma with aggressive behaviors (8). However, the correlation between TP53 expression in IHC and the survival of thymomas is unknown.

In this study, we investigated the clinical prognostic factors, and the contribute of TP53 status in IHC to the survival of thymomas.

In this retrospective analysis, we reviewed 113 consecutive thymomas (type A to B3) patients who were enrolled into Fudan University Affiliated Huadong Hospital from January 2001 to December 2016.

The inclusion criteria were: (I) patients were received complete surgical resection, (II) patients were diagnosed as thymomas with type A to B3 pathologically, (III) demography, characteristics, therapeutic regimens, follow-up information of patients were recorded. The exclusion criteria were: (I) patients had malignant oncologic history, (II) patients received palliative surgery, (III) patients received neoadjuvant therapies including radiotherapy and/or chemotherapy, (IV) patients did not abide by the prescriptions from surgeons postoperatively, such as adjuvant therapies or follow-up. The parameters were obtained from medical records including: age at diagnosis, gender, pathological grade, clinical stage (Masaoka stage), surgical approach (SA), adjuvant therapies, expression of biomarkers by IHC, recurrence was defined by cytologic or pathologic confirmation via biopsy or surgery, time from surgery to last contact, time from surgery to recurrence, and cause of death.

We performed the first CT follow-up 3 months after surgery, and then yearly CT follow-up at the outpatient clinic. In addition, the patients were followed up every 6 months by telephone. Follow-up information was updated until death or last contact (June 2018); median follow-up time was 54 (range, 0–195) months. All 98 patients finished the procedure of follow-up and all information was recorded. The study was approved by our institutional ethics committee, and all patients provided written informed consent for therapies and inclusion of personal data in our scientific database.

A total number of 98 patients met the inclusion and exclusion criteria. According to Masaoka stage, patients were divided into I, II, III and IV stage groups, which had 54, 17, 22 and 5 patients, respectively. The median age at diagnosis was 60 (range, 23–85) years, and male/female gender ratio was approximately 0.85. Myasthenia gravis (MG) occurred in 13 patients. Besides, 23 patients had diabetes mellitus (DM). Patients were divided into type A–B1 and B2–B3 based on WHO classification with 54 and 44 patients, respectively. Open surgery was performed in 53 patients and minimal invasive surgery was 45. During surgery, 14 patients had mediastinal lymph nodes dissection (LND).

Based on Chi-square test, with the advancement of clinical stage, the pathological grade was significantly upgrading, the proportion of open surgery and adjuvant therapies (P<0.001 for all) were increasing significantly (Table 1). The distribution of diagnostic age and proportion of gender had no significant difference in each clinical stage. The distribution of variables had no significant difference in P53 positive and negative groups (Table 2). 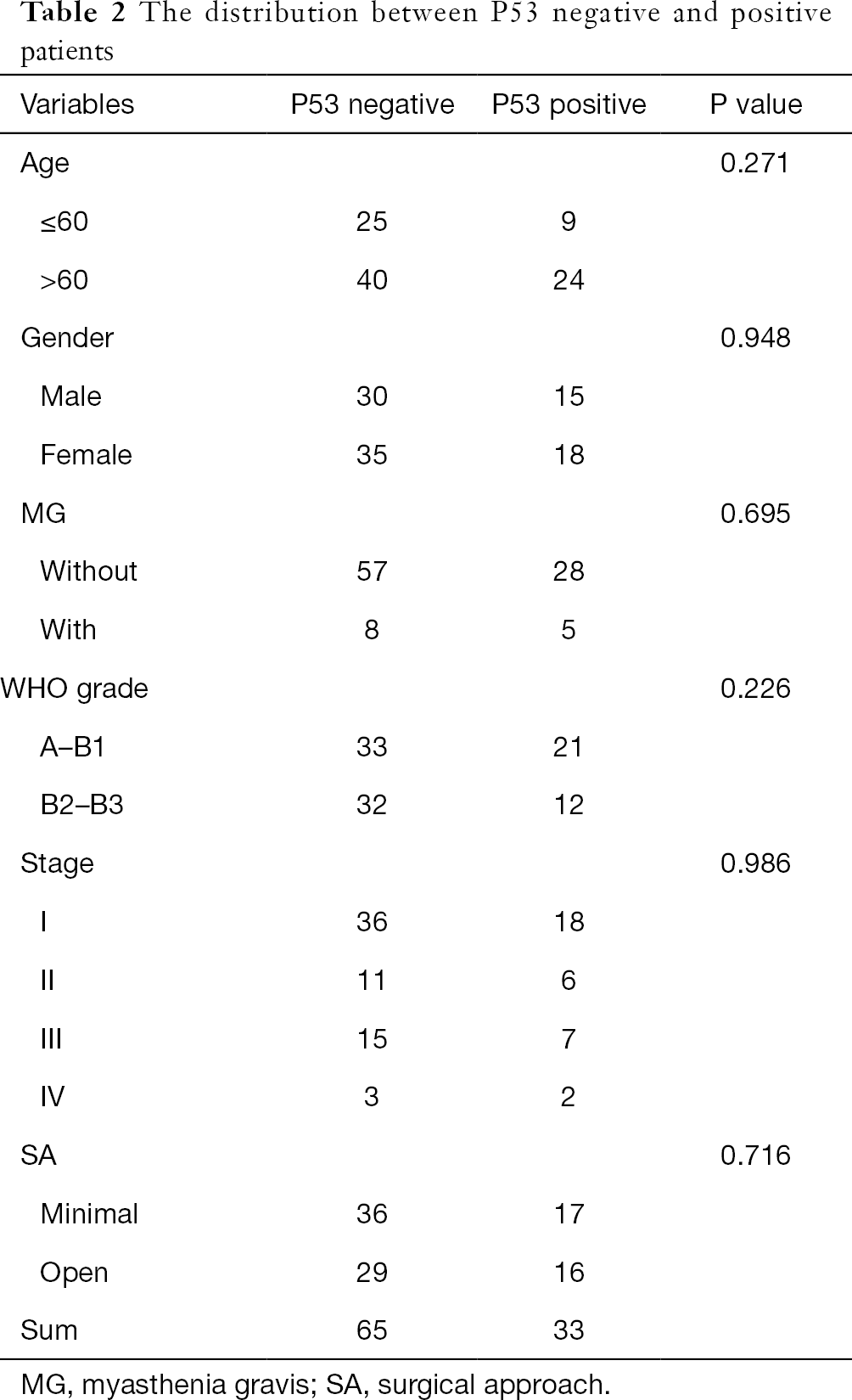 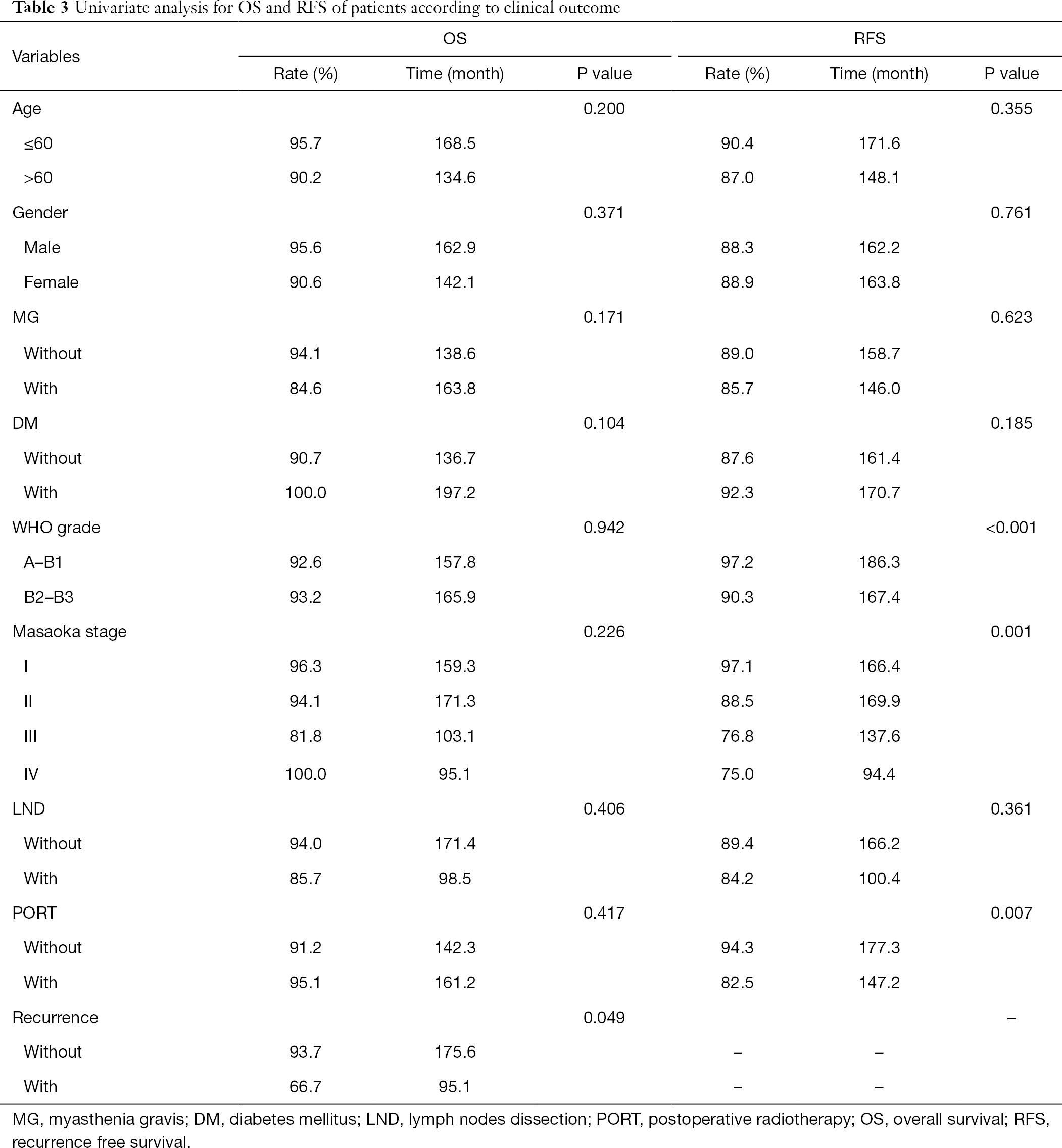 According to the clinical routine in IHC test of thymomas, all detective biomarkers including CD1, CD3, CD5, CD30, P63, TP53, TdT, and Ki-67, only the TP53 expression could predict OS. Distribution of patient characteristics between TP53 positive and negative expression groups had no significant difference. TP53 negative patients had significantly better OS (OS rate: 96.9% vs. 84.8%; OS time: 214.0 vs. 74.2 months, P=0.044) (Table 4). 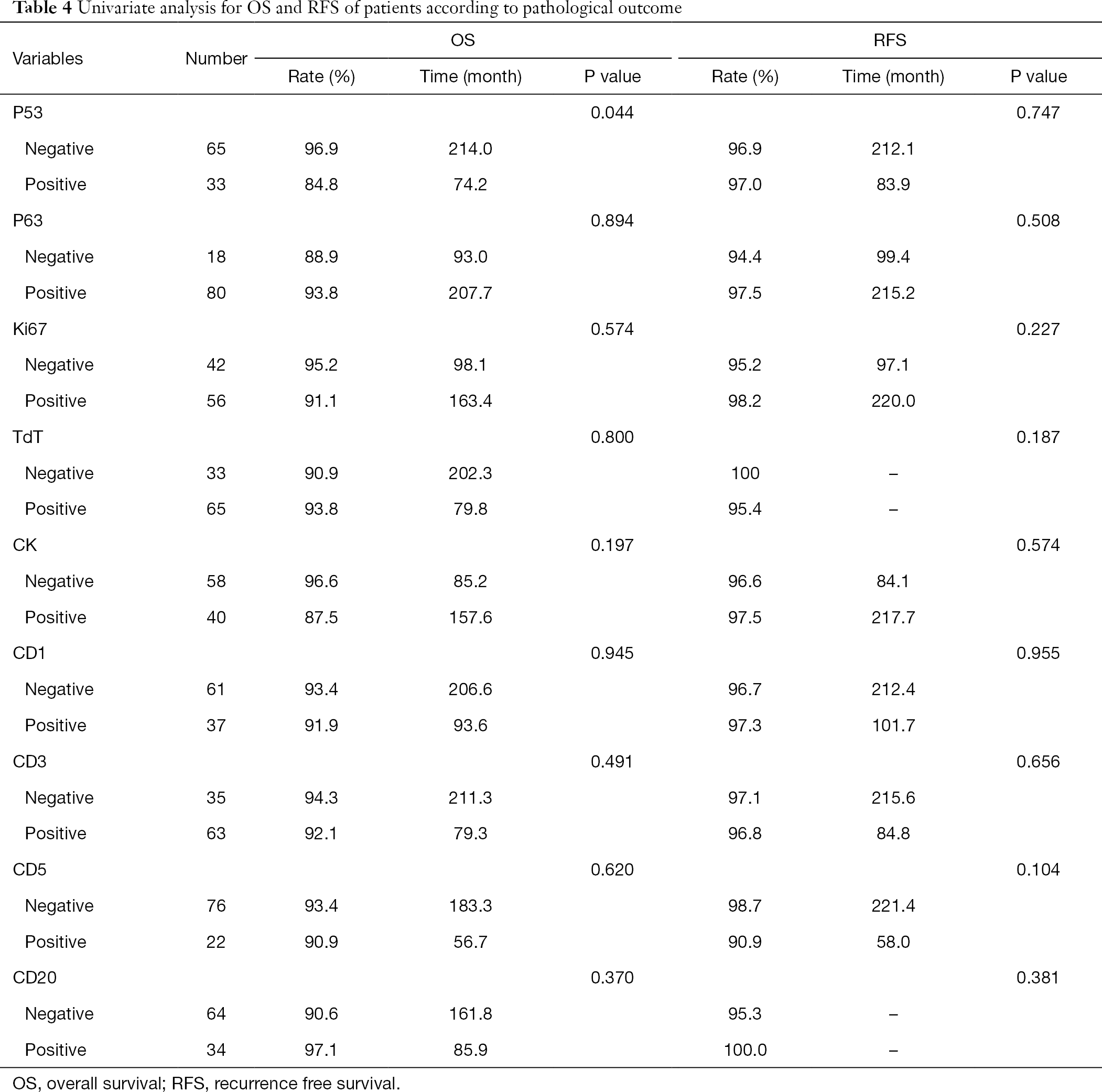 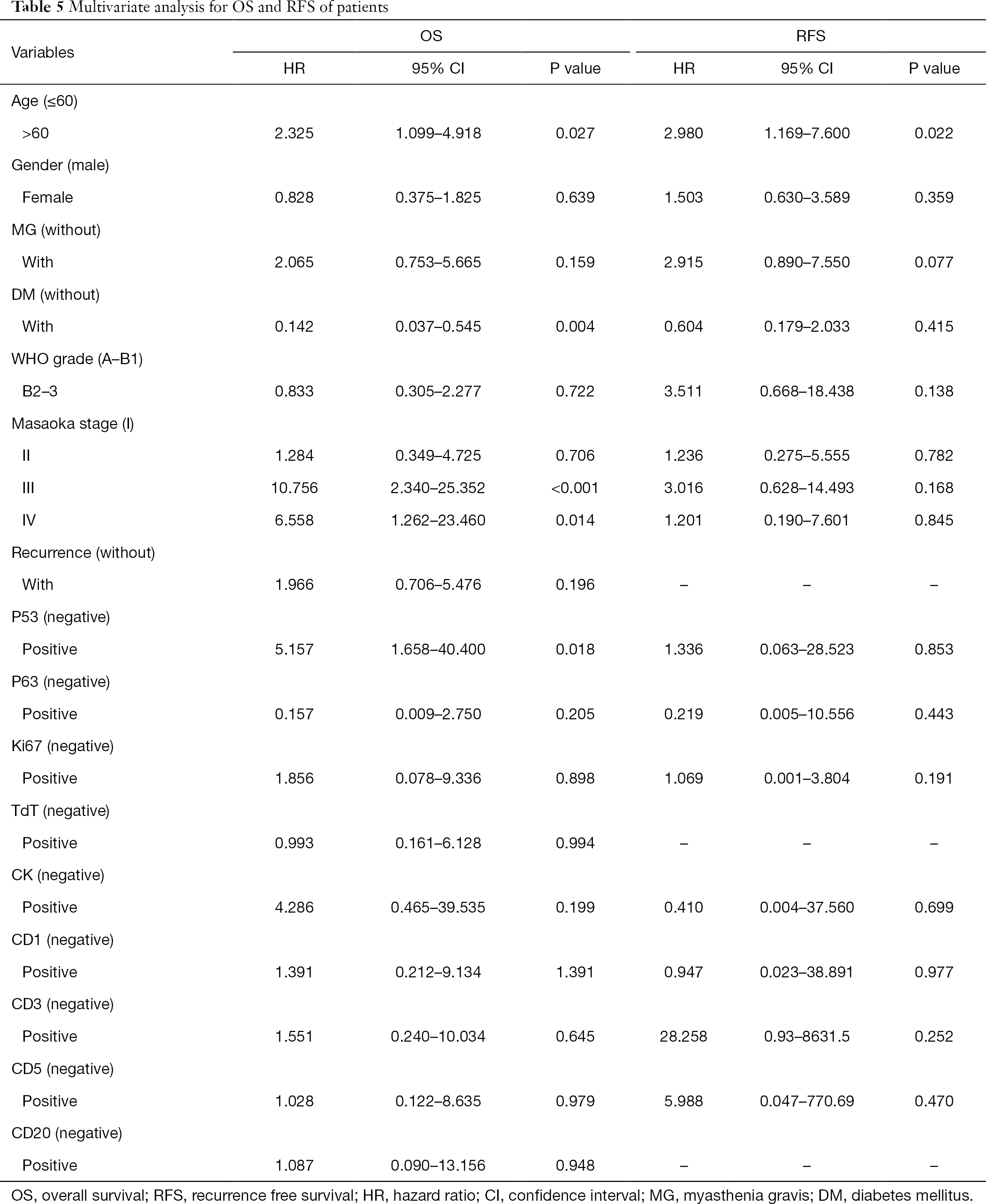 According to multivariate analysis, HR of DM (with vs. without: HR =0.142; 95% CI, 0.037–0.545, P=0.004) for OS indicated significant differences. DM were independent prognostic factor for OS. All information of DM patients was listed in Table S1. For thymomas patients with DM, our hospital adopts a continuation of endocrine treatment program for the management, and monitors blood glucose level 4 times per day perioperatively. For a small number of patients with postoperative stress-induced hyperglycemia, short-acting insulin injection was used. Blood glucose level was monitored to adjust insulin dosage. To strengthen perioperative nursing, especially monitoring blood glucose level, significantly reduces the risk of occurrence of immediate and long-term complications, influences OS and RFS (Table S1). 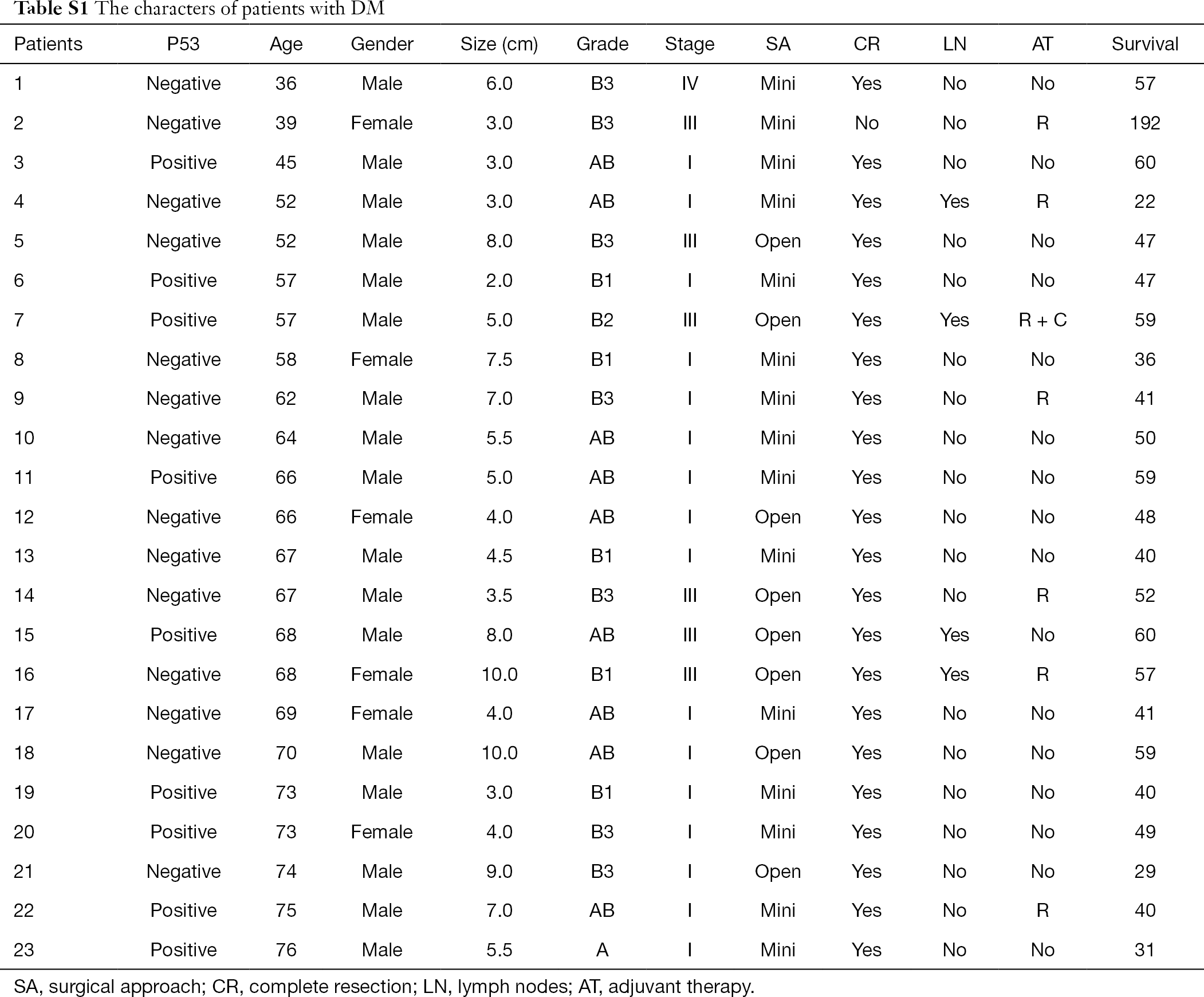 Table S1 The characters of patients with DM
Full table

Thymomas patients have scarce metastasis (9,14), so surgery is cornerstone for treatment (3,15,16). In the present study, the prognostic factors for surgical treated thymomas were analyzed. Besides, the contribution of biomarkers to survival in thymomas was also assessed.

The prognostic factors of surgical treated thymomas are identified. Elder age, advanced clinical stage, and without DM indicate significantly worse OS. Also, elder age is correlated with worse RFS. Age at diagnosis influences patient survival in multivariate analysis, but not in univariate analysis. With the growth of age, pathological grade and clinical stage advance significantly. This could be due to elders have longer developmental procedure of malignancies. Together, age at diagnosis, Masaoka stage, pathologic classifications and adjuvant therapies influence survival, which is consistent with a previous report that elder patients have relatively worse survival (17,18). It is worth noting that thoracic surgeons ignore the LND before, which influences the accuracy of TNM staging. For this reason, the utility value and credibility of TNM staging system are decreased. The prognostic value of TNM stage needs further investigation (19).

In previous studies, the role of chemotherapy for thymoma was accessed. The first-line chemotherapeutic regimen for thymomas is platinum (cisplatin or carboplatin) combined with gemcitabine, docetaxel or paclitaxel (24). However, previous studies showed that chemotherapy is not effective in thymomas (25). In this study, adjuvant chemotherapy was used in a small part of patients, and no significant difference of survival was found between with and without chemotherapy groups (the data was not shown). This suggests that specific targets have not been identified in thymomas.

PORT has different efficacy for thymomas at different clinical stages. Some researchers reported that CR is a sufficient treatment for earlier stage tumors, while PORT should be performed in thymomas at advanced stages or resected lesion with positive margins. However, some scholars have suggested that surgical treated patients do not need further treatment including PORT (6). Based on our previous work, PORT could significantly prolong the OS of Masaoka stage II–IV patients (5). Resected marginal status did not significantly affect patients’ survival, and surgical treatment is the optimal choice for thymomas, even thymomas invade surrounding tissues or metastasis has occurred.

Biomarkers are tested by IHC method in resected samples. TP53 expression decreases thymomas patients’ OS. TP53 could be used as a prognostic factor for thymomas. Thymomas with TP53 mutation have more aggressive behaviors, and worse prognosis (8). Normal TP53 protein has a short half-life that could not be detected by IHC test. While mutant TP53 could have long half-time which could be detected by IHC (8). Positive TP53 expression in IHC indicates TP53 mutation cause significantly worse OS.

One limitation of this study is that it is a retrospective analysis based on a single institute database. This may cause selection bias and limit the generalization of the findings. The other limitation is that sample size is relatively small. This causes the statistical error inevitably. However, the results concerning the rare disease are ensured reliable and credible according to the corrective, rigorous, and scientific statistical analysis in this study. Besides, since different surgeons have different attitudes concerning the importance of LND, the assessment of lymph nodes involvement should be treated scientifically. The credibility of TNM staging system needs to be improved in clinical and scientific researches in the future.

Elder patients, advanced Masaoka stage, without DM, and TP53 positive expression in IHC indicate significant worse OS in thymomas. While, elder age could shorten RFS of patients. Together, we found that age at diagnosis, clinic stages, DM, TP53 expression, and quality perioperative nursing are factors could predict prognosis in thymomas.

Conflicts of Interest: All authors have completed the ICMJE uniform disclosure form (available at http://dx.doi.org/10.21037/gs.2020.03.01). The authors have no conflicts of interest to declare.

Ethical Statement: The authors are accountable for all aspects of the work in ensuring that questions related to the accuracy or integrity of any part of the work are appropriately investigated and resolved. The study was approved by our institutional ethics committee. Written Informed consent was obtained from each participant included in the study.