In 2016, Thyroid cancer was the fourth most common cancer in Korea. Thyroid cancer is especially prevalent in women, being the second most common type of cancer and the most common type of cancer in young women aged 15–34 years, accounting for 50.5% of cancers in the latter population (1). Although conventional open thyroidectomy is the treatment of choice, the anatomic location of the thyroid inevitably results in a scar on the anterior neck, which may increase stress and reduce quality of life, especially in young women. Cosmetically unfavorable outcomes may be avoided by the use of various remote approaches in patients at low risk of recurrence. The three most common techniques are the trans-axillary approach (TAA), trans-oral approach, and the bilateral axillary-breast approach (BABA), the latter consisting of two axillary incisions, 0.8 cm in size, and two circumareolar incisions on the breast (2). Robotic BABA thyroidectomy, first introduced in Korea in 2008, provides surgical completeness, improves surgical and cosmetic outcomes, and reduces postoperative complication rates, compared with open thyroidectomy (3-7).

Safe dissection with bleeding control during robotic BABA thyroid surgery has been provided by Harmonic ACE® (Harmonic) Curved Shears. Because the Harmonic shears do not have an endowrist function in the Da-Vinci system, they only work in a straight-forward direction, making their proper placement more difficult during thyroidectomy. The recently introduced Vessel Sealer Extend® (VSE) provides bipolar-based sealing and cutting ability with endowrist function in the Da-Vinci Xi system and has a wider range of motion than the Harmonic shears. To date, however, no studies have assessed the safety of the VSE for robotic BABA thyroid surgery. The present study therefore compares pathologic results and clinical outcomes, including complications, in patients who underwent robotic BABA thyroid surgery using the VSE and Harmonic devices.

Medical data and surgical videos of patients who underwent robotic BABA thyroid surgery from December 2018 to March 2019 at our institution were reviewed. Indications for robotic BABA thyroid surgery included patients with lesions confirmed or suspected to be papillary thyroid carcinoma (PTC) or to be benign by preoperative fine needle aspiration, cancers <2 cm in diameter on ultrasonography, benign tumors <8 cm in diameter, tumors located in the thyroid, no clinical evidence of central or lateral neck node metastasis, and no history of neck surgery or radiation exposure.

All robotic BABA thyroid operations were performed by a single endocrine surgeon. First lobectomy time was defined as the time from the initiation of midline division by the robotic device to the completion of lobectomy from the thyroid bed. Perioperative clinical parameters included time from robot docking to completion of lobectomy, number of times the camera was cleaned during lobectomy, volume of blood lost, duration of hospital stay after surgery, visual analogue pain score (0 to 10) at 9:00 am on postoperative days 1 and 2, and surgical complications. Vocal cord function was confirmed by vocal cord ultrasound in the outpatient clinic (8). Hypoparathyroidism was defined as serum parathyroid hormone concentrations (iPTH) <5 pg/mL during postoperative period and <10 pg/mL after discharge. The study protocol was approved by the Institutional Review Board (IRB) of Inha University College of Medicine (approval number: 2019-03-007), which waived the requirement for written informed consent based on the retrospective nature of the study.

The VSE uses a refined jaw profile for precise dissection and a grasp with a textured surface to secure tissue, approaching the surgical field from a preferred angle by articulating the wrist. This device enables an optimized approach to sealing and cutting of vessels and tissues, without limiting instrumental direction. With the instrument in position, a longer electrode helps seal and cut vessels up to 7 mm in diameter or tissue bundles that fit within its jaws. When combined with the Da-Vinci surgical system, the VSE device enhances flexibility and efficiency because of the endo-wrist function, not present in conventional energy devices such as Harmonic. In this study, allocation of Harmonic or VSE was instantly assigned according to the VSE supply status.

As in open conventional thyroidectomy, the patient was placed in a supine position with the neck slightly extended. Robotic BABA thyroid surgery using the Da-Vince Xi system requires two 8 mm circumareolar and two 8 mm axillary incisions. A subcutaneous and subplatysmal flap was made by hydrodissection using 1:200,000 saline with epinephrine, followed by insufflation of CO2 gas at 7 mmHg pressure and 15 mL/min flow rate to maintain a working space. As in open conventional thyroidectomy, robotic BABA thyroidectomy consisted of six steps: (I) skin incision and flap elevation; (II) midline division, isthmectomy, and lateral dissection; (III) preservation of the recurrent laryngeal nerve and the parathyroid glands; (IV) dissection of Berry’s ligament and the upper thyroid pole; (V) central lymph node dissection; and (VI) closure of the midline and the skin incision. Surgical field photographs were taken at each step, with those taken using the two devices compared.

During the study period, 35 consecutive patients underwent robotic BABA thyroid surgery, 20 using the VSE and 15 using the Harmonic device; their baseline characteristics are compared in Table 1. Gender distribution, mean age and BMI, extent of surgery, and pathologic parameters did not differ significantly in the VSE and Harmonic groups. 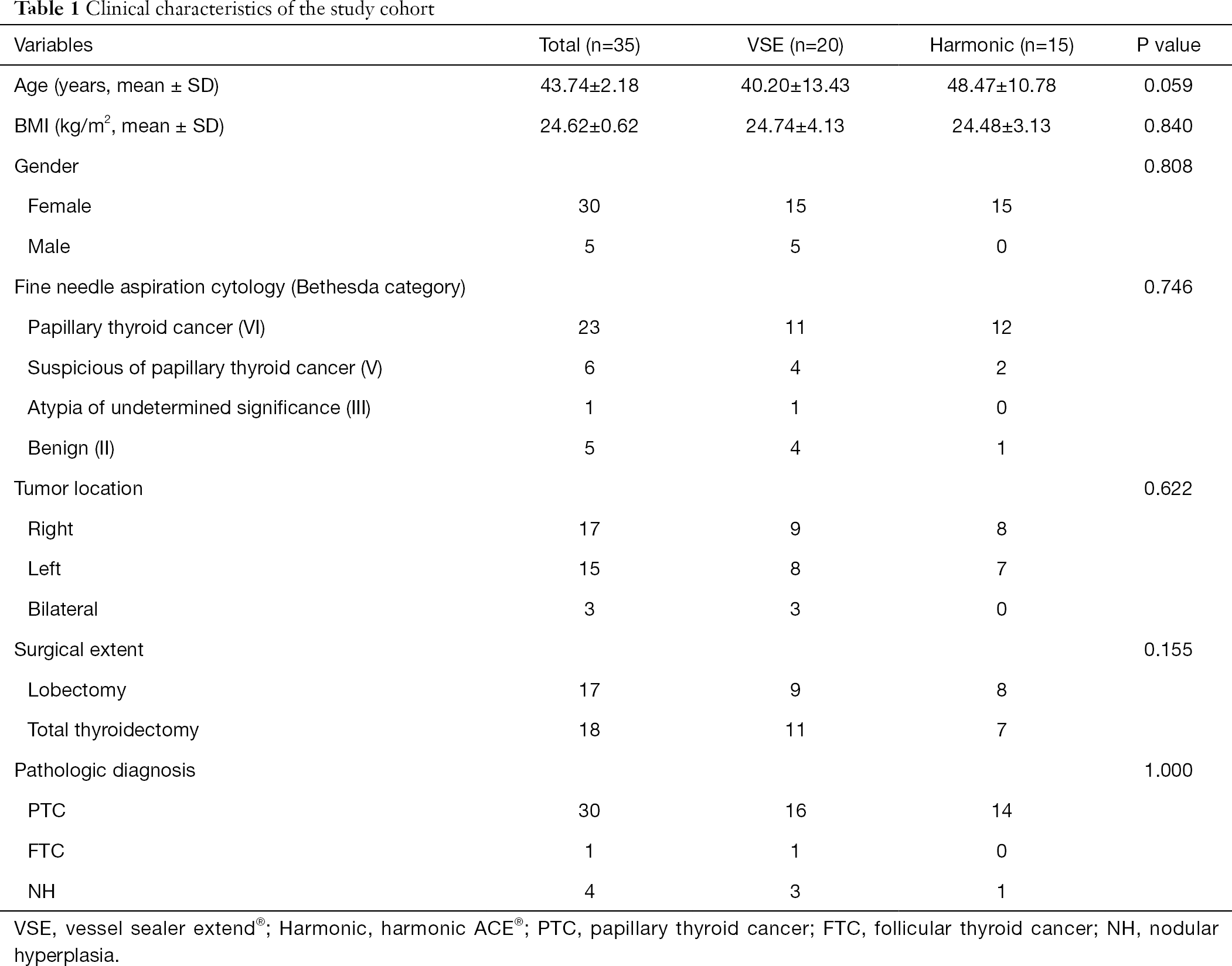 Thyroidectomy procedures in robotic BABA thyroid surgery are shown in Figure 2. During the lateral dissection procedure, the endowrist function could be used to move the joints of the VSE. Unlike the Harmonic, free movement of the joints with the VSE allowed extended movement of the instrument during the lateral dissection of the upper and lower parts, minimizing control of ​​the thyroid by mechanical force (Figure 2A,B). Moreover, the VSE could dissect the tissues surrounding the recurrent laryngeal nerve, while keeping the instrument parallel to the nerve. Similar results were observed during dissection using the Harmonic, but it was necessary to control thyroid tissue using prograsp forceps (Figure 2C,D). In addition, articulating movements during upper pole dissection resulted in safe dissection of the nerve from the surrounding soft tissues, creating an additional angle that could not be created with the Harmonic device. Endowrist movements allow an approach to dissected structures at a more ideal angle. In particular, narrowing of the upper part of the cricoid cartilage can allow surgery to be performed freely and safely, while ensuring vision as in open surgery due to the endowrist angle (Figure 2E,F). Furthermore, the Harmonic device has difficulties dissecting lymph nodes during central compartment dissection, because it does not bend downward; by contrast, the VSE can bend downward, making it safer and easier to dissect central compartment lymph nodes (Figure 2G,J). 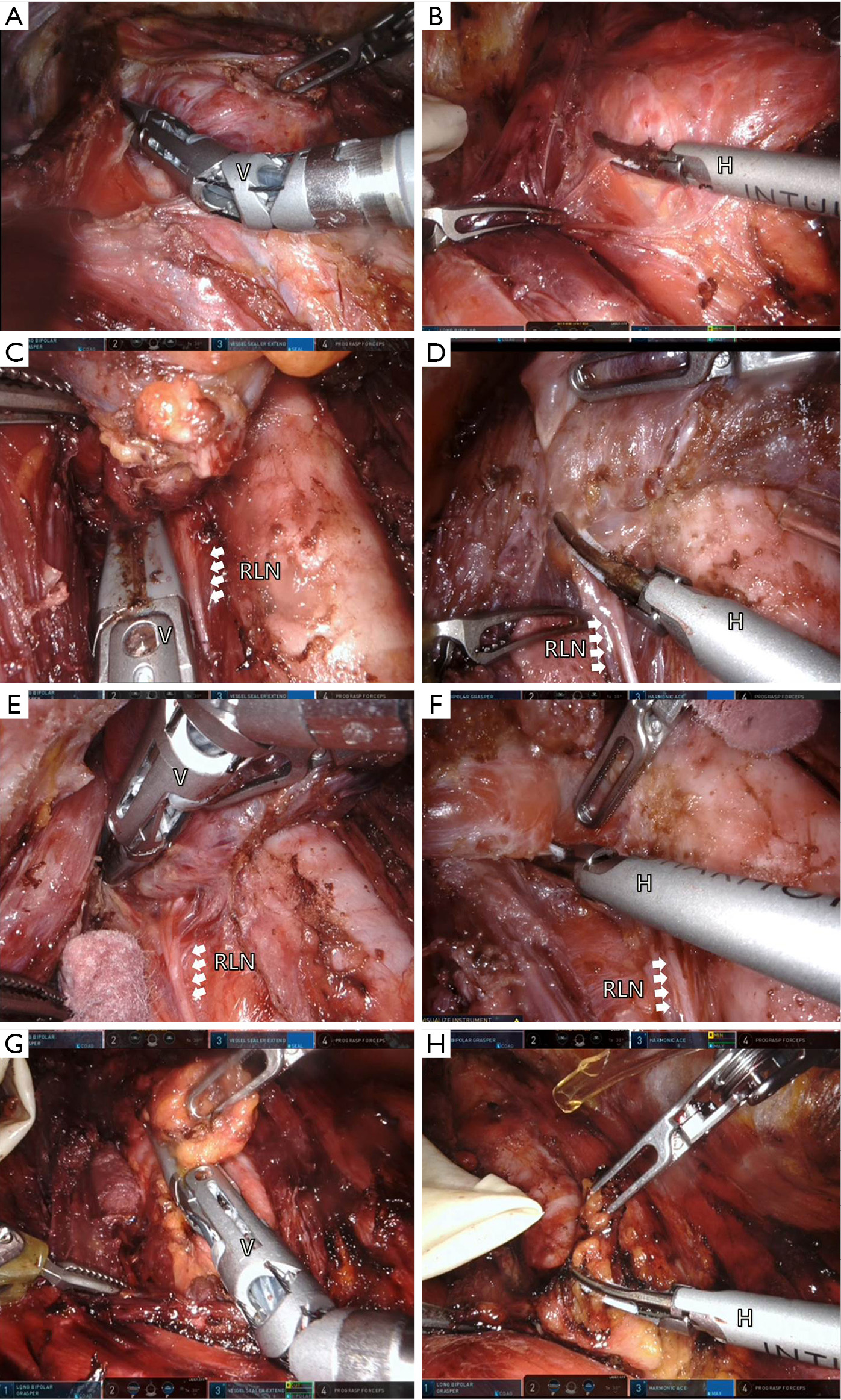 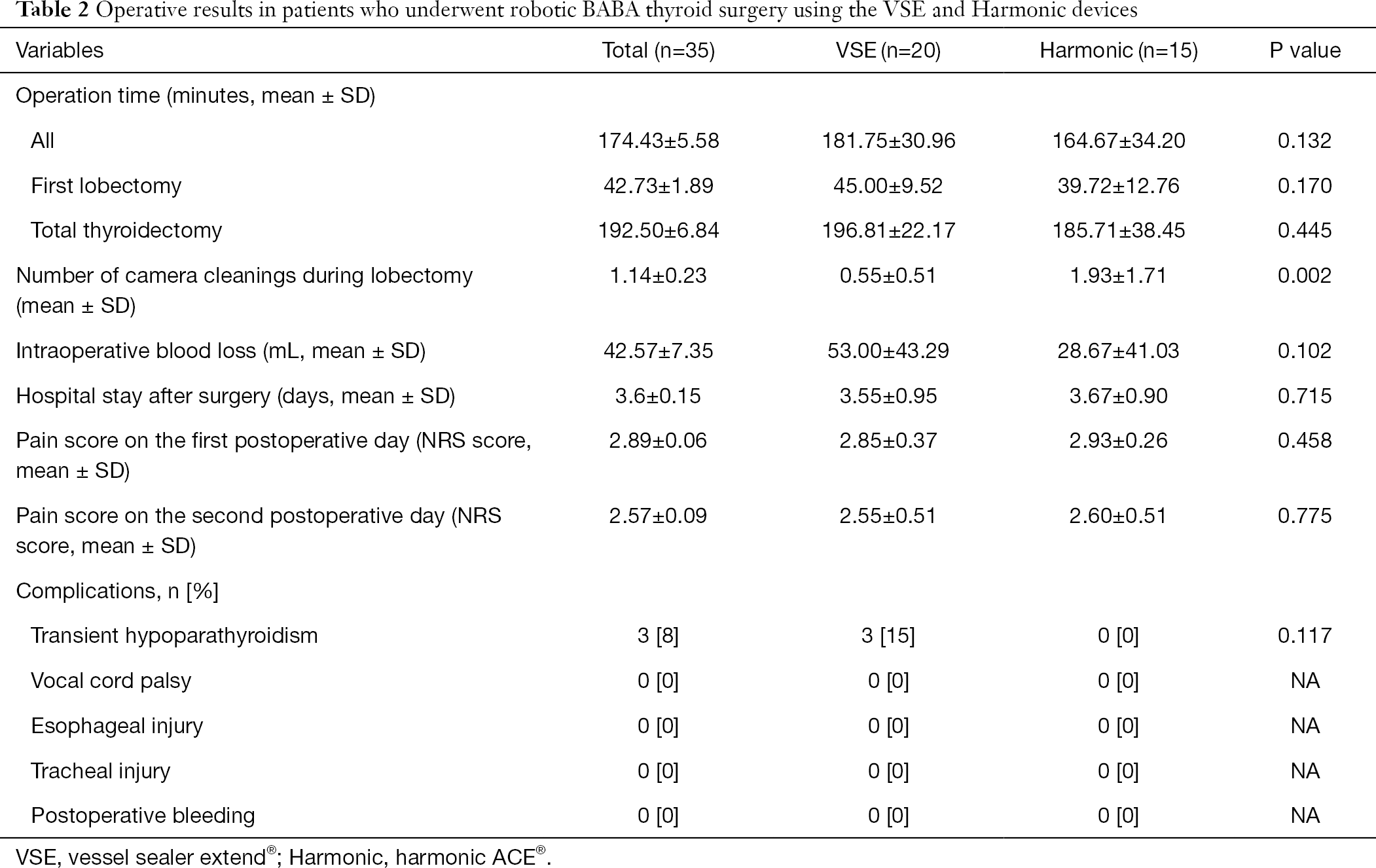 Many clinical studies have assessed surgical outcomes and safety of robotic BABA thyroid surgery, finding that this method is a safe and effective remote-access thyroidectomy technique (9-22). All previous studies used the Harmonic device. This device, however, has several drawbacks, as it only permits straight-forward movement, whereas other robotic devices provide human joints with endowrist function. The Harmonic device is not parallel to the trachea during isthmectomy, which may result in tracheal injury by a Harmonic tip. Although not present in our operative results, this complication rate is reported from 0.5% to 3.3%. Previous report described that tracheal injury, attributed from the thermal effects of harmonic scalpel which needed endoscopic primary repair (23). Additional four tracheal injuries by the Harmonic were also reported in two more articles (24,25). The straight and direct entrance of the Harmonic device can result in cutting of some of the muscles during lateral side dissection. Furthermore, when dissecting tissues surrounding the recurrent laryngeal nerve, the Harmonic is rarely parallel to the nerve direction. Furthermore, the temperature of the Harmonic shaft is very high, up to 200 °C, indicating a need to use a gauze ball or other device to protect the nerve during dissection around it. The superior thyroidal vessel is difficult to dissect under direct vision using the Harmonic device, because this device must be inserted into a narrow space between the cricoid cartilage and the utmost strap muscle. It is also difficult to dissect the central node using the Harmonic because it is not bent in a downward direction. All of these limitations can only be overcome by an experienced surgeon with knowledge to orient anatomical structures in the direction of harmonic movement. In addition, the Harmonic uses ultrasonic waves, which splashes water onto the camera, dirtying its lens. Thus, the view through the camera may deteriorate during surgery, requiring frequent cleaning.

The VSE was initially developed to provide a pivoting motion to the energy device. However, the tip of the bipolar energy part is larger than that of the Harmonic. An upgraded version of this sealer uses a jaw 30% lower in size than that of the initial version. This device has several advantages: first, it includes wrist movements that bend its joints, making it easier to access hard-to-reach areas of existing tools. The VSE is parallel to the trachea, reducing its likelihood of being damaged by the tip. The movement of instruments is limited during several steps of robotic BABA thyroid surgery by, for example, tissues surrounding the recurrent laryngeal nerve or the upper pole of the thyroid, restricting access by the straight Harmonic device. Second, because robotic BABA thyroid surgery must be performed in a limited space, instruments, especially the second and fourth arms (numbered according to the Xi system), may collide. The joint bending ability of the VSE can reduce these collisions. Third, thermal damage may occur while dissecting around the nerve using an energy device. However, both blades of the VSE are fully insulated and can be utilized safely around the nerve. Fourth, the VSE device can induce spot coagulation, resulting in more precise bleeding control. In addition, because this device uses bipolar energy, water splashing is less likely to occur, reducing the number of camera cleansings.

The VSE, however, has several drawbacks. First, this new instrument is larger in size than the Harmonic device. Because robotic BABA thyroid surgery is performed in a narrower space than abdominal surgery, a larger sized instrument may be an obstacle in a narrow operation field, making fine dissection with this device more difficult than with the Harmonic. Second, because energy is not fully transferred to the tip of the jaw, it cannot dissect the tip area like a Harmonic device. Third, the VSE device requires more time to ligate and cut tissues than the Harmonic device. In addition, time is required to coagulate the blood vessels electrically, and an additional step is required to cut the ligated blood vessel by stepping on the footplate.

This study had several limitations. First, because this was a retrospective study, patients were not randomized to the VSE or Harmonic device. Although baseline characteristics were well matched in the two groups, the results may have been affected by selection bias. Second, the number of patients was not sufficient for adequate comparison. Large-scale prospective randomized controlled studies are needed to show that the VSE device is safe for robotic BABA thyroid surgery.

In conclusion, this is the first report to show that the VSE device is safe for robotic BABA thyroid surgery. Despite several drawbacks, this device has distinct advantages over existing energy devices. Further studies are needed to investigate the advantages and disadvantages of this new energy device.

Ethical Statement: The authors are accountable for all aspects of the work in ensuring that questions related to the accuracy or integrity of any part of the work are appropriately investigated and resolved. The Institutional Review Board of Inha University College of Medicine (approval number: 2019-03-007) and waived the requirement for informed consent.