The number of breast cancer cases exceeded 231,000 in 2015 alone (1). Approximately 30% of breast cancer survivors have lymphedema, which is a severe and disabling sequela secondary to breast cancer. Lymphedema affects 140 to 200 million people worldwide and can manifest as severe arm edema, skin ulceration, pain, dysfunction, lipodermatosclerosis, and occasionally lymphangiosarcoma (2,3). According to the International Society of Lymphology (ISL), lymphedema receives a classification of I to V, in ascending order of severity (4). The development of lymphedema is associated with number of lymph node resections, seroma, obesity, radiotherapy, and wound infection (5,6). Lymphedema is found in approximately 6% to 49% of patients who undergo axillary lymph node dissection and 2% to 7% of patients who undergo sentinel lymph node biopsy (3,7).

Two reviewers (Gabriela Cinotto, Daniel Boczar) performed independent searches using the PubMed database without timeframe limitations, initially through title and abstract descriptions and then by full-text review. Disagreements regarding article identification and final selection for inclusion of the literature were resolved by another reviewer (Antonio J. Forte). The search was done using the following keywords: “breast cancer lymphedema” AND “lymph node transfer” OR “lymph node graft” OR “lymph node flap”. The bibliographic reference list of the studies that fulfilled the study eligibility criteria were also examined in order to include articles not present in our initial search. This study followed the guidelines outlined in the Preferred Reporting Items for Systematic reviews and Meta-Analyses (PRISMA flowchart).

Our search yielded 93 potential studies in the literature, but only 6 studies fulfilled eligibility criteria (Figure 1, Table 1) (8-13). All included studies were published between March 2012 and May 2019. The autologous breast reconstruction combined with VLNT was described by authors from different countries: 3 studies were from Europe, 1 study from China, 1 from Brazil, and 1 from the United States. Four studies evaluated the outcomes in patients treated with DIEP or ms-TRAM combined with VLNT, with exception of 2 studies which analyzed 2 cohorts of patients, 1 of which underwent isolated VLNT without breast reconstruction (8,13). These patients were excluded from our systematic review. The total number of patients was 103. The patients’ ages ranged from 31 to 70 years old and the follow-up period ranged from 3 to 64 months. The population included patients with initial lymphedema symptoms, for which the duration varied from 6 to 182 months before the surgical treatment. 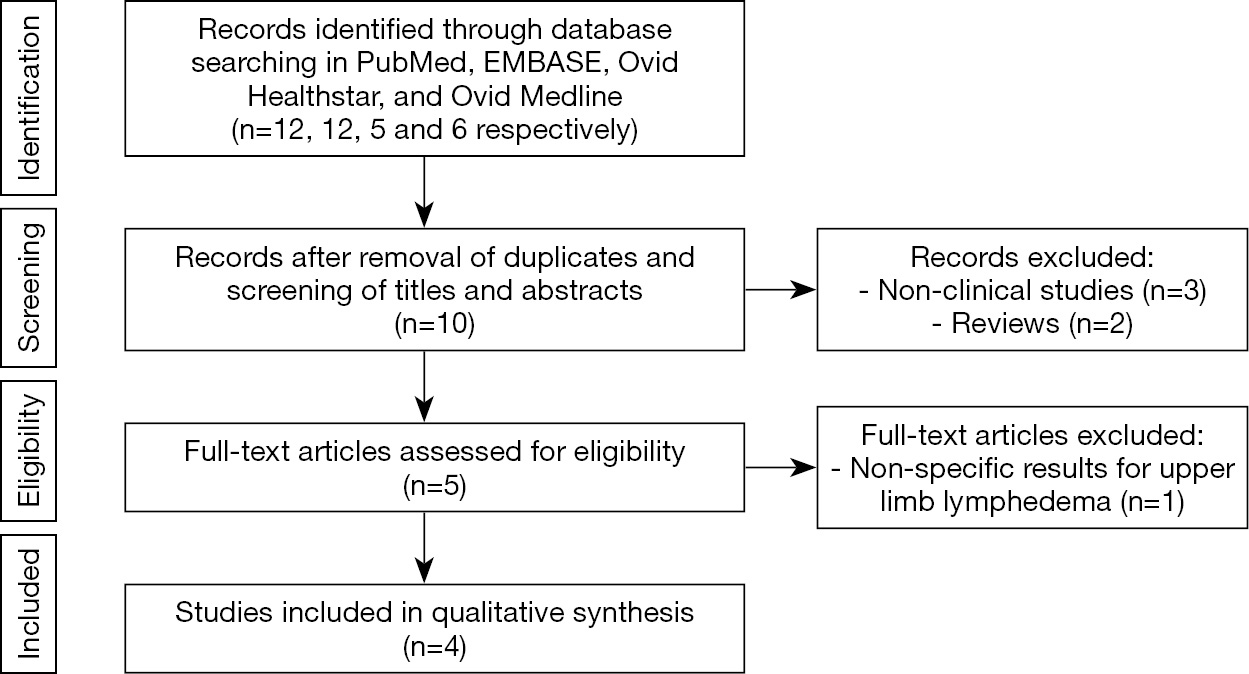 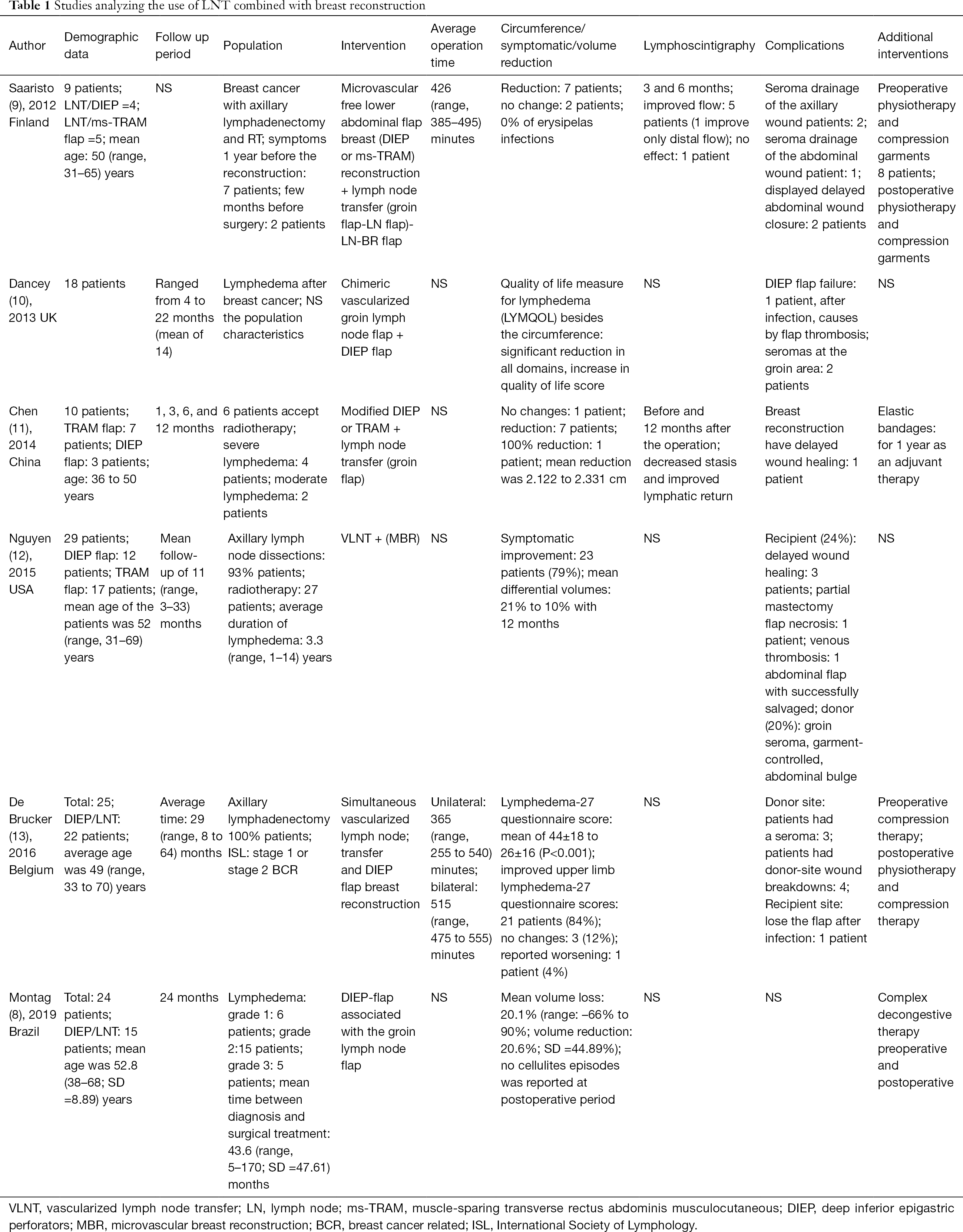 All 6 studies described groin VLNT as treatment for lymphedema. Two different breast reconstructions were described: DIEP and ms-TRAM. Patients who underwent DIEP were reported in all of the studies, while ms-TRAM patients were reported by only 3 authors. Two authors reported the average time of the procedure (range, 255 to 555 minutes) (9,13). In most of the studies, all patients reported a reduction of arm circumference, volume, and symptoms of the upper extremity with the lymphedema comparing the preoperative to the postoperative period. Nonetheless, in 3 studies, 6 patients did not notice any arm circumference reduction during the follow-up period (9,11,13). De Brucker et al. reported a single patient with worsening symptoms during the follow-up period (13). Complications were reported by different authors, with major complications being venous thrombosis of abdominal flap, partial flap necrosis, and complete flap failure in 2 patients who presented with flap infection (10,13). Studies also reported minor complications such as seroma and delayed abdominal wound closure at the donor site. Lymphoscintigraphy was described as a diagnostic method used during the follow-up period to evaluate the patients by Saaristo et al. (9) and Chen et al. (11).

This systematic review found that lymphedema improved significantly after VLNT combined with DIEP or ms-TRAM. Although breast reconstruction combined with VLNT it is a promising treatment but requires more extensive studies to validate its utility. The analyzed studies recommended this reconstructive method for all mastectomy patients with lymphedema and for patients who will undergo late breast reconstruction following radiotherapy (12). These procedures can also be performed as a preventive method for lymphedema, considering that the symptoms may occur years after mastectomy. Furthermore, performing both procedures at once allows each patient to avoid undergoing more than one procedure. According to Siotos et al., patients affected with breast-cancer related lymphedema were more likely to experience improvement after autologous breast reconstruction, regardless of whether VLNT was performed simultaneously. That being said, if VLNT was included in the procedure, it was noted a 4-fold increase in the chance of patients reporting a positive outcome (14).

Although the exact mechanism of lymphedema improvement after simultaneous breast reconstruction is still unclear, some theories have been suggested. It is believed that lymphatic vessels release growth factors after the VLNT, inducing regrowth of the lymphatic network. Moreover, there is a suction mechanism combined with an internal pump which is driven by hydrostatic force that arises in the flap after arterial anastomosis into the recipient’s wound site, and the suction occurs by the low-pressure of the venous drainage at the recipient vein (10,13,15,16).

Our findings indicated that after 2015, several authors have elected to conduct anastomosis with the mammary vessels rather than thoracodorsal vessels, because of factors such as the pedicle orientation, central placement, shape of the vessel, and the possibility to perform a latissimus dorsi flap in case of free flap failure. One important issue to consider when performing LNT is that the careful isolation of the groin lymph nodes should be done. The number of lymph nodes found in the groin area is quantitatively large, and selective lymph node removal from the lower abdomen reduces the risk of developing lymphedema in the lower limbs secondary to VLNT. The preferred practice involves sites that present more substantial numbers of lymph nodes and with multiple drainage sources, or when the lymph nodes that will be removed do not represent a major drainage function of the donor region.

The included articles described different surgical techniques for DIEP or ms-TRAM combined with VLNT. Saaristo et al. (9) described a modified DIEP or ms-TRAM flap containing the lymphatic tissue with the pedicle from a contralateral inguinal area (the defect) and the lymphatic tissue accompanying the lymphatic vessels, lymph nodes, adipose tissue from the groin (surrounding the superficial circumflex iliac artery or its perforators), and dual vascular pedicles including inferior epigastric artery/vein and the superficial circumflex iliac artery/vein. Dancey et al. (10) described a chimeric technique, which is similar to the Saaristo et al. (9), in which both authors described an end-to-end anastomosis to the deep inferior epigastric vessels to the thoracodorsal vessels. However, they preserved the superficial inferior epigastric vessels rather than the superficial circumflex iliac vessels, which to maintain the vascularization of the lymph nodes. Chen et al. (11) implemented ipsilateral or contralateral lymphatic tissue flap from the DIEP or ms-TRAM, depending on the lymph nodes’ location to the inferior epigastric vessel. If the lymph node was ipsilateral to the DIEP or ms-TRAM flap, it was preferred to take 1 pedicle. On the contrary, is when the lymphatic tissue is contralateral, a bilateral vascular pedicle to warrant the flap nutrition was preferred. The anastomosis occurring at the recipient site utilizes the thoracodorsal vessels, which did not undergo anastomoses of the superficial circumflex iliac vessels because the perfusion of the DIEP or ms-TRAM observed during the procedure was sufficient.

Nguyen et al. (12) described a different technique for LNT and DIEP. In a bilateral reconstruction, each DIEP flap and VLNT should be anastomosed to its respective thoracodorsal vessel. On the other hand, for a unilateral reconstruction without flap violation of the midline, the ipsilateral DIEP flap (to the breast defect) and contralateral lymph node flap is recommended. To anastomose the abdominal flap pedicle to the internal mammary vessels a 180° rotation will need to be performed. To prevent venous congestion after implantation of the DIEP flap, Nguyen et al. state that a venous anastomosis of the lymph node flap at the axial should be performed along with an arterial anastomosis, if possible. If an ipsilateral DIEP (from the breast defect) and contralateral VLNT is not feasible, for instance, a C-section or any surgery that affected the midline vascularization of the abdomen, an ipsilateral LNT flap and a contralateral DIEP flap to the mastectomy. In this case, the DIEP flap should be rotated an extra 90° using the internal mammary vessels for the DIEP flap, requiring a longer pedicle for the rotation and making this flap design harder to execute. The lymph node flap can be anastomosed to recipient vessels, similar to the procedure described previously for the contralateral vascularized LNT.

De Brucker et al. (13) performed an anastomosis of the DIEP flap with the mammary vessels and the VLNT flap with the branch of the thoracodorsal vessels or with the thoracodorsal vessels itself. Montag et al. (8), compared to De Brucker et al. (13), suggested a second venous anastomosis at the axial to improve the flap’s venous drainage. Montag et al. performed the VLNT flap at the same side of the DIEP flap and the recipient vessels were the internal thoracic artery and vein. Usually, the VLNT is perfused via the abdominal flap pedicle since they are on the same side, and an arterial anastomosis for the lymph node flap is unnecessary (12).

Our systematic review reports all the English-language manuscripts found to date in PubMed that evaluated autologous breast reconstruction combined with LNT procedures. We recognize the limitations to our study. The number of patients evaluated was small after applying the inclusion and exclusion criteria and the lack of prospective, randomized studies and the non-standardization of the obtained results make it difficult to create protocols. Also, we could not quantitatively evaluate the circumference or volume reduction, as well as cellulitis rate reduction, since several authors did not quantify it in detail.

Despite these limitations, we believe that autologous breast reconstruction combined with VLNT is a promising technique which portrayed good results. We also suggest future retrospective and prospective studies in order to enrich the evidence to support this practice.

In summary, patients experienced successful breast reconstruction, and the majority demonstrated subjective improvements in their lymphedema after reconstruction. The authors presented good results with reduction of the circumferential size of the affected upper limb, in addition to reduction of the infectious intercurrences such as cellulitis.

Funding: This study was supported by the Plastic Surgery Foundation, the Mayo Clinic Center of Individualized Medicine and Mayo Clinic Robert D. and Patricia E. Kern Center for the Science of Health Care Delivery.