Papillary thyroid carcinoma (PTC) is the most common type of endocrine malignant tumor, and epidemiological studies indicate that its incidence has increased significantly in recent years (1). PTC is expected to be the third-most common female malignant tumor in 2019 (2). Previous studies have reported that 20% to 90% of PTC patients had cervical lymph node metastases at the time of diagnosis (3,4). Other studies reported that lateral lymph node metastases (LLNM) occurred in 17.3% to 60% of all cases (5,6), and metastasis in this region was associated with an increased rate of recurrence (7) and poor outcome (8,9).

Ultrasonography (US) and US-guided fine needle aspiration biopsy (FNAB) are the main methods used to evaluate lymph node status. However, the diagnostic sensitivity of US for detection of LLNM is only 27.4% to 84% (10,11), and the false negative rate is as high as 44.6% (12). Lymph node status can also be assessed by frozen section examination (FSE) of the tissue, and this method has a sensitivity of 80.7% and a specificity of 100% (13).

Lymph node metastasis (LNM) of PTC typically occurs first in the central compartment (level-VI), before spreading to the ipsilateral and lateral compartments. Central lymph node metastasis (CLNM) is usually a strong predictor of LLNM (14). Moreover, a meta-analysis showed there was a 7.64-fold increased risk of LLNM when CLNM was present (15). However, the association between positivity of subregions of the central lymph nodes (CLNs) and lateral lymph nodes (LLNs) is still uncertain. Thus, it is necessary to identify risk factors for CLNM to reduce unnecessary lymph node dissection and to perform a more precise operation, especially when CLNs are involved.

The purpose of this study is to establish two web-based nomograms that consider subregions of CLN status to predict the preoperative risk of LLNM in patients with PTC.

The study was approved by the local institutional ethics committee. The records of 1,089 consecutive patients with PTC who underwent surgery between January 2016 and December 2017 at the Department of Endocrine and Breast Surgery of the First Affiliated Hospital of Chongqing Medical University were retrospectively reviewed. Patients were excluded if they had a history of head or neck irradiation, other types of thyroid malignancies, or a previous thyroid operation. Based on these criteria, 653 patients with PTC were included.

Physical examination, ultrasonography, and fine-needle aspiration biopsy (FNAB) were routinely performed on each patient before surgery. All 653 patients underwent total thyroidectomy with prophylactic or therapeutic ipsilateral CLN and LLN dissection. Frozen biopsies of the CLNs with subregions (including prelaryngeal, pretracheal, and ipsilateral paratracheal lymph nodes) were routinely performed. Because the posterior lymph node of the recurrent laryngeal nerve is only on the right side, it was classified with the paratracheal lymph nodes. The LLNs were removed by formal modified radical neck dissection, including level-II (IIa and IIb), -III, and -IV. All harvested lymph nodes were examined pathologically according to the different regions, and were diagnosed by three pathologists.

Patients were randomly divided to a “derivation group” and “validation group”. A t-test, chi-square test, or Fisher’s exact test was used to compare the baseline characteristics of these two groups, and the differences between patients with or without level-II or level-III/IV metastases in the derivation group.

All variables with significant differences in univariate analysis were entered into a multivariate logistic regression analysis. Odds ratios (ORs), adjusted odds ratios (aORs), and 95% confidence intervals (CIs) were calculated to determine the significance of all potential predictors. Two different models were independently used to compare the predictive ability of CLN for level-II and level-III/IV LLNM.

Receiver operating characteristic (ROC) curves were used to determine the discriminability of the models. Decision curve analysis (DCA) was used to calibrate and evaluate the models for the validation group, which allowed comparison of predicted probabilities with actual probabilities. Two web-based nomograms were designed using the better model (based on above analyses) for prediction of LLNM. 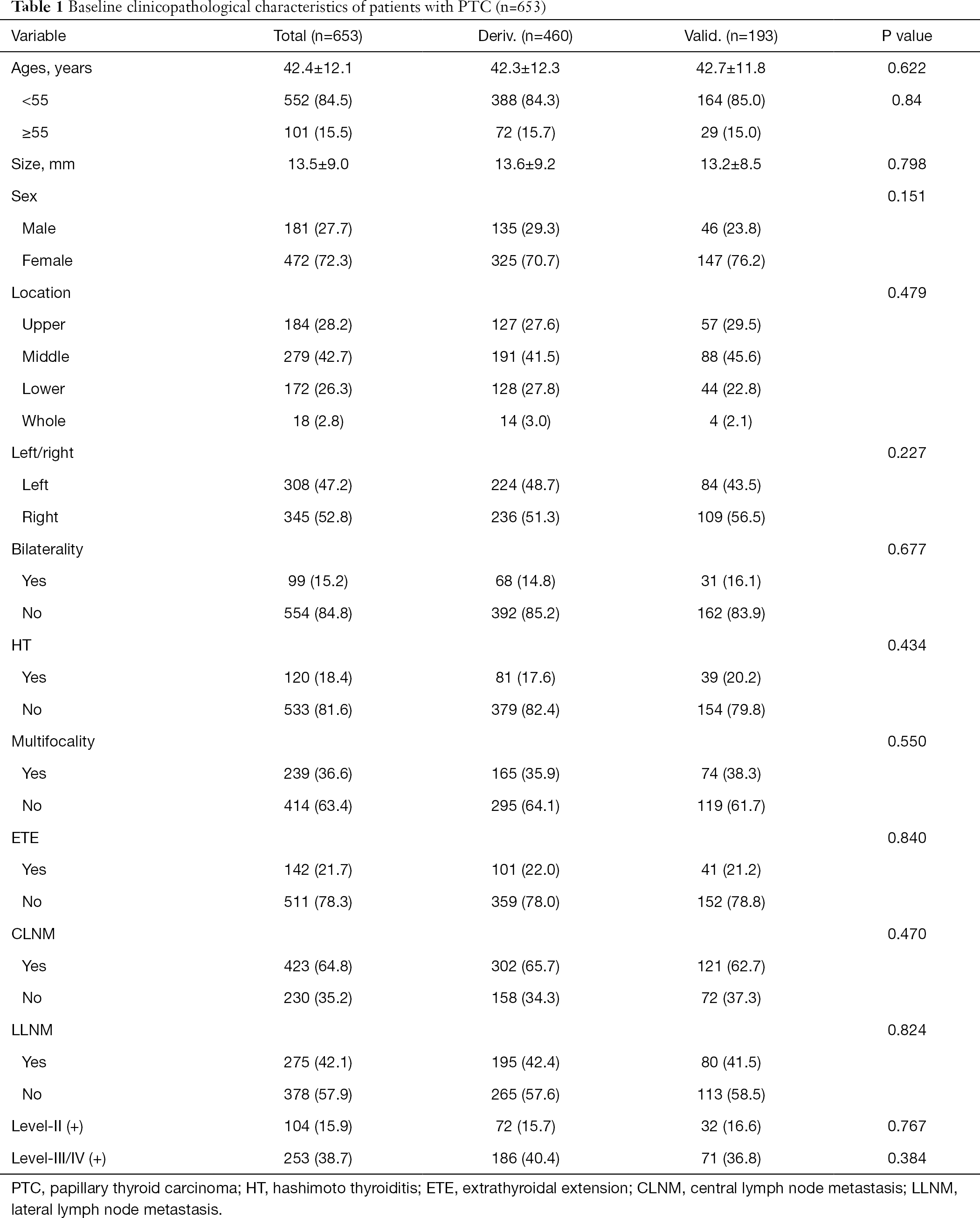 Clinicopathological characteristics of patients in the derivation group 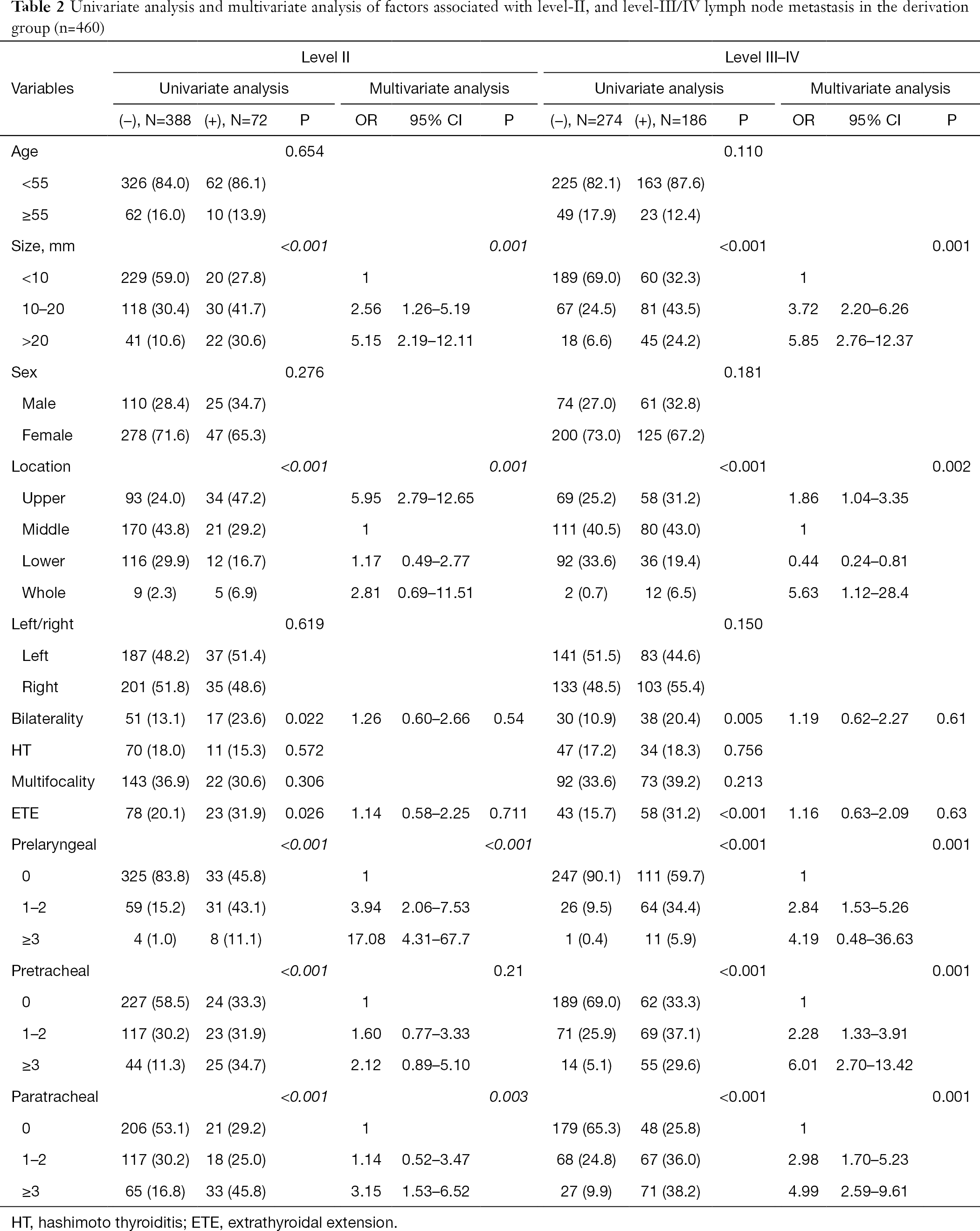 Based on a multivariate logistic regression analysis of the derivation group, we developed two models that incorporated significant risk factors for each lymph node group area, one with and one without subregions of CLNM. 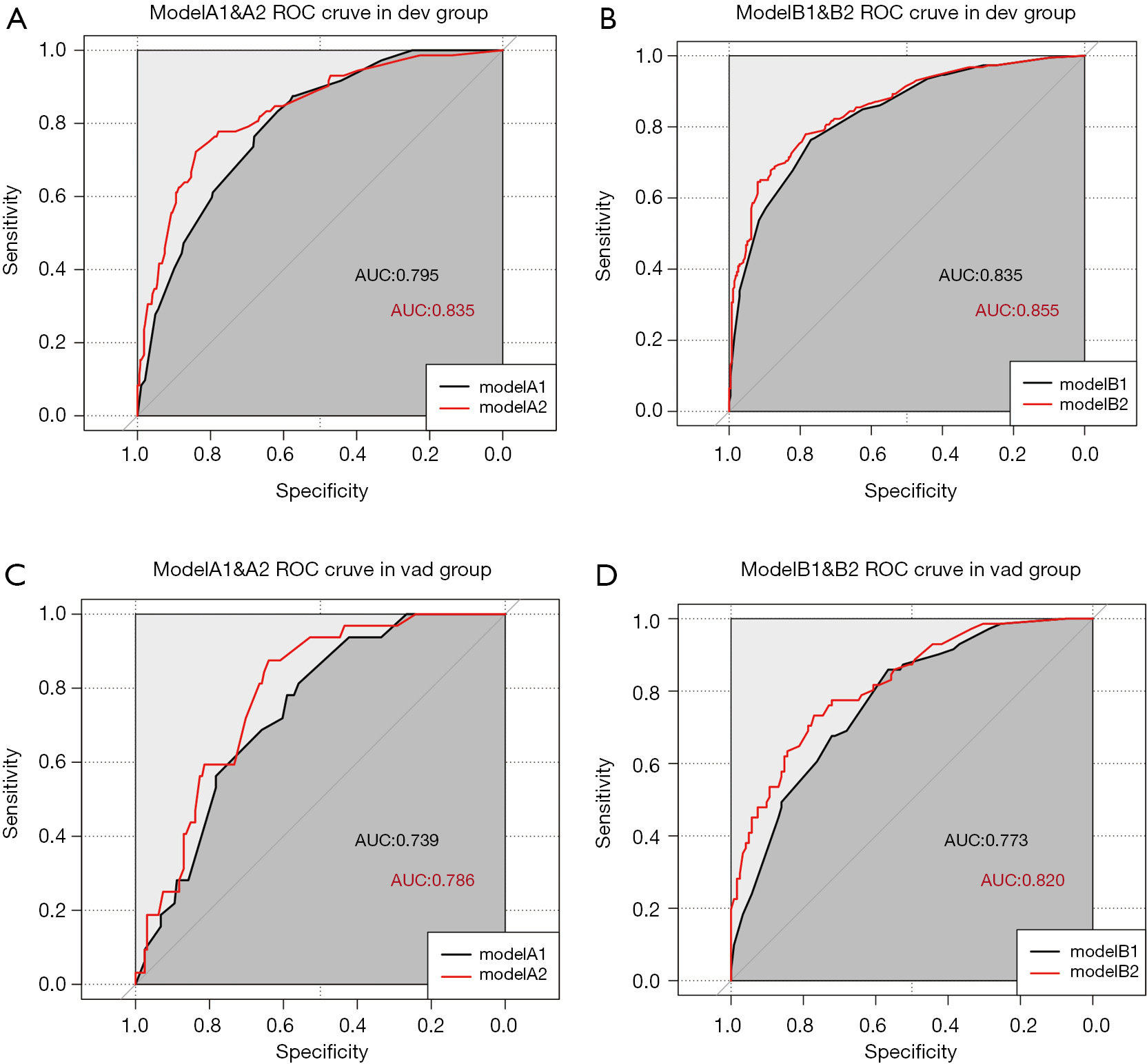 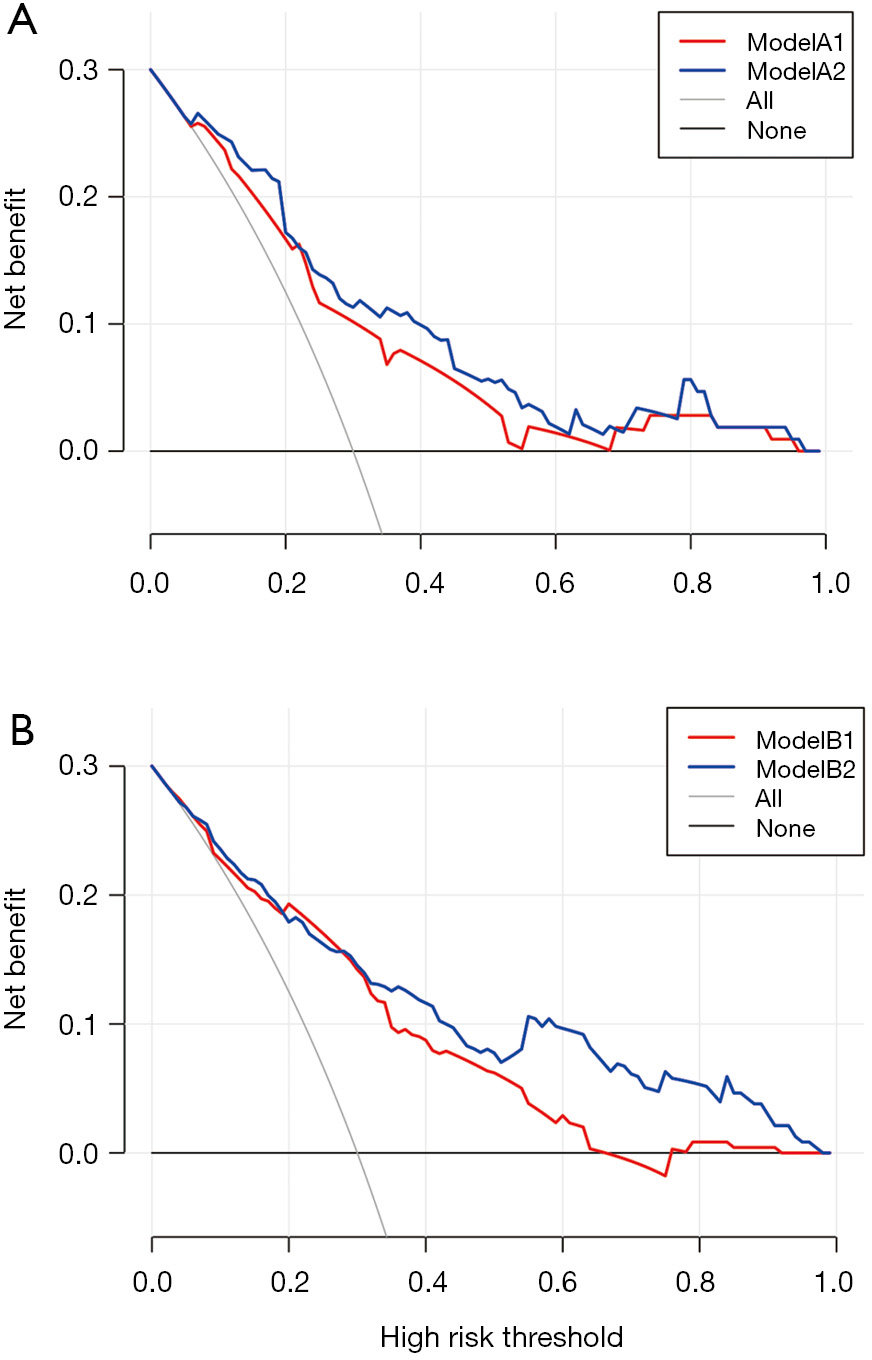 Based on the results of the DCA, we developed nomograms for level-II and level-III/IV LNM (Figure 3). Analysis of level-II lymph nodes indicated that prelaryngeal LNM had the largest effect, followed by tumor size, tumor location, and paratracheal LNM. Pretracheal LNM was not an independent factor for level-II metastasis. Analysis of level-III/IV lymph nodes indicated that prelaryngeal, pretracheal, and paratracheal LNMs had significant and independent effects. The nomograms show the score of each measured variable on each scale. Thus, the probability of level-II or level-III/IV metastasis for each individual is determined by the total score of all variables. A clinician can estimate the individual probability of a level-II or level-III/IV metastasis by simply entering the necessary clinicopathological data, which are available online (https://thyroidcarcinomacqmu.shinyapps.io/level2/ and https://thyroidcarcinomacqmu.shinyapps.io/level34/). Figure 4 shows a screenshot of an example from the web-based nomogram for level-III/IV metastasis. This example shows a hypothetical patient with PTC who had an 8 mm tumor on the upper lobe with metastasis to 2 prelaryngeal lymph nodes, 0 pretracheal lymph nodes, and 1 paratracheal lymph node. The results show that this patient has a 56% probability of level-III/IV LLNM. Any computer system with R software can also launch the nomogram locally, following download of the bundled program. 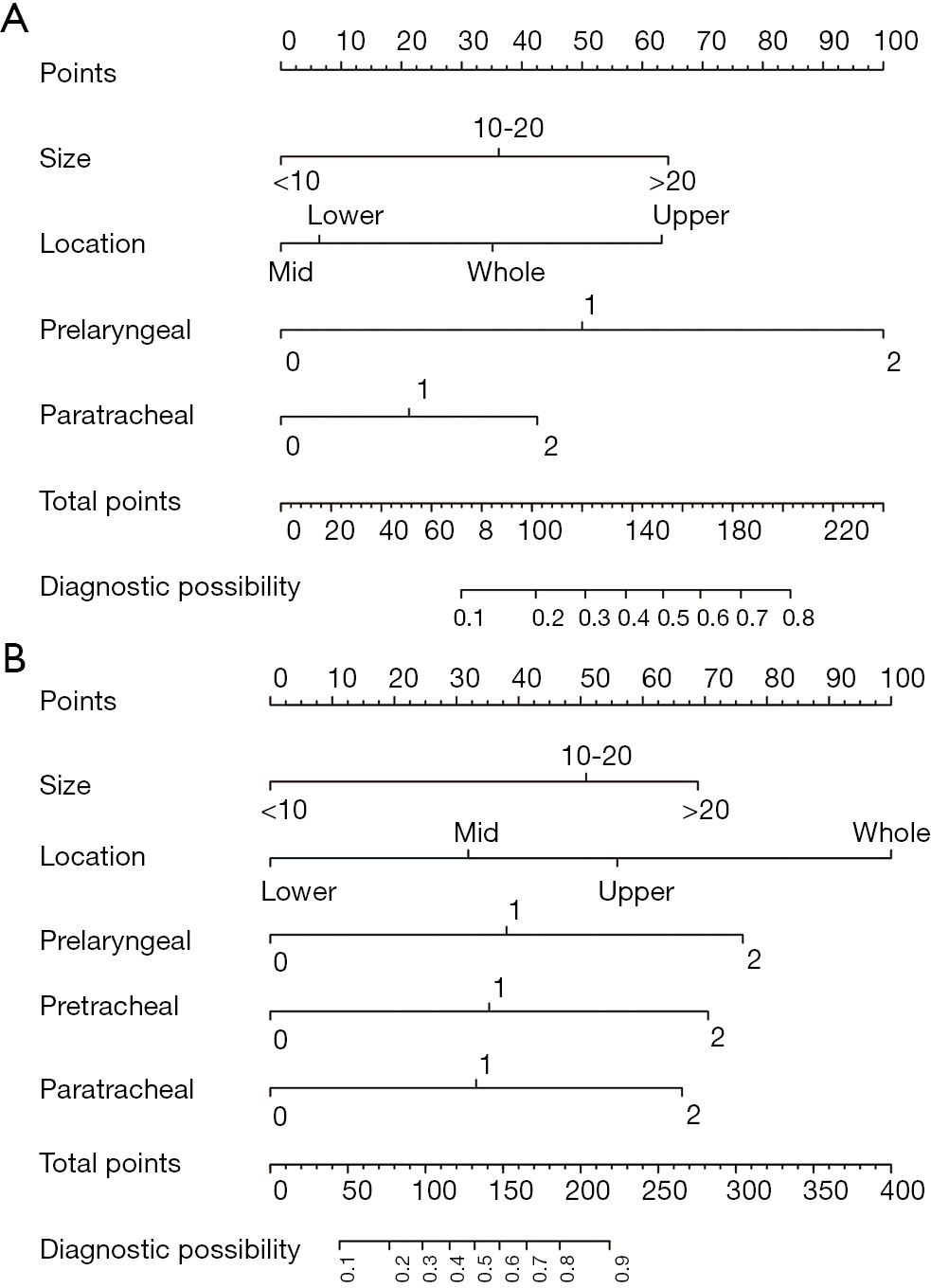 Decisions regarding the extent of surgery needed for a patient with PTC are mainly based on the preoperative assessment of lymph node status (16,17). Even patients with clinical negative lymph node (cN0) PTC, 41.6% have CLNM (18) and 35% have LLNM (19). Intraoperative FSE is the best method of providing pathological evidence during the operation, and the results of this procedure can be used to guide more accurate lymph node dissection.

To the best of our knowledge, this is the first study of PTC patients to compare the risk of LLNM in different subgroups of patients with CLNM. We found that different subregions of the CLNs played important roles in predicting LLNM. For example, the presence of 2 or more prelaryngeal lymph node metastases (rather than no metastases) was associated with a 17.08-fold increased probability of level-II metastasis, but pretracheal lymph node metastasis had no significant effect on level-II metastasis. The relationship of the anatomical distance from the site of metastasis to the pretracheal lymph node area and level-II metastasis should also be considered. Other studies have reported that the positivity of CLNs is valuable in prediction of LLNM (20,21), however, “skip metastasis” (LLNM without CLN involvement) is also common (3.0% to 21.8%) (22,23). In agreement, 35 of our patients (5.4%) had positive LLNM and negative CLNM. Therefore, a single pathway, or sentinel lymph node, may not adequately characterize cervical lymph drainage. It is better to regard the subregions of CLNs as independent regions.

Level-II to level-IV is the main area of thyroid lymphatic drainage, and LNM is most common in this region (24). However, the American Thyroid Association (ATA) and the National Comprehensive Cancer Network (NCCN) provide no clear recommendations regarding the extent of lateral cervical lymph node dissection to be used. Considering the low rate of metastasis, the presence of “skip metastasis”, and the greater difficulty and complications associated with level-II lymph node dissection, we considered level-II lymph nodes in an independent prediction model.

Our univariate and multivariate analyses indicated that the probability of LLNM (level-II and level-III/IV) increased with primary tumor size. This is in accordance with a previous study (25), which reported that a PTC size of 1.0 cm or more was associated with a 2.49-fold increased risk of LLNM. This is also in line with our finding that clinical TNM stage is related to tumor size. Therefore, regardless of clinical lymph node positivity, clinicians should consider the LLNs in patients with larger PTCs.

Our univariate analysis showed that the risk of LLNM was not associated with patient age, in agreement with the results of Farrag et al. (29) and Merdad et al. (30). A previous study reported that males had a higher risk of LNM (31). However, we found that males and females had similar risk for LLNM (level-II and level-III/IV), in agreement with two other studies (32,33).

Our univariate analysis indicated that the risk of level-II and level-III/IV LNM was significantly greater in patients with bilateral tumors, but this association was not significant in the multivariate analysis. Girardi et al. (34) found that ETE was an independent risk factor for LLNM. In contrast, we found that ETE had no significant predictive value for LLNM, as was also the case in several other studies (29,35).

We found that tumor location (left vs. right side of the thyroid) had no impact on the risk for LLNM. This suggests that lymph nodes on each side of the thyroid use the same drainage pathway, as previously reported (32). Our multivariate analysis indicated no significant effect of multifocality or HT on LLNM. A previous study also reported no association between multifocality and LLNM (34), and another study reported no significant association of HT with cervical LNM (36). Interestingly, a meta-analysis (37) suggested that PTCs in patients with HT had a marginally signiﬁcant negative association with LLNM [odds ratio (OR) =1.3, P=0.041].

There were several limitations in this study. First, the validation of the nomograms might be biased by institutional diagnostic patterns, so further evaluations using external datasets and long-term follow-up are necessary. Second, we did not have comprehensive data on the preoperative clinicopathological characteristics of the patients. Data on microRNAs, PTC subtypes, and BRAF v600e mutations should be considered for subsequent predictive models.

In conclusion, our study of patients with PTC indicated that level-II LLNM was significantly associated with tumor size, presence of a tumor in the upper lobe, and prelaryngeal and paratracheal CLNM. Level-III/IV LLNM was independently associated with tumor size, tumor location, and all subregions of CLNM. Based on these findings, we established two web-based nomograms to predict LNM in patients with PTC. Clinicians can use these nomograms to evaluate patients based on preoperative characteristics and intraoperative FSE, and consider regional LLN dissection for those with high scores. Use of these nomograms may also reduce unnecessary preventive lymph node dissection.

Conflicts of Interest: All authors have completed the ICMJE uniform disclosure form (available at http://dx.doi.org/10.21037/gs.2020.01.11). The authors have no conflicts of interest to declare.

Ethical Statement: The authors are accountable for all aspects of the work in ensuring that questions related to the accuracy or integrity of any part of the work are appropriately investigated and resolved. All patients provided written informed consent for their information to be stored in the hospital database and used for research, and this study was approved by the Medical Ethics Committee of The First Affiliated Hospital of Chongqing Medical University (ID: 20197901).