Internal mammary lymph node (IMLN) and axillary lymph node (ALN) belong to the “first station” lymph node of breast cancer lymphatic drainage, and internal mammary lymphatic vessel is one of the most important metastatic pathways of breast cancer. For breast cancer patients, IMLN metastases has a similar prognostic effect as ALN, which is also important for regional staging and subsequent treatment (1,2). With the appearance of “modified injection technique”, the identification rate of internal mammary sentinel lymph node (IM-SLN) has been significantly improved. Internal mammary-sentinel lymph node biopsy (IM-SLNB) might become a minimally invasive technique to evaluate the status of IMLN effectively as well as to guide the individualized diagnosis/treatment (3). To validate the accuracy of IM-SLNB, our center started a multi-center validation trial to perform IMLN dissection on patients with positive ALNs when they finished IM-SLNB (Clinical Trial: NCT03024463). The bilateral IMLN found by preoperative lymphoscintigraphy is a rare phenomenon. Here we will introduce a case that one female patient treated in our hospital in January 2019. Preoperative lymphoscintigraphy revealed that there were “hot-spots” in left and right second intercostal space. So, she received ipsilateral IM-SLNB and IMLN dissection. At the same time, contralateral IM-SLNB guided by modified injection technique was also performed. Here is the introduction of the case. We present the following case in accordance with the CARE Guideline.

Our case was a 61-year-old woman with a painless tumor about 3.5×3.0 cm2 in her left breast for one week. She was admitted to our hospital in January, 2019. Pathology result of preoperative core needle biopsy confirmed invasive ductal carcinoma. Ultrasonography revealed several enlarged ALNs, and ultrasound-guided fine needle aspiration (FNA) was performed on the largest one (1.5×1.0 cm2) with malignant cytology discovery. Magnetic resonance imaging revealed that an enlarged IMLN (0.7×0.7 cm2) was located in left second intercostal space. Due to the IMLN had deep anatomical position, the FNA biopsy could not reach the proper position. Imaging examination found no metastases in bone, brain or liver. The clinical stage for this patient was cT2N2M0, stage IIIA. This patient had no relevant family, psycho-social, and genetic history. The study was approved by the Shandong Cancer Hospital Affiliated to Shandong University Ethics Committee. Informed consent was obtained from this patient for the publication of this case report.

She received surgery in 10th January, 2019. Under the guidance of ultrasound, thirty-seven MBq of 99mTc-labeled sulfur colloid (99mTc-SC) (1.2 mL volume) was injected into the left mammary gland at 6 and 12 o’clock of the areola surrounding area guided by modified radiotracer injection technique 15 h before surgery (Figure 1). Preoperative lymphoscintigraphy revealed that there was a “hot-spot” in left second intercostal space. At the same time, right second intercostal space also had a “hot-spot” scanned by lymphoscintigraphy (Figures 2,3). Blue dye (4 mL) was injected subcutaneously around the tumor 10 min before surgery. Then the patient received mastectomy and axillary lymph node dissection (ALND). After finishing breast and axillary surgery, the first IM-SLN was found by the hand-held gamma probe in the left second intercostal space as the lymphoscintigraphy revealed. Using the mastectomy incision, from the position where IM-SLN was located, the pectoral major muscle fibers were separated to expose the posterior intercostal space. The external and internal intercostal muscles were divided from the sternal border. Then the first IM-SLN was removed (Figure 4). In the left third intercostal space, we found another IM-SLN using gamma probe. This IM-SLN was removed in the same way. The first IM-SLN was about 0.7 cm in diameter and nuclide count was 10, it did contain metastases after routine pathology. The second IM-SLN was about 0.5 cm in diameter, and the nuclide count was 2, it was negative in the end. After finished IM-SLNB, the IMLN dissection was performed. The pectoralis major muscle was severed at the edge of sternal border from first rib to the fourth rib. Then resection of the intercostal muscles and careful opening of the thin anterior leaflet of the parietal pleura in the parasternal area. Ligation the internal mammary blood vessel at the first and third intercostal. Cutting the second and third costal cartilages in their sternal junctions using a scalpel. Ribs traction toward the lateral side of the chest to allow IMLN dissections. Excision of any lymph node tissues found, including surrounded fatty tissues from first to the third intercostal. Then the costal cartilages were sutured (Figure 5). The IMLN dissection procedure lasted 40 minutes. After finishing the left IMLN dissection, the right IM-SLNB was performed using a new incision. From the position where IM-SLN was located, skin and subcutaneous tissues were cutting. Using the same method, the right IM-SLNB was performed. In the right second intercostal space, we found the IMSLN of about 0.5 cm in diameter, and the nuclide count was 25. The patient had no complications. 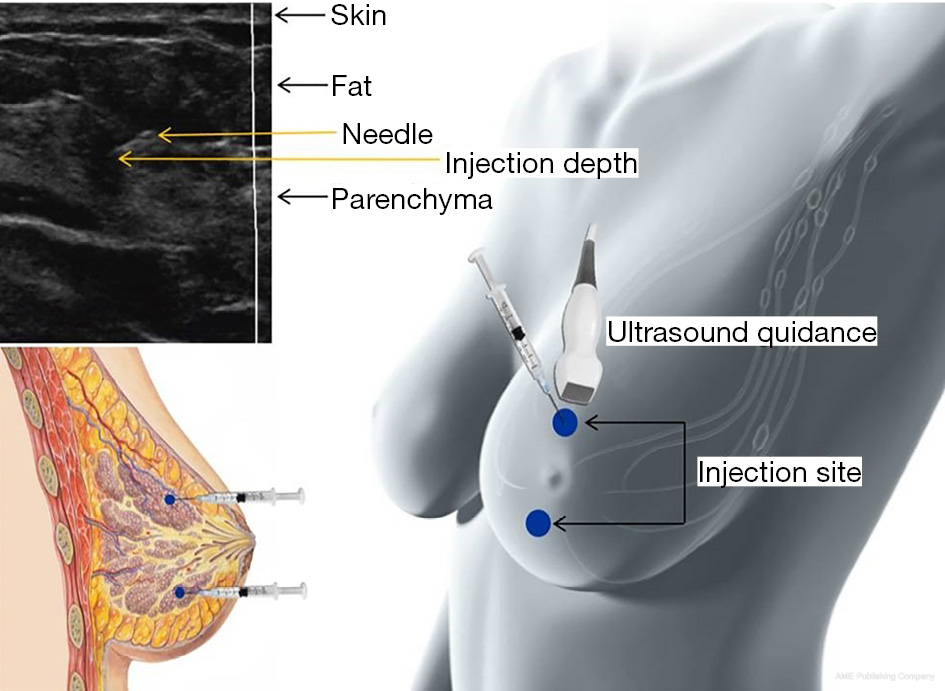 Figure 1 99mTc-labeled sulfur colloid was injected into the mammary gland at 6 and 12 o’clock of the areola surrounding area guided by modified radiotracer injection technique. 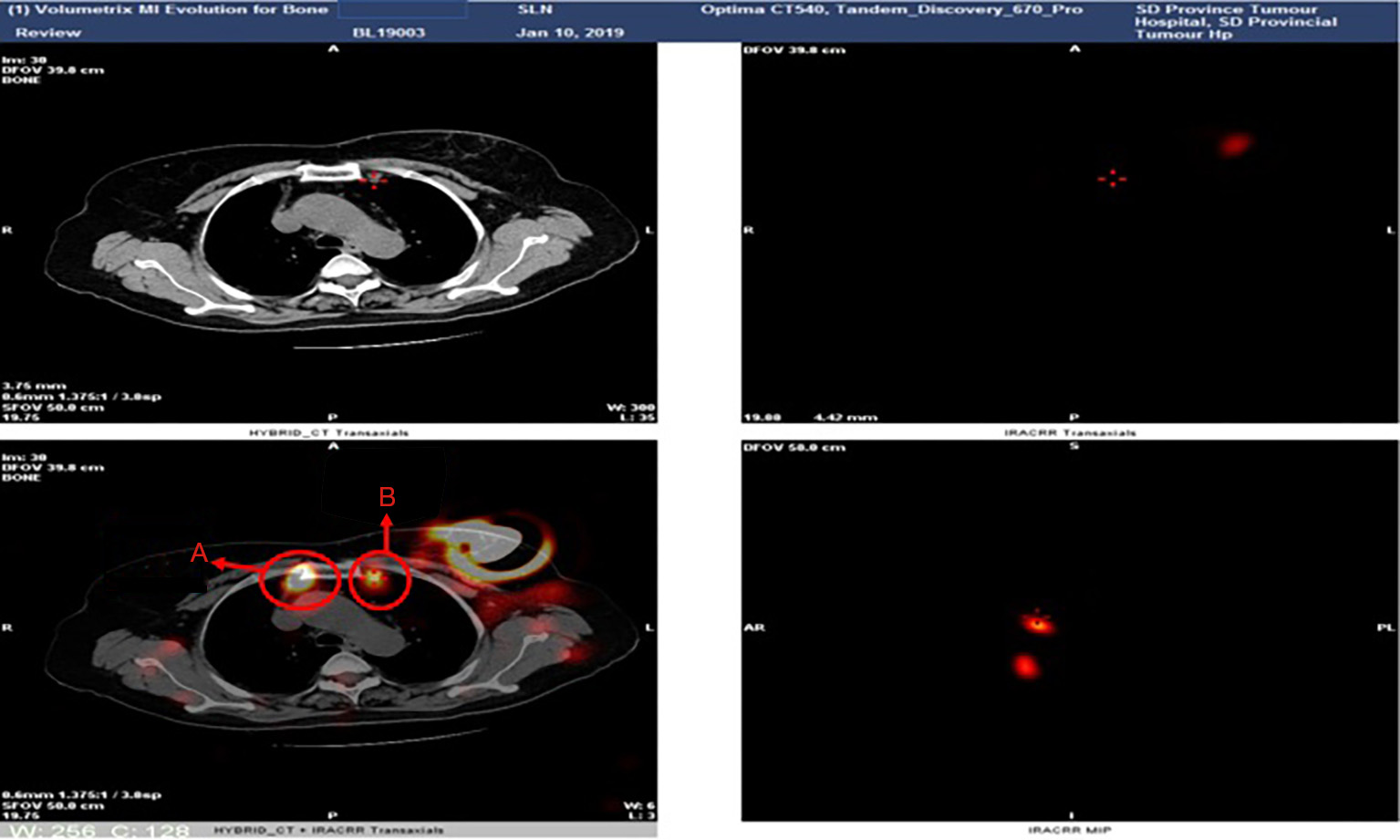 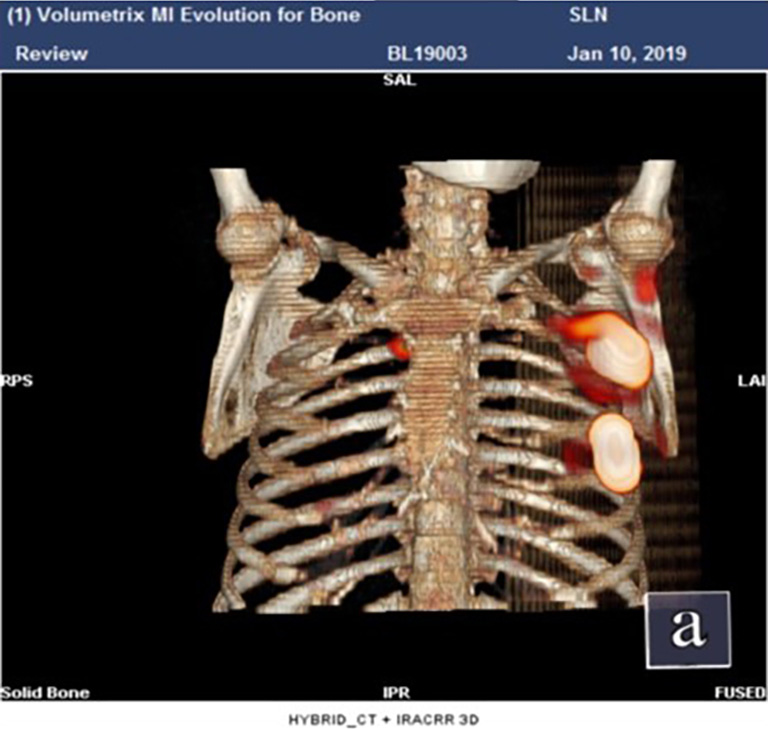 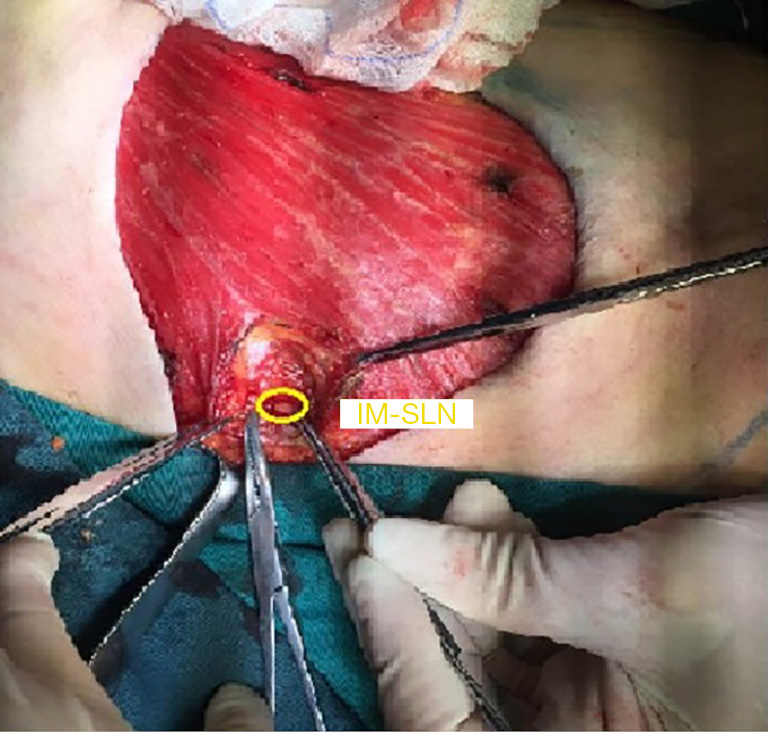 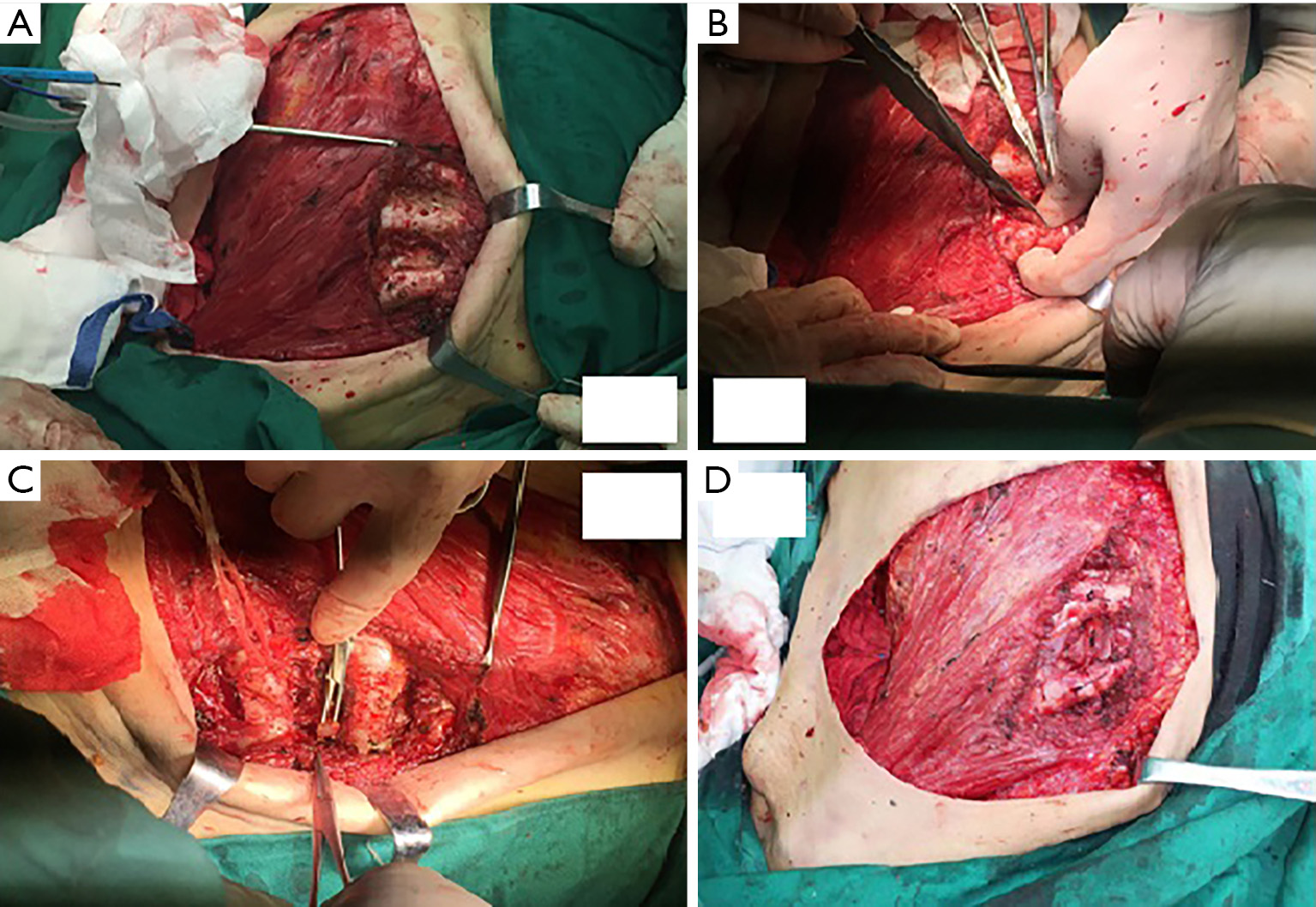 Figure 5 The procedure of IMLN dissection. (A) The pectoralis major muscle was severed from first rib to the fourth rib; (B) cutting the second and third costal cartilages; (C) excision of lymph node tissues from 1st to the 3rd intercostal; (D) suture of costal cartilages. IMLN, internal mammary lymph node.

IMLN has been well known to usually have a deep anatomical position and small diameter (<0.5 cm), and the sensitivity of imaging examination cannot meet the clinical requirements to detect IMLN metastases. With the development of SLNB technique, IM-SLNB is expected to be a minimally invasive diagnostic technique in assessing the status of IMLN metastasis (2). The accuracy of axillary-SLNB (A-SLNB) has been proved by ALND. The lymphatic vessels drainage from whole breast parenchyma could reach to the same axillary sentinel lymph node (A-SLN). According to the A-SLN lymphatic drainage pattern, Cong et al. (10) hypothesized that IMSLN receives lymphatic drainage from not only the primary tumor area, but also the entire breast parenchyma. To observe the accuracy of IM-SLNB, different tracers (radiotracer and fluorescence tracer) were injected into different locations of the breast (the primary tumor and subareolar plexus). The results showed the lymphatic drainage from different location of the breast could reach the same IMLN. At the same time, Cao et al. (11) injected 99mTc-Dextran 40 into breast intra-parenchyma by modified radiotracer injection technique. Subsequently, SPECT/CT combination images were performed to identify the radioactive lymph vessels and IMLNs. The result showed that drainage lymphatic vessels were found from injection point to the first IMLN (IM-SLN) after 10.5±0.35 min radiotracer injection. But there was no anatomical study about IMLN lymphatic drainage due to the abandon of extended radical mastectomy.

Although the IM-SLNB could guide IMLN radiotherapy, unfortunately, the indication of IM-SLNB had not been confirmed. Recently, our investigators proposed that if IM-SLN is the only metastatic lymph node in IMLN chain, the radiotherapy and its associated complications could be avoided in those patients without positive IM-SLN. Furthermore, after IM-SLNB, if there present metastatic non-SLN (NSLN) in IMLN chain, it is important to predict the risk of IM-NSLN metastasis in IM-SLN positive patients. As there is currently no such model, a predictive model for IM-SLN positive patients to avoid radiotherapy is needed in this situation. Therefore, a prospective multi-center study was designed as a clinical verification of IM-SLNB (Clinical Trial: NCT03024463). In our current study, all the participants would have the preoperative pathology of invasive breast cancer and positive FNA result in their ALN. 99mTc-SC was injected into the parenchyma using modified radiotracer injection technique 3~18 hours before surgery. IM-SLNB was performed in all participants with IM-SLN visualized on preoperative lymphoscintigraphy and/or detected by the intra-operative gamma probe. All hotspots in the IMLN were harvested and intra-operative identification of the IM-SLN was based on gamma probe detection. IMLN dissection of the first to the third intercostal was performed immediately after IM-SLNB. Finally, all the IMLN dissected were assessed post-operatively by H&E and Cytokeratin-19 stained immunohistochemistry. Up to now, a total of 73 IM-SLN of 61 patients were obtained. The false-negative rate of our study was 3.85%. The relevant research results will be announced in the next year.

In conclusion, the IMLN have played a very important role in the surgical approach of breast cancer. When the ipsilateral internal mammary lymphatic vessels are obstructed, deep lymphatic system might drain from ipsilateral IMLN to contralateral IMLN. IM-SLNB guided by the modified radiotracer injection technique has a high accuracy. We recommend IM-SLNB should be performed in all patients, especially in patients with clinically positive ALN. IMLN radiotherapy should be tailored and balanced based on the statues of IM-SLN.

Conflicts of Interest: All authors have completed the ICMJE uniform disclosure form (available at http://dx.doi.org/10.21037/gs.2019.12.19). The authors have no conflicts of interest to declare.

Ethical Statement: The authors are accountable for all aspects of the work in ensuring that questions related to the accuracy or integrity of any part of the work are appropriately investigated and resolved. Informed consent for the publication of the report, and the accompanying images, was provided by the patient. The submission version of the report was read by the patient, and the report’s content was confirmed as being correct to the best of her knowledge.