Thymoma and thymic carcinoma are rare neoplasms that are nevertheless the most common tumors of the mediastinum. Thymic carcinomas exhibit more aggressive properties and higher metastatic potential than thymoma (1). Thymic squamous cell carcinoma (TSCC), which is the most common type of thymic carcinoma, is not particularly responsive to chemotherapy or radiotherapy. Radical resection is the primary treatment option and possibly the only potentially curative option for TSCC.

The thymic lobules have a capsule and the mediastinal fat is confined by pleura. When thymic tumors are accompanied by myasthenia gravis, total thymectomy is required to remove the thymus, all adipose tissue in the anterior mediastinum between the two phrenic nerves, and the left and right cardiophrenic angle lymph nodes (2). Tumor recurrence may occur if the TSCC and surrounding adipose tissue are not completely removed. The carcinogenesis of TSCC is unclear, and the manifestations of this disease vary. Most TSCC are single, and multiple TSCC is extremely uncommon. Multiple TSCC can present as multiple primary tumors or as metastatic nodules. Each nodule in multiple TSCC harbors unique biological information that can enrich our knowledge regarding TSCC (3,4).

In this study, we sequenced the whole exomes of 3 TSCC nodules in a multiple TSCC patient and a paired peripheral blood sample and identified single-nucleotide variants and small insertions and deletions. We sought to elucidate the mutational profiles of multiple TSCC and expand our understanding of tumorigenesis and treatment options for these tumors.

A thymic mass was incidentally found in a 45-year-old man 10 days before his admission to the hospital. Positron emission tomography (PET)/computed tomography (CT) indicated that the patient had three thymic nodules with diameters of 3.0, 1.5 and 1.2 cm and max standard uptake values (SUVmax) of 12.2, 8.1 and 8.1, respectively. He underwent extended thymectomy for multiple thymic neoplasms at Zhongshan Hospital, Fudan University (Shanghai, China) and was pathologically diagnosed with multiple non-keratinizing squamous cell carcinomas (Figure 1). We obtained a peripheral blood sample and three tumor tissue samples from this patient (Figure S1). Genomic DNA samples were extracted from freshly frozen tumor tissues and mononuclear cells (isolated from peripheral blood via Ficoll gradient centrifugation) from this TSCC patient for whole-exome sequencing. Written informed consent was obtained from the patient, and ethical approval was obtained from the Zhongshan Hospital Research Ethics Committee. 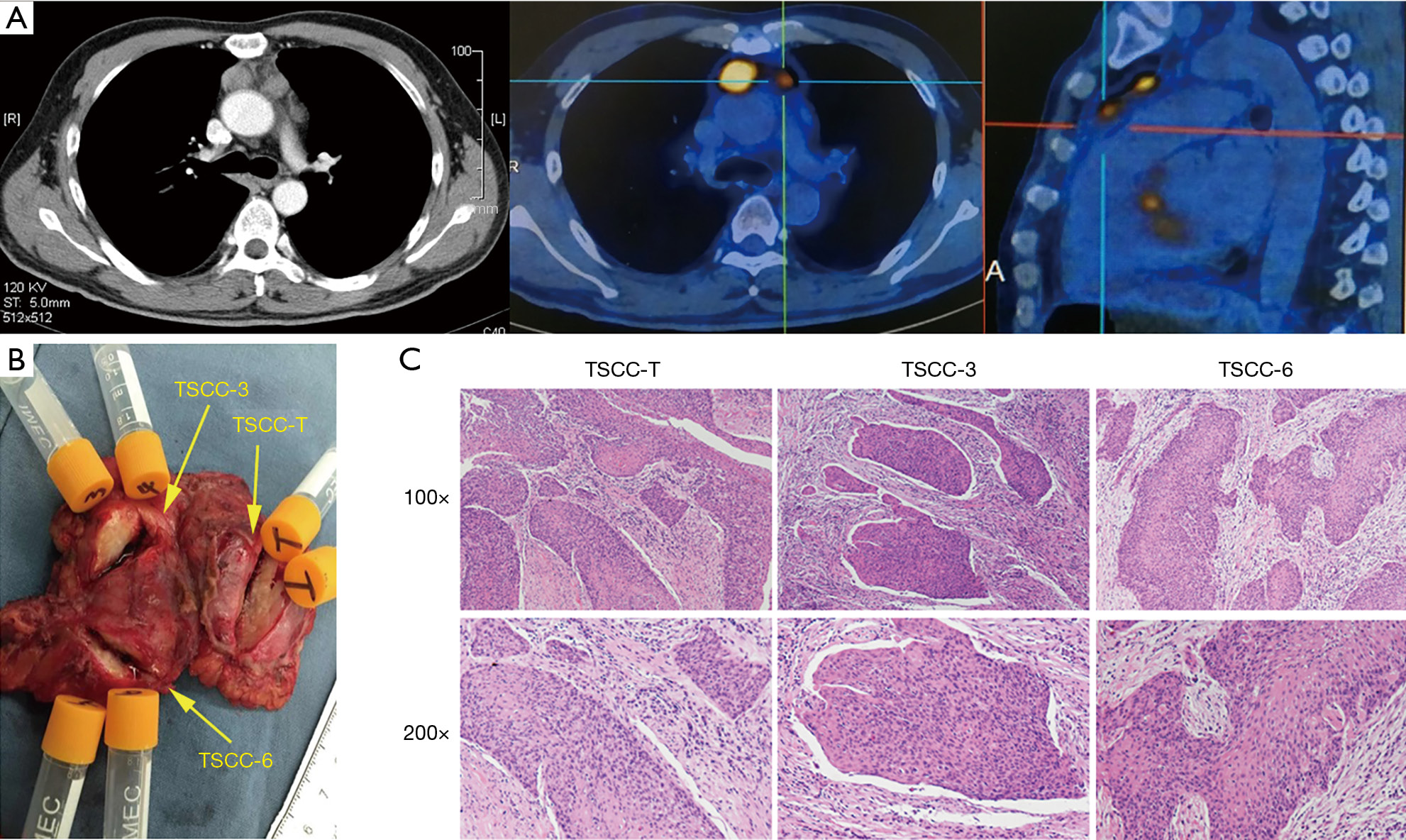 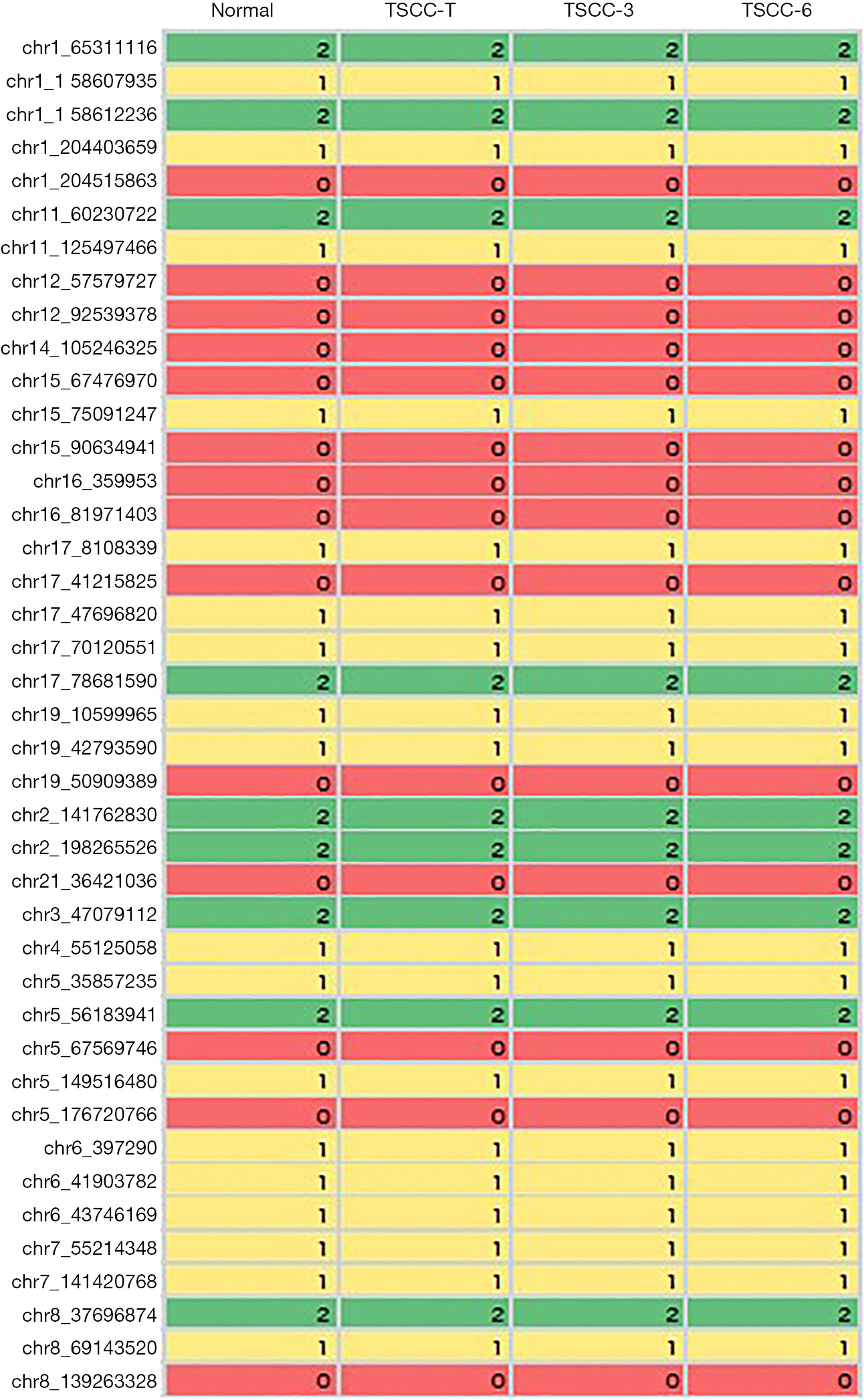 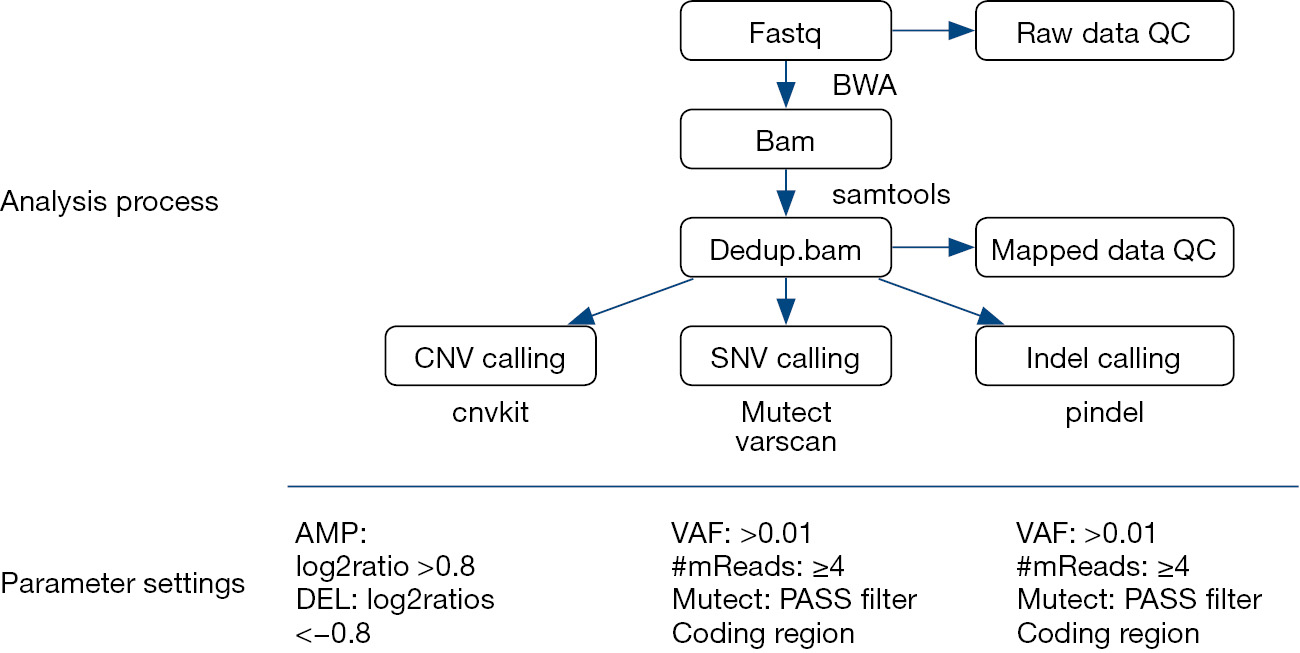 To obtain insights into genetic alterations that characterize TSCC, we examined a TSCC patient with multiple tumors and performed whole-exome sequencing analysis on 3 tumors and a matched peripheral blood sample. We identified 116, 94 and 98 somatic non-synonymous single-nucleotide variations (SNVs) and insertions/deletions (indels) in coding regions in the 3 assessed TSCC nodules (Figure 2). To determine whether the multiple thymic nodules were derived from one single nodule with intrathymic metastases or multiple primary thymic tumors, we analyzed the distribution of all of the somatic mutations and observed that 71 somatic mutations were present in at least one tumor region and that 34 mutations, including mutations in TP53, ARID1A, and NOTCH1, among others, were present in all 3 TSCC nodules (Table 1). Moreover, without exception, these 34 mutations involved the same single nucleotide change at the same position in all 3 TSCC nodules. In prior studies, 409 cancer-related genes were sequenced in 12 TSCC tissues with no recurrent mutations observed among the sequenced samples, indicating that TSCC is highly heterogeneous (7). Therefore, our results suggest that the multiple thymic nodules within the examined individual were likely derived from a single nodule. 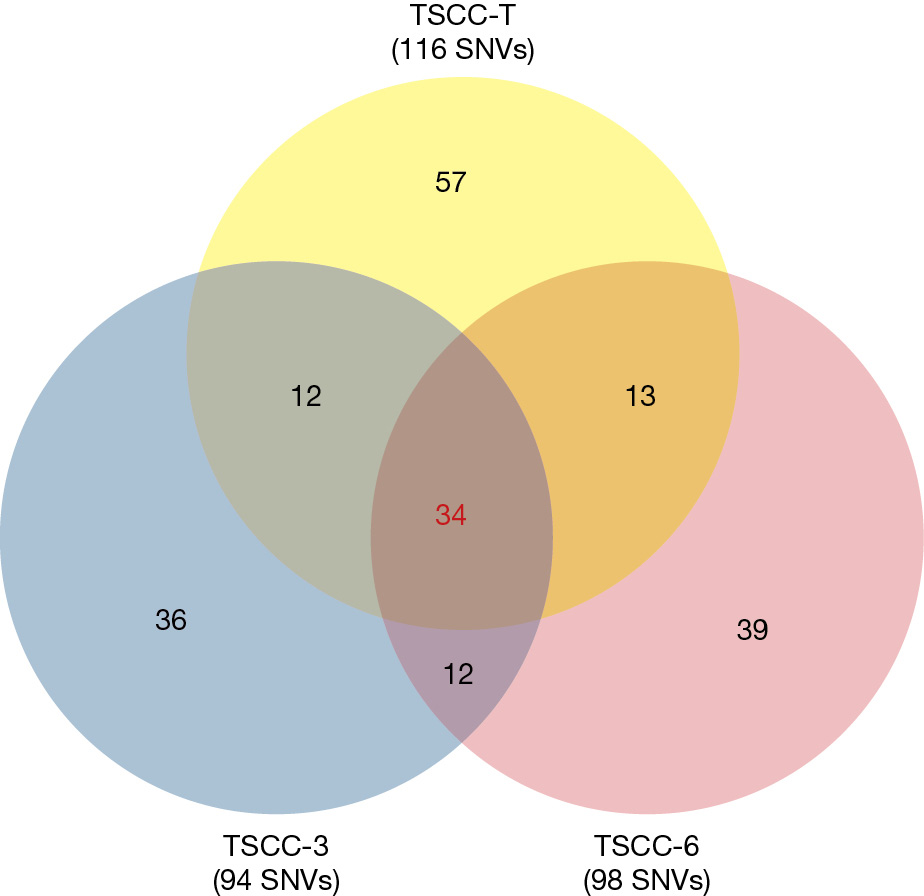 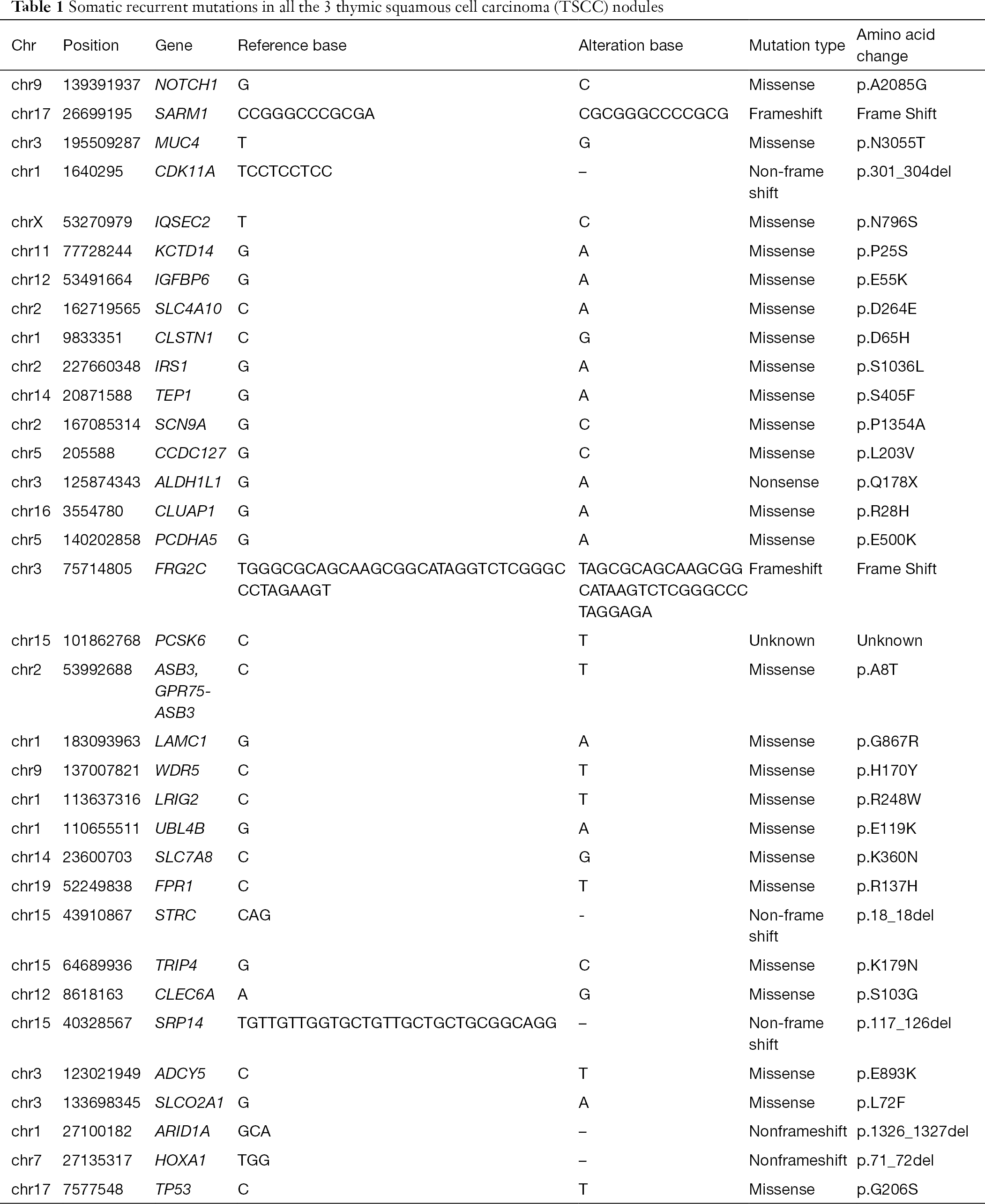 Subsequently, to study TSCC-related gene amplification and loss, we detected copy number variations (CNVs) in samples from the examined patient and identified 393 CNVs involving 259 genes in all TSCC samples (Figure 3). Moreover, 58 CNVs (involving the gain or loss of 37 genes), which accounted for approximately 15% of all identified CNVs, were common to all TSCC samples. Certain CNVs, including CNVs in SPTA1, PRKAR1A and RANBP2, have been reported to be related to human tumors and were first found to be related to human thymic epithelial tumors (3,12).

Gene ontological and pathway analyses were also performed. These analyses revealed that the 3 TSCC nodules had similar significantly enriched pathways based on the identified genetic alterations. Certain pathways, including the GnRH, Notch and MAPK signaling pathways, may play a role in the development of TSCC (Figure 4). 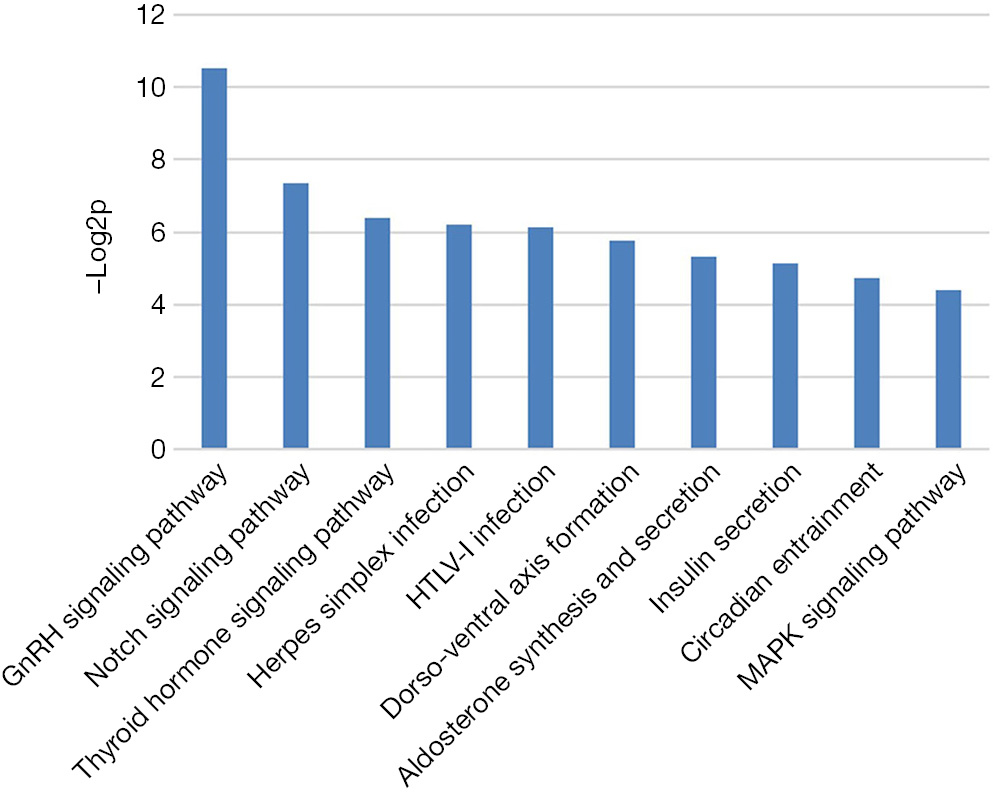 Figure 4 Enriched pathway analysis based on the identified genetic alterations.

A preoperative enhanced chest CT scan indicated that this patient had 3 thymic nodules that were spatially independent of each other. All of these thymic nodules were resected and pathologically diagnosed as squamous cell carcinoma. To analyze the histological sources of the 3 TSCC nodules, the nodules were subjected to hematoxylin-eosin staining, and pathologists concluded that all 3 nodules were highly similar with respect to histology and appeared to be derived from the same tumor. To further clarify the histological relationship among these 3 nodules, we performed immunohistochemistry to examine 2 mutated genes, TP53 and ARID1A, in these nodules and found that all 3 TSCC nodules expressed similar levels of ARID1A. TP53 expression was inhomogeneous in local tumor tissues but similar in overall tumor tissues (Figure 5). 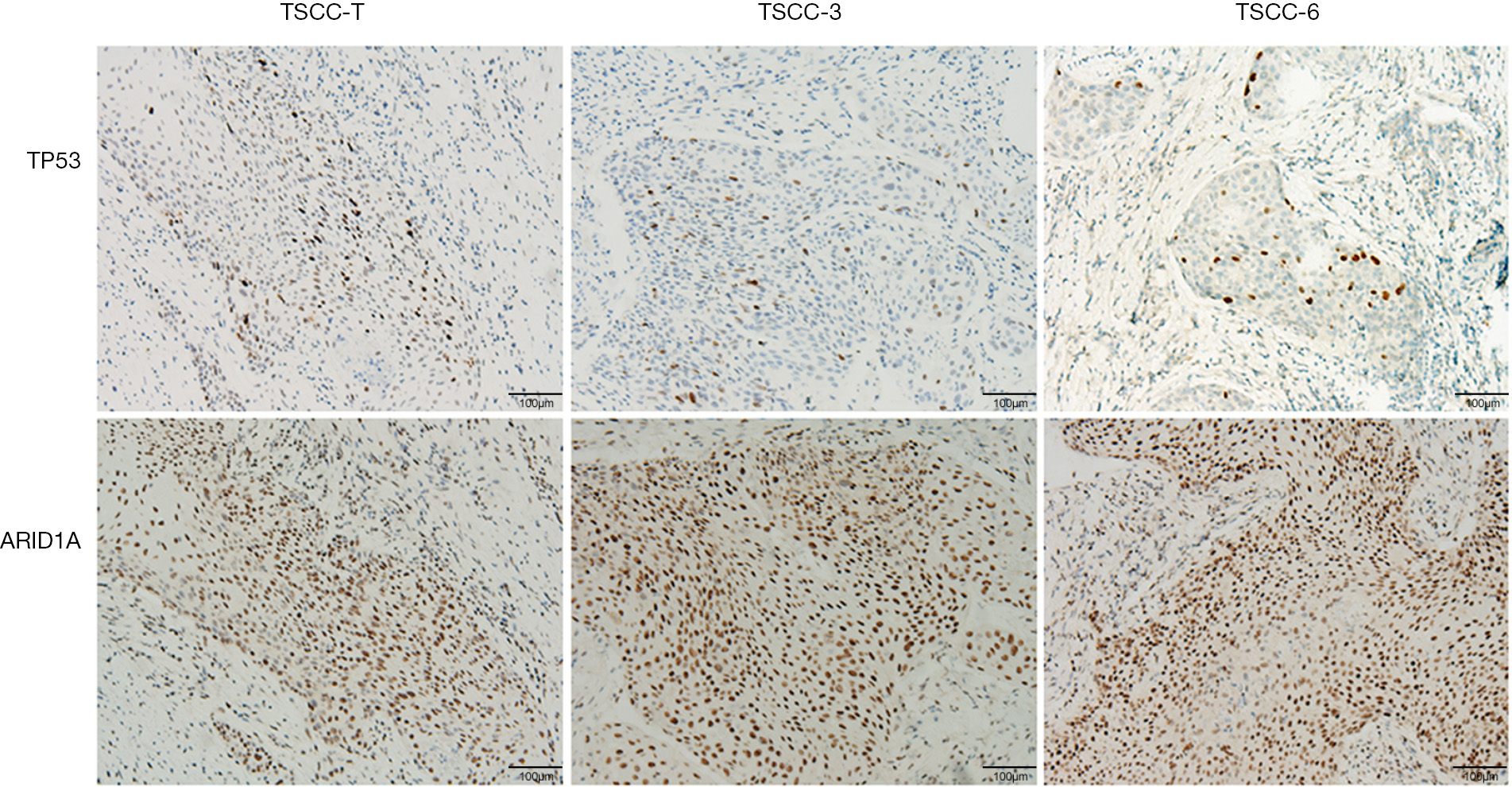 The development of thymic tumors involves dynamic interplay between thymic epithelial cells and their surrounding microenvironment (7,13). Even within the same thymus, different thymic epithelial cells can evolve into diverse thymic epithelial tumors after experiencing a series of common or different genetic mutations. These different tumors are typically regarded as multicentric thymic tumors based on tumor heterogeneity (14,15). However, in the present study, various genetic and histological data are presented to demonstrate the phenomenon that multiple thymic tumors may be derived from the same tumor clone, indicating that in multiple TSCC, certain thymic tumors are likely to be metastases from a primary tumor. These findings help to deepen our understanding of thymic epithelial tumors. The thymic lobules have a capsule which consists of thymus tissue, adipose tissue degenerated from the thymus after adulthood, and the thymus lymph nodes. Thus, the potential correlation between the primary tumor and the metastases reminds us that probable communication channels may present in the thymic lobules that facilitates tumor recurrence and metastasis. This communication channel may be present in both TSCC and thymoma. This finding suggests that total thymectomy is necessary for either thymic carcinoma or thymoma to reduce the likelihood of tumor recurrence and improve survival.

In addition, we observed that although the different TSCC nodules were extremely similar histologically, they did not exhibit identical genetic changes. In contrast, large differences were observed. Each tumor nodule had its own unique genetic changes that distinguished it from the other tumor nodules. These findings suggest that metastatic TSCC tumors continue to undergo evolutionary processes and gradually become new TSCC nodules that differ from primary tumors. This implication may help us understand the mechanisms of recurrence, metastasis and drug resistance in TSCC.

While the genetics of thymic carcinomas has been reported, few has focused on the genetic alternations in the multiple thymic carcinoma given to its rarity. Thus, the exome sequencing of multiple TSCC provides the complement to the profile of genetic aberrations in thymic epithelial carcinoma. We also detected genetic aberrations, including mutations in TP53, ARID1A, NOTCH1, GNAQ, KMT2C and SPEN, and CNVs, including CNVs in SPTA1, PRKAR1A, and RANBP2, that are likely to be associated with TSCC. In prior reports, exome sequencing showed that TP53 was the most frequently mutated gene in TSCC and that TP53 mutation was associated with a higher rate of recurrence (8,16). Other studies have demonstrated that the disruption of NOTCH1 pathways is involved in the development of thymic mucoepidermoid carcinoma (9). Thus, some genetic aberrations may ubiquitously occur in thymic epithelial tumors. However, the functions of most of the identified genes associated with thymic epithelial tumors remain unclear. These genes may be involved in tumor development and progression in unknown ways. Further research is needed to clarify these issues.

In conclusion, our findings suggest that there may be a potential communication channel in the thymic capsule that likely facilitates thymic tumor recurrence and metastasis. Thus, total thymectomy may be a good treatment option for not only malignant thymic epithelial tumor patients but also thymoma patients.