Renal hyperparathyroidism (rHPT) is an intractable disease of patients with chronic kidney disease (CKD), leading to substantial morbidity or mortality (1,2). Although diet regulation, sufficient hemodialysis, medical treatment such as vitamin D and calcimimetics, and parathyroidectomy (PTX) are effective in most cases (2), there are still several patients having persistent or recurrence of rHPT (1). Parathyromatosis, which is defined as multiple foci of benign hyperfunctioning parathyroid tissue in neck or mediastinum (3), is a rare but severe cause of persistent/recurrent rHPT. It is difficult to detect and remove all the foci. 99mTc-methoxyisobutylisonitrile (MIBI) SPECT/CT has been used to detect hyperfunctioning parathyroid glands for its high sensitivity and specificity in patients with rHPT (2,4). We report a case of rHPT who achieved long-term recurrent-free after the third surgery guided by the preoperative 99mTc-MIBI SPECT/CT localization of the hyper-functioning parathyroid tissues.

A 61-year-old woman with renal failure due to microscopic polyarteritis on maintenance hemodialysis regularly since 2004 developed rHPT. Refractory to medical treatment, she received parathyroidectomy (PTX) and transplantation of parathyroid tissue into the muscle of right forearm in December 2012. During the operation, 3 enlarged parathyroid glands (PTGs) were found and removed. The 3 PTGs located relatively at the superior left, superior and inferior right of the thyroid bed, measuring 2.4 cm × 1.6 cm, 1.0 cm × 1.2 cm and 0.6 cm × 0.8 cm, weighed 6.1, 1.2 and 0.5 g respectively, and were all revealed hyperplastic nodular parathyroid tissue histopathologically. Thymectomy was not performed. After the first operation, her serum calcium and parathyroid hormone (PTH) levels decreased to 7.3 mg/dL and 211 pg/mL, respectively. In July 2013, due to elevated PTH (>3,480.0 pg/mL) and serum calcium levels (3.17 mmol/L), she received a second operation to remove implanted parathyroid tissue. And then, her serum calcium (2.24 mmol/L) and PTH (62.8 pg/mL) dropped. However, her PTH raised progressively up to 1,253.1 pg/mL until she had a percutaneous ethanol injection therapy (PEIT) of the auto-transplantation site in April 2015. Unfortunately, her PTH (3,342.0 pg/mL), serum calcium (3.52 mmol/L) both raised up again 5 months later. In September 2015, 99mTc-MIBI imaging performed. Dual-phase planar imaging showed three foci of elevated uptake on early phase (Figure 1A) and slowe washout on delayed phase (Figure 1B) of the tracer, which were identified by cross section images of early phase SPECT/CT (Figure 1C,D,E). In October 2015, the patient received a third surgery. During the operation, guided by the result of 99mTc-MIBI, 3 nodules were identified and then removed (2 nodules beneath the platysma muscle measuring 1 cm × 1 cm each, the other one above left to sternum measuring 2 cm × 2 cm). It was proved pathologically that all the 3 were hyperplastic parathyroid tissues (Figure 1F,G,H). Postoperative (at 24 hours) serum calcium and PTH were 2.77 mmol/L and 109 pg/mL respectively. The patient’s PTH remained stable in the range 15.0–80.0 pg/mL during the 31 months follow-up until the last visit (Figure 2). 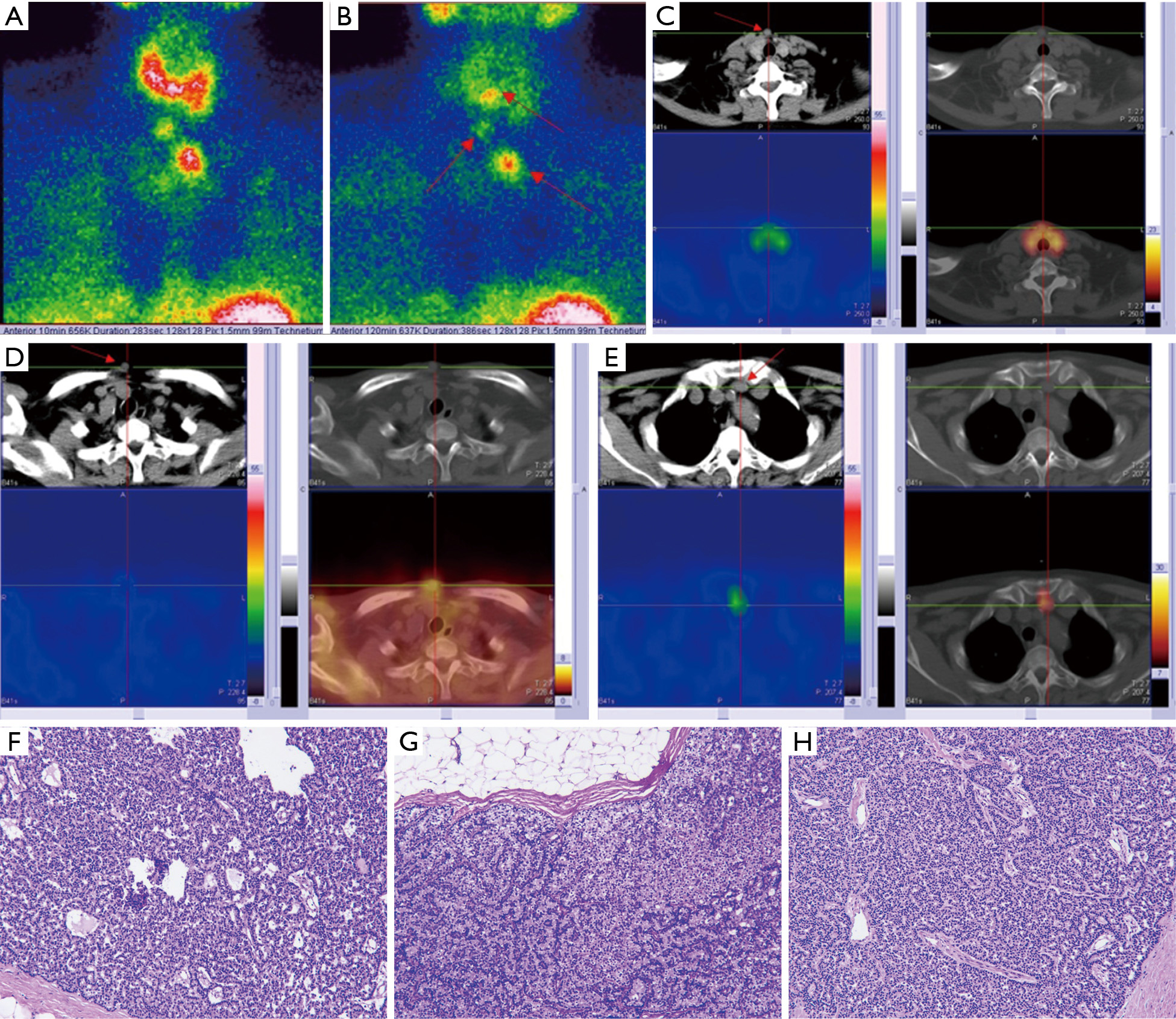 Figure 1 99mTc-MIBI imaging before 3rd PTX. 99mTc-MIBI dual-phase planar imaging showed three foci (red arrows) of elevated uptake on early phase (A) and slowe washout on delayed phase (B) of the tracer, which were identified by SPECT/CT: (C,D,E). Histopathology (H&E, ×100) showed two benign parathyroid nodules beneath the platysma muscle (F,G) and another one above left to sternum (H).

Several factors have been associated with persistent or recurrence of rHPT, including surgical inexperience, ectopic or supernumerary glands, parathyroid carcinoma, and, rarely, parathyromatosis (5). Parathyromatosis was first described by Palmer et al. in 1975 (6), defined as multiple foci of benign hyperfunctioning parathyroid tissue in the neck or mediastinum (3). By Reddick et al. in 1977 (3), parathyromatosis was classified into 2 types (3,7): Type 1, defined as parathyroid rests left behind during ontogenesis that develop under the physiologic stimuli; Type 2, defined as a consequence of spillage and seeding of parathyroid tissue within the operative field as the result of improper handling of the glands during surgical extirpation (8). The autograft of parathyroid tissue which cause recurrence of disease is considered as type 2 parathyromatosis (9). The first cause of recurrence/persistence of rHPT of this case is type 2 parathyromatosis, including intended autograft in arm and non-intended seeding in subcutaneous tissue during operation. We speculated that rupture of capsule happened during the first surgical exploration. The second cause is the gland above and left to the sternum, which should be the left inferior parathyroid gland left in situ after the first operation. All of them were localized by 99mTc-MIBI imaging. Without proper preoperative localization, re-operation may fail to find all of the lesions for recurrent/persistent rPTH patients. Although occasionally successful medical management of a patient with parathyromatosis was reported (10), complete surgical extirpation of all parathyroid tissue is the best option for treatment. But identification of all the hyperplastic foci such as ectopic, supernumerary glands and parathyromatosis is difficult. Currently, ultrasound (US) and 99mTc-MIBI imaging are first-line choices for preoperative localization of hyperfunctioning parathyroid glands (11-13). However, US is operator-dependent and findings of parathyromatosis including multiple hypoechoic or hypervascular nodules appear atypical and non-specific. 99mTc-MIBI SPECT/CT can get over the difficulty in pointing out the location of the lesion than 99mTc-MIBI planar imaging and is helpful to reduce failure rate of surgery (14). Similar to previous studies (2), when 99mTc-MIBI imaging performed in our hospital, patient without special preparation was injected intravenously with 740 MBq of 99mTc-MIBI. Planar imaging of neck and mediastinum was acquired at 10 min (early phase) and 120 min (delayed phase) after injection, while SPECT/CT imaging of the neck and mediastinum was obtained immediately after 10 minutes planar imaging. Interpretation of 99mTc-MIBI images was performed in consensus by 2 experienced nuclear medicine physicians. A positive result was recognized if there was a definite focus of increased or separate tracer uptake relative to the uptake in the thyroid tissue of neck or mediastinum on images (15). Precise location of each focus by cross section images of SPECT/CT was also reported (15).

In conclusion, the present case suggests that 99mTc-MIBI SPECT/CT is valuable for preoperative localization of hyperfunctional glands, especially parathyromatosis, of recurrent/persistent rHPT patients.