Papillary thyroid microcarcinoma (PTMC), is defined as a PTC tumor less than 1cm. We supposed that the proportion of PTMC has been increasing gradually, because of a complex reason such as ultrasonography development, and easy accessibility to examination. Fortunately, PTMC was almost regarded as low risk of recurrence (2.4%), and less than 1% risk of distant metastasis. According to the 8th edition of American Joint Committee on Cancer (AJCC), and 2015 American Thyroid Association (ATA) guidelines, minor extrathyroidal extension (ETE) was categorized to T1 stage, and they recommend hemithyroidectomy for a tumor less than 4 cm. Although central lymph node metastasis was incidentally identified by prophylactic central neck dissection (pCND), they generally recommend hemithyroidectomy, followed by mild TSH suppression therapy (TSH target 0.1–0.5 mU/L), then complete thyroidectomy (1,2). On this trend, hemithyroidectomy as standard treatment for PTMC, will be in a strong position, regardless of central lymph node metastasis.

Two-hundred consecutive patients who received hemithyroidectomy for PTMC, by two endocrine surgeons at Yeungnam University Medical Center February 2011 to March 2013, were enrolled retrospectively. This study was approved by the Institutional Ethics Review Board (2019-05-021). All patients were followed at least for 5 years and examined via laboratory test yearly. Inclusion criteria were as follow: (I) PTC with tumor less than 1cm, proven by histology, (II) not pre-existing hypothyroidism, (III) laboratory test annually for at least 5 years, (IV) follow-up more than 5 years. Two-hundred patients were divided into two groups, according to 1-year TSH suppression. Group 1 equally took levothyroxine (Synthyroxine® 100 mcg, levothyroxine sodium, Northwind Pharmaceuticals, LLC) during 1 year postoperatively, to suppress TSH level within 0.5–2.0 mU/L (suppression group). Group 2 did not take levothyroxine during follow-up (no suppression Group). Serum TSH level was measured periodically in order with preoperative, postoperatively 6 months, and then annually up to 5 years. Laboratory tests such as T3, FT4, thyroglobulin (Tg), and Tg antibody, were examined as the same method. Anti TPO antibody, was checked preoperatively once. Chest X-ray and ultrasonography were examined once a year. Also, we evaluated other clinicohistological factors for developing hypothyroidism (TSH >10) as well as symptoms and identified correlation of additional levothyroxine. 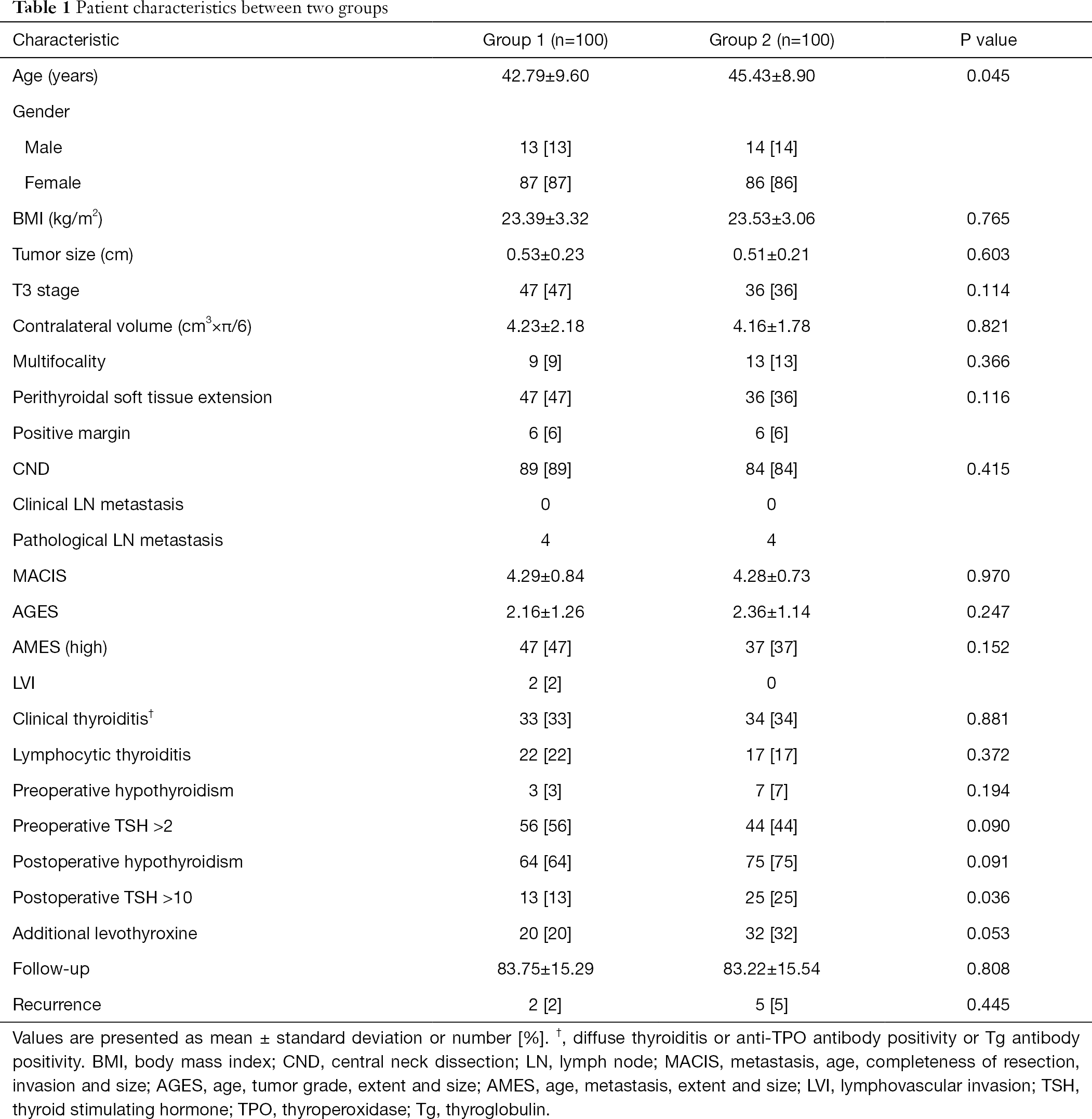 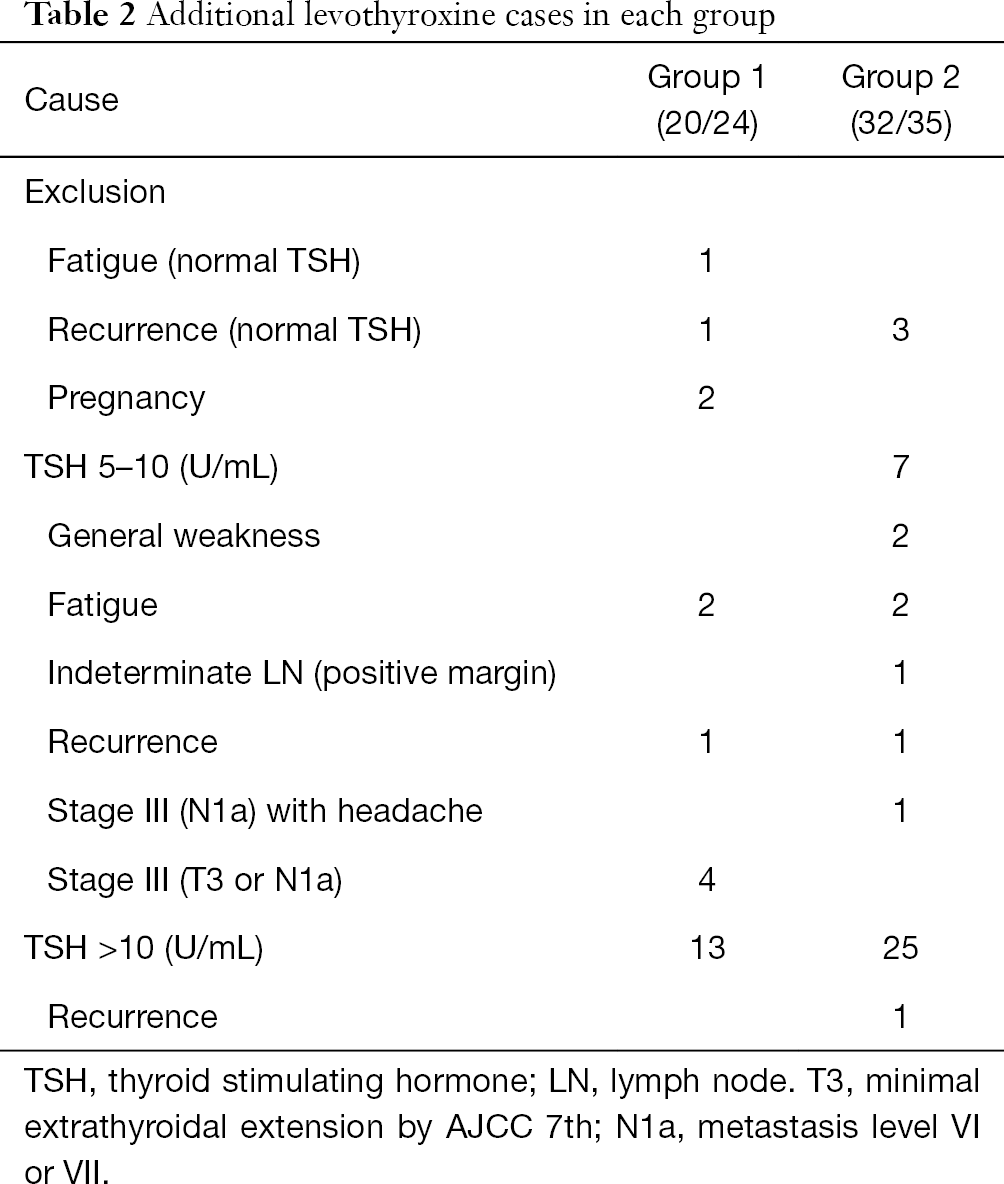 Figure 1 shows mean TSH levels in each group during 5 years. Preoperative TSH was of similar value, between the two groups. However, postoperative 6 months and 1-year TSH levels were inevitably different, because of taking a dose of levothyroxine for 1 year. And then, TSH value tended to be similar, between each group. Finally, 5-year mean TSH level was 3.31 and 3.44 mU/L, respectively. There was no difference between the two groups, except for the 1-year TSH suppression period.

In this study, 200 patients were enrolled retrospectively, February 2011 to March 2013. Minimal extrathyroidal extension (ETE) was categorized to T3 according to AJCC 7th and our institution uses 0.23–3.8 mU/L, as normal TSH range. The major exclusion of this study was pre-existing hypothyroidism, because several previous studies commonly reported preoperative hypothyroidism, as predictive factors for postoperative hypothyroidism. In this study, postoperative hypothyroidism means TSH >3.8 mU/L, without symptoms. According to the 2015 ATA guidelines, they recommend no TSH suppression (TSH target 0.5–2 mU/L), with low risk PTC. However, in cases of no TSH suppression, post hemithyroidectomy was more frequent, above the 0.5–2.0 mU/L range. In our study, T3 (minimal extrathyroidal extension) was 47 and 36, six margin positivity and four central lymph node metastases in each group. In group 2, maintaining target TSH 0.5–2 mU/L was observed as 6% at postoperative 6 months, 10% at 1 year, 13% at 2 years. We used levothyroxine (Synthyroxine 100 mcg) to reduce risk of recurrence and maintain adequate TSH level.

Hemithyroidectomy has been standard treatment, for low risk PTMC. According to AJCC 8th and 2015 ATA guidelines, minimal ETE was newly revised, to T1 and low risk was defined as follow: (I) absence of local or distant metastasis, (II) macroscopic tumor resection completely, (III) no tumor invasion of loco-regional tissues or structures, (IV) No aggressive histology, (V) no vascular invasion, (VI) clinical N0 or ≤5 pathologic N1 micrometastases (<0.2 cm in largest dimension) (1). Recently, clinicians prefer follow up with or without mild TSH suppression, than completion of thyroidectomy in case of a small volume of central lymph node metastasis. As mentioned above, for various reasons, standard treatment for PTMC regardless of N1a, weights on hemithyroidectomy.

It is generally thought that PTMC leads to excellent prognosis, without TSH suppression. Some studies have reported risk of locoregional recurrence is 2.4%, although frequently, lymph node metastasis with PTMC and risk of disease-specific mortality and distant metastasis, were 0% and less than 1% (8). Other studies have reported mortality rate of low risk PTC was 1%, but recurrence rate was relatively high at 8% (9). Too, recurrence rate in the remnant thyroid gland was 2.6% at 10 years, and regional lymph node recurrence was 5.4% at 10 years (10). As mentioned above, most studies considered risk factors such as ETE, lymphovascular invasion, multifocality, and margin positivity. Hemithyroidectomy with PTMC, mild TSH suppression, can be inevitable in existence of risk factors for recurrence. Our study also shows two and five recurrence in each group, and margin positivity, lymphocytic thyroiditis, and multifocality were significant for recurrence.

Suppression therapy is basic on theory, that thyroid cancer cells typically express thyroid stimulating hormone receptor and binding TSH receptor, with levothyroxine lead to inhibitory effect on cancer growth. Some systemic reviews and meta-analyses show that higher TSH level, is associated with higher OR of thyroid cancer (11). Patients who underwent lobectomy for PTMC, and are maintaining target TSH level (0.5–2 mU/L), may not need levothyroxine (12). There is scant evidence to guide TSH target or use of thyroid hormone, in ATA low risk patients who have undergone lobectomy. By contrast, there is lack of evidence, about TSH suppression effect, on normal thyroid glands. Our study shows lower incidence and delayed peak time, of postoperative TSH >10 in the 1-year TSH suppression group. This implies that TSH suppression, has specific influence on normal thyroid tissue. Theoretically, remnant lobe has adequate thyrocytes, to maintain normal thyroid function after lobectomy (13,14). However, our study shows loss of supplementation cause to elevated TSH for 1 year, and then TSH level gradually recovered. It was probably caused by remnant thyroid lobe recovery, as well as adaptation to poor circumferences. Suppressed thyroid lobe has minimalized function during 1 year. It is like cryopreservation of thyrocytes. That leads to immediate evasion of surgical stress during the postoperative period, and restarts the function to maintain normal thyroid, after full recovery the body. We can explain the effect of 1-year TSH suppression, from this evasion phenomenon. Of course, although suppressed thyroid began to work, the function could be somewhat short of the remnant lobe. If this hypothesis is correct, preoperative thyroid function is a very important factor in the occurrence of postoperative hypothyroidism, and it can also be a useful predictive factor.

Limitations of our study were retrospective analysis with a small cohort, and short follow-up. First, selection bias could have existed, because we excluded preexisting hypothyroidism, and same number of patients in each group. Second, although we set a target TSH 0.5–2 mU/L, taking a synthyroxine 100 mcg equally in group 1, led to lower TSH than target range in some patients. Third, duration and timing of TSH suppression lacked evidence, and minimal ETE was categorized to T3 according to AJCC 7th unlike now.

Ethical Statement: The authors are accountable for all aspects of the work in ensuring that questions related to the accuracy or integrity of any part of the work are investigated and resolved. This study was approved by the Institutional Ethics Review Board of Yeungnam University College of Medicine (No. 2019-05-021).