Magnetic resonance imaging of adrenal gland: state of the art

The adrenal glands are a frequently involved site of disease of the general population. Adrenal lesions are often an incidental finding as the use of cross-sectional imaging is increased. When adrenal masses are detected is crucial to discriminate benign from malignant lesions and find out whether the lesion is primary or secondary. The assessment of adrenal disorders can effectively rely on magnetic resonance imaging (MRI) and on its tissue characterizing ability (1). The physiological aspect of adrenal glands, on T1- and T2-weighted imaging, is characterized by low to intermediate signal intensity. Cystic changes, variation in vascularity or hemorrhage may be seen within an adenoma as small, rounded foci of altered signal intensity. Chemical shift imaging (CSI) is the cornerstone of adrenal MRI. The chemical shift phenomenon relies on the differential precession frequencies of protons in lipid and water within the same imaging voxel. The loss of signal intensity on out-of-phase breath-hold gradient-echo MRI when compared with in-phase images, depends on the lower precession frequency of fat protons compared to water protons (2). Many adenomas and especially lipid-rich type show high signal intensity on in-phase imaging and low signal intensity on out-of-phase imaging, allowing recognition on CSI by simple visual assessment (3). The use of splenic intensity on CSI as a reference is the most common method to analyze an adrenal lesion. In lipid-rich adenomas, where the concentration of fat and water protons are equivalent, there is almost complete signal intensity loss on out-of-phase images. Otherwise, in lipid-poor adrenal adenomas, there are no changes of signal intensity on out-of-phase imaging, so implicating that CSI methods are not suitable to determine such lesions. Some lesions as adrenocortical carcinoma (ACC), pheochromocytoma, and clear cell renal cell cancer (CCRCC) metastasis show, sometimes, signal loss on out-of-phase images mimicking benign conditions. Quantitative analysis of the chemical phenomenon is provided by calculation of the adrenal-to-spleen CSI ratio or of the signal intensity index (SII) (3). It is reported that the use of diffusion weighted imaging (DWI) is not useful to distinguish adenomas from non-adenomas because of significant overlap in quantitative apparent diffusion coefficient (ADC) values (4-6). Some studies evaluate dynamic gadolinium-enhanced MRI for distinguishing metastases from adenomas showing some success although a validation by other groups is necessary (7). Dynamic contrast-enhanced imaging (DCI) is a useful modality for differentiating adenoma from malignant lesions. The typical enhancement pattern of most adenomas is an early and uniform enhancement on the arterial phase and a rapid washout on the venous phase. Contrarily, most malignant lesions show poor enhancement on the arterial phase and peripheral or heterogeneous enhancement on the venous phase. Even though DCI alone is not more sensitive than CSI for the characterization of adenoma, it is an important tool for outlining adenomas which are not well characterized by CSI (8). A possibility of overcoming the limitations of morphological image in cases of low-fat adenomas, metastases and heterogeneous masses is magnetic resonance spectroscopy (MRS), a noninvasive technique with which is possible to monitor either acute or chronic stages of a disease (9). Analyzing the choline-to-creatinine ratio, MRS allows to differentiate adenoma from non-adenoma (9). However, MRS is not performed widely because its spectral quality is not enough to draw solid conclusions so that further studies will be needed (Table 1) (10).

The adrenal glands are located in the perirenal space, immediately anterosuperior to the upper pole of the kidneys, with an inverted V or Y shape (11) and dimensions between 2 to 6 mm in thickness and 2 to 4 cm in length. They receive blood supply from the superior, middle and inferior suprarenal arteries, which originate respectively from the inferior phrenic arteries, abdominal aorta and renal arteries (12,13). The venous outflow is different for the two adrenal glands: the right adrenal vein ends in the vena cava, and the left adrenal vein ends in the left renal vein or in the inferior phrenic vein. The gland is composed of an outer cortex, divided into three zones (glomerulosa, fasciculata and reticularis) and a thinner, inner medulla.

Depending on their biological behaviour, adrenal glands lesions can be classified into benign and malignant (primary or metastatic) conditions.

Adrenocortical adenoma: The most common adrenal tumor (14), in most of the cases is nonfunctional and develops in the cortex. If there is a functional adenoma hypercortisolism (or Cushing syndrome) and primary hyperaldosteronism (or Conn’s syndrome) can coexist. The morphologic appearance is a solid tumor, usually small in size (<4 cm), with hemorrhagic or cystic component, and occasionally calcifications. Because of the intracellular lipid, adenomas can be classified in lipid-rich and lipid-poor (Figure 1). As a result of the different precession frequencies of protons in water molecules and fat, on MRI many adenomas show high signal on in-phase imaging and the signal decreases in the out-of-phase imaging. Lipid-rich adenomas, in particular, show high intensity signal on T1- and T2-weighted images. After contrast injection most of adenomas show relatively regular enhancement on immediate gadolinium-enhanced images (15). 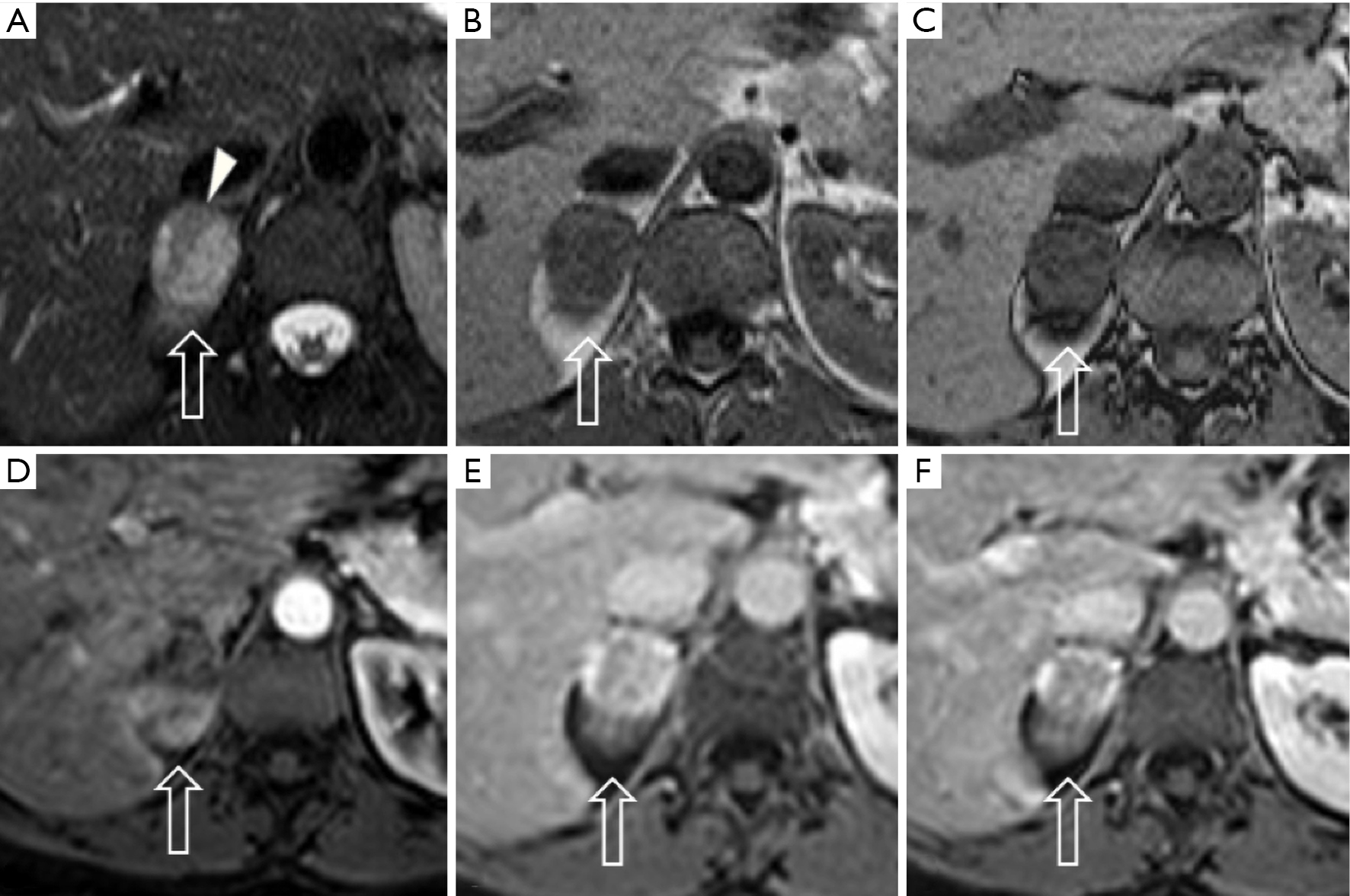 Hyperplasia: it can be diffuse, characterized by homogeneous thickening of the whole gland, or nodular (Figure 2) and it is typically bilateral (16). Most occur in women (1:4 man vs. women ratio). On MRI the signal is the same of the normal adrenal gland (17).

Figure 2 Left adrenal gland macronodular hyperplasia (arrows) in a 46-year-old woman. The lesion appears hypointense on both TSE T2-w sequence (A) and in-phase sequence (B), with a significant signal loss on the out-of-phase sequence (C), coherent with the presence of intracellular fat.

Pheochromocytoma: known as the 10% tumor (10% non-functioning, 10% occur in children, 10% located outside the adrenal gland, 10% bilateral, 10% malignant), is a neural crest cell tumor occurring in the adrenal medulla (Figures 3,4). 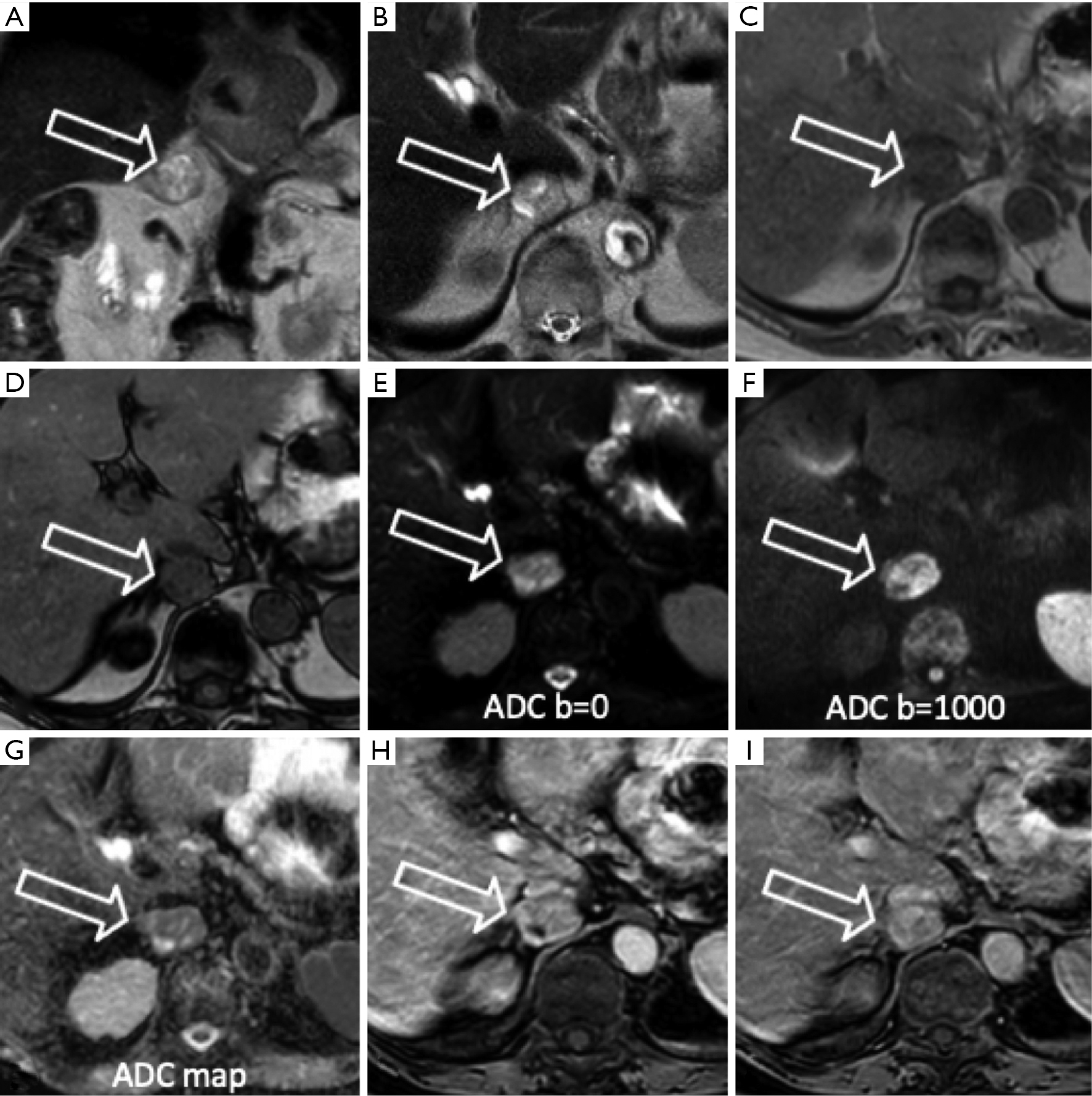 Figure 3 Right adrenal gland pheochromocytoma in a 90-year-old woman. The MRI shows a 32×21 mm solid tissue (arrows), with an irregular shape, directly in contact with the inferior vena cava and the right diaphragmatic crus. The lesion appears hyperintense on coronal (A) and axial (B) plane TSE T2-w sequences, with no significant signal loss between in-phase (C) and out-of-phase (D) sequences. DWI sequences (E,F) and ADC map (G) show restricted diffusion on b=1,000 and ADC map images. After contrast medium injection inhomogeneous enhancement is visible both on arterial (H) and venous (I) phases. DWI, diffusion weighted imaging; ADC, apparent diffusion coefficient. 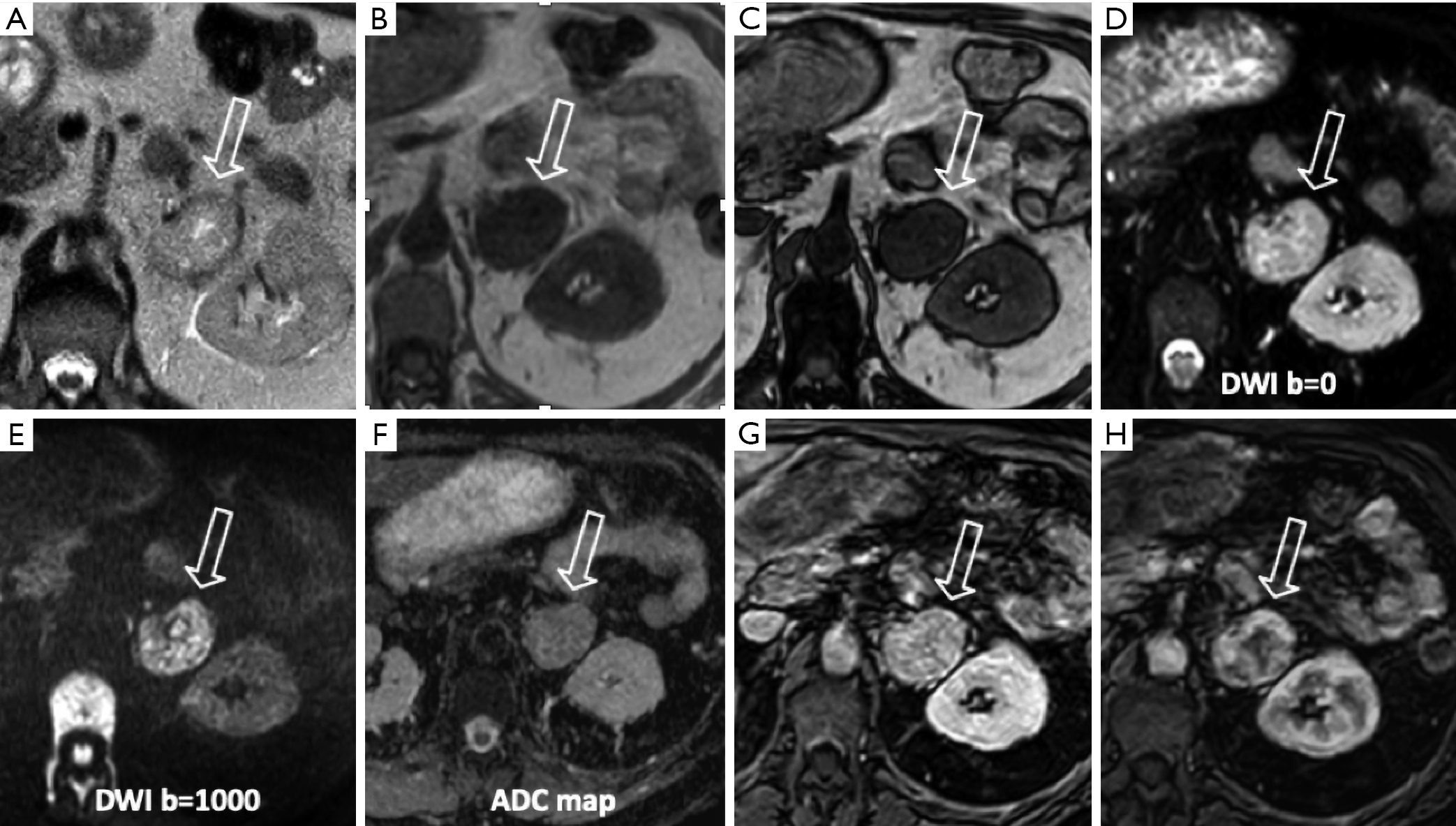 Usually larger than adenomas may appear as a well-defined mass, solid or cystic to variable degrees (18). Pheochromocytomas do not contain a substantial amount of cytoplasmatic lipid and on MRI maintain their signal intensity on out-of-phase gradient echo (GRE) chemical shift images (Figures 3,4). The use of a quantitative T2-weighted signal-intensity ratio could be an important tool to distinguish pheochromocytoma from adenoma, due to the presence of intracytoplasmic lipid that definitely excludes the diagnosis of pheochromocytoma (19,20). On MRI the appearance is heterogeneous, because of hemorrhage and necrosis: in 70% of cases it shows hyperintensity on T2-wheighted images (light bulb sign) (12,21). In the other 30% pheochromocytomas show moderate or low T2-weighted signal intensity and looking alike to other adrenal diseases (15,22).

Cyst: relatively rare, often unilateral. There are four types of cyst: endothelial, epithelial, parasitic and pseudocyst (17,18). Normally it looks like a spherical mass with a distinct border often with thin walls, internal septa and calcifications (13,24). On MRI show high signal on T2-weighted images and low signal on T1-weighted images, and no contrast enhancement after mdc injection.

Cystic lymphangioma: this is a sort of adrenal endothelial cyst (25), a congenital malformation formed by the benign proliferation of primitive lymphatic vessel. On MRI are typically T1 hypointense and T2 hyperintense.

Teratoma: teratomas are solid neoplasm originating from germ cells, with the possibility to differentiate into somatic cells. The typical appearance includes calcifications, hair, teeth, bone, soft tissue and fat. On MRI, T1- and T2-weighted images shows mixed signals. After contrast injection it show slight enhancement of the solid component and in particular a significant enhancement of internal septations and of the peripheral rim.

Neuroblastoma: it is the second most frequent abdominal mass in children, usually occurring in the adrenal medulla (Figure 5) (27). Typically characterized by calcifications, necrotic component, hemorrhagic and cystic changes. On MRI has nonhomogeneous appearance and shows hyperintensity on T2-weighted images and hypointensity on T1-weighted images, with heterogeneous enhancement after mdc injection. 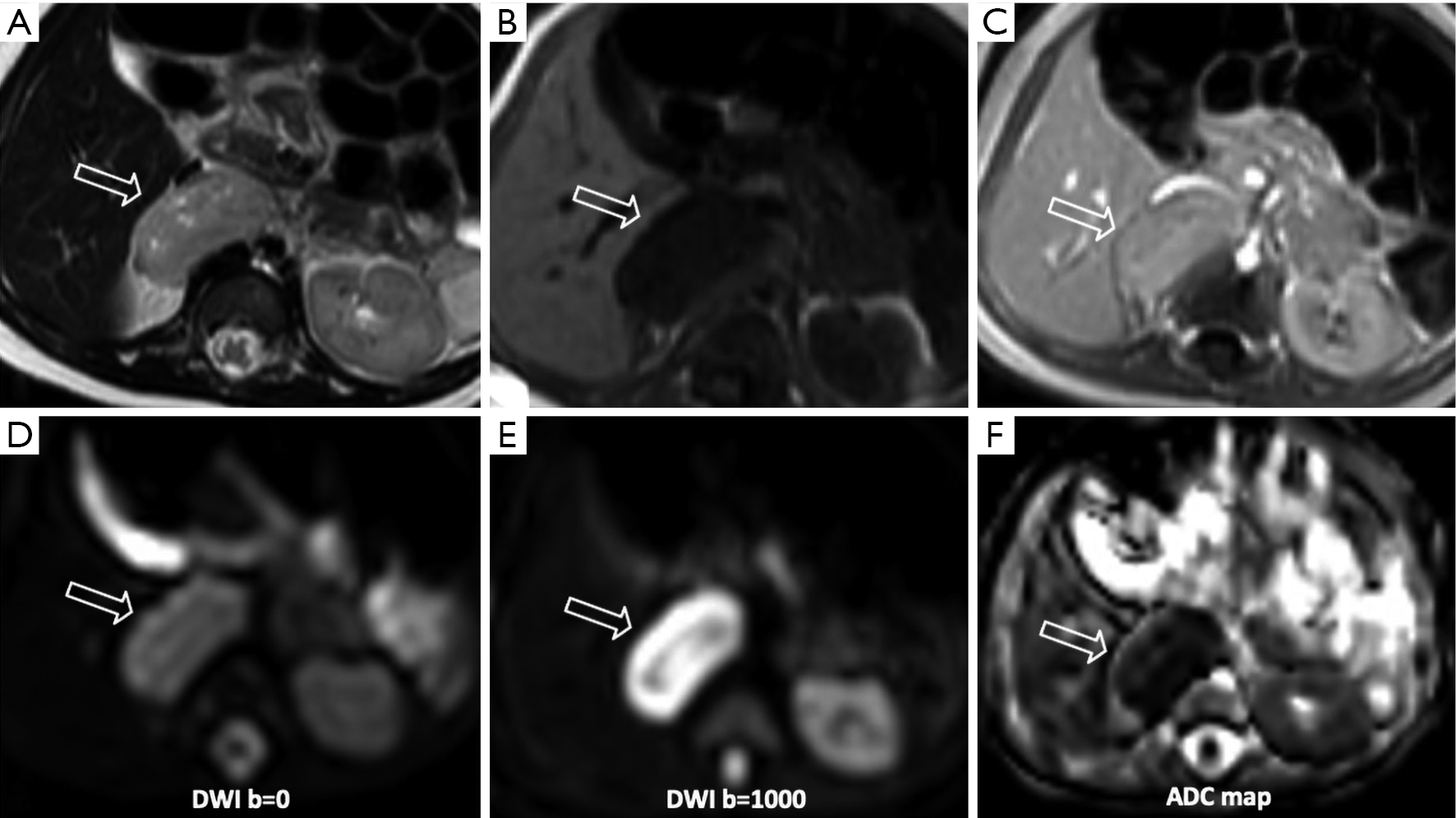 Metastases: the adrenal glands are a common site for metastatic disease (Figures 6,7), most frequently as a consequence of a primary tumor involving lungs, breast, stomach, liver and pancreas. Due to the adrenal blood supply, the most frequent metastatic involvement is hematogenous (28,29). Metastases have no specific imaging findings, usually they appear hypointense on T1-weighted images and hyperintense on T2-weighted images, with ring or irregular enhancement after contrast injection. The use of CSI is limited when metastases from primary malignancies have a lipid or fatty intracellular component, for example clear renal cell carcinoma and hepatocellular carcinoma. 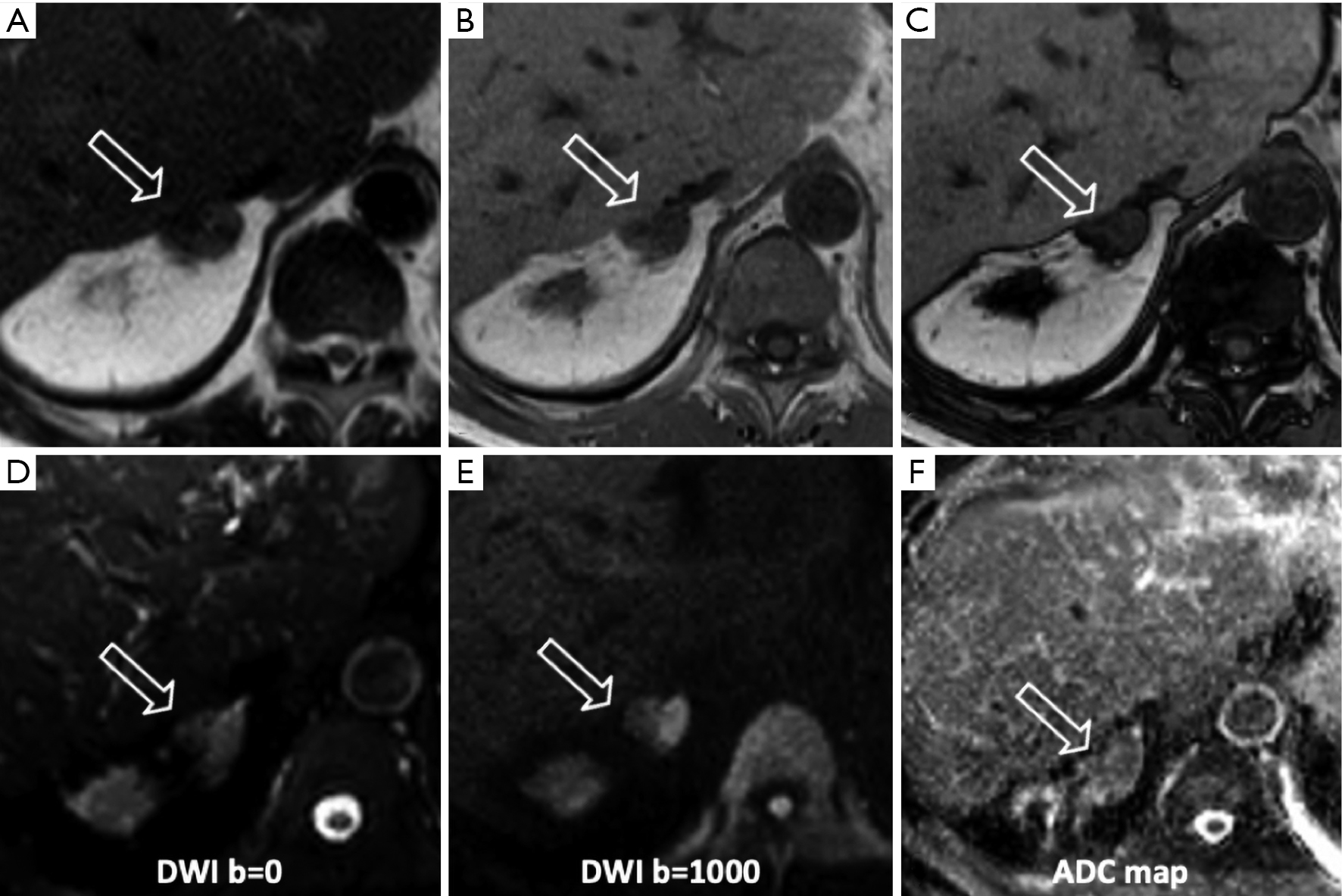 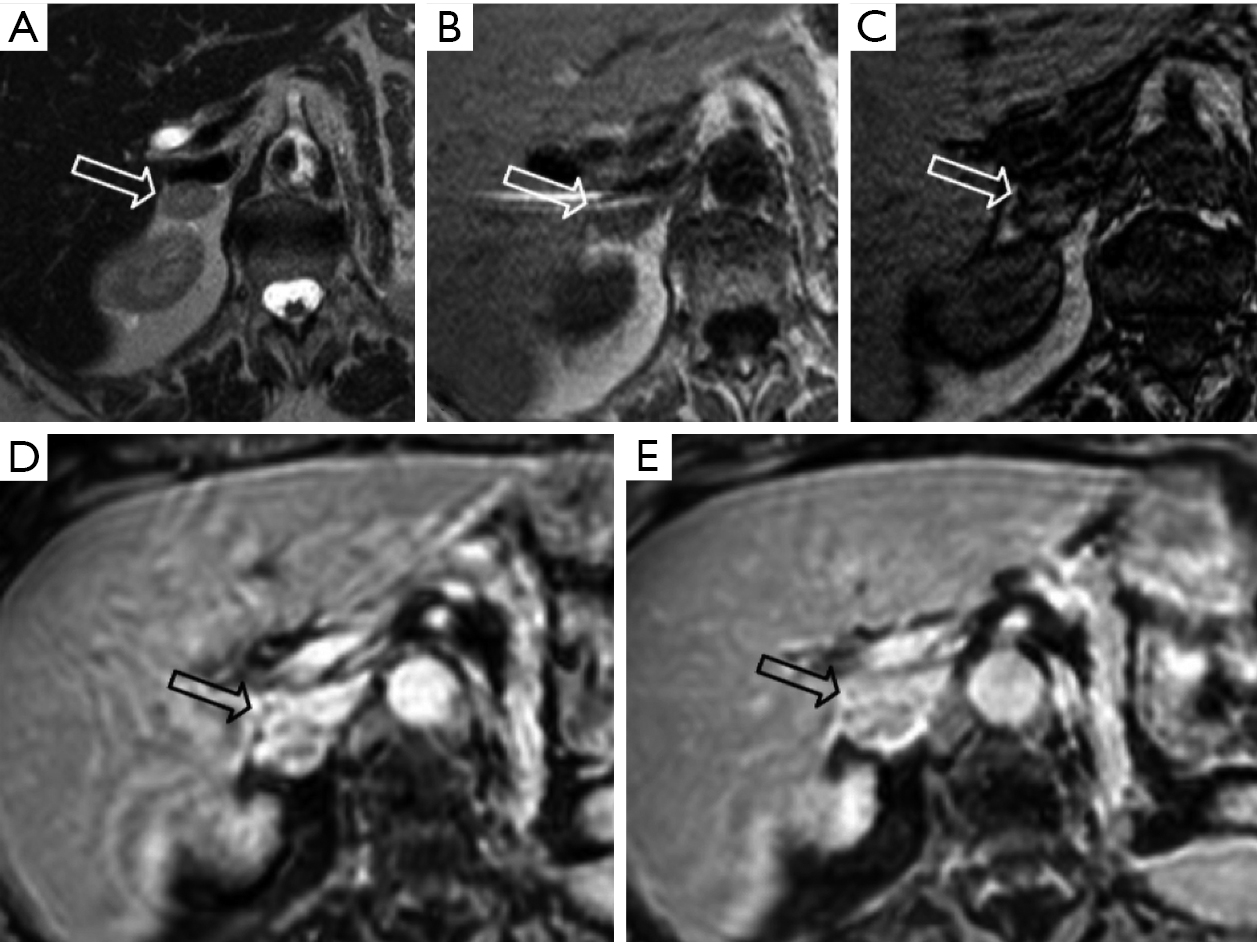 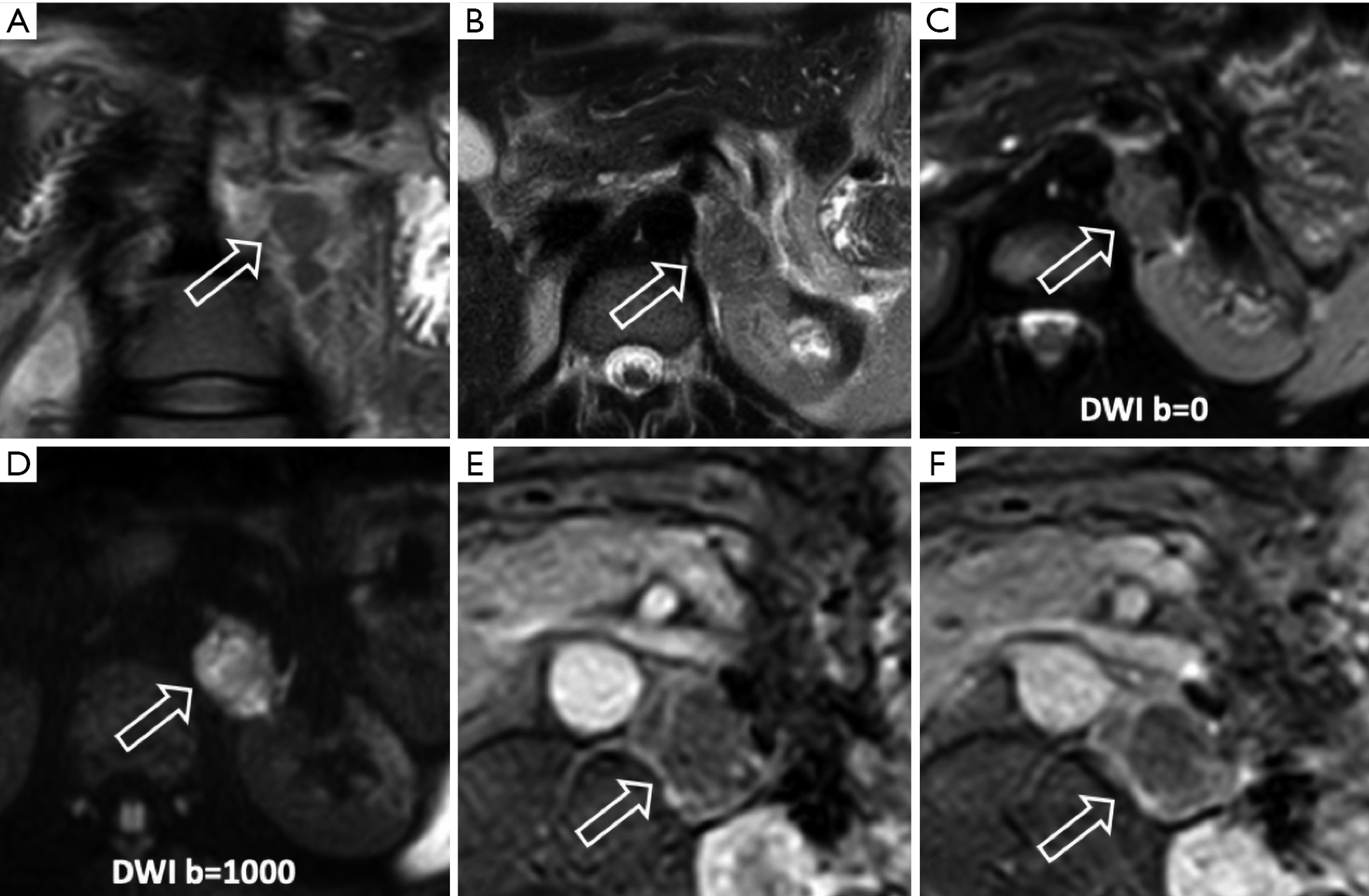 Lymphoma: the involvement of adrenal gland by lymphoma is infrequent. Primary adrenal lymphoma is extremely rare, usually confined to a single organ, otherwise it is thought to be secondary. Sometimes lymphoma can maintain the gland’s adreniform shape and mimic, in its initial stage, adrenal hypertrophy or hyperplasia. Lymphoma lesions are typically large, heterogeneous because of hemorrhagic, necrotic and cystic changes. Typical MRI features are hypointensity on T1-weighted images and hyperintensity on T2-weighted images.

Although CSI is accurate to distinguish adenomas from metastatic disease of the adrenal glands, false-positive findings of benignancy can occur in cases of metastatic disease, specially related to clear cell renal cell carcinoma and hepatocellular carcinoma (31).

The use of DWI is not yet considered a valid method to differentiate adenomas from nonadenomas because of conflicting results reported in literature.

Spectroscopy even though is a promising technique needs more studies to be validated.