Whichever reconstructive technique the patient opts for or is deemed suitable for, the mainstay of a successful reconstruction is blood supply, vascularity and perfusion of the mastectomy skin, the flap or the recipient site for the fat graft. Therefore, pre-, per- and post-operative evaluation of vascularity and perfusion is necessary to offer the patient optimal conditions throughout the entire pathway from diagnosis to final treatment and reconstruction.

ICG is a water-soluble substance, initially developed for infra-red photography, but was approved by the Federal Drug Administration in 1959 for use in humans. It is excreted via the liver into the bile, upon binding to plasma proteins. It has a very short half-life of 3–5 minutes in humans and may therefore be used repeatedly during the same surgery and even in patients with compromised renal function (1). ICG is detected with near-infrared cameras harbouring 806 nm diode-laser. In plastic and reconstructive surgery, ICG-A may also be applied for pre- and per-operative detection of the perforator in perforator flap surgery (4).

Assessment of the patency of microvascular anastomoses (5) and may add in re-explorative procedures after free flap surgery (6). In addition ICG-A may aid in determining the angiosome in pedicled and free flap procedures (7,8), perfusion of mastectomy flaps (9). Moreover, ICG-A may aid in determining the perfusion of the nipple-areola-complex (NAC) in nipple-sparing mastectomies before incision (10), thereby securing an uneventful healing of the NAC. ICG-A offers real-time imaging of vascularity and perfusion. Some of the most commonly used systems to are the Fluobeam Clinical System® (Fluoptics, Grenoble, France, www.fluoptics.com), HyperEye Medical Systems® (Mizuho, Tokyo, Japan, www.mizuhomedical.co.jp), Spy-Elite Fluorescence Imaging System/SPY Phi (Stryker AB, Malmö, Sweden, www.stryker.com), IC-View® Pulsion Medical Systems.

According to preoperative marking of the patient and induction of general anesthesia, the nipple-sparing or subcutaneous mastectomy is performed by meticulous dissection in the plane of the subcutaneous fascia, everting the skin with the left hand and retracting the breast tissue inferiorly. The plane between the subcutaneous fat and the glandular tissue is dissected to preserve the dermal blood supply. For dissection, scissors are used and to secure hemostasis bipolar diathermia is used. In the case of NSM, careful dissection below the nipple is performed, leaving a rim of 2 millimetre tissue, as this is the most delicate part of the skin flap. We do not evert and core the nipple, to minimize the increased risk of nipple ischemia. On the mastectomy specimen, the basis of the nipple is marked with a suture. Care is taken to preserve the intercostal perforators on the medial rim of the sternum, as they are pivotal in preserving the vascular supply to the skin flaps. The breast is freed off the pectoralis major muscle using monopolar diathermia. After completion of the mastectomy, the mastectomy specimen is marked for pathology, weighed and sent for histology.

If the immediate breast reconstruction is performed using implant(s), a sizer of the appropriate size is inserted. The sizer is filled with saline and with a volume corresponding to the weight of the mastectomy specimen. Subsequently the ICG-A is performed, and the perfusion scored as described previously (11-13). Consequently, a perfusion-score smaller than 33% will lead to re-evaluation of the reconstructive procedure. If the area comprising a 33% perfusion-score or less is located around the incision the area is excised and a smaller fixed sized implant or an expander is planned to be used. In the case of planned subpectoral placement of the implant/expander, the pectoralis major muscle is raised appropriately and the acellular dermal matrix is sutured in place using longer-time resorbable sutures (Monoplus 2-0, B. Braun). If a pre-pectoral position is deemed sufficient, the acellular dermal matrix is wrapped around the implant and sutured to the chest wall, using the aforementioned suture. Subsequently two drains are inserted and tunneled and fixed using non-resorbable sutures (Dafilon 3-0, B. Braun). Upon re-draping and re-sterilization of the chest area and change of glowes and instruments, the chosen silicone-gel implant or expander (containing the appropriate volume) is implanted. The skin is sutured using resorbable sutures 3-0 or 4-0 (Novosyn, B. Braun), in two layers followed by non-resorbable sutures (Dafilon 5-0, B. Braun). Then, ICG-A is performed again, and the perfusion scored to ensure the previously detected perfusion score. The suture line is bandaged with sterile paper tape (Micropore 3M™) and the breast(s) is draped with Tegaderm after application of Nitroglycerine Ointment (Nitro-Bid, Nyco-Med, Melville, NY, USA) to the mastectomy skin flaps in order to reduce the rate of skin necrosis (14). A supporting brassiere is applied.

If the reconstruction is performed with autologous tissue, the pedicled flap e.g., Latissimus Dorsi, muscle-sparing Latissimus Dorsi-flap or Thoracodorsal Artery Perforator flap is raised and transposed or advanced and tunneled into the site of the skin-sparing or nipple-sparing mastectomy. The perfusion of the flap is scored using ICG-A as described (13,15) and the part of the flap, scoring <33% is excised. An immediate breast reconstruction with autologous tissue assessed by ICG-A is visualized in the video (Figure 1). If the breast is reconstructed using a free flap ICG-A may be useful in determining the real-time perfusion and design or size of the flap (17) and may aid in selecting the perforator supplying the larger amount of the flap. The free flap is raised on its perforator(s) and arterial and venous anastomoses performed. ICG-A could then be used to assess the patency of the anastomosis (5) as well as the perfusion. Subsequently, the flap is fixed to the chest wall, where appropriate, using resorbable sutures (Novosyn 2-0, B Braun). One or two drains are inserted and tunneled, fixed with nor-resorbable sutures (Dafilon 3-0). The mastectomy skin incision is closed with a resorbable suture (Novosyn 3-0/4-0), leaving a visible part of the skin of the flap, if deemed necessary. The skin is closed using a non-resorbable suture (Dafilon 5-0, B. Braun), as a running suture or a resorbable suture (Monosyn 4-0) intracutaneously. A supporting brassiere is applied. 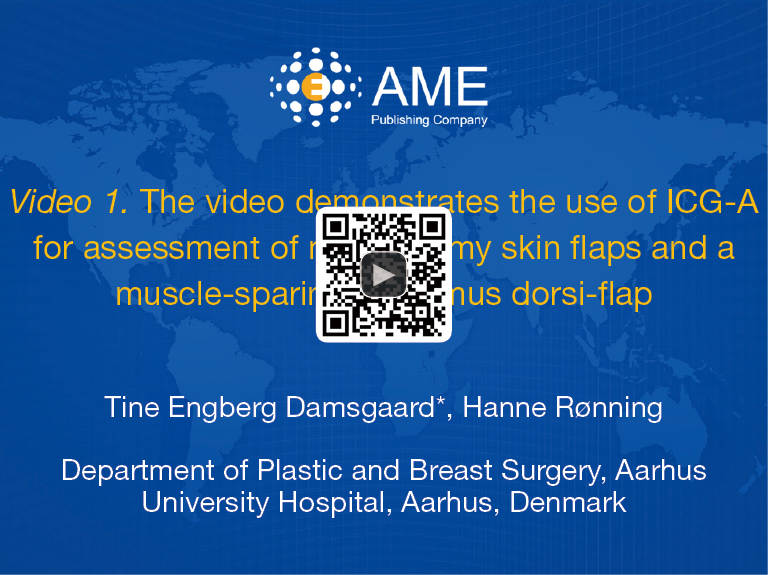 Figure 1 The video demonstrates the use of ICG-A for assessment of mastectomy skin flaps and a muscle-sparing latissimus dorsi-flap (16). ICG-A, indocyanine green-angiography. Available online: http://www.asvide.com/watch/32984

There is no doubt that the absolute prerequisite for a successful and aesthetically pleasing immediate breast reconstruction is a nipple- or skin-sparing mastectomy, leaving well-vascularized skin flaps. The per-operative assessments before and after the insertion of the flap or implant (+/− ADM/mesh) has shown to be an important precondition for an uneventful healing and thus for a successful reconstruction. The multidisciplinary team-work between the oncologic surgeon and the plastic surgeon is of pivotal importance both during surgery, but most certainly also pre- and post-operatively. The evolution towards creating integrated breast units, encompassing the necessary specialists to treat and reconstruct the breast cancer patient or breast cancer survivor at the optimal time-point within the patient pathway. In addition, an effortless, coordinated and scientifically founded multidisciplinary team-work may pave the way for treatment of late-effects after breast cancer treatment i.e., chronic pain, lymphedema and psychological side-effects.