Prosthetic breast reconstruction has until recently been exclusively performed by placing the prosthesis in a subpectoral or dual-plane position. The placement of the prosthesis in a prepectoral position is currently emerging as a simpler, alternative approach to prosthetic reconstruction. A number of studies have demonstrated the feasibility and safety of this approach (12-22). The impact of radiotherapy on prepectoral prosthetic reconstruction has currently not been defined, although premastectomy radiotherapy is generally contraindicated unless vascularized tissue is utilized in conjunction (12). It is important to define the impact of postmastectomy radiotherapy (PMRT) on the prepectoral approach in order to facilitate education and potentially improved outcomes.

If one were to evaluate the pectoralis major muscle both with and without a device beneath it, one begins to see the positive attributes of prepectoral breast reconstruction in the setting of PMRT. When the pectoralis major muscle is radiated, it becomes fibrotic and shortens. Any underlying device then naturally elevates as the muscle shortens and tightens above it. Concurrently, the inframammary fold also moves in the cephalad direction and the entire pocket contracts and moves in the direction of the muscle shortening. Conversely, a prepectoral device is unaffected by pectoralis muscle fibrosis, contracture, or shortening, and as such, in this scenario, the inframammary fold remains stable as there is no upward vector acting on the pocket. The only unwanted sequela is skin envelope tightening, which is unavoidable and largely clinically insignificant.

We have previously reported on our early experience with the prepectoral approach in primary breast reconstruction (12). In a follow-up study, outcomes of patients who underwent immediate, direct-to-implant or two-staged, prepectoral breast reconstruction followed by PMRT were reported and compared with those from patients who did not receive PMRT. The following is a summary of the study.

A retrospective analysis was performed on patients who underwent immediate, prepectoral, direct-to-implant or two-staged expander/implant breast reconstruction following skin-sparing mastectomy (SSM) or nipple-sparing mastectomy (NSM) and had PMRT. Reconstructive surgery was performed from August 2014 to May 2016 at the practices of two reconstructive surgeons (Steven Sigalove and Allen Gabriel). Patients underwent planned or unplanned radiotherapy administered after expander or implant placement. Patients who had poorly vascularized mastectomy flaps, history of prior radiation, body mass index (BMI) >40 kg/m2, poorly controlled diabetes (HbA1c >7.5%) and who were active smokers and lacked fat donor sites were not offered immediate prepectoral reconstruction. In addition, patients who had late stage cancer, large tumors (>5 cm), deep tumors, chest wall involvement, and grossly positive axillary involvement and were at high risk of recurrence were not offered immediate prepectoral reconstruction (12).

Prepectoral reconstruction was performed as previously described (12). Following mastectomy, skin flap perfusion was accessed using a Fluorescence Imaging System (SPY Elite, NOVADAQ Technologies Inc., Bonita Springs, Florida or Hamamatsu PDE, Mitaka USA Inc., Denver, Colorado). Only patients with well-perfused skin flap and without contraindications listed above were offered the prepectoral approach. An implant or expander was covered anteriorly and posteriorly with one or two sheets (16 cm × 20 cm) of thick, perforated, acellular dermal matrix (AlloDerm® Tissue Matrix Ready To Use; LifeCell Corporation, Branchburg, NJ, USA) and placed in the prepectoral pocket. The dermal matrix was sutured to the pectoralis major muscle and subcutaneous tissue superiorly and to the inframammary fold inferiorly. Typically, two drains were placed, between the matrix and the mastectomy flap and were located laterally making sure that the drains do not cross the breast meridian. The drains were removed postoperatively when output was less than 30 mL over a 24-hour period. Implant exchange was performed at 6 weeks whenever possible prior to start of radiation therapy. In patients who underwent radiotherapy after expander placement, tissue expansion was typically completed before delivery of radiotherapy. In patients who had air-filled expanders, the air was replaced with saline prior to radiotherapy. In patients who required additional soft tissue coverage, autologous fat grafting was performed at the second stage. However, if patients had undergone capsulotomy during the second stage or were going to have radiotherapy after implant placement, fat grafting was delayed and performed at a later stage.

Patient records were reviewed and the following data were obtained: age at surgery; BMI; history of tobacco use, hypertension, and diabetes mellitus; type of mastectomy (NSM or SSM); laterality of mastectomy (unilateral or bilateral); timing of postoperative radiation (after expander or implant placement); and type and incidence of complications after each stage of reconstruction. Complications obtained included seroma, hematoma, infection, wound dehiscence, skin necrosis, expander/implant exposure or removal, and capsular contracture. Capsular contracture was graded based on the Spear-Baker classification (23). Clinically significant contracture was defined as grade III/IV contracture.

Thirty-three patients met our inclusion criteria and formed the analytic cohort of the study (Table 1). Fifty-two breasts were reconstructed using the prepectoral approach. Patients’ age at the time of surgery ranged from 23 to 75 years, with a mean of 50.6 years. Almost 40% of patients had comorbid conditions; in particular, 36.4% were obese with a BMI ≥30 kg/m2. Nineteen patients had bilateral and 14 unilateral mastectomies. Ninety-four point two percent of the mastectomies were skin sparing, the remaining were nipple sparing. Nineteen breasts underwent direct-to-implant reconstruction and 33 expander/implant reconstruction. Sixty-five point four percent of the breasts were irradiated, including 21% after expander and 44% after implant placement. Patients were followed for a mean of 25.1±6.4 months (range, 15.5 to 37.3 months) after implant placement. 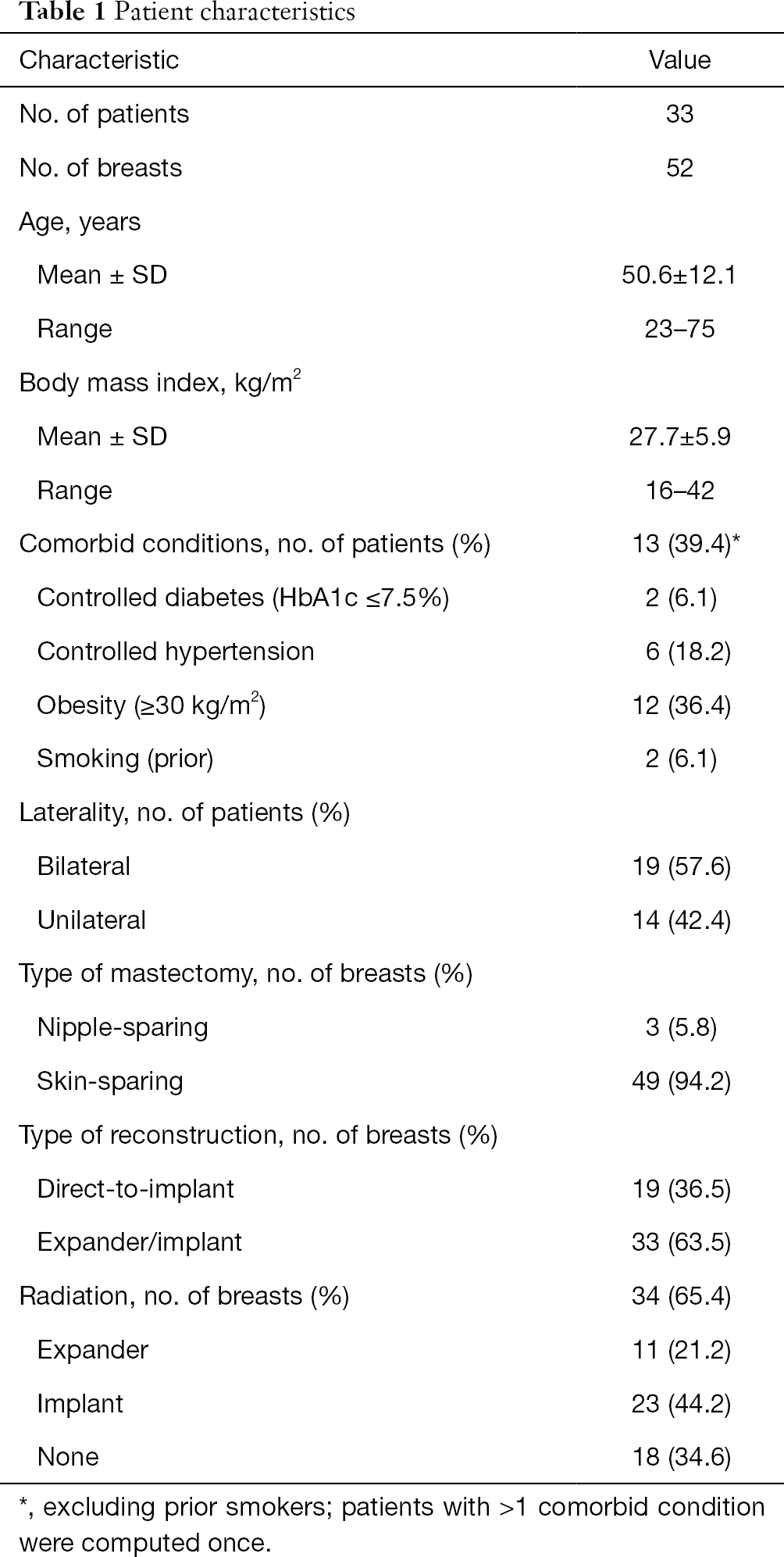 In patients who underwent two-staged reconstruction, at the second stage, on visual inspection, the acellular dermal matrix was noted to be completely integrated in all breasts, including those that had been irradiated after expander placement. Postoperative complications in irradiated breasts were limited to two breasts (Table 2). In one breast, there was one incidence of wound dehiscence after expander irradiation, which led to expander removal and salvage with transverse rectus abdominis musculocutaneous (TRAM) flap reconstruction. In the second breast, there was one incidence of seroma after implant irradiation, which was managed conservatively as an outpatient. The seroma was drained and the patient treated with oral antibiotics. There were no complications in nonirradiated breasts. There was no incidence of clinically significant capsular contracture (grade III/IV) in irradiated or nonirradiated breasts. Representative patient cases are shown in Figures 1,2. 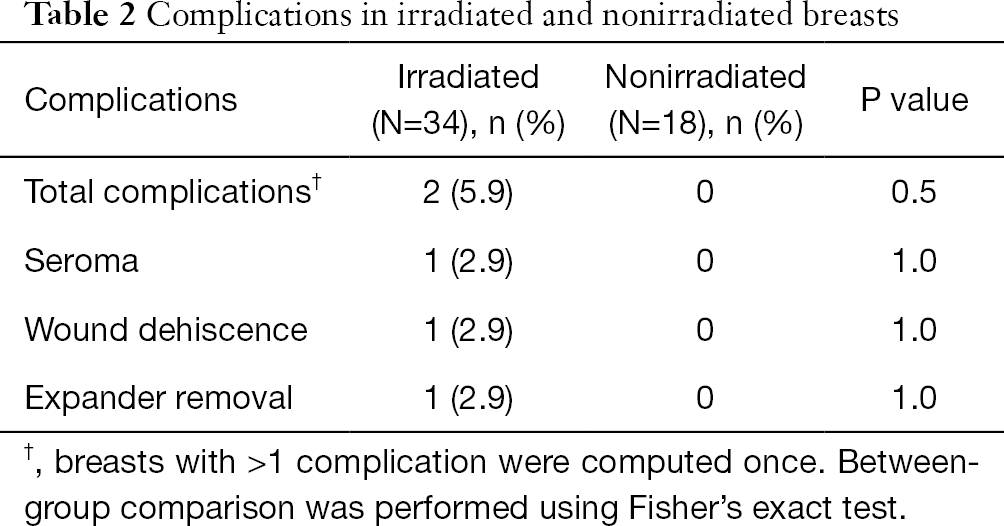 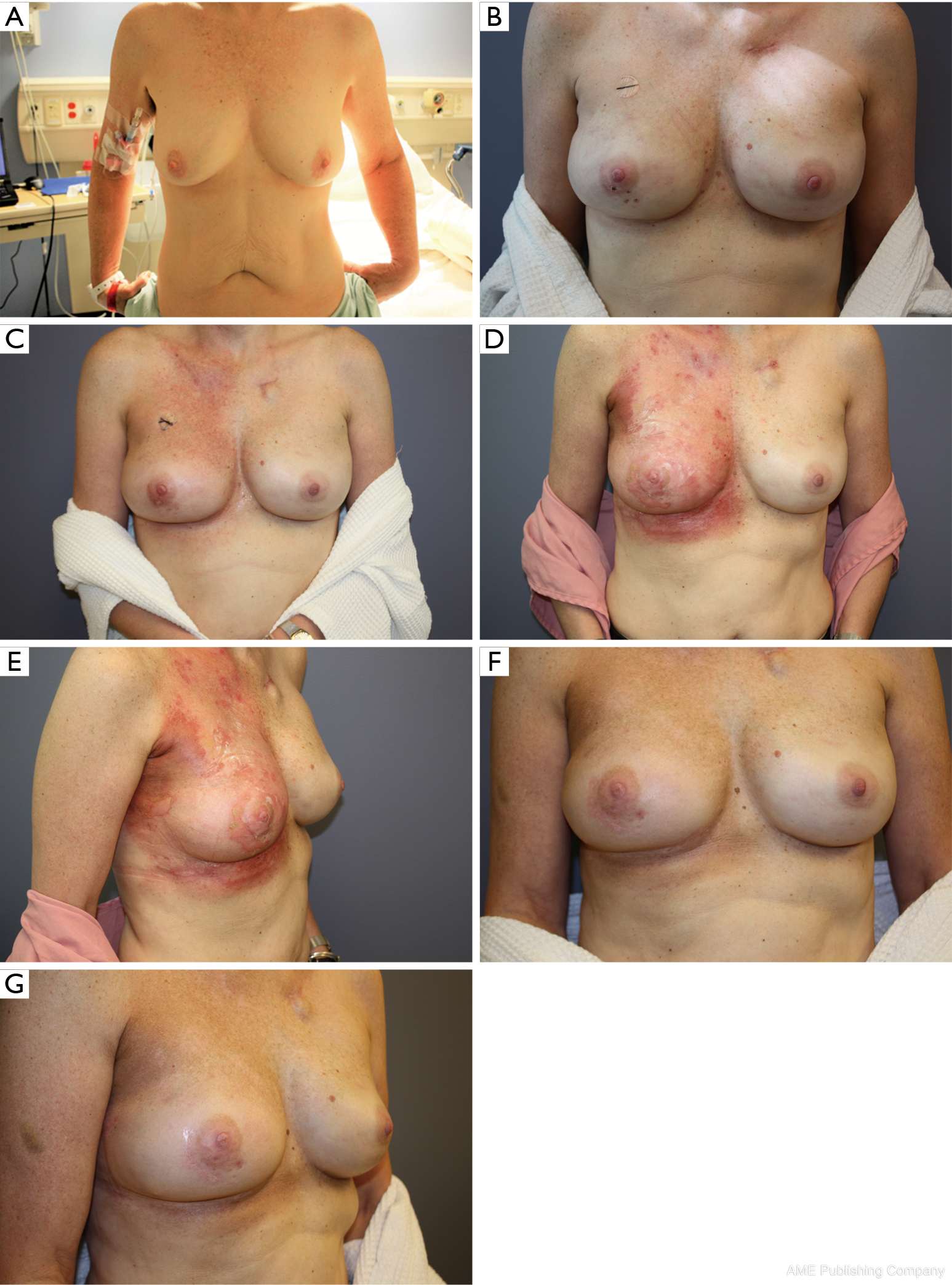 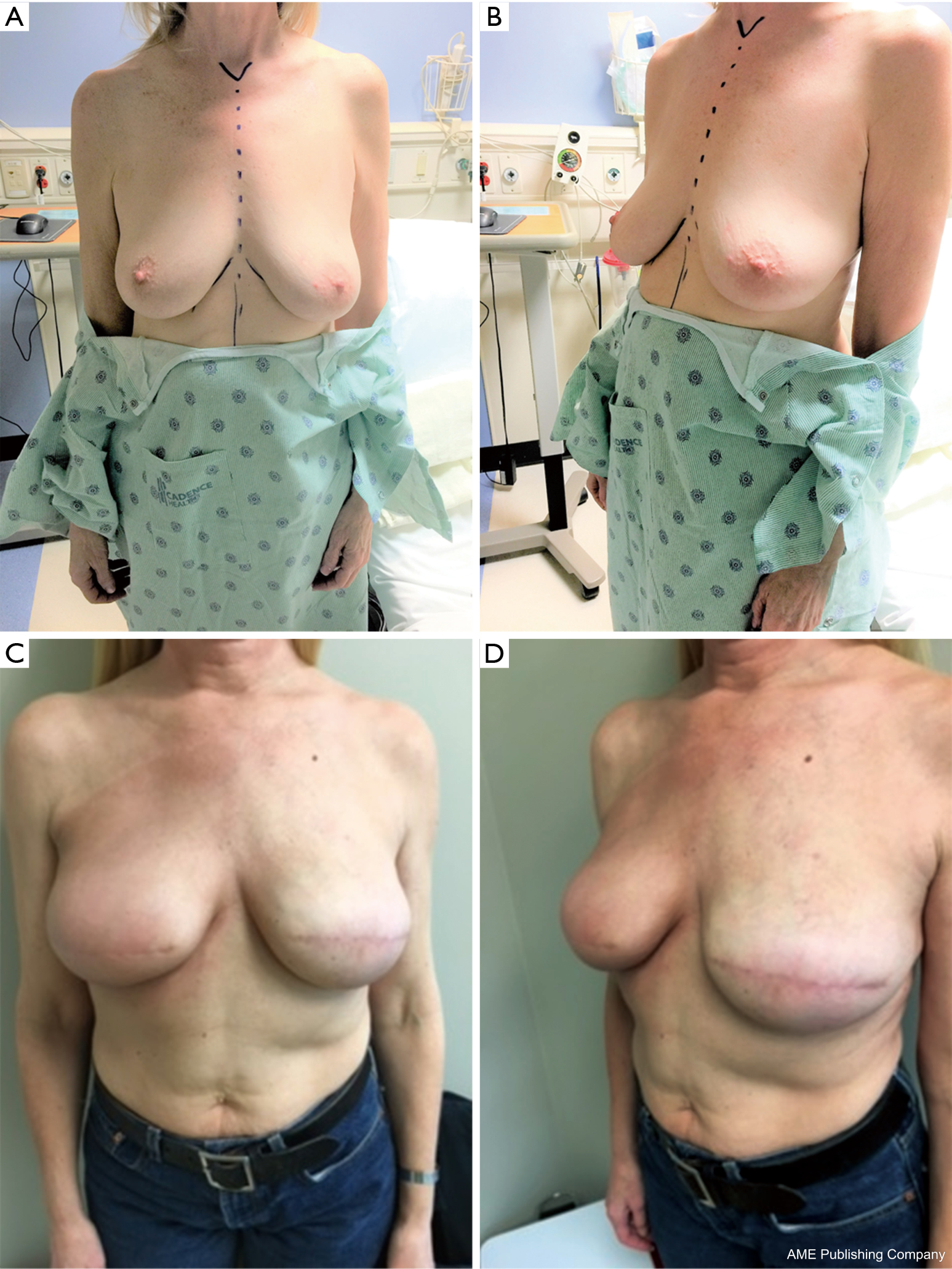 Radiation is the most significant risk factor for major complications in prosthetic reconstruction (7). Radiation-induced injury is noticeable within days to weeks on breast skin and tissue as edema, inflammation, and desquamation. These acute effects may lead to complications such as incisional dehiscence, infection, delayed healing, seroma, and hematoma after breast reconstruction (24). Over time, radiation causes progressive fibrosis of the skin and underlying muscles resulting in dermal thickening and muscle fibrosis with atrophy. These delayed effects of radiation may lead to complications such as capsular contracture and implant malposition after reconstructive surgery (10,11,25).

The impact of premastectomy radiation and PMRT on subpectoral implant-based reconstruction has been extensively studied and documented (10,11,25). Given that prepectoral breast reconstruction is a relatively new technique, there is a paucity of data in the setting of radiotherapy. Hence, this study was undertaken to document the outcomes of patients who received PMRT following prepectoral implant-based breast reconstruction. The results suggest that prepectoral reconstruction in the setting of PMRT appears to be well tolerated with a low complication rate that included a major surgery rate of 2.9%, a reconstructive failure rate of 2.9%, and a clinically significant capsular contracture rate of 0%. Reconstructions were successfully completed in 97% of irradiated breasts. Although there were no complications in nonirradiated breasts, the difference in the rate of complications between the irradiated and nonirradiated groups was statistically nonsignificant. Despite the fact that this is a small study of 34 irradiated reconstructions with a mean duration of follow-up of approximately 25 months, the low rate of complications following PMRT is favorable. In comparison, in a study by Spear et al. of 56 acellular-dermis assisted, two-stage subpectoral reconstructions with a median duration of follow-up of 15 months, PMRT was associated with a reconstructive failure rate of 21% and a capsular contracture (grade III/IV) rate of 61% (4).

Such favorable outcomes in prepectoral breast reconstruction can potentially be rationalized in a study by Cheng et al. (27). In this study, the authors described a novel technique to treat and prevent recurrent capsular contracture, which entailed using acellular dermal matrix to completely cover the implant anteriorly. Of 16 breasts treated, none developed recurrent capsular contracture over an average follow-up of 9.2 months (range, 2.4 to 18.8 months). Clinically, it is now well recognized that acellular dermal matrix mitigates capsular contracture, even if it partially covers the implant (28-30). Histopathological studies suggest that acellular dermal matrix diminishes the inflammatory and profibrotic signaling characteristics of breast capsule development leading to capsules that are thinner than native breast capsules (31-33). But in the setting of PMRT, the benefit of acellular dermal matrix appears to be diminished as reported in the Spear et al. study (4). This leads to the speculation that perhaps complete prosthesis coverage with acellular dermal matrix and sparing the pectorals major may provide greater protection against the adverse effects of radiotherapy than partial coverage. Sparing the pectoralis major minimizes and eliminates the cephalad pull of the muscle, permitting the implant to remain in its preradiation location. The skin reaction to radiation, however, is not eliminated in the prepectoral approach, which leads to dermal fibrosis and thickening of the skin envelope. Fat grafting in this setting may play an important role in improving the overall skin envelope over time. Both hypotheses may be worth pursuing in future studies so as to improve prosthetic reconstruction outcomes with PMRT.

Technique principles are also important for successful outcomes in the setting of PMRT. The delivery of PMRT after complete tissue healing and recovery from the surgical intervention helps in minimizing the risk of wound dehiscence and skin necrosis. Incisional dehiscence may be minimized via an inframammary incision, which is the preferred incision in all two-stage reconstructions. When expander irradiation is planned, tissue expansion is completed before irradiation. Fat grafting is usually necessary in irradiated breasts to improve overall aesthetics. and is performed after tissue healing, typically 3–6 months after PMRT, although the authors are considering earlier fat grafting. As irradiation progressively compromises tissue perfusion, early fat grafting allows the capitalization of perfused tissue for graft retention and regeneration. The regenerative environment created by the incorporated fat cells may also benefit the host tissue during the early healing phase post irradiation. There is some evidence that earlier fat grafting may mitigate postoperative complications. In a study of 16 patients, Ribuffo et al. reported fat grafting 6 weeks after expander irradiation prevented ulceration and implant exposure (34).

Immediate implant-based prepectoral breast reconstruction followed by PMRT appears to be well tolerated, with no excess risk of adverse outcomes, at least in the short term. By not having a fibrotic and shortening pectoralis major muscle to contract on an elevating expander or implant, the pocket remains stable with cephalad vectors acting upon it. The inframammary fold remains stable, and the incidence of capsular contracture is minimal. Longer follow-up is needed to better understand the risk of PMRT in prepectorally reconstructed breasts. For patients who have been radiated in the past, care should be exercised when considering prepectoral implant-based reconstruction without a concurrent vascularized muscle flap. Should prepectoral breast reconstruction be carried out in the absence of a vascularized muscle flap (i.e., Latissimus Dorsi) the surgeon should have a definitive discussion with the patient outlining the high risks of seromas, incisional dehiscence, infection, necrosis, and reconstructive failure necessitating autologous salvage.

Ethical Statement: This study was approved by PeaceHealth Institutional Review Board, Vancouver, Washington (No. 554349).