The use of acellular dermal matrix in breast reconstruction: evolution of techniques over 2 decades

Acellular dermal matrices (ADMs) are human-, bovine-, or porcine-derived biotechnologically engineered tissues that have served a myriad of purposes across surgical subspecialties. Tissue processing removes the cellular antigens capable of producing an immunologic response while maintaining the structural matrix that encourages angiogenesis and tissue regeneration. The initial reported clinical use of ADMs was in the management of full-thickness burns in 1995 (1), and they subsequently have had a number of applications within plastic and reconstructive surgery, including in abdominal hernia repair (2), rhinoplasty (3), facial soft tissue augmentation (4,5), lip augmentation (6), and oculofacial procedures (7).

After the first usage in the breast by the senior author in 2001, ADMs have become a cornerstone of implant-based immediate breast reconstruction over the last 2 decades. Immediate breast reconstruction became preferred to delayed reconstruction in the 1990’s (8) due to its improved psychosocial morbidity (9,10), decreased cost (11), and optimal cosmetic outcomes facilitated by the advent of skin-sparing mastectomies (12). Prior to the use of ADMs, effective immediate prosthesis-based breast reconstruction necessitated the use of a submuscular expander with full muscle coverage to improve soft tissue coverage prior to a permanent implant placement or removal of the filling port attached to a combination device (13). The disadvantages of this approach include infectious complications requiring multiple operations (14) and patient discomfort (15).

In addition to the transition from delayed to immediate breast reconstruction, the location of implant placement also greatly evolved toward the end of the 20th century from a fully submuscular approach to partial muscular coverage of the implant, also known as the dual-plane subpectoral approach. While the latter approach shortened operative time and facilitated better expansion of the lower pole, this required “marionette” sutures to the inframammary fold (IMF) for definition of the IMF and lateral mammary fold (LMF) (16,17). Furthermore, the lack of implant support allowed for implant migration, malposition, and exposure due to the absence of lower pole support and inadequate inferolateral soft tissue coverage (18).

ADMs were initially used to decrease the visible rippling of breast implants in patients with thin soft tissue coverage. Then in 2001, the senior author pioneered the use of ADMs as soft tissue coverage and structural support for prosthetic-based immediate breast reconstruction (19). The technique used involves the creation of the subpectoral pocket followed by inferomedial elevation and precise division of the pectoralis major muscle from the inferior margin. The ADM is then sutured to the inferior pectoralis major muscle extending to the LMF with no elevation of the serratus anterior muscle. The implant is then inserted beneath the pectoralis-ADM layer, and the ADM is sutured to the IMF to completely cover and secure the implant with a hand-in-glove fit. Subcutaneous and subpectoral suction drains are then placed followed by skin closure (20). Outcomes for this approach have been reported for up to 8–13 years postoperatively, and include good cosmetic results (Figure 1) with a low incidence of capsular contracture (0.4%) and low overall complication rate (3.9–8.6%), which is comparable to the published complication rates for two-stage breast reconstruction. Complications included skin necrosis, infection, implant loss, seroma, and hematoma (21,22). The development of complications was predicted by older age, smoking, non-nipple sparing mastectomy, and larger implant size (21). 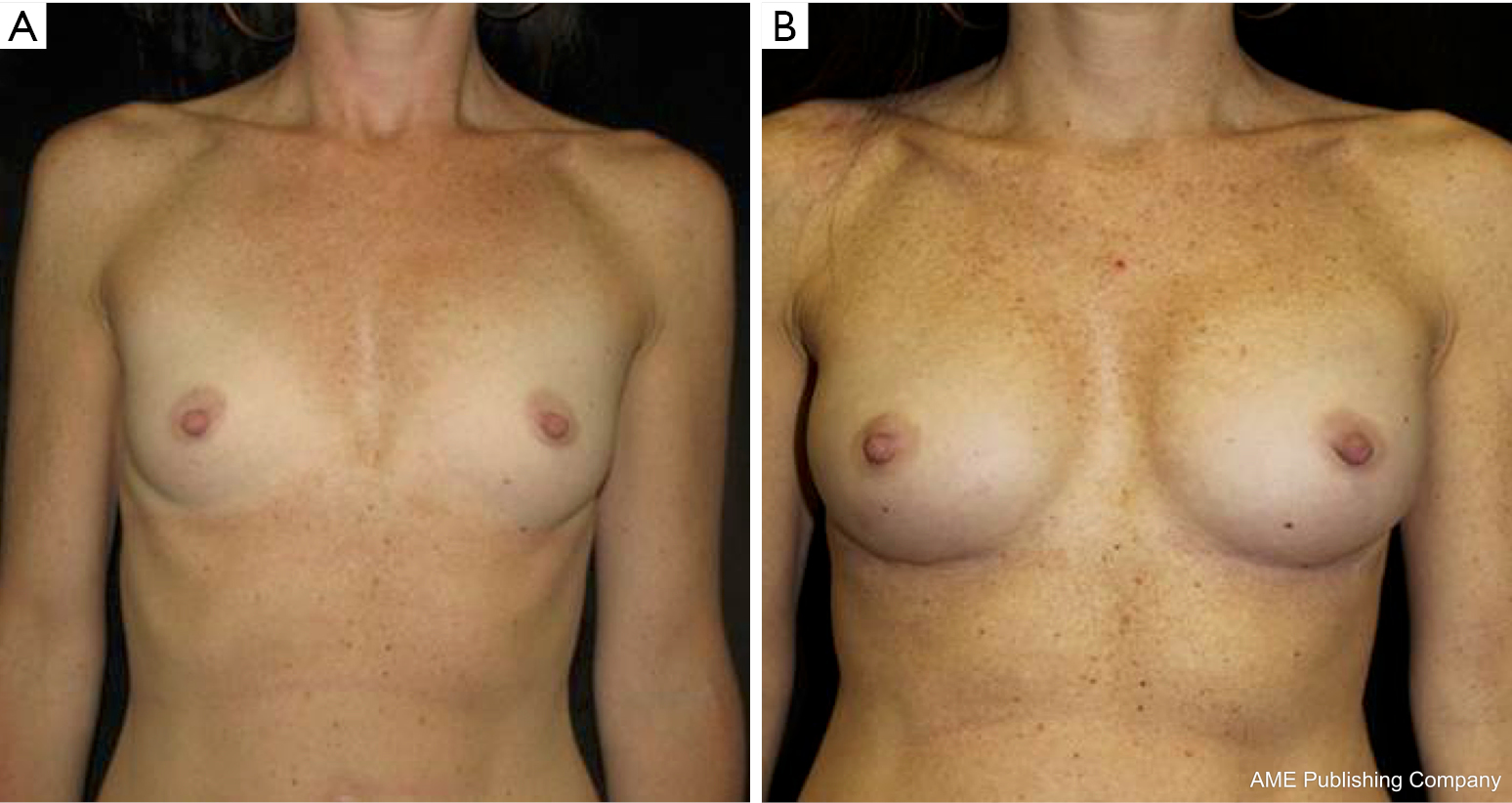 Topol et al. [2008] further expanded the dual-plane approach by using ADMs in immediate implant-based reconstruction in conjunction with lower chest advancement flaps and IMF reconstructions in order to decrease the risk of a vertically lifted breast and enhance symmetry in unilateral breast reconstruction. IMF reconstruction with or without LMF reconstruction was done prior to pectoralis muscle elevation. A sheet of extra thick ADM was subsequently sutured to the inferior breast skin flap 1 cm above the IMF extending to the underside of the lateral skin at or just above the LMF. The implant was then seated against the IMF and the inferior aspect of the pectoralis major muscle was sutured to the superior aspect of the ADM (31).

Breuing and Colwell [2007], who termed the technique “The AlloDerm hammock,” broadened the use of the partial subpectoral approach to include delayed reconstruction, reconstruction for congenital breast aplasia, and expander-implant reconstruction (32). Chepla et al. [2012] then introduced the “partial AlloDerm sling” with the aim of possibly providing adequate expander support while reducing costs associated with ADM use. The authors employed this technique in all patients with a caudal insertion of the pectoralis major muscle <1 cm from IMF. In these patients, instead of releasing the pectoralis from the point of its medial origin to create the partial submuscular expander pocket, the aspects of the pectoralis muscle lying medially and inferiorly at the IMF were left intact. The smallest size of ADM possible was then used to cover the exposed lateral aspect of the submuscular pocket. Using this technique, the authors were able to use less than 64 cm2 of ADM in 20% of the reconstructed breasts included in this study, which is 20 cm2 less than the reported average use of ADM per breast in the literature (33). Hadad et al. [2015] used a similar ADM-sparing technique with ADM use limited to the lateral aspect of the subpectoral pocket. They achieved good aesthetic results with a decrease in seroma, infection, and rate of reconstruction loss as compared to their non-ADM sparing technique (34).

Maxwell and Gabriel [2016] created an integrated approach termed the “bioengineered breast concept,” which described the use of ADMs in two-stage breast reconstruction for support of shaped textured form-stable implants, followed by later fat grafting for enhanced implant coverage. First, an expander is placed subpectorally with ADM used for inferior coverage. During the second stage of reconstruction when the permanent implant is substituted for the expander, a capsulotomy is performed and ADM is sutured at the upper pole of the breast pocket subpectorally followed by overlying subcutaneous autologous fat grafting in patients with inadequate soft tissue thickness or low body mass index (BMI) (35).

While cosmetic outcomes of the ADM-assisted dual-plane subpectoral approach have generally been quite good with limited postoperative complications, the risk of postoperative pain and animation deformity with pectoralis contraction or spasm remains a potential consequence that can significantly affect quality of life (36,37). This disadvantage of the dual-plane subpectoral approach has fueled the search for a less invasive method of reconstruction, leading many to return to the prepectoral approach once popularized in the 1970’s (38,39). At that time, this involved placement of an implant or expander in the prepectoral subcutaneous space, which previously resulted in a high risk of infection, hematoma, capsular contracture, implant malpositioning, and implant extrusion (40-42). In contrast to that initial approach, the recent movement to return to prepectoral breast reconstruction involves the use of ADMs to provide implant support and soft tissue coverage in order to avoid the complications that were experienced.

While some surgeons began returning to the prepectoral approach as a revisionary operation to correct animation deformity (43), others began to use the approach in primary reconstructive operations. Reitsamer and Peintinger [2015] described porcine ADM use with shaped silicone gel-filled implants in primary prepectoral breast reconstruction following nipple-sparing mastectomy by employing a technique that involved extracorporeal suturing, trimming, and incisions of two sheets of ADM in order to create a fitted ADM envelope with angular ADM flaps that could be used to secure the implant in the prepectoral space (44). Additional reported techniques have involved suturing the anteriorly placed ADM to the periphery of the implant pocket, while other techniques involve partially or completely wrapping the implant with ADM secured with sutures either circumferentially, in a centromedial pattern on the posterior surface of the implant, or in a manufacture designed pattern prior to implant placement (45-51). Others have created a compound implant pocket made with an inferior dermal flap that is attached at its superior border to ADM, which then serves to cover the remainder of the implant (52). Furthermore, ADM has been used as anterior augmentation and inferolateral support of a Vicryl mesh implant pocket in patients at a high risk of implant rippling or those likely to undergo subsequent fat grafting (53,54).

Furthermore, the bioengineered breast concept that had previously been reported in two-stage partial subpectoral breast reconstruction was applied to a prepectoral approach, which similar to its initial application, involved the use of ADM to support a cohesive gel implant with later overlying autologous fat grafting. As is noted with most prepectoral reconstructions, this approach necessitates the presence of a well-vascularized skin flap due to its proximity to the implant, and as such, is contraindicated in patients with prior breast irradiation and active smoking. Contraindications to this approach also include patients with advanced malignancy, proximal tumors, and high risk of cancer recurrence (56).

Sbitany et al. [2017] compared the dual-plane submuscular approach to the prepectoral approach in expander-based breast reconstruction following nipple-sparing mastectomy and found that while the latter approach decreased expander migration in patients undergoing post-mastectomy radiation therapy, there were no other significant differences in rates of major complications. Patients were chosen by the primary author to undergo the prepectoral approach based on clinical considerations including viability of mastectomy skin flap, size and ptosis of the breast skin envelope, and oncologic setting. The surgical technique involves first suturing the ADM anterior to the pectoralis major muscle 3 cm above the planned IMF. The ADM is then brought down to the inferior pole where it is folded back up at the IMF and subsequently sutured in place to the chest wall to create an ADM cuff that provides further expander support. The expander is then placed and the ADM is pulled up and sutured in place at its medial, superior, and lateral borders such that it covers the anterior aspect of the expander. After a mean follow-up time of approximately 1-year, the author reported good aesthetic outcomes with no significant differences in complication rates, aside from that mentioned above, in those patients who underwent the prepectoral approach as compared to those who underwent the dual-plane approach (57).

However, despite encouraging early outcomes of the prepectoral approach, some cite the expense of ADM use as a limitation to the prepectoral approach, where a substantial amount of material is used to allow for adequate implant coverage (58). Others argue that long-term economic benefits may lie in superior outcomes that include fewer secondary operations, decreased capsular contracture, and decreased narcotic use secondary to improved postoperative pain (47,58). Nevertheless in order to avoid this concern, some have sought to decrease ADM use through the use of shaped and fenestrated ADMs for anterior coverage of prepectoral implants, which are made as parallel rows of staggered longitudinal cuts that are perpendicular to a posteroanterior line originating at the chest wall (59). This approach allows the sheet to expand, thus potentially decrease the amount of ADM used, with preliminary results showing comparable complication rates to others performing ADM-assisted prepectoral reconstruction (60).

The opinion of the senior author of this paper concludes that are many ways to achieve an excellent outcome and immediate breast reconstruction. The options of implant-based reconstruction have been evaluated and the type of reconstruction should be chosen for each patient individually (Figure 2). The retropectoral ADM approach is excellent for most patients but in those patients who are very active with her pectoralis muscle, professional athletes, or those who have a great desire for shaped implants a prepectoral approach makes sense. The prepectoral approach seems to necessitate a secondary procedure with subcutaneous fat grafting and many patients would like a one-stage approach. Animation deformity occurs in many patients in which it is not bothersome but in others it is very difficult and switching from the sub-pectoral to the subcutaneous position has been done on many occasions with full ADM coverage. 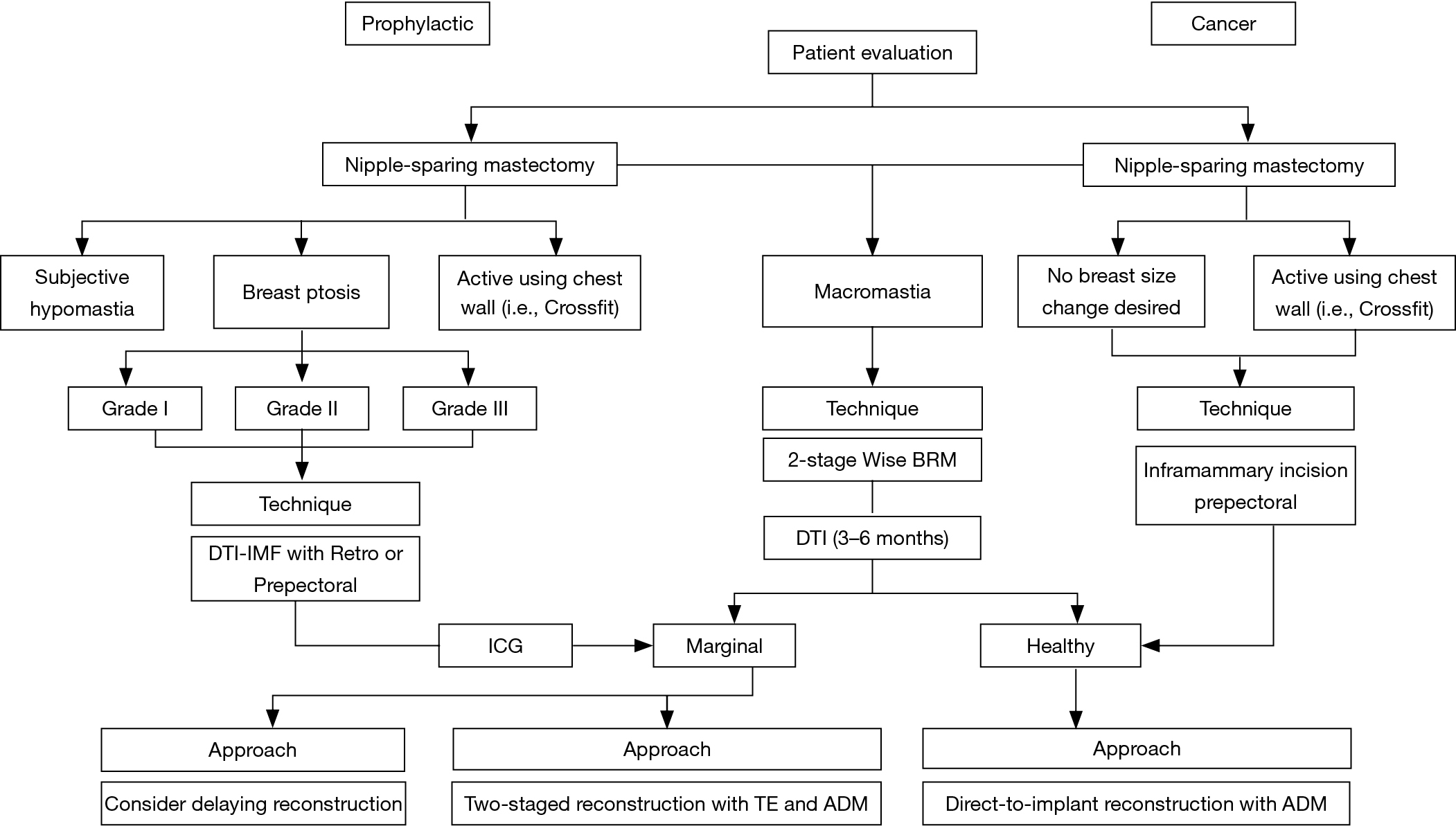 There is obvious rippling and wrinkling in many patients who have thin upper pole skin with the prepectoral approach (Figure 3), which influences the choices given to the patient on which approach would best be suited for them individually. 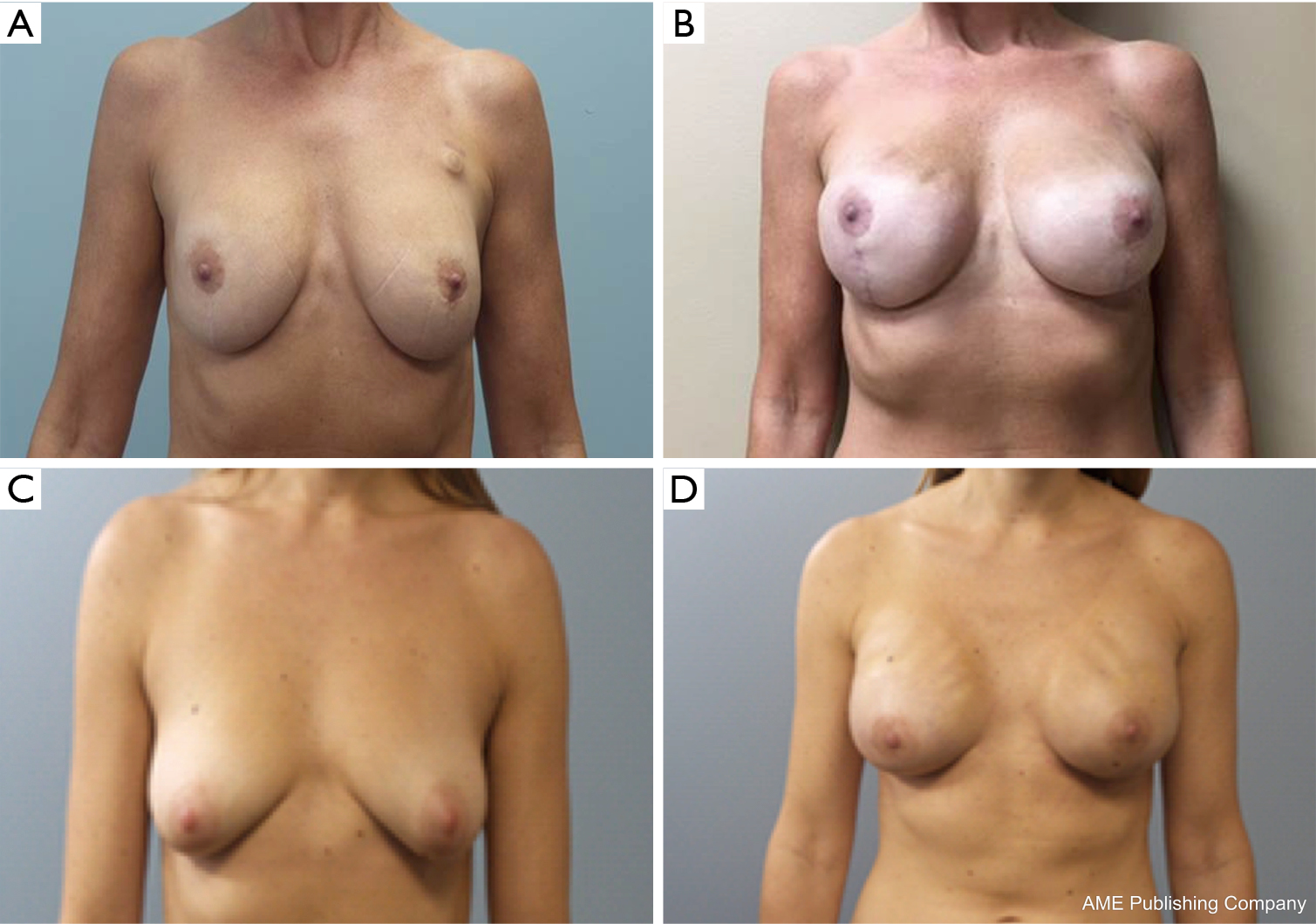