Prosthetic breast reconstruction continues to remain the primary type of reconstruction offered to women following mastectomy. The reasons for this include relative simplicity, ease of technique, and rapid recovery relative to autologous reconstruction. In addition, aesthetic outcomes range from good to excellent in the majority of patients with low and acceptable complication rates. Prosthetic reconstruction can be performed in one or two stages, with approximately 80% of patients and surgeons opting for the two-stage approach in which a partially filled tissue expander is placed first followed a few months later by exchanging the tissue expander for a permanent implant (1). The benefits of this approach include the ability to offload pressure on the skin flaps following mastectomy and the opportunity to select the ideal permanent implant following the expansion phase. The two-stage approach is advocated as more predictable, reproducible, and resulting in fewer unplanned operations due to size change and malposition.

The past decade has been a time for many innovations and advancements with prosthetic reconstruction that include nipple sparing mastectomy, autologous fat grafting, the use of acellular dermal matrix (ADM), and better prosthetic devices (2-7). From a historical perspective, the majority of prosthetic devices have been placed in the dual plane position where the upper portion of the device is under the pectoralis major and the lower portion of the device is under the lower mastectomy skin flap, but separated from it with ADM. This has been successful in many patients; however, one of the limitations of the dual plane or partial muscle coverage technique is the animation deformity that occurs with pectoralis major muscle contraction as well as muscle spasm that have been demonstrated to occur in approximately 80% of patients (8). As an alternative to partial or total subpectoral placement, the option of prepectoral placement of prosthetic devices has come to fruition (9-19). The benefits of prepectoral placement include elimination of animation deformity, elimination of muscle spasm, and optimal positioning of the device on the chest wall in accordance with the medial border of the mastectomy, rather than the medial origin/border of the pectoralis major muscle (8,19,20).

This manuscript will review the authors approach in terms of patient selection, surgical technique and review outcomes with 2-stage prepectoral breast reconstruction following mastectomy. It will be based on published manuscripts focused on comparative analyses between prepectoral and partial subpectoral prosthetic reconstruction.

Patient selection is an important factor when considering prosthetic breast reconstruction and especially with prepectoral reconstruction (4,21-24). In general, patients should be in good general health without significant co-morbidities. In patients with diabetes mellitus, optimization of blood glucose and HbA1c is essential in order to reduce the incidence of delayed healing and incisional dehiscence. The use of tobacco products is prohibited for 1-month prior to and following mastectomy to reduce the incidence of delayed healing and mastectomy skin flap necrosis that may lead to reconstructive failure. Patients that have had prior breast conservation with radiation therapy should be informed that adverse events and reconstructive failure could also be more likely (25).

When considering prepectoral, two-stage prosthetic reconstruction, patient expectations must be adequately assessed and understood (21). It is important to discuss why the two-stage approach is beneficial for the previously mentioned reasons. Some surgeons and patients will consider direct to implant reconstruction, especially with the advent of nipple sparing mastectomy; however, there are several caveats to this approach. First, not all patients are candidates for nipple sparing and in some patients, skin and nipple resection is necessary; thus, increasing the need for tissue expansion. Direct to implant reconstruction can be considered in women with small to moderate breast volume that typically ranges in cup size from A to C. However, as breast size increases to D or larger, direct-to-implant reconstruction has been demonstrated to result in a higher revision rate (26).

Device selection is based on the principles of bio-dimensional planning and includes the preoperative assessment of the base diameter of the breast as well as other relevant measurements to assess breast symmetry such as the transverse distance between sternum to nipple and the vertical distance form sternal notch to nipple (5-7). If possible, an estimation of breast volume, soft tissue compliance, breast ptosis, and body habitus will be useful. Tissue expander options will depend upon the manufacturers that make these devices and surgeons preference. The authors’ preference is to use tabbed tissue expanders to precisely secure the device to the chest wall and to minimize the risk of displacement or malposition (30).

There are several options for two-stage prepectoral reconstruction that include the use of ADM or not. Most surgeons will use an ADM for reasons that include soft tissue support for the mastectomy skin flaps, compartmentalization of the prosthetic device, lessening the inflammatory response associated with prosthetic devices and reducing the incidence of capsular contracture (31,32). However, some surgeons feel that ADM use is unnecessary in all cases, so there is some degree of controversy in this regard (15). This manuscript will focus of prepectoral 2-stage tissue expanders using ADM because this is the authors’ technique based on currently available evidence. There are on-label and off-label techniques for the use of ADM that will be reviewed. Figures 1-8 illustrate a patient following bilateral skin sparing mastectomy with immediate reconstruction using tissue expanders and implants placed in the prepectoral position. 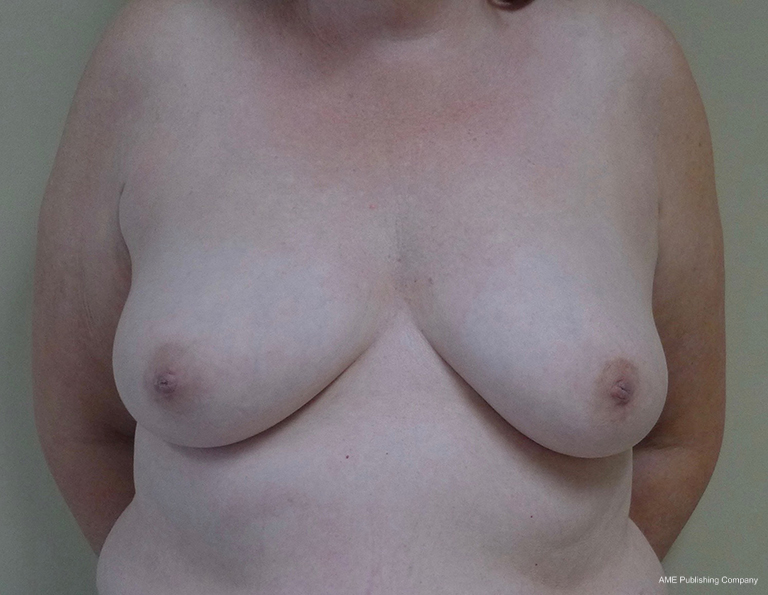 Figure 1 Preoperative photograph of a patient prior to skin sparing mastectomy. 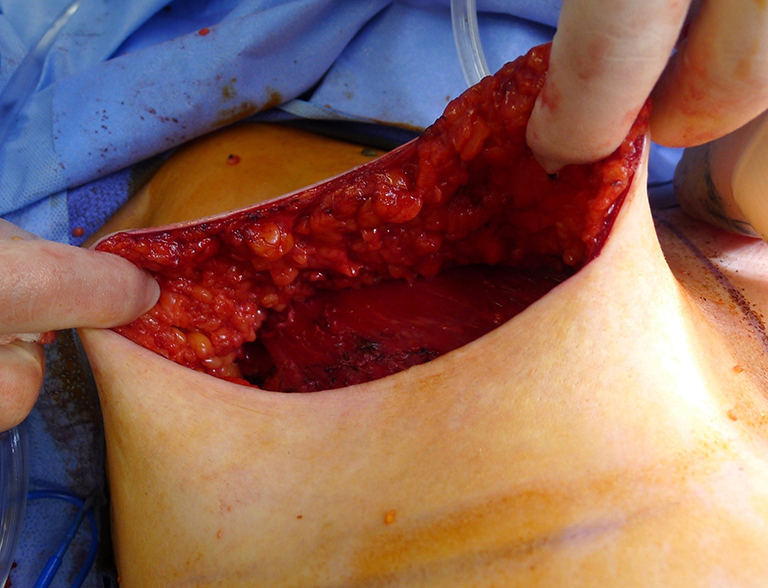 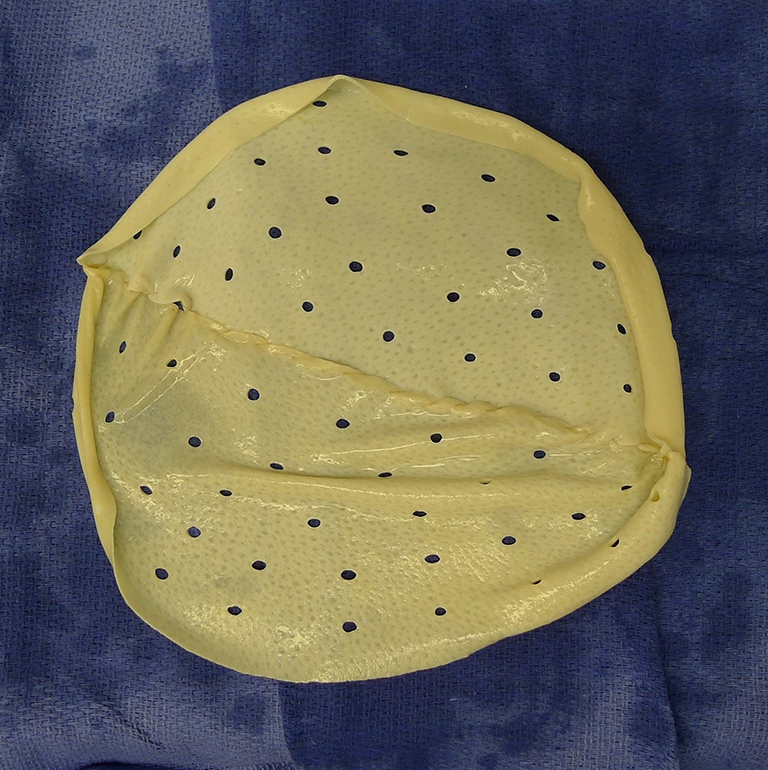 Figure 3 Two contoured perforated sheets of acellular dermal matrix are sutured together along the short axis to create the construct. 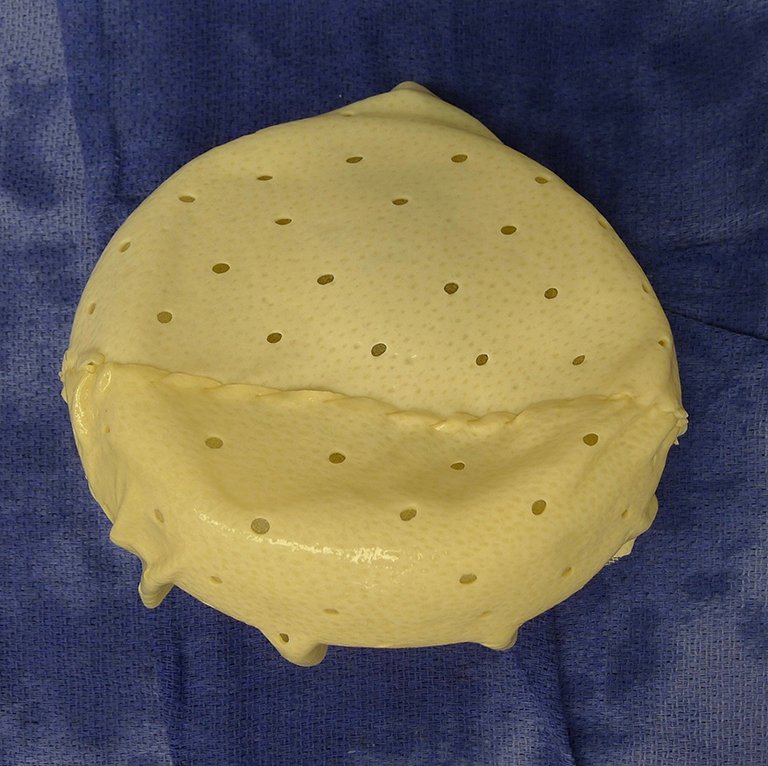 Figure 4 The off-label technique is illustrated in which the ADM is wrapped around the tissue expander prior to insertion into the breast. ADM, acellular dermal matrix. 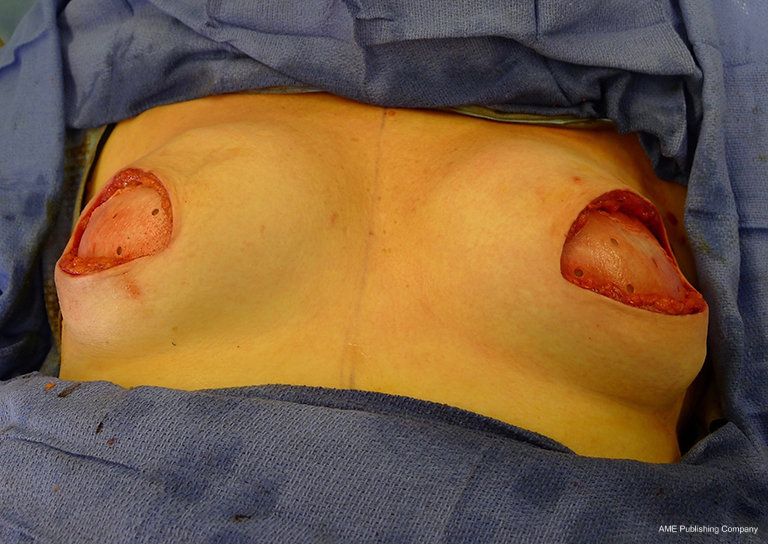 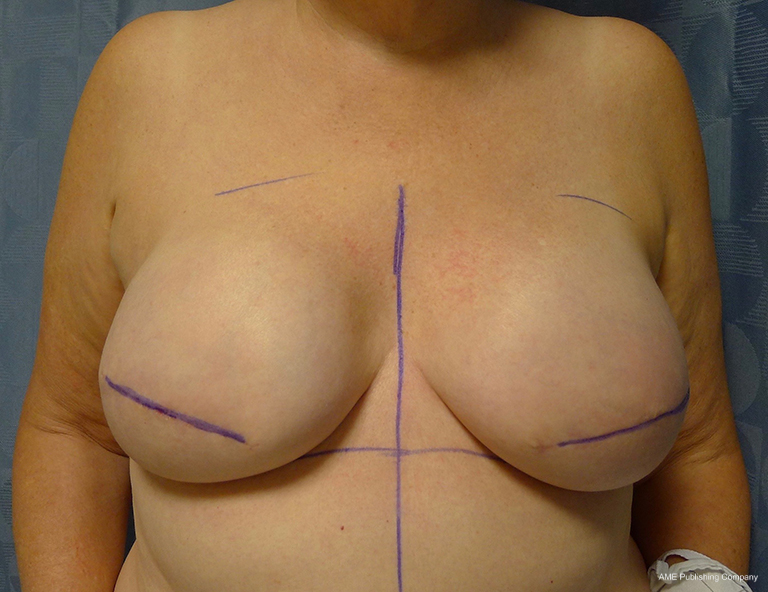 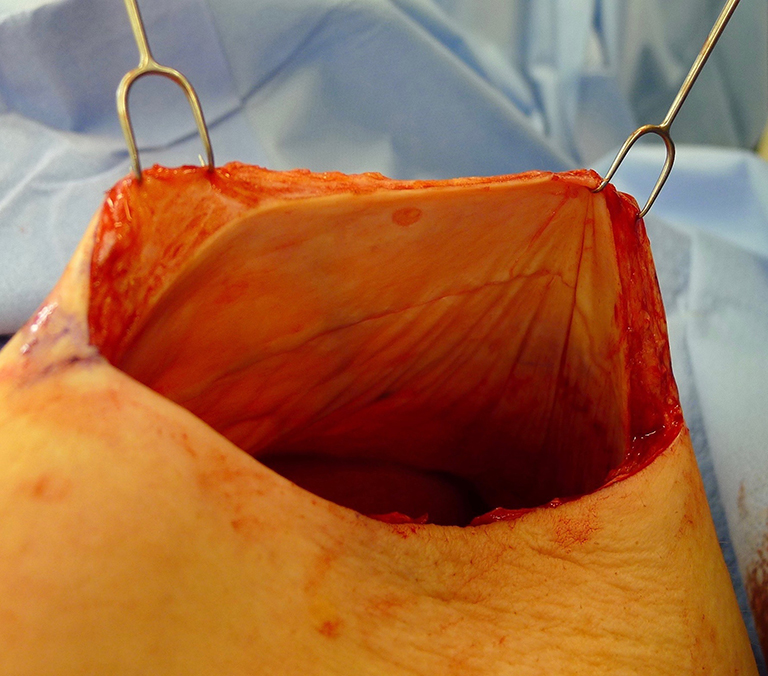 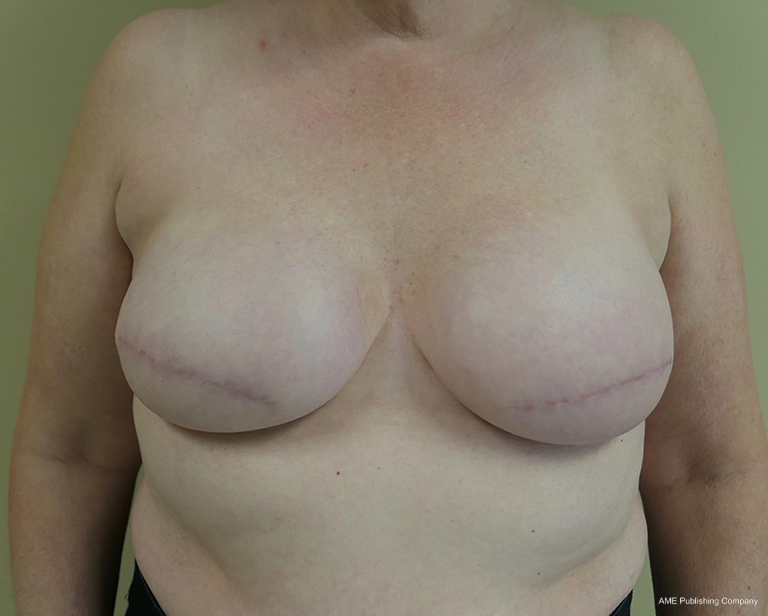 ADM can be used to provide anterior cover only, anterior and partially posterior or complete anterior and posterior coverage of the device (33). As such, the size of ADM used will vary between surgeons. Options for ADM include a 16×20 sheet or two rectangular or contoured sheets sewn together to make a larger sheet. Perforations or fenestrations in the ADM are highly recommended to promote adherence of the ADM to the mastectomy skin as well as to allow the early movement of fluid so that the risk of a seroma between the ADM and the mastectomy skin flap is minimized.

The on-label use of ADM for prepectoral reconstruction is based on using the ADM to provide soft tissue support to the mastectomy skin flaps without wrapping the ADM around the device. This technique will be reviewed in a step-by-step basis.

Two-stage prepectoral reconstruction using a tissue expander followed by an implant confers several advantages compared to one stage. By performing the reconstruction in two stages the surgeon can optimize permanent implant selection by selecting a device that will ideally fit the periprosthetic space and meet the patients expectation. This is especially important with prepectoral reconstruction because a hand-in-glove fit is critical to ensure that the implant does not shift or flip. Another advantage of the two-stage approach is that by placing a partially filled tissue expander versus a prefilled permanent implant, the surgeon can offload pressure on the mastectomy skin flaps and reduce the risk of mastectomy skin flap necrosis. By maintaining a low volume and weight initially, the gravitation effect of the device during the early phases of wound healing will be less and may result in less device malposition and displacement.

An important consideration and point of controversy is whether prepectoral implant reconstruction should be performed with the use of an ADM or not. The issue is primarily focused on the cost of the material, not its performance, because the role and benefit of ADM with prepectoral reconstruction is amplified. The ADM provides tissue support for the mastectomy skin flaps and it also compartmentalizes the device to maintain its position on the chest wall. It is important to remember that following mastectomy, all of the retaining ligaments of the breast (coopers ligaments) are removed. Implants placed in a purely subcutaneous pocket will have no support other that what is provided by the skin flaps and the ensuing capsule that forms. The ADM will serve as a hammock for the tissue expander and the implant and maintain the position of the device over time. This has been noted in the authors’ personal experience with 3-year follow-up to date (unpublished data). In addition, the ADM tends to reduce the inflammatory response associated with wound healing and the use of a foreign body such as a breast tissue expander or implant (32,34). The benefits of ADM in reducing capsular contracture with devices placed in the subpectoral position have been well documented (31). Studies of prepectoral placement of devices without ADM have demonstrated higher rates of capsular contracture (15,35) compared to when ADM is used (18,36).

The topic of capsular contracture associated with prosthetic devices deserves discussion. The classic definition of capsular contracture is based on the appearance of the breast with class 1 being normal, class 2 being firm without visible distortion, class 3 being firm and distorted, and class 4 being all of the above including pain (37). This can occur when devices are placed in the prepectoral or subpectoral positions. It is well known that radiation therapy will increase the rate of capsular contracture, especially when devices are placed in the partial subpectoral plane (38). The reason for this is that when the inferior origin of the pectoralis major muscle has been divided, one of the effects of the radiation is to cause muscle retraction and fibrosis resulting in the upward displacement of the implant due to the pull of the muscle. Interestingly, this effect is eliminated with prepectoral placement of devices because the inferior origin of the muscle is not divided; therefore, muscle retraction does not occur and cephalad displacement of the expander or implant does not occur (39). Figures 9-11 illustrate the preoperative, early postoperative prior to radiation, and later postoperative following radiation appearance of a patient to illustrate the point. The other effect of radiation is to cause skin tightening/fibrosis and loss of elasticity resulting in a breast that usually does not descend over time. Based on these observations, prepectoral placement of tissue expanders is now preferred when radiation therapy is planned. 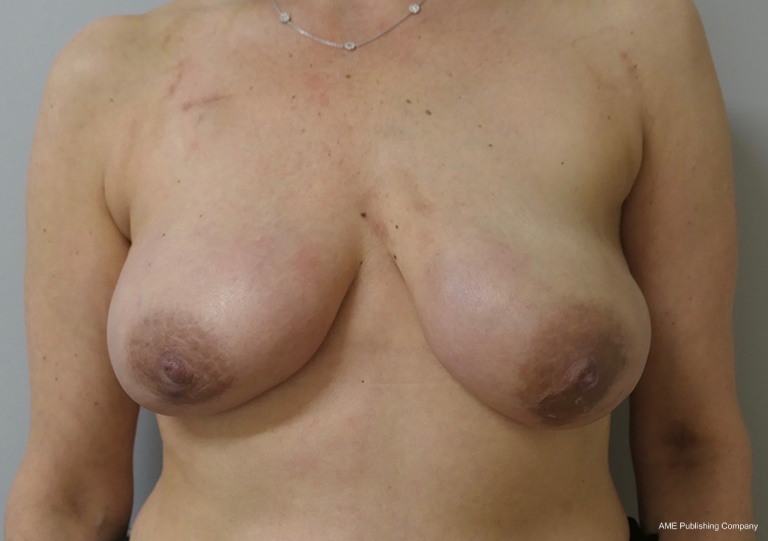 Figure 9 Preoperative photograph of a patient prior to bilateral nipple sparing mastectomy. 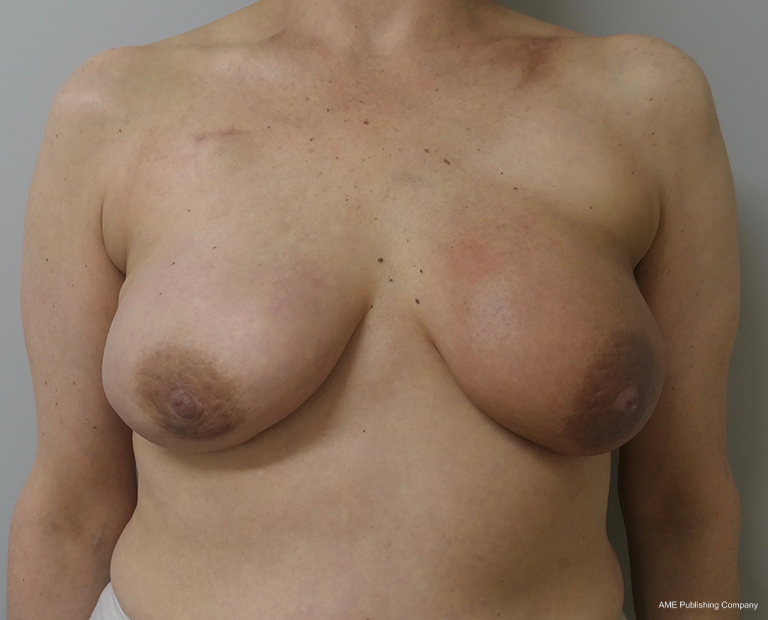 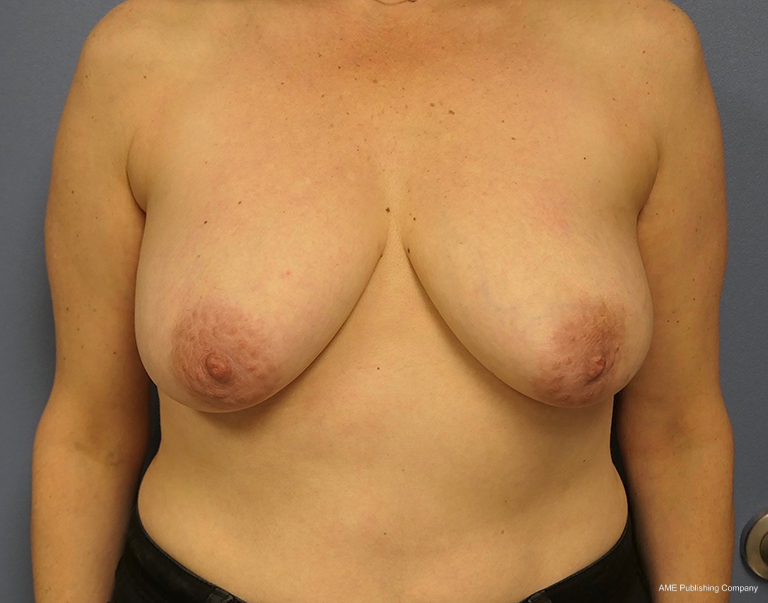 Figure 11 Postoperative photograph following left breast radiation therapy Note that the position of the tissue expander has not changed.

Informed Consent: All patients have signed a consent for using photographs and images for education purposes.