Nipple sparing mastectomy (NSM) and skin sparing mastectomy (SSM) have traditionally been avoided due to the inherent ischemia generated by the procedure and the resulting complications of skin and nipple loss. The standard of care has evolved to removal of the nipple-areolar complex (NAC) and the “at risk” skin and placement of a tissue expander in the subpectoral position. The advantages of this approach include the removal of potentially at risk tissues, a “delay” effect from gradual expansion and the avoidance of immediate pressure on the skin from a final implant placement. New technology and the experience of surgical pioneers have made it reasonable to reconsider NSM and immediate reconstruction of the breast with a final implant or tissue flap. This has been made possible by advances in our understanding of the vascularity of mastectomy flaps and technical improvements that unload pressure on the mastectomy skin, such as acellular dermal matrix (ADM) support of the implant. With unsurpassed reconstructive outcomes and high patient satisfaction, the procedure is positioned to become the new standard of care when oncologic considerations allow it.

The fundamental reason for early complications following NSM and SSM has been inadequate tissue perfusion in the mastectomy skin flaps (1-6). It follows then that reliable and accurate intraoperative evaluation of tissue perfusion would be helpful to limit complications and improve clinical outcomes. Clinical judgment is the most widely practiced method for flap evaluation (7), but by itself has not been completely reliable for perfusion assessment (8,9). Studies have shown that clinical assessment alone can be a poor predictor of postoperative complications (8-10). This can be further confounded by patient comorbidities, drugs, and previous treatments (Table 1). Ultimately, it is the variation in anatomic location of perforating vessels that supply the breast skin and the variation in the performance of mastectomy by breast surgeons that make NSM with immediate reconstruction a clinical challenge for so many. Any method to identify tissue at risk for necrosis would be a game changer for breast reconstructive surgeons. Many technologies to assess flap vascularity have been used clinically. Although some have been subjected to study, none have achieved universal acceptance (Table 2) (6,20). 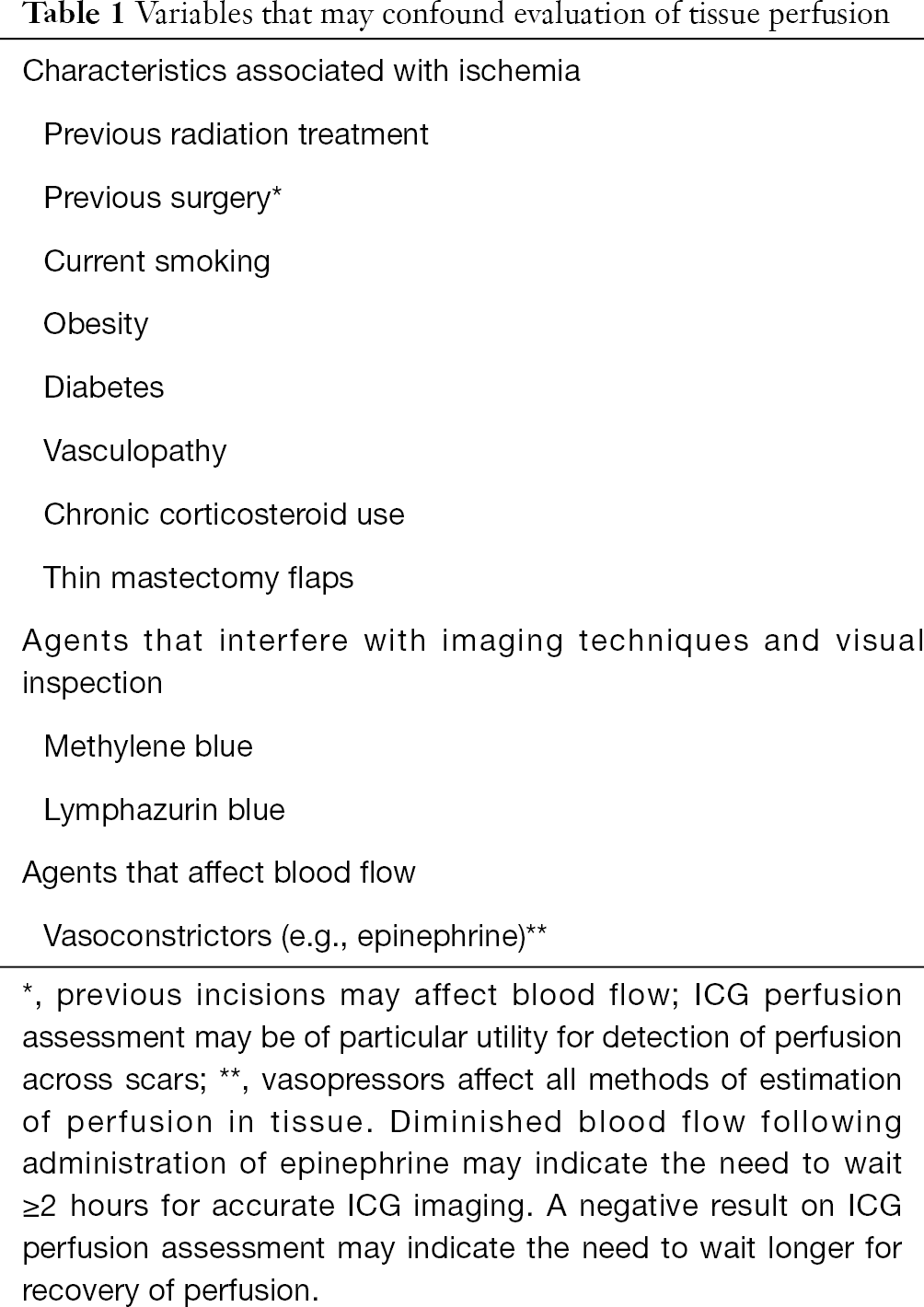 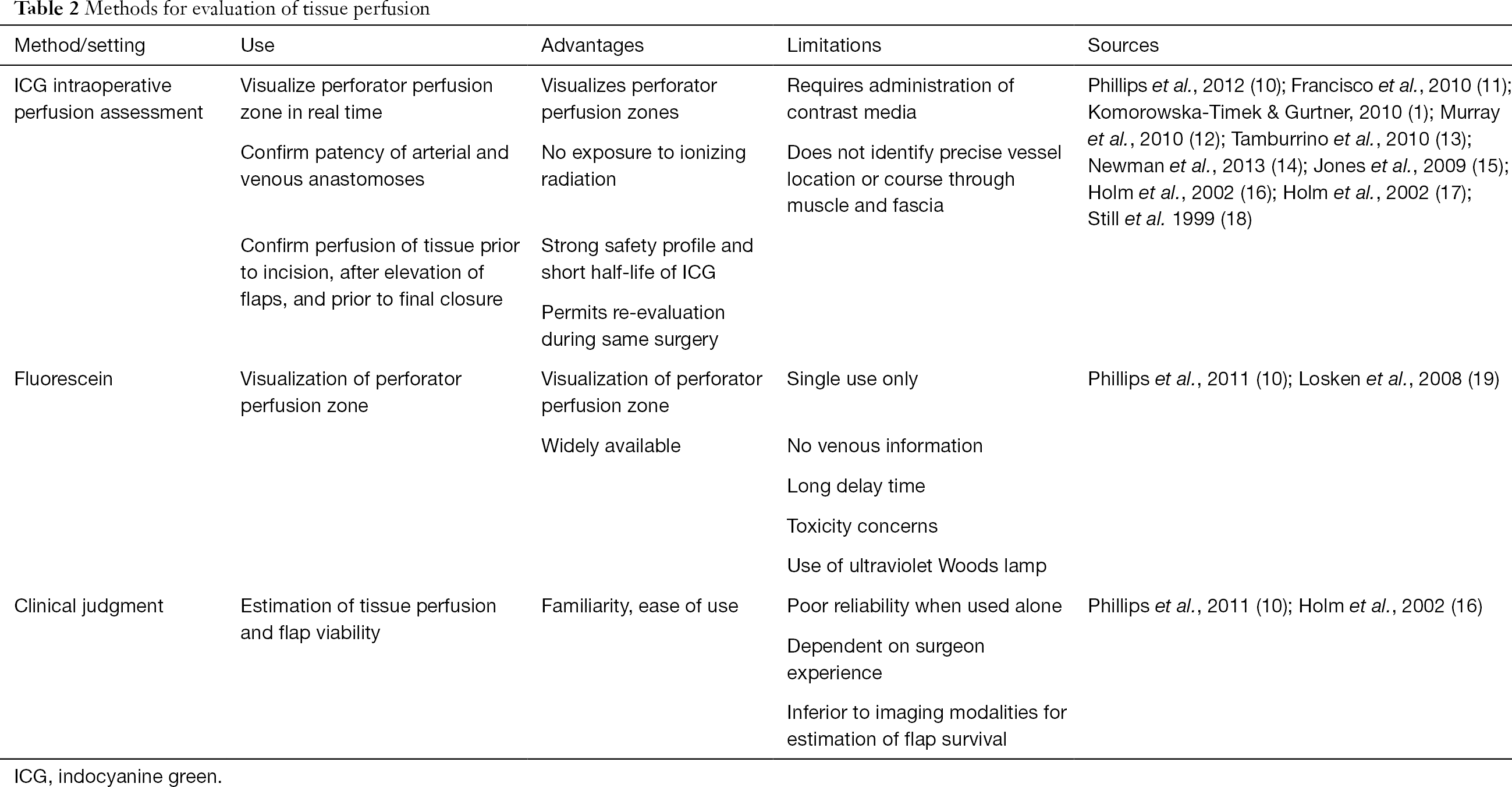 Modalities for the assessment of tissue perfusion

Surgeons generally rely on their judgment for flap evaluation, which generally involves subjective things like flap temperature, tissue color, capillary refill, and dermal bleeding. When clinical judgment is used alone however, even by experienced surgeons, outcomes can still be complicated because perfusion is hard to assess.

The Laser Doppler has been used for evaluation of blood flow within flaps. However, when used intraoperatively, it is highly variable in its readings. In the end, it can underestimate flap survival (21). The technique is also sensitive to small movements (21). A recent study reported that although laser Doppler was effective at identifying ischemia in free flaps, it had poor ability to detect perforator vessels (22). Although the technology continues have promise, it is not ready for standard use.

Transcutaneous oxygen (TCO2) measurement has been shown to improve flap salvage rates when used for postoperative monitoring (23,24). While some have brought TCO2 into the intraoperative setting, mapping flaps with this technology is time consuming and labor intensive. Initial findings suggest that it may have utility postoperatively as a continuous monitoring technology (25,26).

Fluorescein based angiography has also been used in the operating room to evaluate tissue perfusion. It requires the use of a Wood’s lamp. Fluorescein also has some limitations, include a long half-life, leakage from capillaries into the interstitium, and a clearance time of 12 to 18 hours. It is this long half-life which precludes re-evaluation during the intraoperative period, making it less useful (17,27-29). Furthermore, local ischemia enhances fluorescein diffusion, and this can lead to false-positive results (27,30). Head-to-head comparison suggests that fluorescein is not as accurate as ICG, with lower specificity and negative predictive value (10,16,17,19).

ICG has been successfully used as a fluorescence imaging agent to evaluate perfusion in ophthalmologic (31,32), cardiac (33,34), vascular (35,36), and transplant surgery (37). Over the last decade, surgeons have used ICG angiography in plastic reconstructive surgical procedures and have demonstrated clinical utility (1,10-12,38). Since the ICG molecule binds strongly to plasma proteins, it remains in the intravascular space. It also has a short plasma half-life of 3 to 5 minutes in humans (39). These characteristics are important since the dye clears quickly from tissues, allowing repeated evaluations during the same surgical procedure. The dye is given intravenously and is excreted by the liver into the bile. Therefore, it is not associated with any nephrotoxicity. With ICG-based systems, a laser emits a near-infrared wavelength and accordingly does not require protective eyewear or other safety equipment.

Clinical and animal studies in reconstructive surgical procedures have reported strong correlation between the ICG data and postoperative outcomes (14,18,40-42). Both case series and prospective studies have shown ICG visualized intraoperative perfusion was associated with reduced rates of complications, specifically postoperative necrosis and flap loss. This has been observed in a variety of procedures, including implant surgery, pedicle flaps, and free tissue transfers (1,5,8,15-17,38,43,44).

Intraoperative perfusion assessment using ICG is a vascular imaging methodology that can be used in the intraoperative or postoperative setting to visually assess superficial blood flow. Characteristics of ICG angiography make it a desirable option for skin evaluation. The technique provides real-time assessment of tissue perfusion that has been correlated with clinical outcomes (1,5,6,10,38) and guides surgical decision making in many surgical disciplines. With mastectomy skin evaluation, early identification of insufficiently perfused tissue has helped guide intraoperative decision making, such as the need for intraoperative mastectomy skin resection or the decision to perform a surgical delay.

The information provided by ICG-based systems augment and strengthen clinical judgment and provides the surgeon with real-time visualization of tissue perfusion and vascular changes that result from surgical maneuvers. Additionally, the ICG is collected by the lymphatic system and ICG-based systems show promise in lymphatic surgery (sentinel lymph node sampling, lymphedema surgery).

Software aided evaluation of ICG fluorescence (i.e., SPY-Q™ Analysis Toolkit) provides additional analysis tools, including the measurement of peak fluorescence intensity, ICG ingress and ICG egress. The software also allows comparison of different areas within the tissues. These algorithms have been shown in Level 1 clinical study to accurately predict skin necrosis (see Figure 1). That said, the clinician remains responsible for determining at-risk tissue based on their standard clinical practices while the visual evaluation of perfusion images is additive. 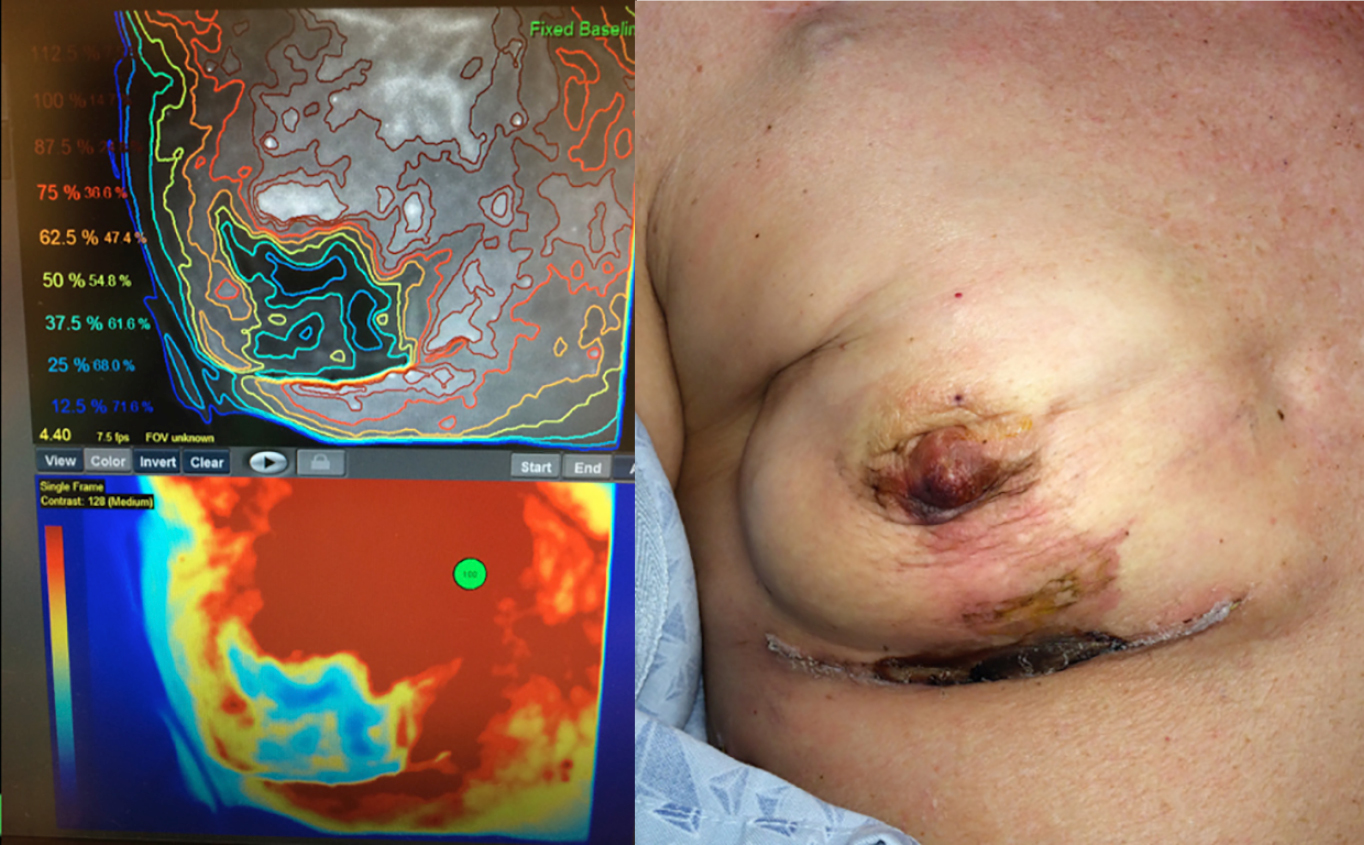 Figure 1 A clinical example of SPY’s predictive value. Areas in dark blue on the left were predicted to necrose but the clinical judgment was to leave the skin. The SPY distribution mirrors the areas of ischemia and necrosis seen on the right.

ICG-based systems can be used to evaluate perfusion in the NAC during mastectomies, including skin-sparing (SSM) and nipple-sparing mastectomies (NSM). Once the mastectomy has been completed, the NAC can be evaluated by examining both superficial epidermis and deep dermal and subcutaneous tissues to help determine whether the NAC is safe to use during the reconstruction. By examining the mastectomy skin and nipple with a sizer in place, ICG-based systems can help the surgeon decide to place the permanent implant or to delay the tissues and perform a staged reconstruction with placement of a tissue expander. There is also data to suggest that a preliminary scan prior to incision can show the dominance of blood supply to the NAC and help determine the best access incisions for the mastectomy (45).

Prevention is the key to the management of skin ischemia and prevention of necrosis a priority. When poor blood supply is suspected by clinical judgment and/or technologic means, direct-to-implant reconstruction should be temporarily abandoned and consideration given to delaying the procedure. Placement of a deflated tissue expander would be standard but the dissection necessary to place the expander below the muscle and the pressure of the device on the skin add unnecessary risk and may remove any chance of a nipple-sparing procedure. Additionally, placement of an expander commits the patient to months of expansion, possible nipple malposition due to the expansion process, and a second procedure to exchange the expander for a final implant. Completely backing out of the reconstruction and not placing an expander leaves open the possibility of a direct-to-implant reconstruction two weeks later. This “staged-immediate” procedure, also known as a “Zenn Delay” has been reported with excellent aesthetic results and a low complication rate (46). This technique offers certain advantages over the standard placement of a tissue expander (Table 3) may well represent the best approach for the breast reconstructive surgeon who desires to reconstruct NSMs but is experiencing skin or nipple loss in their practice (see Figure 2). In the setting of value-based care and depending on the incidence of necrosis and complications in a surgeons practice, use of the Zenn Delay would allow more patients to be successfully reconstructed at a lower cost to our healthcare system.

Figure 2 A clinical example of a Zenn Delay, pictured on the left deflated, at 2 weeks after mastectomy and ready for direct-to-implant reconstruction. On the right, 2 months postoperative from a one stage, ADM-supported (DermACELL 16 cm × 20 cm) round smooth silicone gel implant (Mentor) breast reconstruction. Note the nature ptosis and correct nipple position obtainable without intervening months of tissue expansion.

The performance of NSM is desired by our patients but inherently presents the risk of vascular compromise and complications. If one is experiencing such complications, technology can help delineate poor perfusion can provide a chance to intervene and prevent devastating complications. ICG-based systems have proven their clinical utility for the perioperative visualization of blood flow in mastectomy flaps. With the use of ADM now commonplace, this has allowed us to rethink immediate reconstruction with direct-to-implant or tissue reconstruction.

Conflicts of Interest: Dr. MR Zenn was Chief Medical Officer for Novadaq (SPY technology) 2016–2017, is a consultant for Stryker, and receives royalties from QMP (DVDs, app) and Thieme (textbook).