Implant based breast reconstruction (IBBR) is the most frequent reconstructive choice nowadays. This is true both in the setting of simple mastectomy and even more in case of conservative mastectomies such as nipple sparing mastectomy (NSM) (1,2). In the early era of prosthetic reconstruction, subcutaneous implant placement represented the first attempted technique, as described by Snyderman in 1971 (3). Shortly after, also the first pioneers of tissue expansion, Radovan and Lapin, adopted a subcutaneous placement of their expanders (4,5). By that time, however, most of reconstructions were delayed and in the setting of a previous radical mastectomy with the absence of pectoralis major muscle (PMM). Thanks to the diffusion of modified radical mastectomy and in order to avoid some complications of the subcutaneous techniques, such as prosthesis extrusion, in 1981, Gruber advocated the superiority of a submuscular implant reconstruction over the Snyderman’s procedure (6). This principle was also transferred to the tissue expander (TE) approach by Argenta (7). The retro-pectoral approach became the gold standard for more than two decades in the breast reconstructive surgeon armamentarium. Prosthesis coverage by a muscular pocket in order to interpose a viable cushion in case of skin flap/wound dehiscence and in order to avoid a too “visible” implant represented the most commonly used option for years until recently.

With the introduction of soft tissue replacement devices, either biological or synthetic, many things have changed in IBBR. A combined muscular-matrix pocket (dual-plane) has become a very common solution. Eventually, the use of these supportive devices has led to a novel approach consisting in a pre-pectoral placement of the prosthesis, entirely covered by a biological or synthetic matrix, which is actually like “revisiting an old place” as some authors stated (8).

This novel subcutaneous technique, performed with the aid of a synthetic soft tissue replacement device, was described for the first time in 2014 (9). Later on, another paper reported smaller series of a pre-pectoral breast reconstruction, using acellular dermal matrixes (ADMs) as full implant coverage (10). Recently, the long-term results of clinical studies on the pre-pectoral reconstructions by means of a synthetic matrix were published (11,12). Several other studies reported similar results with biological matrixes (8,13-19). A pre-pectoral approach showed, in all these series, a highly documented surgical safety, comparable to the standard full muscular coverage and to the dual-plane coverage. Moreover, cosmetic and functional results were very satisfying. Natural ptosis and breast appearance, 0% capsular contracture, reduced pain and chest tightness, no implant animation and animation deformities were all reported as results of the pre-pectoral reconstruction. All of these problems are instead described with varying rates in the retro-pectoral approach, either partial (dual-plane) or complete (complete submuscular pocket), meaning that the use of the muscle is the real hinge in this topic. Nonetheless, there are still some pitfalls and drawbacks in the pre-pectoral technique, both with the use of biological and synthetic materials. First of all, there is a safety issue: patients with previous radiation therapy on chest wall and patients at risk of poor skin flap vascularization (i.e., active smokers and diabetic) are not good candidate because of high risk of wound dehiscence and prosthetic infection rates. Furthermore, there is a cosmetic issue to deal with when performing the pre-pectoral technique in thin patients, namely some upper pole defects such as rippling, or visible and palpable implant rims. In these circumstances the use of a well vascularized, soft and slick cushion, like PMM, between the skin flap and any prosthetic device is recommended.

By the way, if we desire to avoid all the drawbacks of a “window-shading” structure coming from muscular contraction, still retaining the advantages of the muscle, we can denervate the muscle itself preventing its undesirable effects.

The traditional description of pectoral nerves anatomy comprised two trunks. A dual nerve supply was described for PMM and a single nerve for pectoralis minor muscle (PmM). Namely the lateral pectoral nerve, deriving from the lateral cord of brachial plexus, was considered the main supply of PMM, innervating it from its undersurface where it runs with the thoraco-acromial vessels. On the other hand, the medial pectoral nerve, from medial cord of brachial plexus, which is actually found laterally and inferiorly by surgeons in their dissection through this region, is innervating both the PmM and PMM. Indeed, the medial trunk, after running on the undersurface of PmM, pierces with some branches the PmM to reach the PMM contributing to the innervation of the lateral portion of PMM. This happens in more than 60% of cases, in the rest of cases it gives one or more branches that actually exit around the lateral aspect of PmM to reach and innervate the infero-lateral border of PMM (20,21).

More recently, accurate and more detailed studies have shown a three-nerve supply for PMM (22). Such description is also corroborated by the anatomical and functional classification of PMM itself, with three distinct parts: its clavicular portion, sternal and costal aspects. A different nerve nomenclature is also adopted, being more familiar for a surgeon rather than an anatomist. In fact, a superior, middle and inferior pectoral nerve branches are identified. The superior branch, from lateral cord of brachial plexus, is usually not found in breast reconstructive surgery and innervates the clavicular portion of PMM. The middle branch, which comes form lateral cord and runs on the undersurface of PMM along with the thoraco-acromial vessels, innervates the sternal aspect of PMM. In 77% of cases the superior and middle branches arise separately from brachial plexus. Albeit separate, in 62% of cases there is a connection between the two branches, while in the remaining 15% they are completely disjoined. In 23% of cases, instead, the two branches have a common origin from brachial plexus, but divide immediately, above the subclavian artery, to form two different nerves. The inferior pectoral nerve branch, coming from medial cord of brachial plexus, innervates the PmM and the costal portion of PMM. This nerve, as described by Hoffman (21), pierces PmM to reach PMM in 65% of cases, while exits around PmM to reach the lateral border of PMM in the remainder (35%). Inferior and middle branches are always connected by an ansa pectoralis, almost at their origin.

While performing a submuscular pocket for a retro-pectoral breast reconstruction, either hybrid with some kind of matrix (dual-plane) or completely submuscular, a dissection plane is identified between PmM and PMM in the standard fashion. Extending the dissection in a quite cephalad direction the pectoral nerves area can be easily accessed, identifying the inferior and middle branches. This can be done almost from every type of breast incision and doesn’t need a separate axillary access. At this point, hence, a selective two-third PMM denervation can be accomplished. Inferior nerve branches piercing the PmM are severed during the two pectoral muscles separation, otherwise an inferior branch exiting around the lateral border of PmM, in those cases (approximately 35%) in which it doesn’t pierce PmM, must be identified and severed. Middle branch is transected after separating it from thoraco-acromial vessels on the undersurface of PMM (Figure 1). 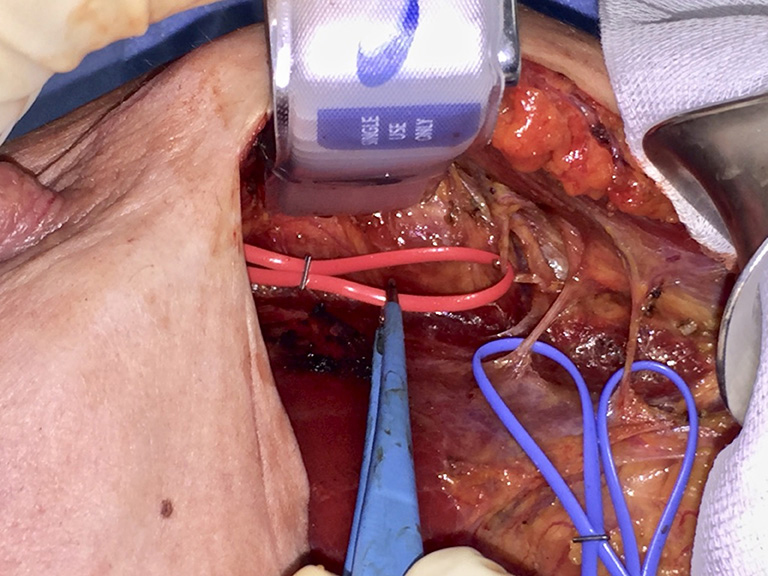 Figure 1 Identification of middle and inferior pectoral nerve branches (MPN, IPN) through a radial outer upper quadrant incision, while performing a nipple sparing mastectomy. MPN is isolated with a red loop right along the thoraco-acromial vessels. Two separate IPN branches are isolated with blue loops after having pierced the pectoralis minor muscle and before entering the pectoralis major muscle.

With such selective PMM denervation the clavicular portion is left normally intact, thus avoiding any type of depression beneath the clavicle. While the clavicular portion of PMM retains all of its muscular properties, the other two thirds, the sternal and costal aspects, loose any contractile feature, still keeping, though, the characteristics of a viable well-vascularized soft tissue. As a matter of fact, this portion of the PMM is no more a functional muscle in any submuscular breast reconstruction, being its distal attachment the prosthetic capsule instead of a skeletal surface. Therefore, its denervation doesn’t preclude any functional movement of PMM but only its detrimental activity on the prosthetic device. Moreover, since pectoral nerves are described as having proprioceptive and nociceptive fibers too, the denervated area of PMM will not transmit any unpleasant sensations as well. The sternal and costal aspects are those covering any prosthetic device chosen for reconstruction, and therefore this selective denervation is aimed to obtain a soft vascularized cushion over the implants, without any discomfort and animation deriving from an intact nerve supply. An obvious partial atrophy of PMM will ensue, but a few millimeters vascularized, floppy pad will always remain to cover the entire implant or at least its upper pole in dual plane techniques. The rationale for doing such a denervation could be considered partially similar to the one adopted in the latissimus dorsi (LD) flap beast reconstruction (23-25). In LD reconstruction a significant flap atrophy is always a consequence of denervation, to be reckoned in the preoperative planning. In LD flap, although, the denervation is aimed to avoid muscle twitching, since the thoraco-dorsal nerve doesn’t have any sensory fiber, while in case of pectoral denervation there is a double objective: avoidance of cosmetic pitfalls from animation deformity plus riddance of unpleasant discomfort feelings, chest tightness and even pain deriving from persistent muscular contraction. Besides, the same goals have been searched in other ways such as botulinum toxin injections both in LD flaps and retro-pectoral breast reconstructions (26), with less predictable and definitive results than in denervation.

From September 2016 until September 2017, 56 selective PMM denervation in 48 patients were performed at University of Florence, Italy, teaching hospital. Twenty-one cases were TE reconstruction in a complete submuscular pocket, 28 cases were direct-to-implant (DTI) retro-pectoral dual plane (by means of a synthetic matrix) breast reconstructions (Figures 2-4) and 7 cases were revising surgeries of previous submuscular implant reconstructions of patients with Baker grades III–IV capsular contracture (Figures 5-7). A subjective evaluation is routinely conducted at our institution at 6 and 12 months from definitive implant positioning (DTI or second stage after TE reconstruction), using the postoperative section of BREAST-Q reconstruction module (Memorial Sloan-Kettering Cancer Center and The University of British Columbia© 2006, all rights reserved). Three patients completed the 12-month questionnaire and 20 patients the 6-month follow-up questionnaire. The BREAST-Q reconstruction module was divided into five independent scales with a transformed score ranging from 0 to 100, as reported in our previously published papers (11,12). The two scales of “satisfaction with outcome” and “physical well-being” reported a median of 100 and 97. All seven patients submitted to revising surgery with capsulotomy and selective PMM denervation considered their discomfort and pain resolved 1 month after surgery. 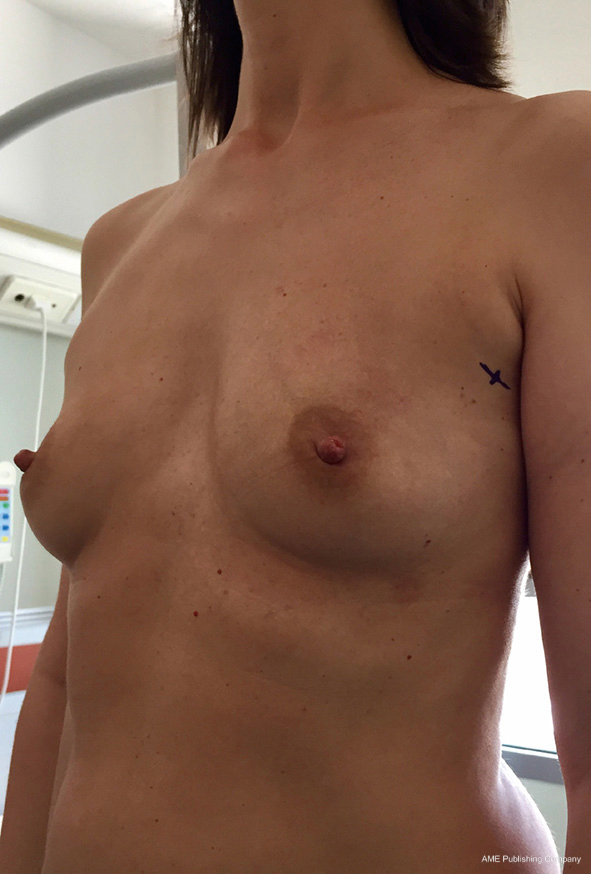 Figure 2 Preoperative picture of a 42-year-old woman with a left multicentric breast cancer in a quite skinny anterior chest wall. 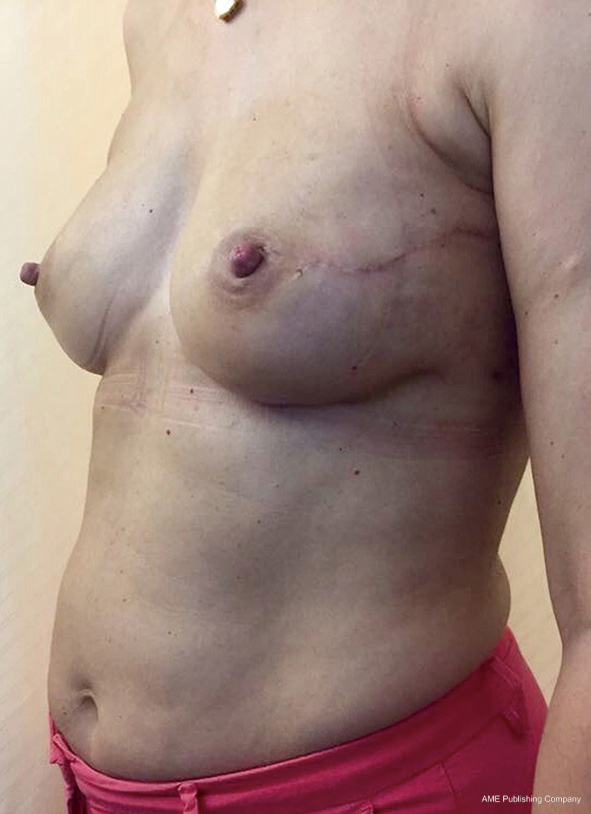 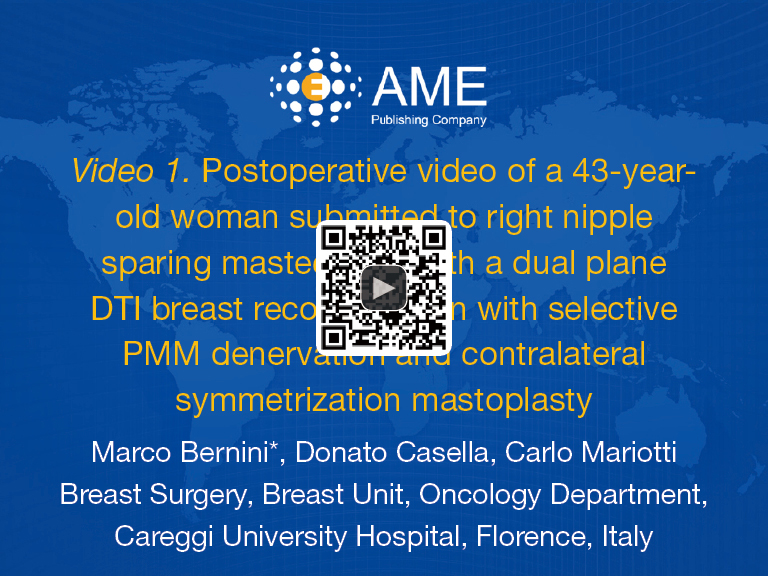 Figure 4 Postoperative video of a 43-year-old woman submitted to right nipple sparing mastectomy with a dual plane DTI breast reconstruction with selective PMM denervation and contralateral symmetrization mastoplasty (27). After 2 weeks from surgery, it is clearly evident at PMM voluntary contraction maneuver that only the clavicular portion in moving while the costal and sternal aspects are denervated. The implant positioned on the right side is not animated at all. On the left side the whole muscle is intact and contracting normally. DTI, direct-to-implant; PMM, pectoralis major muscle. Available online: http://www.asvide.com/articles/1827 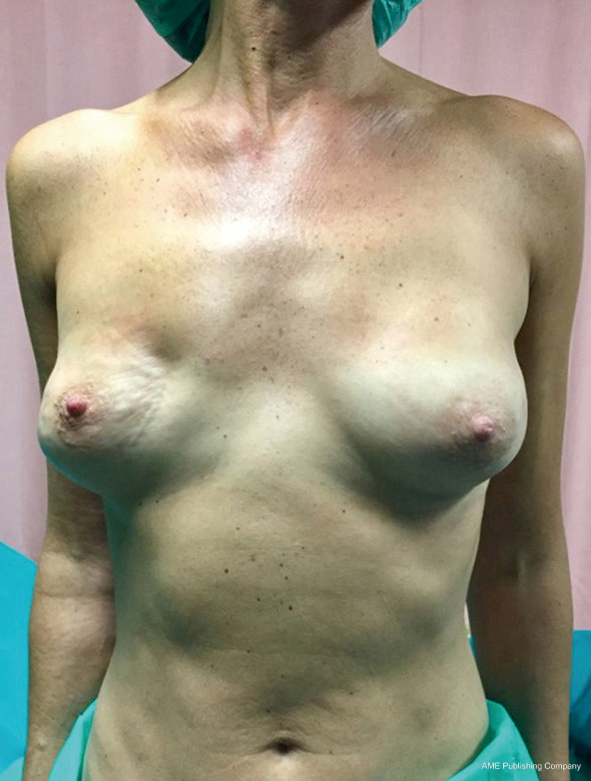 Figure 5 Preoperative picture of a 45-year-old woman previously submitted to a bilateral nipple sparing mastectomy and two-stage complete submuscular implant based breast reconstruction for BRCA gene mutation. One year after surgery a capsular contracture of grade IV on Baker scale is clearly visible on right side, with a grade II on left side. BRCA, breast related cancer antigens. 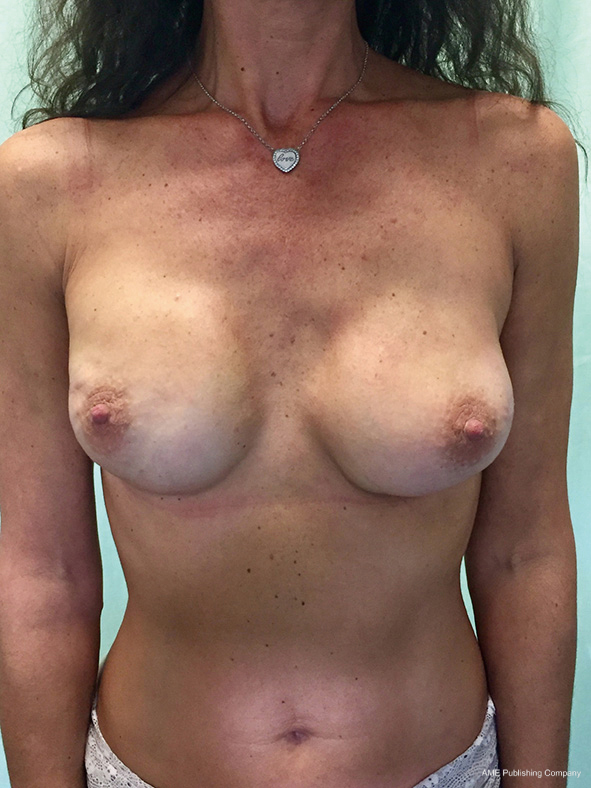 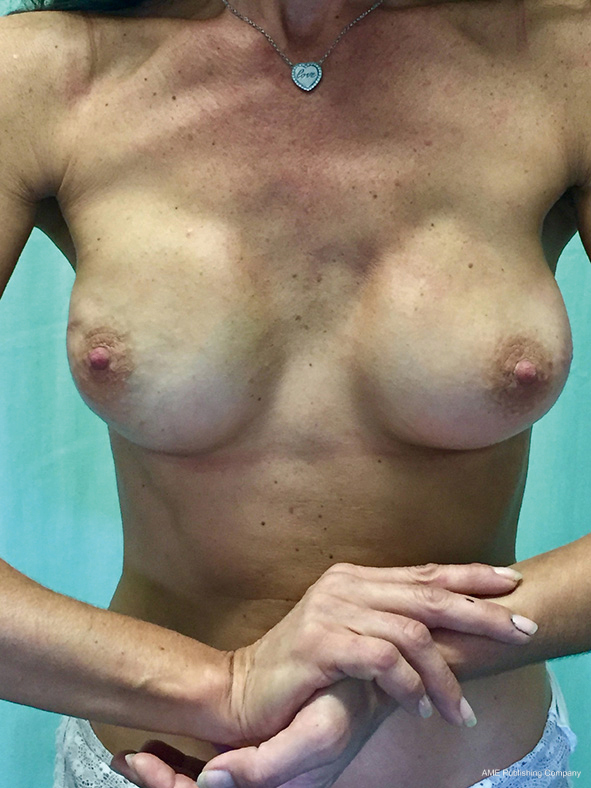 Figure 7 Postoperative picture 6 months after revising surgery showing a PMM contraction maneuver. The clavicular portion of PMM only is contracting, while the sternal and costal aspects are not moving and not animating the implants. PMM, pectoralis major muscle.

Informed Consent: Written informed consent was obtained from the patients for publication of this manuscript and any accompanying images.