Simultaneous ectopic intrathyroidal thymus and intrathymic parathyroid gland tissue is an uncommon finding that is often discovered incidentally during surgery, and is a result of aberrant migration and obliteration of thymic tissue during embryogenesis (1). Here we outline a case of intrathyroidal thymic and intrathymic parathyroid tissue found in a patient during a thyroidectomy for surgical treatment of Graves disease.

Our case was a 23-year-old female who had diagnosed Graves disease with clinical hyperthyroidism and exophthalmos, and asthma. The patient was referred to our hospital by an endocrinologist for evaluation and surgical consultation for Graves disease refractory to medical therapy. She was initially treated with Methimazole, but discontinued it because she developed pruritus that could not be controlled with hydrazine. She was subsequently put on propythiouracil, but continued to have symptoms of hyperthyroidism diarrhea, excessively warm skin, dry skin, anxiety, sleep disturbance, exophthalmos, and bilateral hand tremors. Her mother was known to have clinical hyperthyroidism. Neck ultrasound showed an enlarged and hypervascular thyroid gland (Figure 1). A radioactive iodine uptake test was performed and demonstrated diffuse homogenous uptake of radioiodine within the thyroid gland. The radioactive uptake of the gland was found to be 50.2% at 4 h and 72.1% at 24 h, which represents elevated uptake. 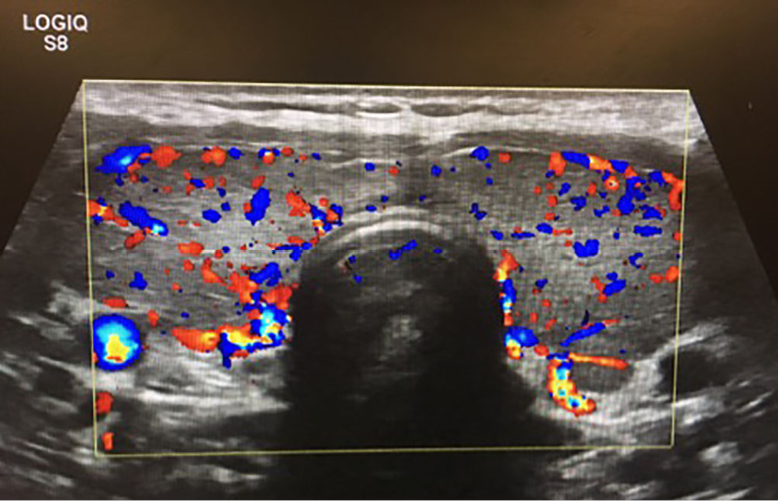 The patient then underwent a total thyroidectomy with right inferior parathyroidectomy which was performed for an enlarged suspicious parathyroid gland encountered during surgery. Surgical pathology of the thyroid gland showed diffuse hyperplasia of thyroid tissue with partial colloid involution, consistent with treated Graves disease with focal intrathyroidal ectopic thymic tissue, along with focal intrathyroidal chondroid metaplasia (Figure 2). Frozen section of the suspicious enlarged right inferior parathyroid gland grossly showed a red-brown soft tissue with attached tan-yellow lobular adipose tissue, microscopically revealed thymic tissue with small clusters of epithelial cells that were consistent with parathyroid gland tissue (Figure 3). The postoperative period was uneventful with no complications, and the patient was discharged day one postoperatively. However, the patient noted mild numbness of her finger tips bilaterally during a follow-up clinic appointment a few of weeks after surgery, which was treated with supplemental calcium. 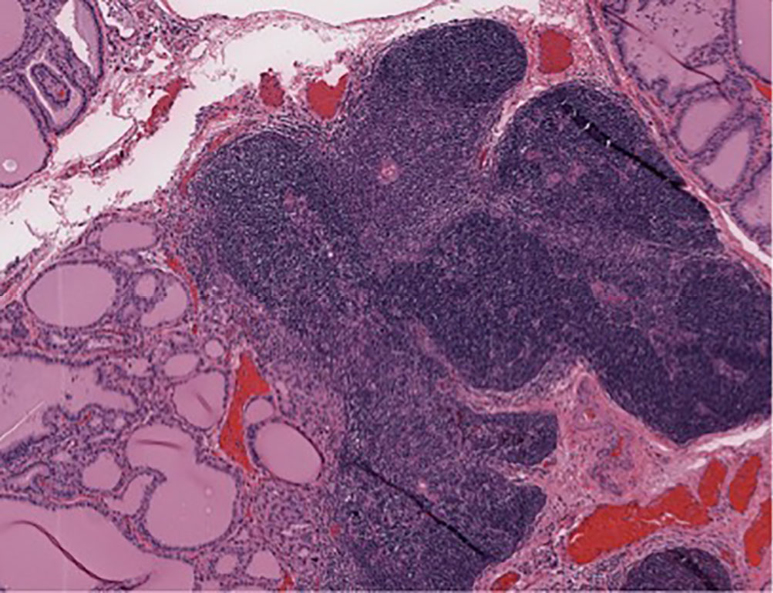 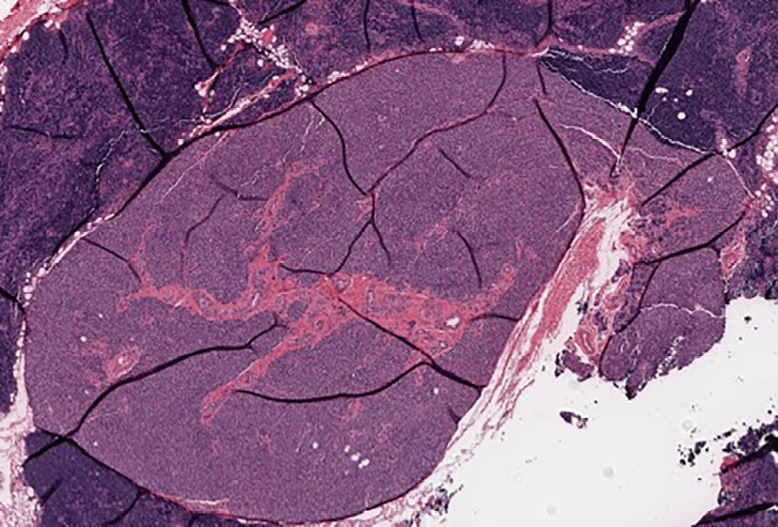 The thymus develops early during embryological period from the 3rd (and sometimes the 4th) pharyngeal pouches bilaterally (2). By the 8th week, the epithelium involutes on each side and the rudimentary thymic tissues migrate caudally into the superior mediastinum in the chest cavity, where they fuse to form the thymus gland. During its migration, the thymic tissue separates from the branchial epithelium and the remaining thymopharyngeal tract is obliterated. However, the destruction of the tail end portion of thymic tissue may be incomplete following migration, and remaining thymic tissue can persist at ectopic sites (3). Since the inferior parathyroid glands also develop and migrate with thymic tissue, they may also persist in the cervical area, superior mediastinum, or within the thyroid gland. The thymus persists as a site of T-cell differentiation and proliferation until the time of puberty, when most of the active lymphatic tissue is replaced by adipose tissue in a process called involution (4). In our case, this accounted for the gross appearance of tan to yellow lobular tissue that was later identified as intrathyroidal thymic tissue.

The finding of ectopic intrathyroidal thymus is in itself a rare entity. The incidence of ectopic intrathyroidal thymus in children was assessed in a large study conducted in Japan following the Fukushima Daiichi nuclear power plant accident. The appearance of hypoechoic and hyperechoic areas with multiple punctate foci within the thyroid gland was detected by ultrasonography in 0.99% of cases (5). While most ectopic thymic tissue is found incidentally during surgery, the most practical method of detecting ectopic thymic tissue is by ultrasonography (6), which may be performed if a patient has a neck mass of unknown origin, is experiencing compressive neck symptoms, or has an enlarged thyroid nodule. There are characteristic echo findings of aberrant thymic tissue, such as multiple hypoechogenic linear or punctate structures (7). These findings have been deemed to be distinct enough to merit a diagnosis of aberrant thymic tissue in the neck region.

The relation of our patient’s Graves disease to the ectopic tissue is of unknown significance. Thymic hyperplasia has been well documented in Graves disease (albeit rare) that is thought to be related to the existence of thyrotropin receptors in thymus tissue (8). Handra-Luca reported two cases of patients with Graves disease that were also found to have thymus-parathyroid tissue within parathyroid fat, separate from the capsule of the thyroid, during their respective thyroidectomies (9). These patients also demonstrated postoperative hypocalcemia that required medication. This complication of hypocalcemia warrants further research into ectopic thymus-parathyroid tissue and its possible connection to hormonal changes related to Graves disease.

Very few cases of simultaneous intrathyroidal thymic and intrathymic parathyroid tissue have been reported in the literature. This finding is most likely to be found incidentally during surgery, but it can be identified on ultrasonography if clinical presentation warrants testing. At this time, the significance of thymic tissue in the thyroid gland of an adult is uncertain and it is an area of research open for investigation. This finding in patients with Graves disease may have a connection to the observed hypocalcemia post-thyroidectomy, as seen a multiple case reports.

The authors thank Dr. A. Kadi for help and comments that improved the manuscript.

Informed Consent: Written informed consent was obtained from the patient for publication of this Case Report and any accompanying images. A copy of the written consent is available for review by the Editor-in-Chief of this journal.