The four stages of conservation for women with breast cancer, as developed by Veronesi and colleagues over the last 50 years are: (I) breast conservation by ample tumor resection (quadrantectomy) combined with radical radiotherapy (50 plus 10 Gy boost to the tumor bed) and complete axillary dissection (all three Berg levels) (1,2); (II) sentinel node biopsy which accurately stages the axilla and permits avoidance of axillary dissection when the sentinel nodes are negative (3); (III) intraoperative radiotherapy with electrons (ELIOT), which sterilizes the part of the breast (tumor bed) most likely to harbor residual cancer cells, under the direct control of the surgeon (4); and (IV) nipple-sparing mastectomy, which spares the skin and the nipple, and it is indicated in selected patients for whom conservative surgery is not possible and Patey mastectomy would be overtreatment (5).

We report on a series of patients who underwent nipple-sparing mastectomy but did not receive ELIOT or external beam radiotherapy in the days following surgery, because of sub-optimal vascularization of the NAC due to a more radical surgery with minor preservation of glandular retroareolar tissue.

This variant of nipple-sparing technique could be considered introductory at conservative mastectomy surgery developed in recent years in our institute, which provide a complete excision of mammary tissue, including all ducts in the nipple (9).

From July 2003 to April 2010, 1,141 patients received nipple-sparing mastectomy at our institute. Most received ELIOT but in 30 cases (median age 45.6 years, range 33–62 years) neither ELIOT nor subsequent external beam radiotherapy was administered.

This decision originated from the plastic surgeon who decided not to give irradiation to increase the chance of NAC survival, or from the oncologist surgeon, who considered without any doubt mastectomy radical and NAC irradiation unnecessary. For these 30 patients, a close follow-up was then planned.

The characteristics of these patients and their tumors are shown in Table 1.

The initial skin incision is usually made to remove a lens-shaped paddle of skin, which is widest directly above the tumor (and includes the biopsy scar). This paddle does not include the areola, and the incision margin is at least 0.5 cm from the areolar border. The external margins are dissected first down to the lateral border of the pectoralis major. This dissection proceeds between the gland and the subdermis taking care that no gland remains attached to the subdermis, and that skin layer is not too thin (at least 5 mm) (10). The gland is then detached from the fascia of the pectoralis major; above the pectoralis we try to spare the subdermal branches of the perforator vessels coming from the internal mammary vessels. Laterally the axillary vessels are saved only when the axilla dissection has not been performed. The gland is then detached from subdermis in the area behind the NAC with a careful retroareolar dissection balancing complete removal of ducts with protection of nipple vascularization. The sentinel node can usually be removed through the incision used to remove the breast; axillary node dissection if required can also be accomplished via this incision.

Patients usually receive immediate breast construction with a prosthesis inserted behind the pectoralis major and serratus anterior muscles. In certain cases, when the skin envelop is well supplied with blood, the muscular pocket is not completed with the serratus anterior muscle or its fascia only. It is important to preserve at least one and preferably two perforator vessels from the internal mammary vessels when mobilizing the pectoralis major to ensure a good blood supply of the NAC. When the patient has a large breast, reconstruction with an autologous myocutaneous flap and contralateral breast remodeling is considered. When the NAC blood supply is good, and if there is excess skin, it is possible to reduce the amount of skin by periareolar de-epithelialization followed by re-apposition of the skin flaps.

On intraoperative frozen section of the retroareolar glandular slice, no tumor was found at first time in 29 cases, after a second slice in one case. In the other case DIN was found but only on the side of slice next to tumor bed, so was decided to keep the NAC.

Definitive postoperative pathological examination of retroareolar samples was performed in 29 cases: 26 were disease-free, and 3 contained in situ disease (2 DIN and 1 lobular intraepithelial neoplasia). We suggested to these three patients the NAC excision, but they chose to undergo a close follow-up to preserve a better aesthetic outcome.

Breast disease (carcinoma or intraepithelial neoplasia) was found in 29 mastectomies; in the other case—mastectomy after prior conservative surgery with involved margins—no trace of tumor was found (Table 1). All patients underwent immediate breast reconstruction: 22 with definitive implants and 8 with tissue expanders.

There were no LRs during a median follow-up of 5 years, however, one patient was lost to follow up. Six patients developed distant metastases and two patients died, one for breast cancer.

Postoperative complications and outcomes are summarized in Table 2. NAC loss occurred in six patients as a complication of surgery. Re-operation under local anesthesia was performed in all these cases to remove necrotic tissue and perform cosmesis. The removed tissue was not examined pathologically, so these cases were excluded from the assessment of LR. 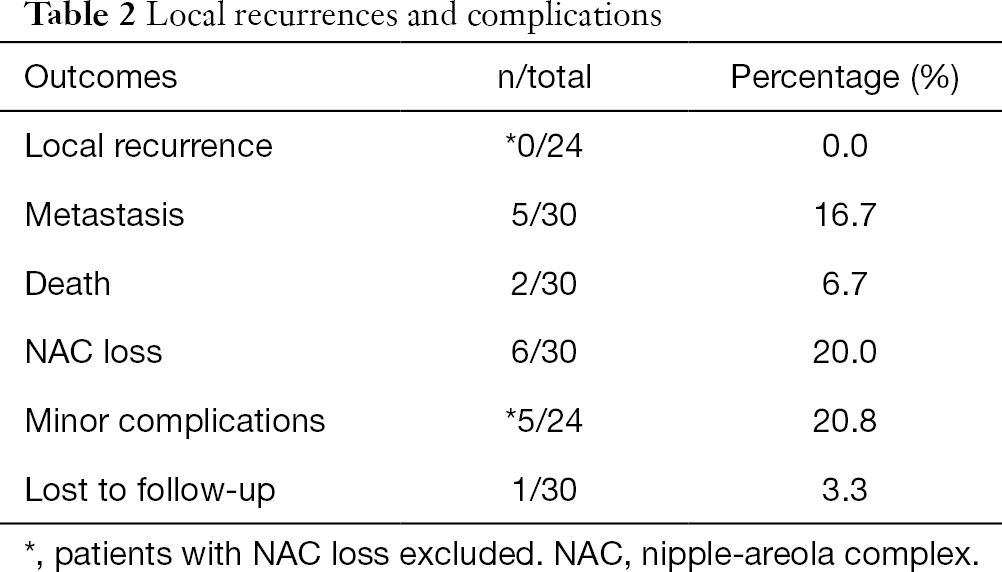 Minor post-operative complications (partial NAC necrosis) occurred in five patients. In three, superficial de-epithelialization was followed by early and spontaneous restoration. In one case, a crescent of skin marginal to the areola underwent full-thickness necrosis, which was removed at an outpatient visit. In the final case, the nipple was lost but the surrounding areola survived.

Several studies have found that the probability of occult NAC involvement is dependent on tumor-areolar margin distance and tumor size, but other predictors of involvement have not been definitively established (11-14). Our policy is to exclude patients with very short tumor areolar margin distance (less than about 2 cm), nipple discharge, microcalcifications, and radiological alterations close to the nipple. We also perform an intraoperative frozen section examination to check for NAC involvement: this biopsy is the most important parameter to decide whether keep the nipple or not, if necessary a second slice of retroareolar tissue can be taken to prove the absence of tumor.

Finally, we used to irradiate the NAC intraoperatively to further reduce the risk of LR (15) since anatomically the NAC is considered part of the breast gland.

However, NAC irradiation comes at a cost. Its acute effects are skin erythema and edema, indicating vasodilatation and increased vessel permeability, but whose long-term effect is hindrance rather than facilitation of blood flow (16). Dry desquamation could follow with healing over several weeks or in some cases partial or complete NAC loss. Thus, irradiation can threaten nipple viability, particularly if the blood supply is suboptimal, since other factors that compromise areolar blood supply, e.g., skin incision in the superior areolar region, or extensive lateral dissection has occurred.

NAC loss may be only a minor complication in oncoplastic breast surgery, however women who undergo nipple-sparing mastectomy with immediate reconstruction have high expectations. For these reasons, we consider that a viable (as well as tumor-free) NAC should be a goal of the oncologic treatment.

In our prior publications, we underlined a low rate of LRs in NSM due to ELIOT to stress that the radiotherapy could play a role. However, in our present study it is surprising that in three cases with positive definitive histology, the NAC was not removed and no LR was observed. Maybe an extended excision of the glandular tissue including the core of the ducts lying in the nipple can call into question the value of the intra-operative radiotherapy, but certainly can even threaten the viability of the NAC.

The question arises, at this point, as to whether NAC irradiation is necessary particularly since the rate of LR in centers using ELIOT (5) is comparable that of others which do not irradiate the NAC (17-25).

As we have noted previously (5) however, most of the other published studies on nipple-sparing mastectomy included smaller tumors, which were further from the NAC, than those we select for conservative mastectomy, in addition some of these studies include prophylactic mastectomies, for this reason they are not comparable with our series.

This is an initial study which indicates that conservative mastectomy can be a safe procedure, but requires more important cases and major follow-up time to confirm the oncological safety and to validate these preliminary conclusions.

Ethical Statement: The displayed study was carried out with respect of high ethical standards and in accordance and in conformity to the World Medical Association Declaration of Helsinki (June 1964) and subsequent amendments. The study followed the guidelines of the Bioethical Committee of our institute (No. 3435/AO/15). Written informed consent was obtained from the patient for publication of this manuscript and any accompanying images.