The application of drains in thyroid surgery

Neck hematoma after thyroid surgery is a potentially life threatening complication, and drains are commonly used for early detection of postoperative bleeding. However, in some cases the drain may be blocked by clotted blood and the hemorrhage may be highlighted by neck swelling and respiratory symptoms. In these cases the drain does not provide any benefit and may offer a false sense of tranquility until symptoms appear. Recently, in a systematic review and meta-analysis, Woods et al. showed a reoperation rate for neck hematoma after thyroid and parathyroid surgery of 1% in patients with drain and 0.4% in those without drain and they concluded that the use of drains does not decrease the risk of reoperation for neck hematoma [risk ratio (RR) 1.90; 95% confidence interval (CI) 0.87–4.14] (1). Furthermore, they showed and increased wound infection rate and postoperative pain and prolonged hospital length of stay (LOS) in patients with drain (1), and these conclusions are supported by a more recent meta-analysis (2).

The aim of this meta-analysis was to update the knowledge of the role of drain in thyroid surgery in term of reoperation for bleeding, postoperative complications (i.e., wound infection, hematoma, seroma), postoperative pain and hospital LOS including randomized controlled trials (RCTs) published until 2017.

The PRISMA-P 2015 statement (3) and the PICO method were followed for this systematic review, specifically:

No limitation regarding publication date was considered; only articles in English language were included.

The exclusion criteria were: (I) no RCTs; (II) studies including parathyroid surgery; and (III) studies including lymph node dissection (central or lateral neck dissection) due to the greater extension of surgery compared to thyroidectomy or lobectomy alone that may influence the primary and secondary outcomes of the present meta-analysis.

Two databases were used (i.e., PubMed and Embase) for a systematic search performed on March 2017, using the Mesh terms as follow:

Two independent investigators (Mattia Portinari, Paolo Carcoforo) evaluated titles and abstracts of all identified articles, and the full text of those that met the inclusion criteria was assessed. In case of multiple studies from the same authors and institutions, only the most recent article was included to avoid data duplication.

According to the aim of this review, the rate of reoperation for bleeding, hematoma, wound infection, seroma, the postoperative pain at the POD 1, and the hospital LOS were reported.

Risk of bias in individual studies

The Cochrane Collaboration’s tool was used to assess the quality and the risk of bias of RCTs, specifically were evaluated randomization procedure and allocation concealment, blinding, description of withdrawals and dropouts, and other source of bias (4). Of note, it is quite difficult to obtain blinding in case of drain use, thus blinding of participants and personnel was considered appropriate if the treatment assignment (drain versus no drain) was defined immediately before the wound closure (performance bias), instead blinding of outcome assessment was judged appropriate if the data collection was done by one observer who did not participate in the surgery (detection bias).

Data are presented as mean (standard deviation) for hospital LOS and postoperative pain at POD 1. RRs and 95% CI were used for dichotomous variables, otherwise mean differences (MDs) and 95% CI for continuous variables. Statistical heterogeneity was evaluated and its degree was quantified by the I2 statistic to choose the model for meta-analysis: random-effect for I2 >50%; fixed-effect for I2 ≤50%. Meta-analysis was performed when data for an outcome were available from four or more studies. Sensitivity analyses were performed including the following studies: (I) studies with low risk of selection bias and performance bias; (II) studies in which patients with coagulation disorders or anticoagulant therapy were not excluded; (III) studies in which patients with huge goiter or substernal goiter were not excluded; and (IV) studies with ≥100 patients per trial.

Selection process of the articles

Twenty out of 809 articles were included in the qualitative and quantitative synthesis (Figure 1), and their details are shown in Table 1. Among the 20 studies included, a total of 2,204 patients were enrolled, 1,131 in the drain group and 1,073 in the no drain group. The sample size was <100 patients per trial in 12 (60%) of the included studies, from 100 to 200 patients in 7 (35%) studies and 400 patients in 1 (5%) study (Table 1). Exclusion criteria were the presence of coagulation disorder in 9 studies, anticoagulant therapy in 2 studies, and the presence of a huge goiter or substernal goiter in 6 studies (Table 1). 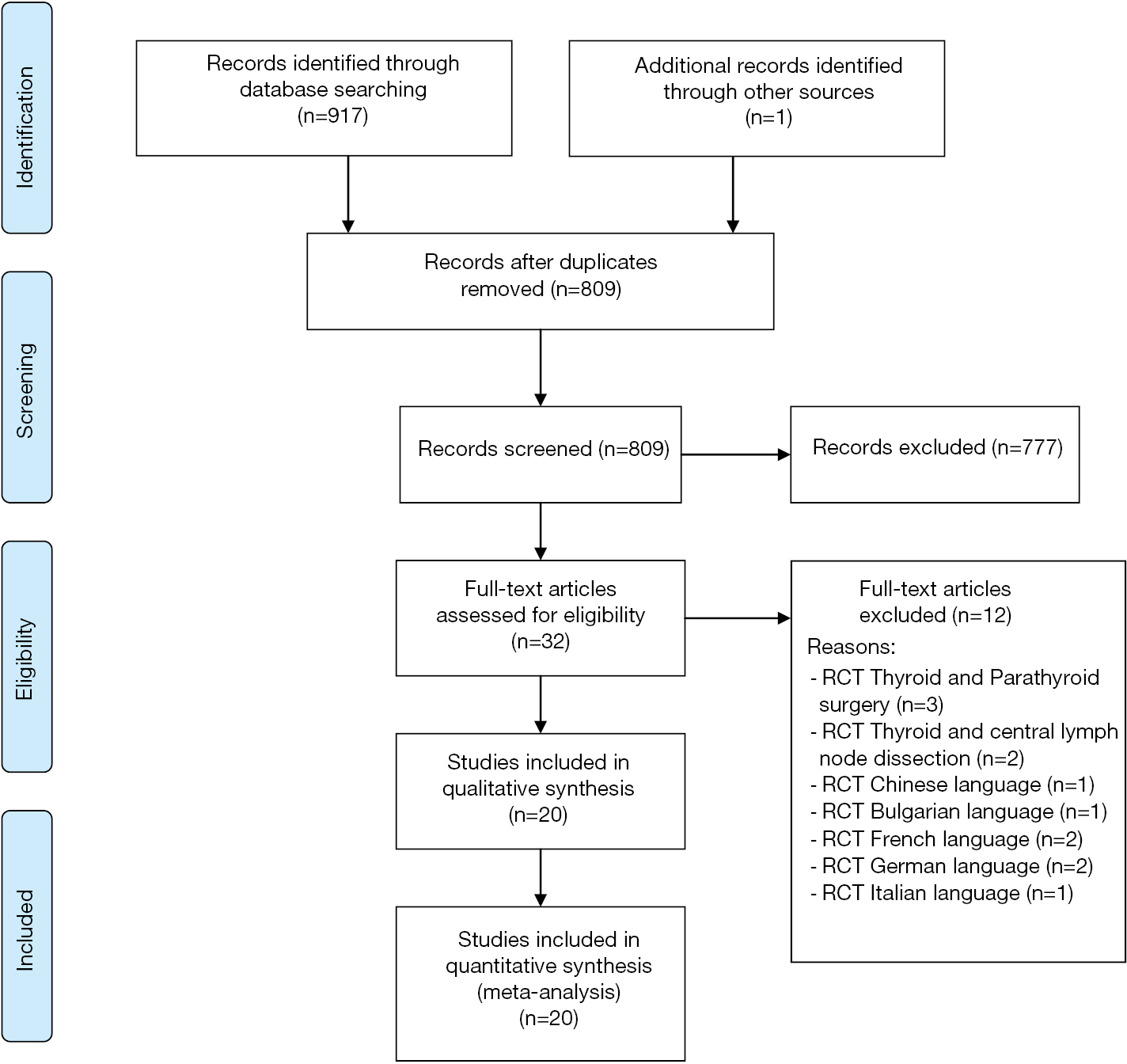 Figure 1 Flow chart illustrating the systematic search and the selection process of the articles. 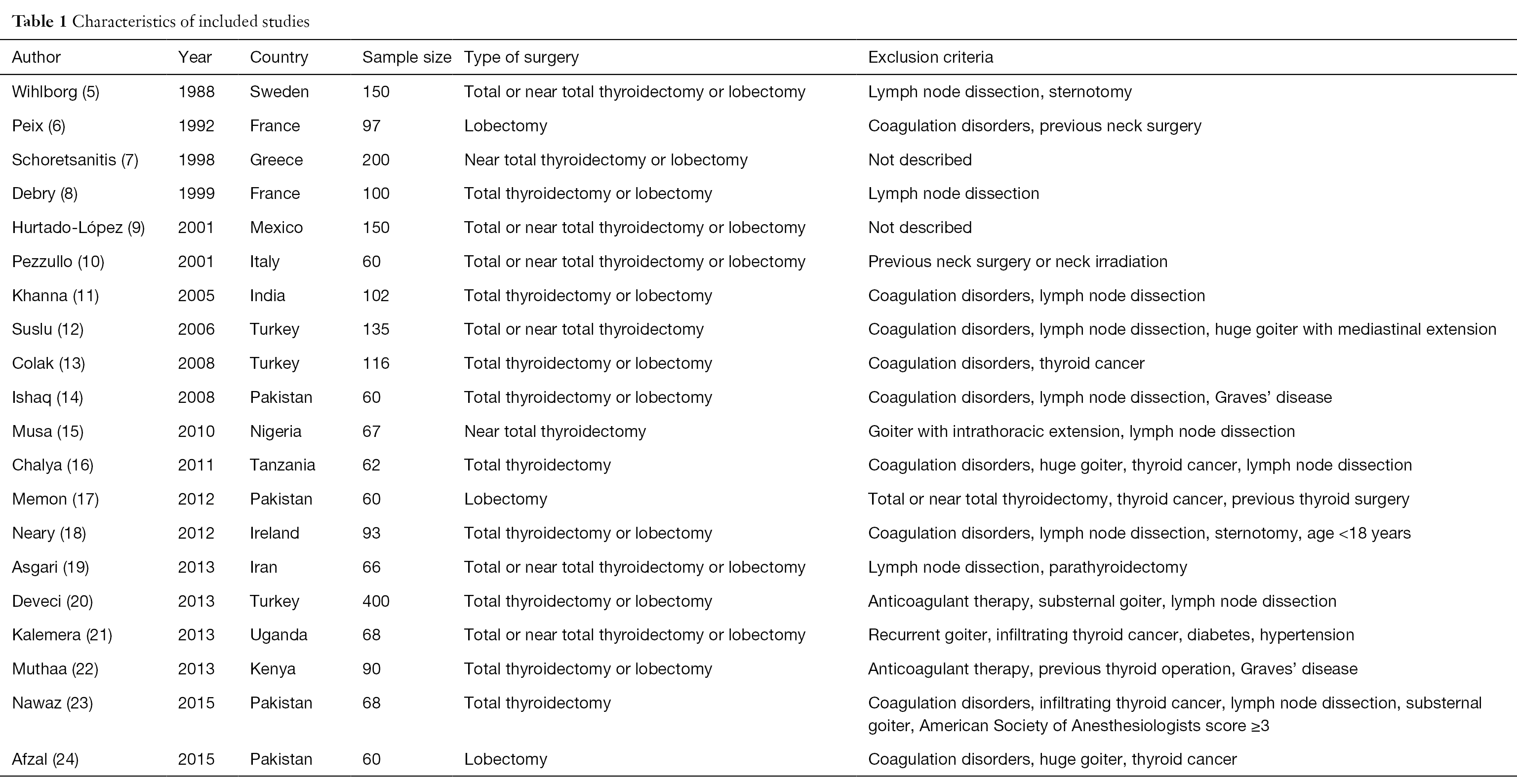 The risk of bias of the included studies is shown in Figures 2 and 3. The random sequence generation was unclear in 3 studies (15%), the allocation concealment in 7 studies (35%), and the blinding of participants and personnel in 8 studies (40%). The blinding of outcome assessment was described only in three studies, in which one observer who did not participate in the surgery performed the data collection.

Figure 2 Risk of bias graph: review authors’ judgements about each risk of bias item presented as percentages across all included studies.

Figure 3 Risk of bias summary: review authors’ judgements about each risk of bias item for each included study. 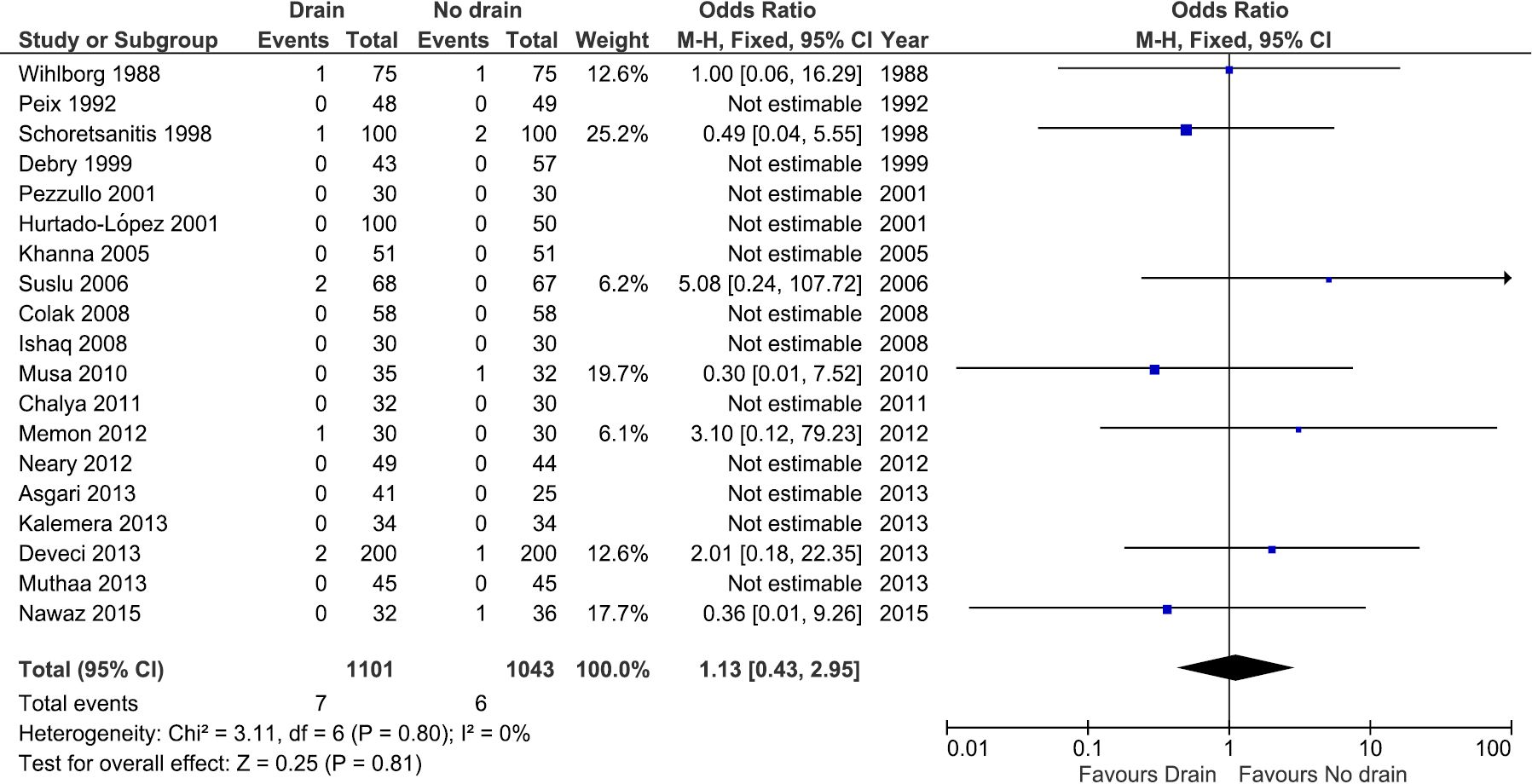 The increased risk of wound infection, the higher postoperative pain at POD1 and prolonged hospital LOS in patients with drain compared to those without drain were confirmed performing the meta-analysis either including only studies with low risk of selection bias and performance bias or comprising only studies in which patients with huge goiter or substernal goiter were not excluded (Table 2).

The increased risk of wound infection was not proved performing the meta-analysis either including only studies in which patients with coagulation disorder or anticoagulant therapy were not excluded or only studies with ≥100 patients per trial (Table 2).

No difference between two groups was found in term of reoperation rate, hematoma and seroma formation in the four sensitivity analyses (Table 2).

The funnel plot regarding the primary outcome of the present meta-analysis (reoperation for bleeding) did not suggest significant publication bias (Figure S1). 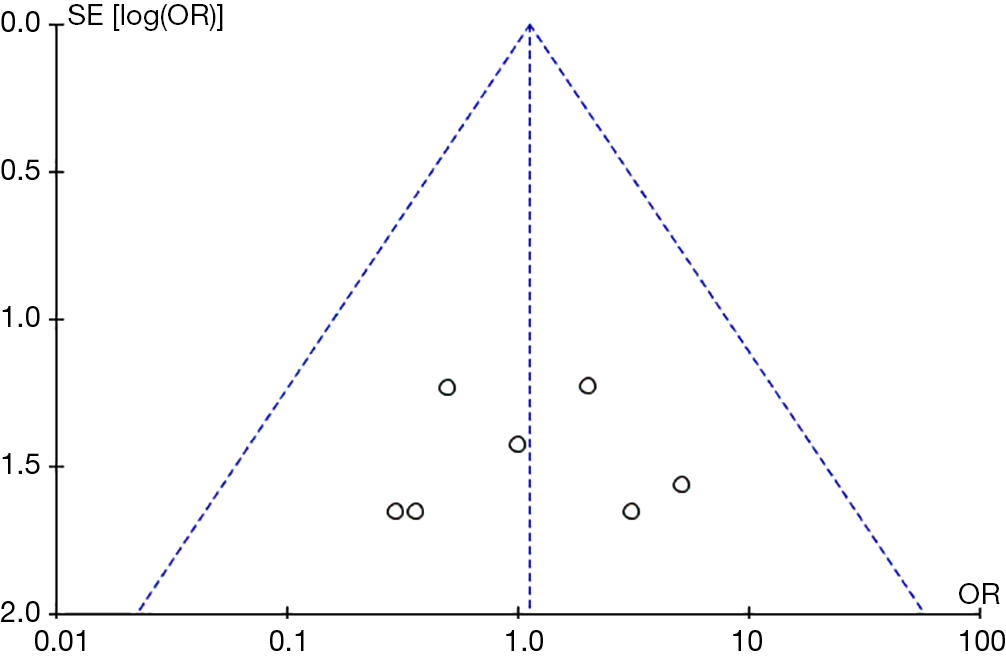 This systematic review and meta-analysis shows that the use of drain in thyroid surgery increase the risk of wound infection, cause higher postoperative pain and prolong hospital LOS, with no decrease of reoperation rate, hematoma and seroma formation. These findings are consistent with previous meta-analyses (1,2). However, including in the meta-analysis only studies with ≥100 patients per trial, no difference was found in term of wound infection between the two groups (drain versus no drain).

The absence of differences between the two groups in term of risk of reoperation for bleeding and risk of hematoma formation was confirmed also performing the meta-analysis including only studies in which patients with high risk of hemorrhage (i.e., coagulation disorders, anticoagulant therapy, huge goiter or substernal goiter) were not excluded (Table 2), and this support the safety of no use of drain after thyroidectomy or lobectomy.

Regarding the hospital LOS, patients without drain were sent home if there were lack of clinical evidence of any collection in the neck; instead in the drain group, the drain was removed when the output was low and patients were discharged without drain. Furthermore, as suggested by some Authors the presence of drains may increase the amount of fluid collection by their sole presence (9,11), even though the rate of seroma was not significantly different between the two groups. Thus, the presence of drain may influence itself the duration of hospital stay due to the need of monitoring the fluid drainage, with a demonstrated disadvantage related to the higher postoperative pain in these patients.

Limitation of the systematic review

Firstly, the results of the included RCTs may be influenced by the difficulty of blinding in case of drain usage, however the blinding of participant and personnel was considered adequate if the allocation was done immediately before wound closure, because this method guaranteed the blinding of the surgeon during the surgical procedure. Secondly, as reported by Rerkasem et al., the blinded outcome assessment is not always possible in RCTs of surgical procedures, and the allocation concealment is one of the most critical methodological factors in reducing bias (25). Of note, among the included studies some quality information were unclear (i.e., the random sequence generation in 15% of the studies, the allocation concealment in 35% of the studies, and the blinding of participants and personnel in 40% of the studies) and this may affect the results of the meta-analysis. However, a sensitivity analysis including only studies with low risk of selection bias and performance bias (10 studies) was performed, and the results were consistent with the findings obtained by including all studies. Thirdly, in 60% of the included studies the number of patients were <100, and there could be potential inherent biases due to the small sample size. Furthermore, as stated by Rerkasem et al., a single large RCT will usually produce more reliable evidence than a meta-analysis of multiple small RCTs (25). Interestingly, the sensitivity analysis including only studies with ≥100 patients per trial showed that the use of drain does not increase wound infection rate. Of note, on the basis of the pooled results of wound infection rate in both patients with (2.6%) and without drain (0.7%) after thyroid surgery, a RCT with a large sample size should be performed to identify a significantly clinical difference between two groups. Fourthly, only articles in English language were included.

The use of drain after thyroid surgery increase postoperative pain and hospital LOS, with no decrease of reoperation rate, hematoma and seroma formation. This meta-analysis suggests an increase wound infection rate in patients with drain, however a large RCT should be performed to confirm this finding.