Mastopexy is the 7th most performed cosmetic surgery in the US according to the latest American Society for Aesthetic Plastic Surgery (ASAPS) statistics (1). Extensive data in the literature show numerous studies in which a wide array of operative techniques are described. These range from a simple dermal manipulation, with or without glandular reshaping, to the use of dermal flaps fixed to the pectoral fascia, to the use of synthetic mesh or sheets. The use of an autologous (usually glandular) flap to increase the upper pole fullness can replace the use of an implant (2). Unlike, dermal reshape, the use of a glandular reshape offers a more durable result with less tension on scars. This concept is often referred to as “auto-augmentation”. The most common type of autoaugmentation is the advancement of an inferior based flap into a space created under the NAC superiorly based pedicle (3-7). The advantage here is that this mobilized gland, responsible for breast projection, does not interfere with NAC lift and vascularization which is still maintained on an independent superior pedicle.

The second type of autoaugmentation consists in advancing a superiorly or superomedially based glandular flap (8-10). The technique’s main advantage lies in the lower rate of bottoming out, since most of the breast weight is not lying in its inferior part.

We describe a technique based on a superior gland autoaugmentation. All patterns of skin excision can be used. The overlying skin of the superior pedicle is deepithelialized. It is then dissected off the prepectoral fascia in the cranial direction, until reaching the level of the supramammary fold. The key point consists in dividing the dermoglandular flap in the frontal plane in a caudal-cranial direction, reaching high enough to be able to rotate deep the posterior part of the flap and fix it high on the pectoralis fascia with two-three stitches of 2/0 absorbable sutures (Figure 1). Care is taken to keep the anterior flap thickness equal at least to 2 cm to avoid NAC necrosis. The anterior flap serves as support for segment III of the lifted breast, which is closed by tightening medial and lateral pillars. 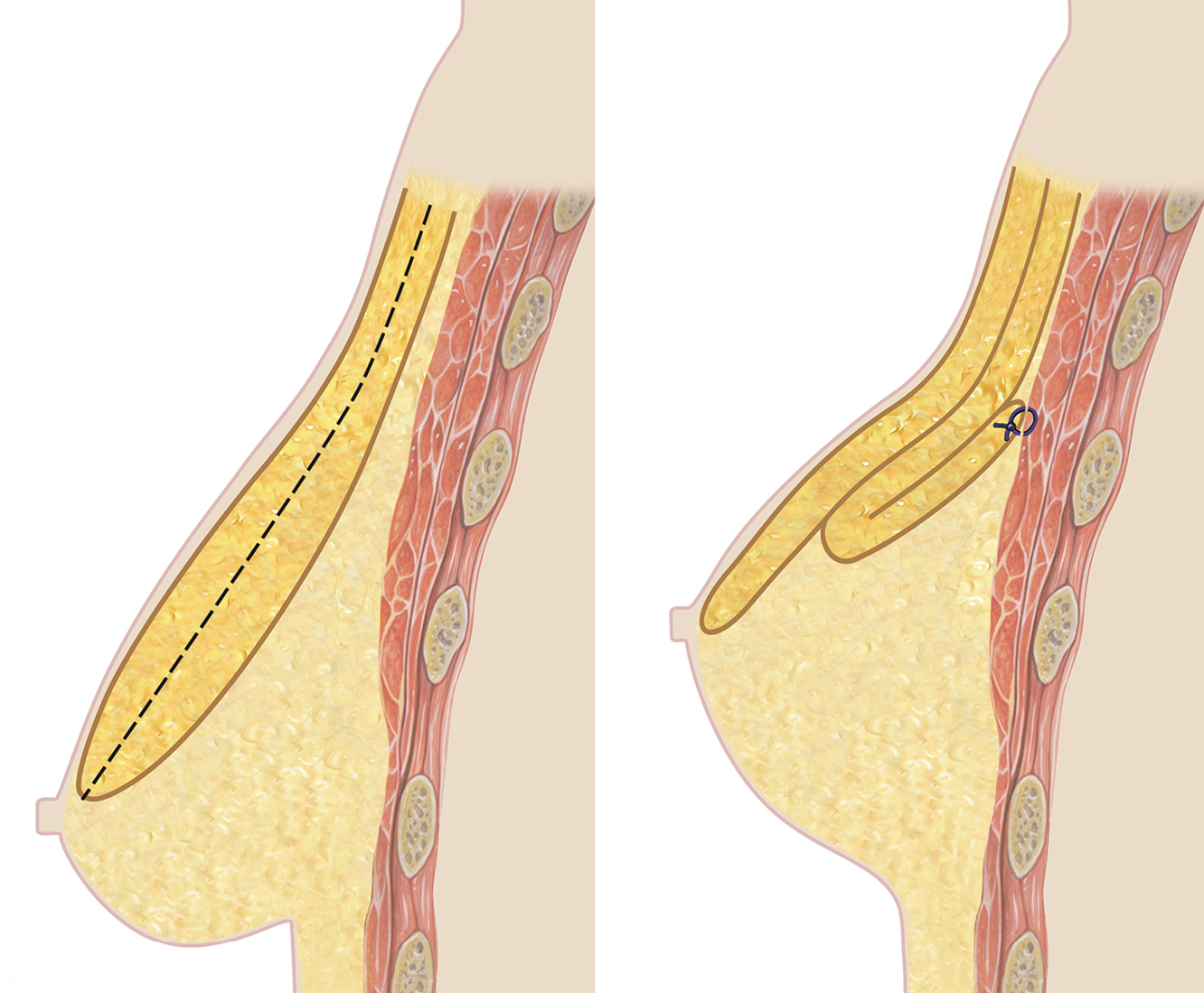 We have been using this simple and safe surgical technique in patients with mild to moderate degrees of breast ptosis with relatively thick parenchymal tissue, allowing a smooth cranial shift of the NAC while guarantying upper pole fullness, preventing bottoming-out of the breast, and permitting long term improvement in its shape and contour.