What adds Valsalva maneuver to hemostasis after Trendelenburg’s positioning during thyroid surgery?

Hemostasis is definitely a part of surgical procedure which is of utmost importance. Postoperative bleeding is one of the significant complications of thyroid surgery and is associated with significant morbidity and mortality, increased duration and costs of surgery and prolonged postoperative hospital stay (1). In case of postoperative bleeding, a possible airway compression can be hazardous. There are many methods advised to provide hemostasis intraoperatively, which have not been reported thoroughly in the literature (2). Trendelenburg’s positioning, the Valsalva maneuver and abdominal compression are some of these hemostasis control methods that may reveal bleeding vessels by increasing the venous pressure. The aim of the current study was to figure out whether controlling of further bleeding at the end of surgery with Valsalva maneuver and abdominal compression following Trendelenburg’s positioning has an impact on hemostasis in thyroid surgery in thyroid surgery.

This study included 68 consecutive euthyroid thyroidectomized patients, who had been operated under general anesthesia. All data was analyzed retrospectively from a prospectively collected data. Patients with known coagulopathy were excluded. All surgeries were carried out by the same surgeon (O Makay) or under the supervision of him. Our routine operative strategy for thyroid nodules was to perform a loboisthmectomy or a total thyroidectomy based on the results of preoperative tests, intraoperative exploration and frozen section analysis. Both lobes and the isthmus were carefully evaluated for the presence of any gross disease. Conventional standard ligation (clamp-and-tie) and electrothermal bipolar vessel sealing were used for hemostasis. Each patient was put through a serial protocol with three position and maneuver combinations. These were carried out in a conscious order just after completion of the surgical procedure without decreasing the anesthetic level. This protocol consisted of performing manual intraabdominal pressure increase and afterwards Valsalva maneuver to check hemostasis and treating any bleeding point identified after Trendelenburg’s positioning. The operating table was tilted 30 degrees for 1 minute and hemostasis was checked; manual abdominal compression on the epigastric region was carried out by the surgeon for 10 seconds, and finally the anesthetist was asked to increase the intrathoracic pressure up to 30 mmH2O. Hemostasis was re-checked and any bleeding was treated accordingly. All identified bleeding points and treatments were recorded on a chart, based on the study by Moumoulidis et al. (2). The surgeon was aware of the procedures performed.

Primary outcome measure was the detection of further bleeding points after abdominal compression and Valsalva maneuver in the Trendelenburg’s positioned patient. Secondary outcome measures were the demographics, final pathology, operation type and time, bleeding vessel size, and type and time of bleeding control. Due to its retrospective design, an ethical approval was not warranted according local regulations on clinical research during the time of the study.

All analysis was performed using SPSS Statistical Analysis software (release 17.0, Chicago, IL, USA). Quantitative data were presented as median values. Differences between the procedures performed in the supine position were recorded. Kruskal-Wallis test was used for comparisons of differences. A P<0.05 was considered significant.

There were 54 (79.4%) female and 14 (20.6%) male patients with a median age of 51.5 years (range 22–76 years) during the study period. No patient was excluded. Total thyroidectomy was carried out in 86.7% of patients. Median operation time was 90 min (range 45–180 min). A drain was used in only 11.8% of cases, which where complicated cases with a huge goiter and intrathoracic extension. There was no postoperative bleeding requiring surgical revision (Table 1). 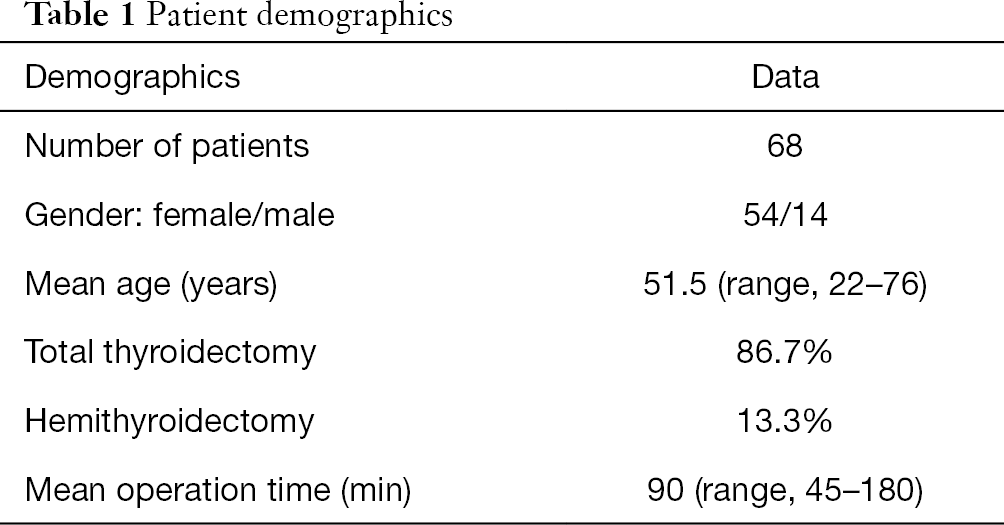 The total number of patients with bleeding after application of the protocol was 43 (63%). Nevertheless, the total number of detected bleeding points in these 43 patients was 104. The Trendelenburg’s position alone identified 49 (47%) bleeding points. The introduction of abdominal compression to patients in the Trendelenburg’s position, increased this rate only to 60.5% (P>0.05). Valsalva maneuver increased the detection of new bleeding points, when compared to abdominal compression alone (41 vs. 14, respectively, P<0.05). The results can be seen in detail in Table 2. 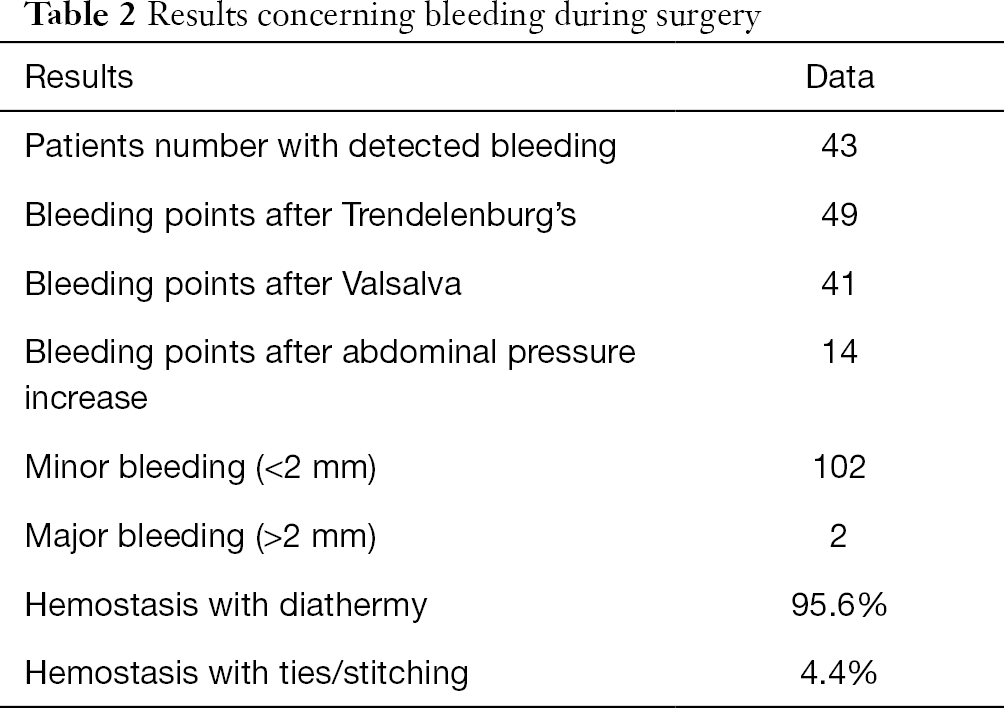 All bleeding points, except 1 for Trendelenburg’s positioning and 1 for Valsalva manoeuvre, were minor (<2 mm). In all, except 1 bleeding vessel during Trendelenburg’s position and 3 vessels during Valsalva maneuver, hemostasis was carried out with using diathermy. Only 4.4% bleeding vessels required ties or stitching. The median time taken for meticulous hemostasis was 8.8 seconds.

This study reports the outcomes concerning further bleeding with certain maneuvers during hemostasis at the end of surgery of the thyroid patient. Increased venous pressure has been suggested to help control the bleeding. This study shows the correctness of this situation. Postoperative bleeding continues to be a rare, but potentially life-threatening complication in thyroid surgery. Early recognition with immediate intervention is the key to the management of this serious problem (3). Therefore, intraoperative detection of possible bleeding points is of utmost importance.

Valsalva maneuver is associated with increased intra-abdominal pressure and hemodynamic changes, including an increase in blood pressure (6). It is believed that Valsalva maneuver helps controlling hemostasis during surgery by increasing the pressure in the internal jugular vein by enhancing venous return (7). Nevertheless, there are some limitation factors for Valsalva maneuver, since an increased positive expiratory pressure is warranted. This may lead to pneumothorax. Therefore, it is advised that this maneuver should not be continued for longer than 1 minute (2). It is known that the venous pressure in the jugular veins increases with the addition of the Valsalva maneuver to the Trendelenburg’s positioning (8). In this study, we indicated that Valsalva maneuver was effective in detecting further bleeding sites in Trendelenburg’s position, since it increased the number of bleeding sites from 47% to 86.5%.

Abdominal compression is a very simple method to perform intraoperatively. Abdominal compression, applied when the patient is in the Trendelenburg’s position, will lead to an increase in venous pressure in the jugular veins. Increased venous pressure helps to determine the likelihood of bleeding vessels (9). Performance of manual abdominal compression detected only 14 (13.5%) of the bleeding vessels and increased Trendelenburg’s positioning rate from 47% to 60.5%, which was not of a significant importance. Although its additive effect is low during hemostasis, it might be an alternative method for the patient where it is not able to perform the Valsalva maneuver.

In recent years, the use of drains after thyroid surgery has been questioned (10-13). Drainage does not lower the risk of a postoperative hematoma. Meanwhile, an obstructed drain line will result in an obscured life-threatening incidence. We prefer not to use drains after uncomplicated thyroidectomy operations. Herein, we used drains in only 8 out of 68 patients, who had retrosternal extensions of their thyroid tissues.

Unfortunately, there are some limitations. The main weakness of the present study is the limited number of patients. No data can be offered related to a control group, since there is none. Nevertheless, it is very difficult to standardize the abdominal compression applied to the epigastric region. Additionally, the surgeon was aware of the procedures performed. Finally, since all pronounced techniques result in an increase of the venous pressure and are expected to be related to venous bleeding, differentiation between an arterial bleeding and a venous bleeding was not made.

To conclude, although nearly all detected bleeding points were minor, Valsalva maneuver helped to detect any further bleeding following Trendelenburg’s positioning. Manuel compression had a minor additive effect. Although we cannot anticipate our conclusions to other techniques, we believe it is worth mentioning that some technical refinements make thyroidectomy safer. For that reason, we advise mimicking conditions like extubation and awakening process, just to be sure there is no bleeding. Our suggestion is to give patients routinely the Trendelenburg’s position and continue with the Valsalva maneuver during hemostasis after thyroidectomy.

Ethical Statement: Due to its retrospective design, an ethical approval was not warranted according local regulations on clinical research during the time of the study.