Thyroid surgery is considered a clean procedure for the absence of microbiologic contamination of the surgical field with a very low rate of surgical site infection (SSI), estimated in literature around 0.3% and 0.6% (1,2). For this reason, antibiotic prophylaxis (AP) in this type of surgery is not suggested routinely by most national and international guidelines (3).

By definition, clean surgical procedures are those in which there is a low risk of wound infection prior to surgery; during surgical procedure, it is attempted to maintain the sterility of the wound after the surgical wound is closed and medicated, it is never again exposed to direct contact with bacteria flora (3,4). In these circumstances, the probability of postoperative SSI is estimated to be less than 5%. In the clean surgical procedures, the risk of postoperative infection increases when the sterility rules are not respected during and after surgery; the bacteria commonly involved in wound infection are Staphylococcus aureus and other skin contaminants.

Because in the standard surgical procedure the oral mucosa is not touched, AP needs to cover only gram-positive skin flora, mainly saprophytic microorganisms, first of all Staphylococcus epidermidis and Staphylococcus aureus.

Despite these principles, many surgeons in the worldwide use routinely AP in thyroid surgery.

This attitude may be dangerous because it encourages an incorrect use of antibiotics and consequently increases the possibility of arising antibiotic resistances and finally increases costs.

Worldwide antimicrobial resistance is becoming one of the most cause of the failure of therapies in many human infections. To try to prevent the appearance of infections difficult to treat with standard antibiotic therapy, many guidelines for rationale and appropriate use of AP in surgery have been studied.

To underline the current evidence for the use of AP in thyroid surgery, a comprehensive review of recent literature has been performed, including an accurate MEDLINE (PubMed) search. The “Medical Subject Headlines” terms were “antibiotic prophylaxis” and “thyroid surgery”. We considered all relevant studies in English from 2007 to 2017. Below are shown in Table 1 the inclusion and exclusion criteria used in the study (Table 1). 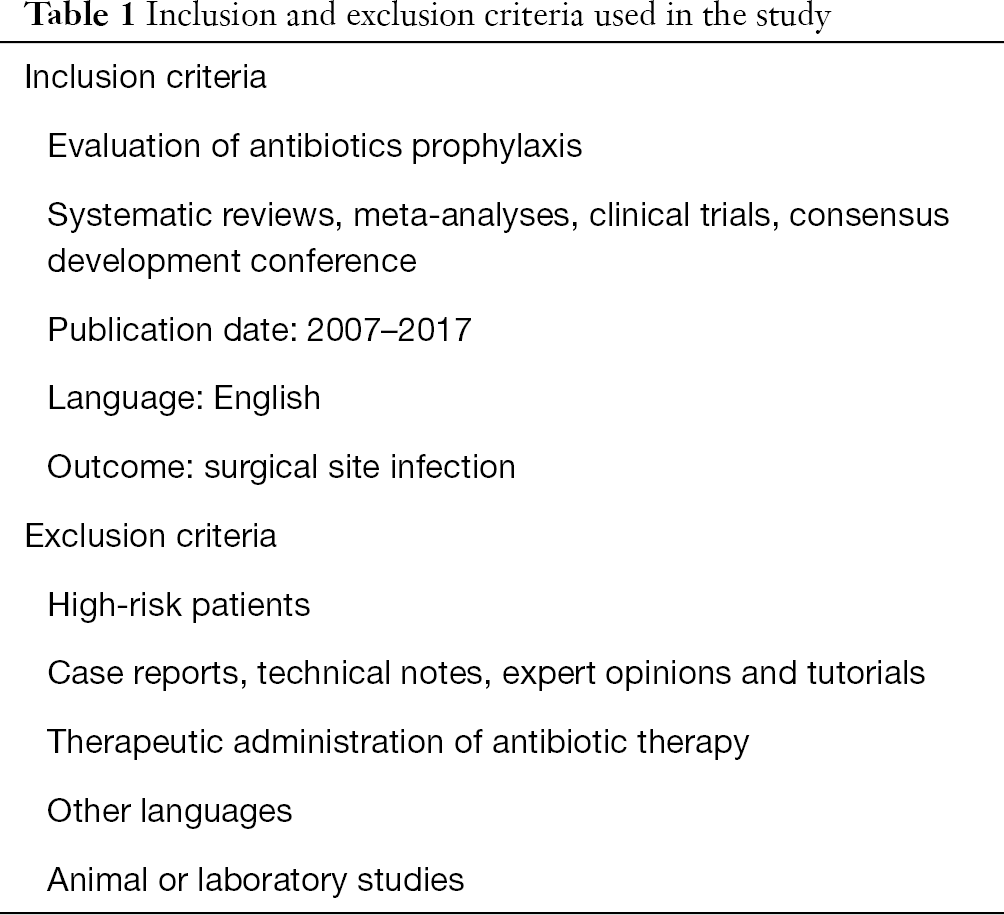 The routinary introduction of AP has reduced the significative incidence of wound infection after head and neck surgery, especially those that include the incision of the oral mucosa.

Thanks to the reduction of surgical wounds, the time of hospitalization and generally the costs associated with the treatment of infections are also reduced.

Principles of a proper use of AP include providing optimal and effective dosing of antibiotics at the time of surgical site exposure and valid prophylactic regimens. Selecting criteria of the antibiotic scheme should largely be based on anatomical location of the surgical incision, type of bacterial generally present on the surgical site, type of surgical procedure and patient characteristics.

Many antibiotics need a single dose given within 60 minutes of skin incision to offer an adequate tissue concentration throughout the surgical procedure. An additional dose of antibiotic should be given to the patient if the surgical period is extended (surgical time double the half-life of chosen antibiotic), major blood loss happens, or it is used an antibiotic with a short half-life. The antibiotic should be discontinued 24 hours after surgery, as the prolonged use (over 24 hours) is to be considered antibiotic therapy and not yet AP (5).

However, many surgeons follow the custom of using AP during thyroid surgery, with the conviction that this will shield the wound from SSI. Increasing clinical evidence suggests that antibiotics are not necessary to prevent wound infection (6-8).

In 2013, Italian associations UEC (Italian Endocrine Surgery Units Association) performed a study to detect the postoperative complications in 2,926 patients who underwent thyroid surgery in one of the 38 national centers of endocrine surgery. AP was performed in 1,132 surgical procedures (38.7%). Cephalosporins or aminopenicillins ± beta lactamase inhibitors were the most used therapeutic schemes in the study. The SSI rate was 1% (28 patients). De Palma et al. have shown that infection rate in thyroid surgery was 1%. The use of an AP was not associated with a protection from these infections, the study confirms that AP is unnecessary in thyroid surgical procedures (9).

Dionigi et al. reported an infection rate of 2% after 241 thyroid surgical procedures and concluded that preoperative antibiotic administration did not affect the incidence of SSI (10).

Dionigi et al. also evaluated the role of early discharge in the development of SSI after thyroid surgery. In the prospective analysis of 112 consecutive patients undergoing 1-day elective thyroidectomy, the postoperative incidence of SSI was 2.6%; the rate was similar to the SSI found after thyroidectomy performed in an ordinary recovery (>24 h). The authors concluded that the importance of a mild, correct and scrupulous technique of the surgical team as well as the general conditions and comorbidity of the patient must be accentuated compared to the use of inadequate AP. Great attention should be given to improve sterile surgical technique especially during clean surgical procedures (11).

To stress these results, the therapeutic guidelines of the American Society of Health-System Pharmacists doesn’t suggest AP for clean surgical procedure of the head and neck in either adult or pediatric patients, but with a level B of scientific evidence (level IV–VI) (12). Nevertheless, through careful literature search we found that what happens in current clinical practice is very different.

In a large multicenter study realized in Italy in 2012, the rate of AP use was 38.7% (13). Studies conducted around the world show similar results, most surgeons in China follow the custom of using AP following thyroid surgery (57.4–100% of the patients), with the hope that this will give more protection to prevent the wound infection (14). In China, the benefits of non-routinary using of AP were supported by clinical evidence in a recent study published by Qin et al. (15). A total of 1,030 patients were enclosed in the study with a 0.09% SSI rate. The authors emphasized the importance of paying attention to factors that may cause surgical infection, as we have already seen in the Italian study. Risk factors for SSI can be classified as patient or surgical characteristics.

If we observed the factors associated to the patients, increasing age, over 65 years, predicts a higher risk of SSI independent of other comorbidities. Any comorbidity further increases perioperative morbidity. Regarding the surgical-related factors, they have found that the quality of the surgical technique remains the most important determinant, while most SSIs are attributable to patient-related factors rather than imperfect surgical care (15).

Unfortunately, the routinely and inappropriate use of AP is still common for clean thyroid surgeries at most medical institutions also in Japan and in many other countries (8-17). To underline how this practice does not have a solid scientific basis, a recent Japanese prospective randomized trial was published to validate the safety of clean thyroid and parathyroid surgery without AP. A number of 2,164 patients were enrolled in the study, who underwent a thyroid or parathyroid surgical procedure for disease, and were divided into three groups. The first group was treated with piperacillin sodium as prophylaxis, the second group received cefazolin sodium and the control group did not receive any prophylaxis. In the study the frequency of wound infection was very low, at only 0.09% in the AP group and 0.28% in the control group, and no significant difference was demonstrated among the three groups. They concluded that AP is unnecessary to forestall SSI after surgery for thyroid or parathyroid diseases (18).

Thyroid surgery has been undergoing major changes in the last few years linked to the introduction of new suture materials and new devices that contribute to decreasing the frequency of ligation, intraoperative blood loss and the time of operation. All these changes, improving the surgical technique, further have reduced the risk of postoperative SSI.

The improvement in surgical technique with the introduction of minimally invasive thyroid surgery has also reduced the risk of postoperative wound infections and the need to administer AP. This has been shown in the last years by several studies published in literature. In a well-designed prospective randomized surveillance study, Dionigi et al. (6) investigated the rate of wound morbidity (WM) after thyroidectomy performed with minimal access [video-assisted thyroidectomy (VAT)] compared to conventional thyroidectomy. The rate for SSI was significantly lower in the group treated with video-assisted thyroidectomy (n=1) than in the group treated with conventional surgery (n=8) (P<0.05). The incidence of SSI was 5.3% after conventional thyroidectomy and 0% after VAT (P<0.05). In the wound infection the microorganism involved most often has been Staphylococcus aureus. All wound infections became manifest after patient discharge.

The explanations of the reduction of the risk of wound infections in the minimally invasive thyroid surgery can be summarized as follows. Endoscopic surgery is less traumatic than open surgery because the surgical incision is reduced, tissue manipulation is minimal, there is a less tension of the skin margins and limited number of sutures. In the studies on human immunity, it has been observed that patients undergoing endoscopic surgery maintain a better specific and nonspecific immunity rather than patients undergoing conventional surgery. It was demonstrated that minimally invasive surgical procedure had fewer immunosuppressive effects than traditional surgery due to less marked proinflammatory response and maintained immune system function, resulting in a reduced incidence of SSI (20,21).

The new endoscopic technique not only reduces the risk of infections and makes the AP not necessary but also reduces operative time, postoperative pain and improves cosmetic result (22).

Minimally invasive surgical techniques have been developed and applied by many institutions worldwide, and numerous novel techniques of remote access surgery have been proposed and actively performed.

The development of thyroid surgery through remote extracervical access such as axillary, breast, retroauricular and natural orifice accesses may instead require the use of AP justified by increase in time, surgical trauma and dissection area (23,24).

It turns out to be necessary AP in case of transoral thyroid surgery that is an emerging experimental alternative to conventional surgery. This new endoscopic technique involves the removal of the thyroid from the mouth with contamination of the operative field.

The oral microbial flora includes anaerobic bacteria such as Actinomyces, Bacteroides, Bifidobacterium, Eubacterium, Fusobacterium, Lactobacillus (25) and fungi (Candida, Cladosporium, Aspergillus, Fusarium) (26). An efficient innate immunitary system steadily monitors the bacterial colonization and avoids bacterial invasion of local tissues. However, the vestibular access during transoral thyroidectomy determines a new communication between the oral cavity and neck. Good oral and dental hygiene can prevent possible postoperative infective complications. Therefore, it is suggested that a preoperative oral/dental assessment be completed by a specialist and it is suggested an appropriate use of AP. Amoxicillin/clavulanic acid is proposed as a preoperative prophylactic antibiotic. Some authors suggest extending the antibiotic for five days postoperatively orally (as antibiotic therapy) (27-31).

In conclusion, thyroid surgery is considered a ‘‘clean’’ procedure, and AP is not indicated, except in the transoral approach that it could be considered a “clean-contaminated” procedure. The importance of preoperative patient preparation, the respect of asepsis rules and scrupulous technique of the surgical team as well as age, general health and comorbidity of the patient must be underlined. Appropriate use of antibiotic therapy is indicated when a wound infection arises in the postoperative period.