Hypoparathyroidism is a common complication following bilateral thyroid surgery. Temporary hypoparathyroidism occurs in approximately 10% to 30% of patients, whereas permanent hypoparathyroidism rates are much less common being reported in 1% to 3% of patients (1). The risk of hypoparathyroidism increases with the extent of thyroidectomy, completion thyroidectomy, reoperative procedures and central neck clearance (1,2). Parathyroid identification and preservation is the mainstay of safe thyroid surgery. Efforts should be made to identify intraoperatively all four parathyroid glands. Use of a meticulous surgical technique and dissection close to the thyroid gland aiming at preservation of the intact blood supply to the parathyroids, and keeping away from unnecessary manipulation of parathyroids in due course of the dissection are well established factors contributing to the reduced prevalence of temporary and permanent hypocalcemia (1). However, if the parathyroid glands are damaged, autotransplantation should be undertaken to preserve their function. Implanted glands have a more predictable survival compared to devitalized glands that are left in situ (3).

In general, parathyroid transplantation can be considered in three distinct modes of application:

This paper is aimed to provide a review of current status of various parathyroid transplantation techniques in thyroid surgery.

In 1975, Wells et al. reported on a successful parathyroid autotransplantation in a large cohort of patients undergoing parathyroidectomy with a transplant success rate of 93% (4). This study opened the way for further interest in reimplantation as an effective method of preservation of parathyroid function not only in parathyroid surgery but also in thyroid surgery, and especially in patients undergoing total thyroidectomy. Parathyroid autotransplantation soon became a widely accepted technique in head and neck surgical oncology and endocrine surgery as an effective way to reduce the risk of permanent postoperative hypocalcemia (5).

Parathyroid autografts can be placed heterotopically in a brachioradialis muscle or in the sternocleidomastoid muscle. However, the latter one is preferred during thyroid surgery, as additional incision can be avoided and because measurement of parathyroid hormone (PTH) gradient is not necessary afterwards (1). Before autotransplantation, a frozen section of a small fragment of the parathyroid gland should be made, particularly in patients operated for thyroid malignancy (13). Different methods of parathyroid autotransplantation have been described including the techniques of slicing, mincing, and injecting a solution of suspended parathyroid tissue in saline into the muscle (14). The widely accepted technique for hyperplastic parathyroid tissue reimplantation was described by Wells et al. (4). Parathyroid tissue should be stored for a while in a chilled saline soon after excision. After cooling for 30 min, the parathyroid glands become firm and can be easily sliced into 1-mm pieces or 1 mm × 1 mm × 1 mm cubes. In generally, 10–20 pieces should be inserted into separate muscle pockets of the brachioradialis or sternocleidomastoid muscle (Figure 1) (4). This technique allows to minimize the chances of graft malfunction. Any intramuscular hematoma formation may compromise the graft acceptance. Gauger et al. reported that an injection of a parathyroid tissue suspension in saline was as effective as sectioning or mincing of parathyroid gland for autotransplantation in patients undergoing thyroid surgery (15). Most patients after parathyroid autotransplantation require temporary oral calcium and vitamin D supplementation and close biochemical monitoring of serum calcium for 2–4 weeks following surgery. Utilizing such an approach markedly decreases the incidence of permanent postsurgical hypoparathyroidism (6,9). In the majority of published series, proof of successful parathyroid autotransplantation during thyroid surgery has been recognized based on the maintenance of normocalcaemia without need for life-long calcium supplementation after experiencing a short-term period of postoperative hypocalcaemia (16,17). However, in more recent papers it was also confirmed by PTH serum level measurements in peripheral blood (10,15). 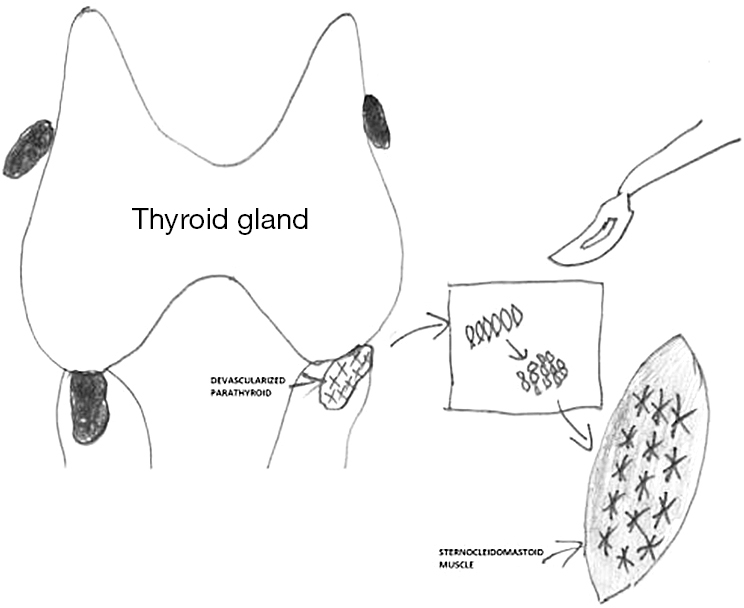 Figure 1 Intraoperative autotransplantation of devascularized parathyroid gland using a slicing technique and reimplantation of small pieces of tissue into separate muscle pockets of the sternocleidomastoid muscle during thyroid surgery.

The parathyroid tissue obtained during thyroid surgery is fragmented into 30 to 40 small pieces of 1 mm × 1 mm × 1 mm. The pieces should be kept sterile and put into the chilled saline. Then the supernatant is decanted and usually 8–12 tissue pieces are placed into each vial. Then the containers are deposed in the freezing medium. The use of a standardized cryopreservation method is crucial for preserving graft functionality. The most commonly utilized freezing medium is 80% Roswell Park Memorial Institute (RPMI) 1640 solution (21). The purpose of the freezing procedure is to preserve cellular integrity and function by gradually changing the temperature. Hence, the tubes should be cooled gradually, prior to transfer for a long-term storage. Detailed description of a cooling technique is out of the scope of this publication and can be found in the published literature (22). However, it is important to underline that the most important step for this stage of the process is gradual cooling by −1 °C per minute (22). Once the tubes are cooled, they are put into a liquid nitrogen freezer and stored at temperatures between −170 and −196 °C (22).

Once the parathyroid tissue pieces are thawed and washed at body temperature few times, they are ready for grafting (23). The non-dominant forearm of the patient is the best site for the parathyroid tissue autotransplantation. Reimplantation is usually undertaken under local anesthesia. Having made surgical incision on the forearm, using a blunt dissection technique, 10–20 individual muscle pockets are created in the brachioradialis muscle and into each of them 1–3 parathyroid graft fragments are reimplanted (23). Caution must be exercised not to cause any hematoma within the intramuscular pockets, which may worsen the vitality of transplants (23).

From the very beginning it was clear that major histocompatibility complex (MHC) class I and II antigens are expressed on parathyroid tissue limiting ability of direct grafting. In the initial animal studies immunosuppression used after parathyroid tissue allotransplantation reduced the risk of graft rejection to less than 17% compared to 100% rejection rate in animals left without immunosuppression (24). In 1975 Wells et al. published outcomes of parathyroid allograft transplanted within family members who had previously received a kidney transplant and during a 30-month follow-up the graft remained functional (4). In the subsequent years many such transplantations with varying success rate were reported in the literature (3,25). However, taking into consideration the side-effects of life-long immunosuppression this treatment is hardly acceptable for a relatively indolent disease as iatrogenic permanent hypoparathyroidism. Almost a half of parathyroid tissue is composed of non-endocrine and highly immunogenic cells. Human leucocyte antigen (HLA) class I antigens are poorly expressed on parathyroid cells, and are not involved in the induction of the process of host versus graft rejection. Hence, successful and long-term functioning parathyroid allograft is possible when the transplant is free of antigen-presenting cells strongly expressing HLA class II antigens. Thus, allotransplantation of cultured parathyroid cells, but not parathyroids tissue allows for elimination of lymphocytes, macrophages, granulocytes, which represent so called “passenger cells” and endothelial cells presenting HLA class II antigens, responsible to much extent for graft rejection. This innovative method of parathyroid cells culture preparation for allotransplantation without immunosuppression was developed by Woźniewicz et al. (26).

First in the World successful cultured parathyroids cells allotransplantation in humans without immunosuppression for permanent hypoparathyroidism was undertaken by Tołłoczko et al. in Warsaw, Poland in 1990 (27). In 1995 this group reported a series of 18 patients with postoperative parathyroid insufficiency (after thyroid operations) who were treated with cultured, hormonally active, living and ABO the same group type parathyroid cells. Explants had been taken from two operated patients with secondary hyperparathyroidism. Hormonal activity of the transplanted parathyroid cells under the fascia of the brachioradialis muscle had been confirmed by clinical, biochemical tests and the level of PTH in blood serum from the vein of non-grafted arm. Hormonal activity of the graft was variable but lasted up to 14 months (27). In 2007, Nawrot et al. presented encouraging clinical outcomes of parathyroid cells allotransplantation for surgical hypoparathyroidism in a series of 85 patients and described a modified technique of preparing the parathyroid grafts using in vitro breeding (28). The method allowed for obtaining a new parathyroid cell population with a limited expression of immunogenic antigens. As a result of 6 weeks of breeding and freezing, the parathyroid cells markedly decreased their normal HLA class I antigen presenting cells expression and were free of HLA class II positive cells. In this study cells grown using that procedure were allotransplanted without immunosuppression. Sixty patients underwent one allotransplantation, while 25 patients had a repeat grafting. The cellular allografts remained functional for the mean of 6.35±13.08 months. In 64 patients (55.1%), the allografts remained functional for more than 2 months (28). This study protocol served as a basis for development of a clinical protocol of allotransplantation of cultured parathyroid cells which had been finalized in 2015 and this procedure is nowadays reimbursed in Poland by the National Health Fund. In the years 1990–2016 a total number of 316 parathyroid allotransplantations and redo allotransplantations were performed in Warsaw, Poland (personal communication, data not published). Objective improvement considered as increase in serum PTH level and normalization of serum calcium level allowing for decreased in substitution with oral calcium and vitamin D3 was observed in 55.1% of patients. In addition, 34.5% grafts remained functioning within 1–6 months, 10.2% within 6–12 months, 6.2% within 12–24 months, and 1.9% within 24–127 months, respectively. Remarkable improvement in patient quality of life was observed in patients with permanent hypoparathyroidism who had properly functioning graft following allotransplantation, which allowed for majority of them to return to normal professional and social functioning (personal communication, data not published). In case of immediately non-functioning graft or function withdrawal there is still an option of redo allotransplantation as this method is minimally invasive and free of any adverse effects. Hence, in XXI century cultured parathyroid cell allotransplantation without immunosuppression is an alternative in selected patients to substitutive treatment for permanent postoperative hypoparathyroidism. However, it must be emphasized that it is still not widely available. Further research in this area is aimed to develop mechanisms for improvement in graft survival. It was hypothesized that the combination of cultured parathyroid cells and microencapsulation could make parathyroid allotransplantation even a more successful procedure in the management of permanent symptomatic hypoparathyroidism (25,29). Many animal experiments with long-term follow-up have shown that the concept of microencapsulation is effective. However, it remains unclear if the microcapsules prevent immunization itself or rather by the protective effect of tissue separation from the immune response. Nevertheless, it was reported also in humans that using such a combined technique allows for maintaining the functionality of the graft for at least 20 months without requirement of endovenous calcium supplementation (29).